Even within the USA, the subprime crisis initially only hit certain economic regions. An examination of the trade relations between the states documents the role of trade in their subsequent US-wide expansion.

The 2007-2009 financial crisis began with the US real estate crisis and swept across the world economy. Not only across countries, but also within large countries, there are considerable differences in how quickly and how strongly a crisis spreads. During the financial crisis, for example, unemployment in the USA spread across the entire country, after initially only boom regions where real estate prices and consumption had previously risen particularly sharply fell. What mechanisms promote the spread of such shocks to an entire economy? What role does trade play?

How did trade links influence the spread of the subprime crisis?

Using the example of the financial crisis in the USA, Sebastian Stumpner examined how the trade ties contributed to the spread of an initially regional slump in demand.[1] At the beginning of the crisis, unemployment rose above all where the real estate bubble burst early, households were heavily indebted and therefore had to restrict consumption particularly severely. After that, unemployment increased across the country. Trade between states played an important role in the spread of the crisis.

In order to demonstrate the importance of trade for the spread of the recession, the economist used the differences in trade interdependencies. Some industries in one state exported heavily to other regions that were particularly hard hit by the real estate crisis. Others, on the other hand, exported to less affected sales markets with still good economic activity. The comparison of these industries makes it possible to separate the role of trade from other channels of spread such as a credit crunch. The researcher uses data from official statistics on trade flows between the US states. These include direct trade in end products for consumers as well as deliveries of intermediate products in the value chain.

For every industry in every US state, Stumpner calculates a measure of the collapse in trade demand. This measure results from a weighted average of household debt within the US states before the crisis. Because in regions where house prices rose sharply during the real estate bubble, homeowners were able to take on new debts and thus finance particularly strong growth in consumption. These new debts were secured with the higher value of their homes. Regions that benefited from a boom in demand from heavily indebted consumers before the 2007 crisis were hit by a particularly sharp drop in demand when property prices fell. Industries that traded extensively with such regions therefore saw their trade demand decline much more sharply than others.

Quantification of the employment effects of collapses in trade demand

The main finding of the study is that trade plays an important role in driving the spread. If an industry exports particularly heavily to other states, whose demand has collapsed due to the real estate crisis, employment growth in this industry will decline significantly more than in industries whose trading partners were largely spared the crisis. The empirical estimates show that employment growth in an industry falls by an average of 2.9 percentage points if it is affected by an above-average decline in trade demand (by one standard deviation). After employment fell by an average of 8 percent between 2007 and 2009, this decline is economically significant. Overall, around 18 percent of all differences in employment growth in the sectors and states under consideration can be traced back to differences in trade links.

Does this connection only apply in crises or over the entire business cycle? Figure 1 shows how an above-average trade demand shock affects employment growth over a ten-year period. The vertical lines represent important events before and during the financial crisis: (i) the height of the housing bubble; (ii) the bankruptcy of the investment bank Lehman Brothers in September 2008; and (iii) month in which the US unemployment rate peaked at 10 percent. By the end of 2007, industries that delivered above average in states whose demand was expanding due to the real estate boom benefited. Thanks to the positive trade shock, these sectors were able to increase their exports particularly strongly and thus achieve high employment growth. 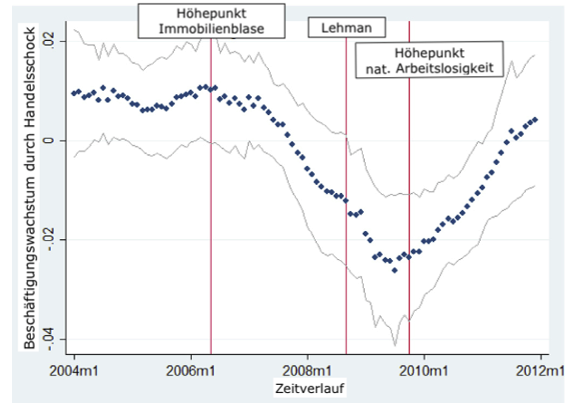 Great importance of trade for the transmission of economic fluctuations

After the real estate bubble burst, this effect was reversed and turned into a negative trade shock. The heavily indebted states slid into recession and suffered a sharp drop in demand. This was particularly fatal for those states whose export-oriented industries had particularly strong trade ties with the regions affected. Declining exports led to job losses there and thus contributed to the rise in unemployment. As the real estate crisis subsided and the recovery began in 2009, the negative trade shock weakened again and finally disappeared entirely. With rising exports, employment growth was also able to recover.

The results show that the trade links between the states play an important role in the transmission of economic fluctuations. They contributed significantly to the spread of the recession during the financial crisis. The financial crisis also led to an increase in unemployment in other states, which had intensive trade relations with the regions affected. Conversely, they were able to benefit more than average in the preceding boom.

*This article was written as part of the Next Generation project of the University of St. Gallen and published in German on April 21, 2021 on Ökonomenstimme. The “Next Generation” initiative encourages young scientists, decision-makers and the public to inform them about new scientific findings. The best students summarize the results of selected publications in leading economic journals. These empirical and theoretical foundations find their way into politics and business in a clear and well-processed, short form, where they are also used as decision-making aids. Further information on the project and current contributions can be found on the website of the University of St. Gallen.

[1] Sebastian Stumpner (2019), Trade and the Geographic Spread of the Great Recession, Journal of International Economics 119, 169-80.