The published opinion contradicts the real public opinion more and more. But critics of the media are repeatedly accused of adhering to “conspiracy theories.” Nobody speaks of a conspiracy – on the other hand, a structural shift to the left of the mass media can be observed. A team of international media researchers has now provided empirical figures that clearly validate this observation.

Many citizens repeatedly experience that “the experts” and “science” contradict common sense. In the formats of public service broadcasting, so-called experts regularly have their say, who disseminate clear untruths and pass this off as a scientific consensus. For example, “right-wing extremism experts” keep claiming that a so-called “shift to the right” is taking place in the Federal Republic of Germany, while radical left movements such as Black Lives Matter and gender ideology are celebrated in the same media and at the same time completely legitimate criticism of political experiments such as mass migration is placed in a right-wing extremist corner.

But alongside this value and activist science, which is dedicated to the interests of the transnational elite, there are still real researchers who are committed to the search for the truth and who do not allow any political ideologies to dictate the desired result. For example, the internationally renowned data analyst Emil O. W. Kirkegaard from the Ulster Institute for Social Research and his colleagues Dr. Jonatan Pallesen and Dr. Noah Carl, who published a study in the English-language Journal of Psychological Research in July 2021 with the title The Left-liberal Skew of Western Media.[1]

The method of study: The researchers collected data to classify the political views of journalists from countries like Germany, Denmark and the United Kingdom – including their preferred political parties. On this basis, they analysed the products of the reporting en masse and classified which topics the journalists sympathize with and which they report mostly negatively. From this data, the researchers were able to work out the political direction in which media reporting in the various countries is tending and which direction they tend to reject (Chart 1). 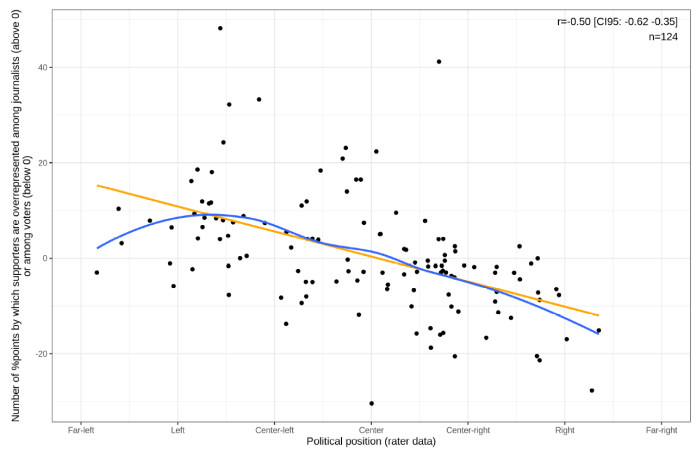 In order to understand the causes of this development, we have to look at post-war European history: After the Second World War, no political ideology to the right of the bourgeois centre was able to establish itself in Western Europe, while left-wing ideologues enjoyed an upswing, especially in the wake of the 1968 revolution. The horrors of national socialism had robbed all right-wing worldviews of their justification, while the real existing Eastern Bloc socialism served as an occasion for Western intellectuals to further develop marxist and other left theoretical models and either against the “undesirable developments in the East” or entirely in the spirit of the Soviet rulers ( for example in the case of the »K groups«).[3]

At the latest with the successful “March through the Institutions” and the rise of the Greens, the left cultural revolutionaries had achieved important sub-goals; Since then, it has been taken for granted in Western nations among intellectuals and academics to be left-wing. In their eyes, “right” is the populist mob at most, and “liberal” is a completely interchangeable label that a left-progressive newspaper like the German “taz” likes to promote, while orthodox marxists like the “analysis & criticism”, but also apparently “normal” organizations like the Greens Youth still like to polemicize against “white bourgeois” people. And as the statistics show, it is precisely these milieus whose children become journalists and media scholars – while conservatives often go the “stable” path and get by with law, medicine or engineering, but have no influence whatsoever on the development of public opinion.

How to create balance?

Some think that this development could be counteracted by blaming the public service media and newspapers at every opportunity that they have slipped too far to the left and should turn back again. The problem with this approach: the actors in the media houses, the left-wing journalists and directors, will certainly not vacate their posts just because part of the audience complains. On the contrary – they will continue to increase the compulsory levies and only superficially pretend to be a bit of “neutrality” in order to just about comply with the legal requirements. However, nothing fundamentally will change in this way.

The only effective way to counter the shift in the media to the left is something that many people do not believe is possible: it takes a strengthening of conservative and right-wing media with genuine journalistic standards and a professional background. The big problem here is that this niche in the market has already been discovered by the usual suspects from the establishment, and so it is teeming with seemingly oppositional opinion papers, which in the end do not bring about any real change, but always pretend it to their readers. In the spirit of: Read our slightly “better” version of mainstream journalism and be satisfied with it.

Action against the left shift

Independent media like the German “konflikt Magazin”, on the other hand, claim to really change something and counteract the shift to the left in German journalism: In contrast to many supposedly oppositional journals, we don’t just “blink” right briefly and then ultimately turn left, but we really represent a consistently conservative, identity-based and pro-national standpoint – and are thus in real contradiction to mainstream journalists, who, according to the study by Emil OW Kirkegaards and his research colleagues, are by and large decidedly anti-national and anti-conservative.

But unlike the left-wing publications, we cannot hope for government support or NGO help; we generate every penny ourselves by continuously delivering high quality journalism from a truly oppositional perspective. When you’ve had enough of the left mainstream press, don’t hesitate any longer – take out a subscription to “konflikt Magazin” and read regular investigative analysis and research articles from a consistently independent perspective. The mass media and their left-wing foreground fear nothing more than an oppositional voice that writes against their narratives and half-truths on a high discursive level and with a scientific basis.

*Translated from the original.