Industrial policy has divided economists for decades. This column evaluates Korean government’s policy of promoting heavy and chemical industries in the 1970s, using plant-level output and productivity data. It shows that output and input use of targeted industries/regions grew significantly faster than those of non-targeted ones. However, total factor productivity did not increase because the misallocation of resources across plants within targeted industries/regions got significantly worse.

During the East Asian growth miracle periods, governments were heavily involved in the economy and selectively nurtured specific industries and companies. However, there is no definitive answer as to the effectiveness of industrial interventions (Noland and Pack 2003, Harrison and Rodriguez-Claire 2010, Den Haan et al. 2017, Rodrik 2019).

Using newly digitized microdata, we revisited Korea’s industrial policy during the 1970s (Kim et al. 2021). Relative to previous research that relied on industry-level data (e.g. Lee 1996, Lane 2021), we make progress in two ways. First, we utilize the fact that the policy targeted not only specific industries but also specific regions. This place-based nature of the policy is crucial for understanding the effectiveness of industrial policy. Second, we provide the first analysis of the pattern of resource allocation across manufacturing plants during this policy period.

The policy in question is the 1973-1979 heavy and chemical industry drive of the Park regime. The government launched the drive in 1973 for at least two reasons. First, North Korea’s military provocations and the partial pull-out of the US troops from South Korea in 1971 motivated the government to strengthen its military capabilities by promoting defence industries and their upstream industries (Ahn and Kim 1995, Lane 2021). The other motivation was to further promote export, with the explicit target annual export of USD 10 billion. The government had been influenced by Japan’s experience in this regard. By switching from the traditional labour-intensive, light industries to heavy and chemical industries in 1957, Japan’s annual export exceeded USD 10 billion by 1967. Government support for the targeted industries in Korea came in various forms, such as tax incentives, subsidized long-term loans, and constructing industrial complexes for them. The policy did not last. After the assassination of President Park in 1979, the next administration adopted private sector-led growth as the core of their new economic policy, following a period of ‘rationalization’ that was meant to undo the excess investment in the heavy and chemical industries (SaKong and Koh 2010).

Figure 1 shows the two main instruments of the heavy industry drive. Panel (a) shows the effective tax rates across nine industries from Kwack (1985), who constructed them from the relevant legislation promoting investment in targeted industries. During the policy period, there was a stark divergence in effective tax rates between targeted and non-targeted industries. Panel (b) shows the locations of industrial complexes during the policy period. In February 1974, the government established the Korean Industrial Complex Corporation (KICOX), charged with the construction of industrial sites and the necessary infrastructure for targeted industries. The government invested 100 billion won (USD 247 million in 1974) in KICOX, which had special privileges including tax exemption, the right to appropriate land, and the right to borrow money from overseas (SaKong and Koh 2010). 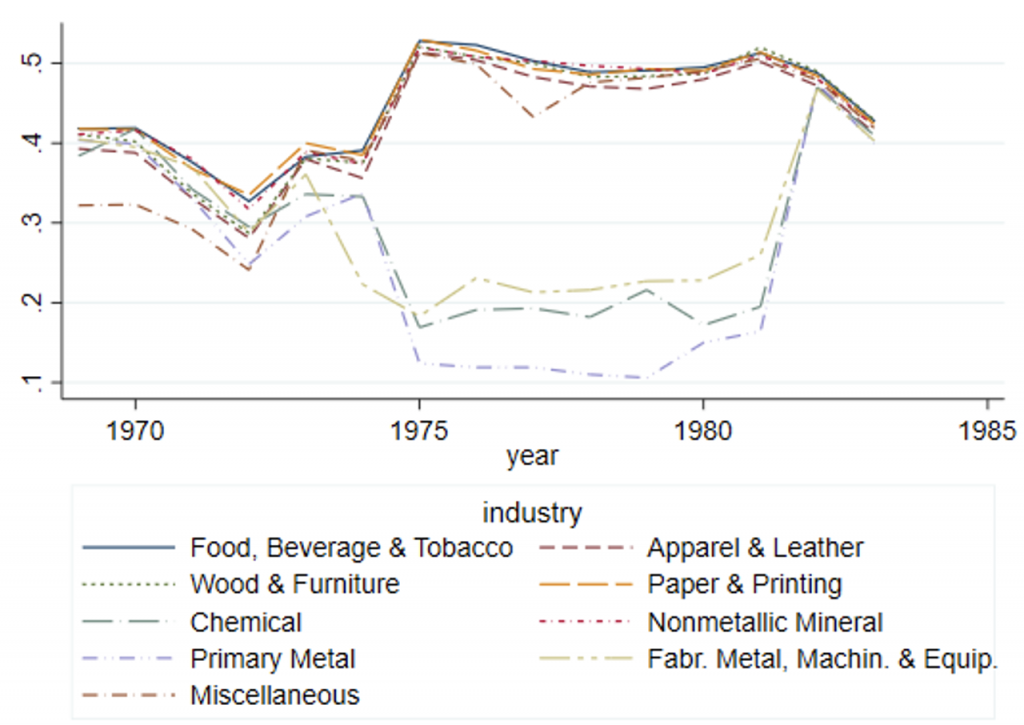 (b)       Construction of Industrial Complexes in Korea 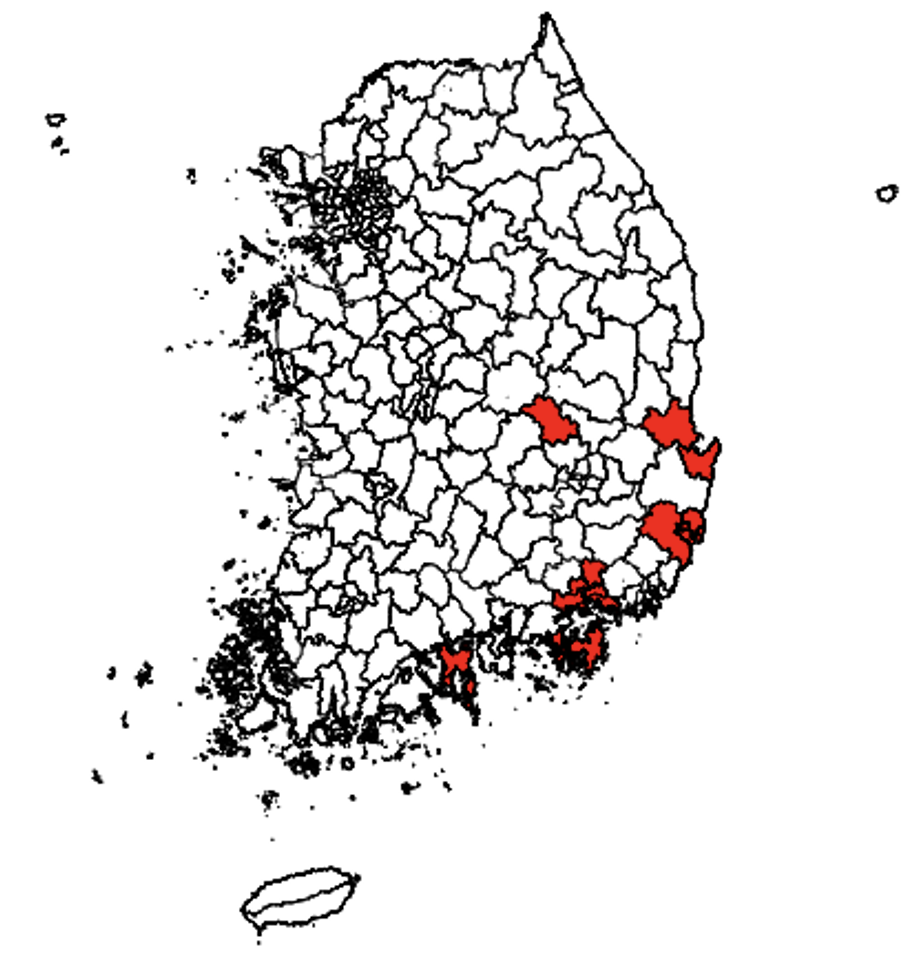 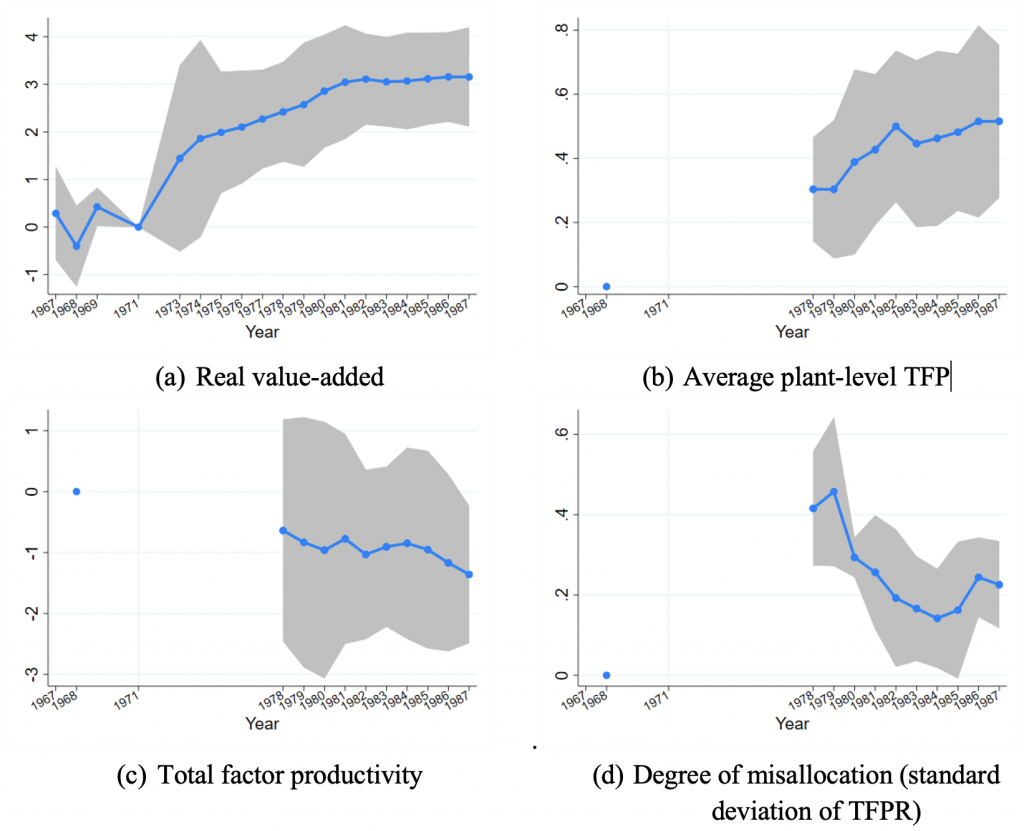 The misallocation was especially severe among the plants in the targeted industries/regions that entered during the policy period. This evidence is consistent with the rise of large business groups (known as chaebols) and the cross-subsidisation practices of their business units during this period (SaKong and Koh 2010). A simple accounting exercise following Hsieh and Klenow (2009) shows that, if the degree of misallocation within the targeted industries/regions relative to the degree within the non-targeted ones had remained the same between 1968 and 1980, their average TFP would have been 40 percent higher in 1980.

In addition, we provide new evidence on the ways in which industrial policy reshapes the economy. First, the establishment size distribution of the targeted industries and regions shifted to the right (i.e. larger establishments), with the right tail becoming noticeably thicker. The shift is mostly accounted for by the entry of large plants. This is consistent with what happens in models of technology adoption by Buera et. al. (2021), although in our data the relationship between plants’ productivity and size became more misaligned under the policy. Second, the input-output structure of the economy evolved in a way that the targeted industries significantly increased their output multipliers. To the best of our knowledge, this is the first evidence drawing attention to the evolution of an economy’s input-output structure. Using the formula of Fadinger et al. (forthcoming), we calculate that this change in the input-output structure accounted for about one-third of the TFP growth of the entire Korean manufacturing sector between 1970 and 1980. In this vein, the differential impact of the policy we identify may significantly underestimate the overall impact of the policy on the economy.

So, was the Korean heavy industry drive a success? One conclusion we can safely draw without a full cost-benefit analysis is that the policy would have had a more positive effect if the promotion of the targeted industries and regions had not come with a rise in concentration and misallocation within them.

*Republished with kind permission from the original on VoxEU.