An increasing number of media articles highlight how rich countries are rapidly automating and that developing countries may lose out – endangering the future of manufacturing-led development.  Much of the literature is drawn from robot adoption in rich countries and focused on the labour market impacts (Acemoglu and Restrepo 2017, Adachi et al. 2021, Deng et al. 2021).  We know surprisingly little about robot diffusion in developing countries and the impact on trade.  Recent evidence on automation and reshoring is at best mixed and finds that automation in rich countries may actually increase imports sourced from poorer countries (Artuc et al. 2018, 2019, Stapleton and Webb 2020).

In this column we explore a new channel – whether automation leads to export quality upgrading – in both developing and developed economies.  Robots perform tasks repeatedly to the same high level of accuracy, so are commonly used in the assembly of small electronic components, precision welding of car parts, or cutting of metals.  Some types of advanced robots are able to operate within extremely accurate tolerances – for instance, those with lasers can cut to within 10 micrometres (0.01 millimetres) – or are equipped with sensors that allow the machines themselves to identify product defects. Robots may therefore reduce human error in production, increasing product quality.

To assess this, in a new paper (DeStefano and Timmis 2021), we combine data on robot diffusion and export quality that span a broad sample of countries (28 developed and 31 developing economies) over the period from 2000 to 2015. Export quality is derived from detailed HS 10-digit US import data (following Khandelwal et al. 2013) and combined with data on robot use at the country-industry level. The extensive country coverage in our data allows us to distinguish effects in developed and developing economies, and the richness of the trade data enables us to examine which types of products are being upgraded within each country. 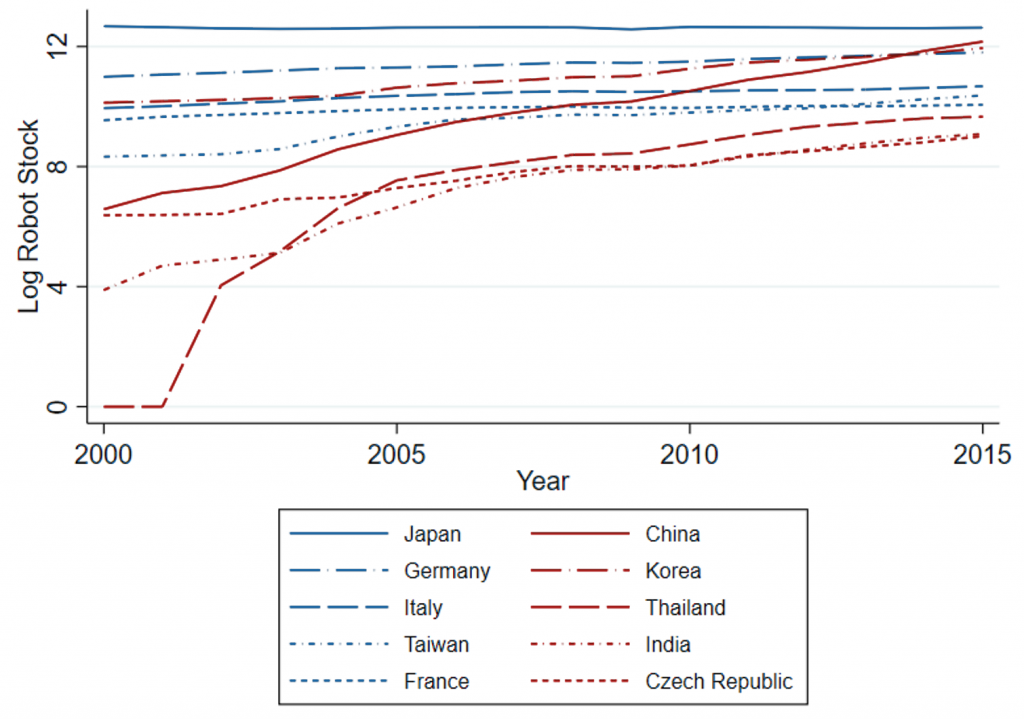 Notes:  Observations in the figure reflects the (log) total robot stock for each country and year, for the economies with the largest robot stock in 2015.  Note in our regression analyses, robot stock is used at the country-industry-year level. Country income status is defined by the World Bank (2000).

Robot diffusion among foreign export customers strongly predicts automation adoption at home.  To address endogeneity concerns, we instrument robot adoption of the home country-industry using robot diffusion among their foreign customers located in other world regions, using their initial foreign trade network defined in 2000. Our motivation for this instrument comes from the extensive evidence of technology spillovers from foreign multinational customers to their overseas suppliers (Javorcik 2004). We find that automation cascades from foreign customers to their suppliers.

Figure 2. Effect of robot adoption on export quality: All countries, developing and developed

Note: The following figure illustrates the estimated coefficients in the second stage 2SLS regression of robot adoption for all countries, developing countries and developed countries. Country income status is defined by the World Bank (2000).  Controls include (log) employment and (log) real value added per worker at the country-industry-year level, as well as exporter*10-digit product and exporter*year fixed effects.

Differential gains depending on initial quality

Within each country, robots lead to quality upgrading of initially low-quality exports, furthest from the quality frontier. This is true of both advanced and developing economies. For example, products that are initially 10% further from the quality frontier achieve a 1% faster increase in quality from a given growth in robot stock in developed economies, and a 1.3% faster increase in quality in developing countries. Since developing economies in general tend to produce lower-quality exports, this reconciles the stronger aggregate quality upgrading we observe for developing countries in Figure 2.

The fact that robots matter more for initially lower-quality goods in both developed and developing countries suggests that robots are important for economic development. Quality improvements in production and exports help determine economic development (Hidalgo et al. 2007, Fontagne et al. 2008). Robot adoption appears to enable catch-up in export quality, given that the gains are stronger for initially poorer quality exports.  For developing countries, robot diffusion may therefore help them to overcome quality standard that firms face looking to participate in and climb the ladders of global value chains.

Our results have several important implications for policy. First, technology always creates winners and losers. While automation poses risks, it also presents new opportunities for developing countries through the ability to upgrade production and leverage the benefits of global value chains. Second, trade openness can help technologies like robots diffuse through supply chains and across borders.  Increased protectionism may stymie the potential for international technology diffusion and constrain the ability of firms in developing countries to upgrade production processes, move into higher value-added activities, and produce the high-quality products increasingly demanded by consumers globally. Finally, there is no ‘one size fits all’ recipe for policy targeting technology adoption. Firms and countries adopt different types of production technologies depending upon their factor endowments and incentives to do so.  Thus, encouraging only the most advanced technologies is unlikely to be appropriate, especially for developing economies.

Javorcik, B S (2004), “Does foreign direct investment increase the productivity of domestic firms? in search of spillovers through backward linkages”, American Economic Review 94(3): 605–627.

*Republished with kind permission from the original publication on VoxEU.