Reasons for the price rally on the gas market

Since the end of 2020, the EDB’s forecast scenarios have been based on the assumption of a favourable situation in the commodity markets in 2021. Perhaps the pricing environment will be good throughout the first half of the 2020s. This is a consequence of global asset inflation and the beginning of a new investment cycle. There are regular outbursts for individual assets. Gas has attracted particular attention in recent weeks. The price rally in the gas market is extreme in its parameters, although it is in trend with the general inflation of assets (Figure 1). The root cause of the skyrocketing commodity prices was massive budget and monetary injections in developed countries, which resulted in a rapid recovery in demand, outstripping supply opportunities. The supply of goods in such conditions lengthened, and their value increased.

The growing demand for fuel resources has led to a price rally, the effects of which the world economy is starting to feel seriously. The surge in natural gas prices is particularly notable. The World Bank’s natural gas price index in October 2021 rose 4.0 times compared to the pre-pandemic level of December 2019. The strongest dynamics were observed in Europe: “blue fuel” was sold 6.7 times more expensive in October 2021 compared to December 2019. At the same time, exchange prices on the TTF hub on 6 October 2021 reached almost USD 2,000 per thousand cubic meters, and daily fluctuations exceeded tens of percent. Subsequently, the value corrected closer to USD 900 (4 November 2021 – USD 890), which, nevertheless, remains a historically high level (Figure 2).

The fundamental factor behind the rally in energy prices is the super-soft monetary policy of the central banks of developed countries. Huge volumes of cheap money poured into the markets, which found shelter, including in raw materials. However, specific market factors also contributed to the unprecedented surge in gas prices. On the demand side, these are, first of all, the weather conditions of the winter 2020/2021 and of the summer of 2021. A cold winter in Europe led to an increase in gas demand and rapid emptying of storage facilities. It was not possible to restore the volume of reserves in the summer due to hot weather – gas consumption for air conditioning purposes increased. The second reason is the insufficient generation of energy from wind in Europe this year, given the increased importance of renewable energy sources. The third reason is the redistribution of LNG supplies in favour of premium Asian markets. The fourth reason is the decline in production in Europe itself (Figure 4). In addition, the forcing of the green energy transition leaves little room to switch from gas to coal, which could help balance the market.

As a result, as of 2 November 2021, European storage facilities are only 71.6 percent full. There has never been such a low level in five years – before, the minimum level on 2 November was recorded in 2017 and amounted to about 88 percent (Figure 3). In the United States, gas reserves are now also below the average level over the past five years, although they are significantly higher than the minimum levels of the five-year period.

A frequently asked question now is – where is the ceiling for the rise in energy prices and how long will they hold out at higher levels? Natural gas prices are likely past their peaks, but they are likely to remain at historically high levels in the coming months and then decline as early as 2022. Filling up storage facilities in Europe will take time. In such conditions, it is highly probable that stock exchange gas prices in Europe will remain at high levels until the end of the first quarter of 2022. In the future, prices may significantly decrease. The key may be a gradual increase in supply, including in connection with the start of the operation of the Nord Stream-2. Gas demand is also likely to gradually stabilize.

The rise in gas prices is providing significant support to oil and coal trading prices. The cost of gas in Europe in October 2021 was equivalent to the cost of oil over USD 200 per barrel. Such a large-scale deviation in the relative price increases the demand for oil and allows it to trade above USD 80 per barrel. With the current parameters of the OPEC+ agreement, it is highly likely that oil prices will remain in the range of USD 75-85 per barrel or even higher until the second quarter of 2022.

What is the price effect on the European economy?

The rise in energy prices has a pro-inflationary impact and a constraining effect on production. First of all, these effects will be typical for the EU, where the rise in gas prices is maximum, and its significance in the consumer price index is high. If oil and gas prices remain close to current levels, inflation in the eurozone could be in the range of 3.5–4 percent. In 2022, inflation in the eurozone will slow down due to the implementation of the base effect of 2021. Producers of industrial goods, especially nitrogen fertilizers, may suffer from the rise in gas prices, which is a risk factor for food prices next year.

What is the impact on the Russian economy?

Russia is undoubtedly one of the main beneficiaries of the surge in world gas prices, but there are several nuances in the comprehensive assessment of the situation.

Of course, the current situation means primarily a significant increase in export and budget revenues, as well as an increase in the attractiveness of the Russian rouble. For nine months of 2021, the country exported natural gas twice as much as in the same period last year: USD 33.1 and USD 16.7 billion, respectively, according to the Russian Central Bank. The key factor behind the increase in exports was the rise in prices: the average price of natural gas exports in January-August 2021 amounted to USD 202 per thousand cubic meters (USD 282 in August 2021 – about 3 times higher than August 2020). This is over 70 percent more compared to January-August 2020 (Figure 5). The physical volumes of supplies, according to the Federal Customs Service of the Russian Federation, for eight months increased by 11.7 percent y / y.

The rise in energy prices contributes to an increase in oil and gas budget revenues and supports the rouble exchange rate. At the same time, the fiscal rule limits the impact of energy prices on the exchange rate, and the expected curtailment of QE in the United States is a factor of pressure on the rouble. The EDB’s baseline forecast assumed the rouble / dollar exchange rate of about 72-73 at the end of 2021 and its maintenance in this range in 2022. Estimates, in general, remain relevant, but in the short term, the probability of the rouble strengthening to 70 per dollar cannot be ruled out.

Source: CEIC, estimations by the EDB.

High energy prices support Russian exports and the rouble exchange rate. At the same time, exchange spot prices are not fully transferred to export prices, and the transfer itself may take months. This is due to the presence of long-term contracts and specific pricing mechanisms, when export prices can be tied to both spot and forward prices, or oil and petroleum products quotes. It should also be borne in mind that a long period of extremely high prices for energy resources can have a significant negative impact on the world economy and on the demand for hydrocarbons, and such a development is undesirable for Russia.

In Europe, the current situation is already labelled as an energy crisis. According to political logic, this implies a search for those responsible for what is happening. However, all in all, Europe’s problems are a consequence of skyrocketing demand, weak wind power generation, and declining gas production in Europe itself (Figure 4).

What is the impact on the economy of Kazakhstan?

In Kazakhstan’s export revenues, revenues from the sale of natural gas accounted for 4.7 percent on average for the period 2011–2020. Until October 2017, more than 90 percent of revenues from the sale of gas came from European markets. Deliveries were made only through the territory of Russia. In October 2017, a new route to China was opened. From that moment on, a reorientation of export flows took place. By 2020, China’s share in export gas revenues increased to 58.6 percent from 0.1 percent in 2011, while Europe’s share, on the contrary, decreased to 22.6 percent. 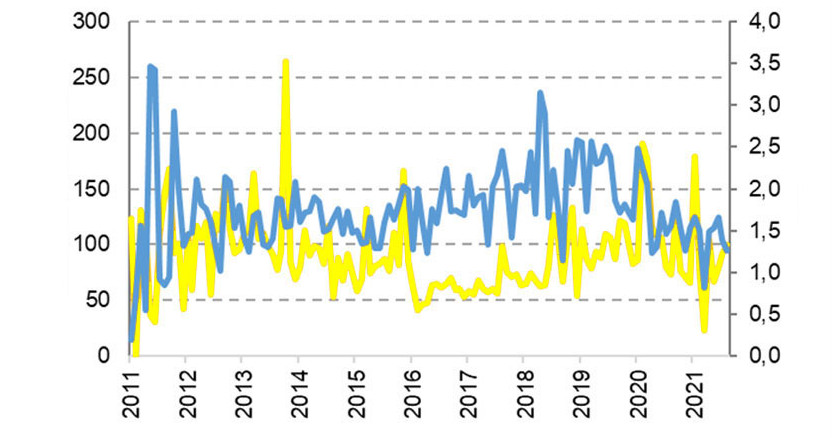 Source: CEIC, estimations by the EDB.

According to EDB forecasts, starting from the end of 2020, there should be a favourable conjuncture on the commodity markets in the first half of the 2020s. Perhaps the pricing environment will be good throughout the first half of the 2020s. For Kazakhstan and Russia, the emerging situation has obvious benefits: export revenues increase, budget revenues increase, and the attractiveness of national currencies is growing. At the same time, it is necessary to continue to monitor the unwinding of the inflationary spiral. The transformation of current problems into a real energy crisis is unprofitable for everyone – including exporters of hydrocarbons.