Figure 1 vividly paints the polar strategies adopted by the US and Europe at the onset of the COVID-19 crisis. In the US, the fraction of the working age population on UI surged from about 2% to 12% in April 2020, and – although it declined very rapidly after that – it remained higher at the beginning of 2021 than at the peak of the Global Crisis. In Europe, to the contrary, the increase in UI recipients was very limited, while STW take-up immediately sky-rocketed, with more than 16% of the working-age population enrolled in a job retention scheme as of April 2020.1 It is apparent that the focus of the labour market policy response in the US was on insuring workers against the cost of job losses, while in Europe on preserving job matches.

Figure 1. Labour market policy responses to recessions in the US and Europe 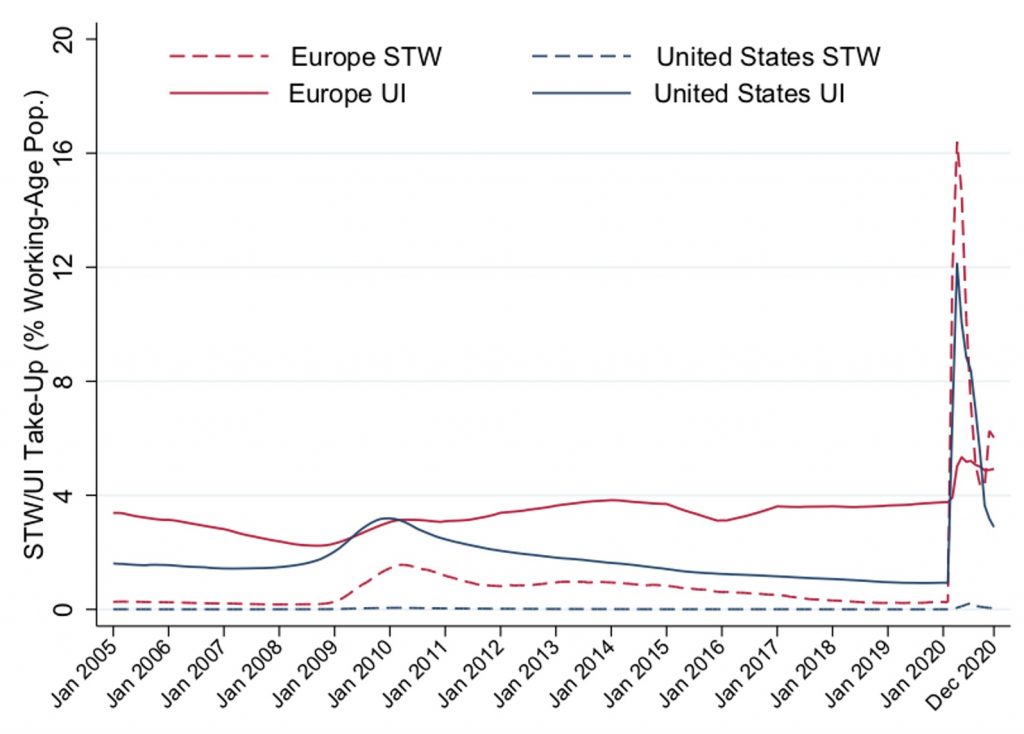 Notes: The figure reports the evolution of STW (dashed lines) and UI (solid lines) take-up in Europe (red lines) and the US (blue lines). STW and UI take-up are computed as the ratio of the number of individuals in the program in a given month, as a percent of the quarterly working age population. The series for Europe is a weighted average of the series for Germany, France, Italy, and the UK, weighted by the working age population.  Source: Authors’ computation based on data from OECD and national statistics.

Which strategy offers the most efficient use of social insurance resources? And what are the consequences of these two policy options for labour-market dynamics during the recovery? Will aggressive UI extensions lead to jobless recoveries? Or should we worry more about slower reallocation due to massive STW take-up?

A useful starting point to answer these questions is the standard public finance framework in which the optimal social insurance transfer balances out (1) insurance value – the benefit of transferring money to individuals who have been hit by a negative shock – with (2) fiscal externality – the cost of transferring those resources due to moral hazard responses by the insured. But this is not the whole story. By affecting workers’ and firms’ behaviours, social insurance interacts with pre-existing labour market inefficiencies. When determining the optimal generosity of social insurance, it is therefore necessary to also account for interactions between pre-existing inefficiencies and equilibrium adjustments. Among the important labour market inefficiencies that social insurance may interact with during recessions, three deserve particular attention: inefficient separations, search inefficiencies, and inefficient reallocation.2

To sum up, the optimal STW/UI mix is such that, at the margin:

The value of insurance depends on (1) the magnitude of the shock, (2) whether workers have other means of consumption smoothing, and (3) how they value insurance. Evidence suggests that the insurance value of UI is larger than that of STW. First, STW tends to protect mostly insiders of the labour market, that is people with higher income and better means of self-insurance such as the presence of a working partner in the household; UI instead protects mostly outsiders, i.e. younger individuals, with lower education and fewer means of consumption smoothing. Second, and relatedly, empirical evidence from the Global Crisis in Italy (Giupponi and Landais 2020b) shows that UI insures against consumption (or income) shocks of different magnitudes, as can be seen in Figure 2.3 The drop in earnings and transfers experienced by the unemployed upon layoff is much more severe and persistent than that of workers on STW.4 These two elements indicate that the value of UI may be somewhat larger than the value of STW.

Figure 2. Evolution of earnings and transfers around the events of job loss and STW during the Global Crisis 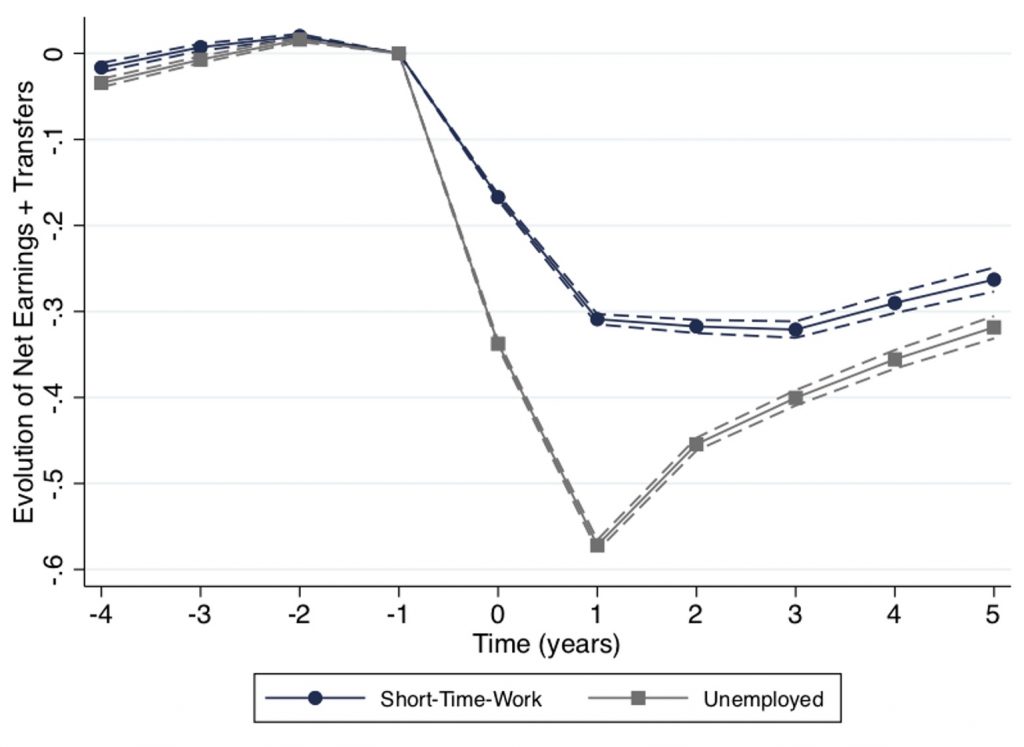 Notes: The figure reports the evolution of earnings and transfers around job loss (in grey) or around the start of a STW spell (in blue). It shows that job loss is associated with a much larger and much more persistent drop in resources than STW, implying that the marginal insurance value is likely greater for UI than for STW. Source: Giupponi and Landais (2020b) based on administrative data from INPS on the universe of employer-employee matches and social security payments in the private sector in Italy.

Fiscal externalities stem from the behavioural responses of agents – here workers and firms – to public policies. The extent to which UI generates behavioural responses is fairly well documented. We know for example that the duration of unemployment spells and job search intensity are very sensitive to UI generosity (Schmieder and Von Watcher 2016, Marinescu and Skandalis 2021).

Evidence from the Global Crisis (Giupponi and Landais 2020b, Kopp and Siegenthaler 2021) tends to suggest that behavioural responses to STW are limited. However, back then, STW was conditional on well-defined shocks to prevent moral hazard on the firm side. The massive extension of STW schemes during the pandemic potentially fuelled moral hazard.

Figure 3 provides some useful insight on the relative size of moral hazard responses to STW/UI, by comparing evidence on behavioural responses to STW and UI eligibility in the Italian context. The left-hand side panels report evidence on STW from Giupponi et al. (2021), the right-hand side ones on UI from Scrutinio (2020). In Italy, the amount of the STW subsidy received by the worker is capped at different levels for workers with contractual earnings above or below a certain threshold. Even though, as a consequence of this rule, the generosity of STW increases sharply at the earnings threshold (Panel A), there is no significant change in the probability that a worker is put on STW when employed at a firm using the scheme (Panel C), nor an increase in the amount of time spent on STW (Panel E) at the threshold. For UI, potential benefit duration is entirely based on age at layoff: workers fired before turning 50 are eligible for eight months of unemployment benefits, while workers fired after can receive up to 12 months of benefits (Panel B). Higher potential benefit duration triggers significant increases in the probability of UI benefit receipt – consistent with workers manipulating their layoff date to obtain more generous benefits (Panel D) – and is associated with longer actual benefit utilisation (Panel F).

Notes: The figure reports a set of graphs to illustrate the relationship between STW/UI generosity and take-up. Left-hand side panels report evidence on STW. Panel A shows the STW benefit schedule as a function of a wage threshold. The benefit amount is based on a 70% hours reduction and 2021 STW cap parameters. Panel C reports the probability for a worker to be put on STW in a given year (pooling years 2011-2014) as a function of the same wage threshold, conditional on being employed in a firm that uses STW in that year. Panel E shows the average number of weeks of STW in a given month as a function of the threshold, conditional on the worker receiving STW. Right-hand side panels report evidence on UI based on Scrutinio (2020). Panel B plots UI potential benefit duration as a function of a worker’s age at layoff. Panel D reports the density of layoffs by age at layoff. Panel F shows the duration of the UI benefit in weeks as a function of a worker’s age at layoff. Source: Giupponi et al. (2021) and Scrutinio (2020), both based on administrative data from INPS on the universe of employer-employee matches and social security payments in the private sector in Italy.

To sum up, while UI offers more insurance value than STW, it tends to exhibit larger fiscal externalities. Let us now consider the three sources of inefficiencies STW and UI are likely to interact with the most.

In the face of productivity shocks, firms and workers may fail to optimally preserve productive job matches, creating an excess sensitivity of separations to labour market fluctuations (e.g. Hall and Lazear 1984, Jäger et al. 2019). Social insurance may amplify this excess sensitivity by subsidising separations (UI) or, to the contrary, hamper it by subsidising labour hoarding (STW).

Figure 4 documents a very robust negative correlation between STW take-up and the evolution of the non-employment rate. Evidence at the country-level from the Global Crisis (Cahuc et al. 2021, Giupponi and Landais 2020b) suggests that employment strongly responds to STW usage and employment effects are larger for firms with liquidity constraints (Balleer et al. 2013, Cahuc et al. 2018). 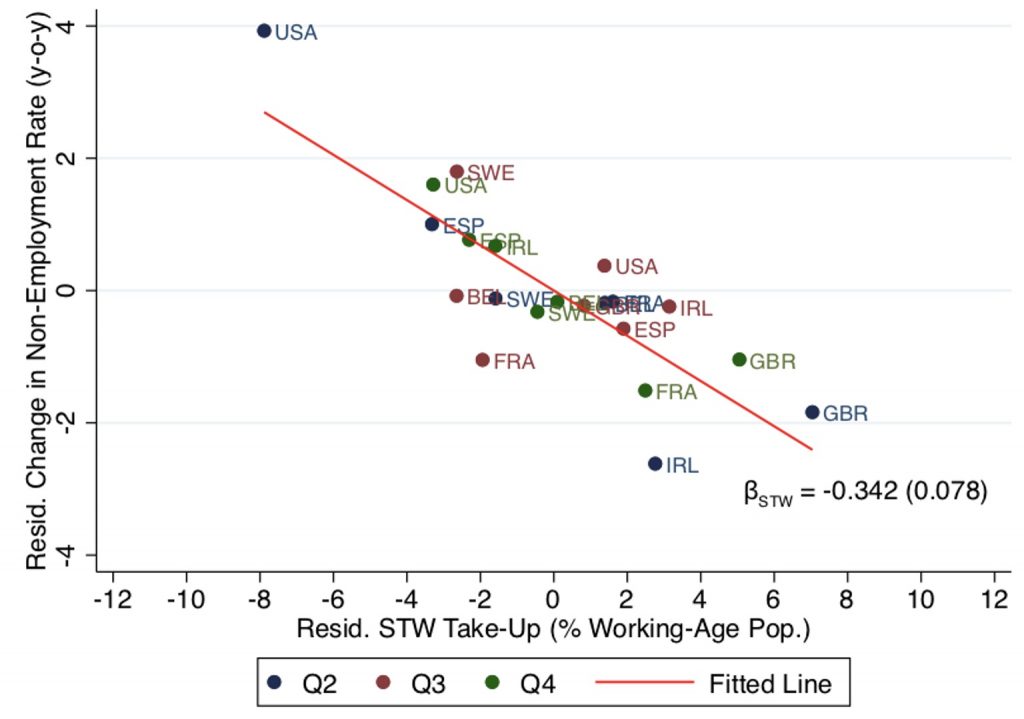 Notes: The figure reports a scatter plot of the relationship between the year-on-year change in the quarterly non-employment rate and the rate of STW take-up at the country level, conditional on UI take-up and the number of COVID-19 cases. STW take-up is computed as the ratio of the number of individuals in the program over the working age population. Source: Authors’ computation based on data from OECD, national statistics and the Johns Hopkins Coronavirus Resource Centre.

Social insurance affects equilibrium tightness by affecting workers’ search effort and firms’ labour demand. Recessions are generally times of slack in the labour market, meaning that there are too few job openings relative to the number of individuals searching for jobs (e.g. Michaillat 2012). By alleviating counterproductive rat-races for jobs, disincentivising job search may therefore be welfare enhancing (Lalive et al. 2013, Michaillat and Saez 2020).

Welfare consequences depend on the direction and magnitude in which STW/UI affect tightness and on how inefficiently tight or slack the labour market is to begin with. Giupponi et al. (2021) document that this recession is characterised by a particularly high level of tightness, and that this may be directly related to the generosity of social insurance during the COVID-19 crisis. In other words, generous social insurance (be it STW or UI) prevented the labour market from becoming inefficiently slack as in previous recessions (Figure 5).

Figure 5. Labour market tightness in France and in the US over time 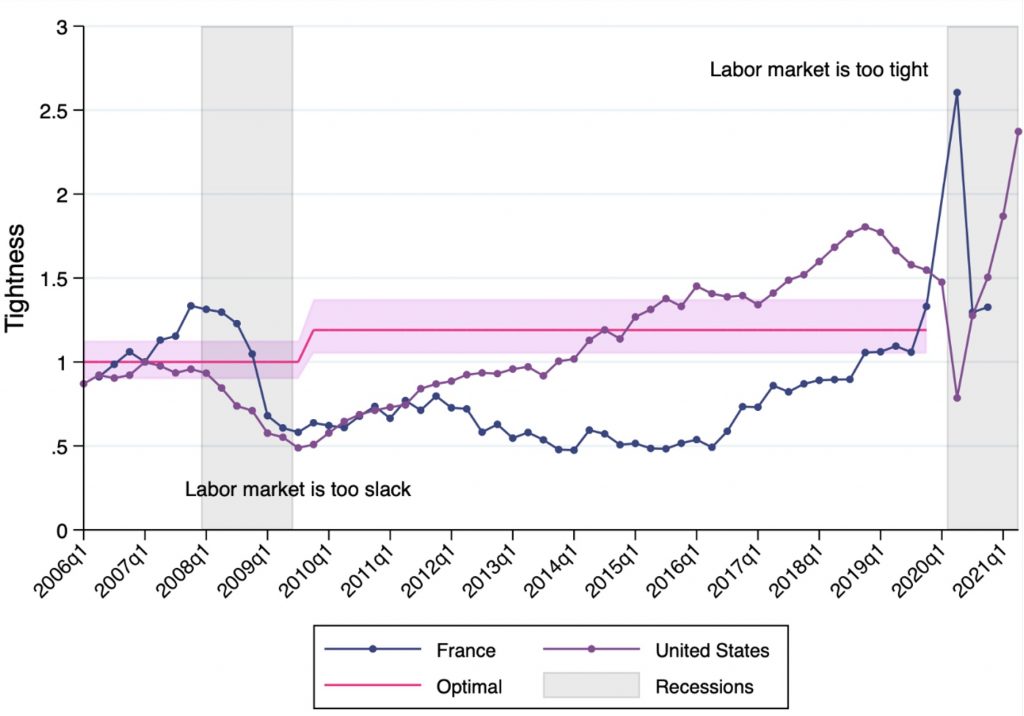 Notes: The figure reports the evolution of labour market tightness in France (blue) and in the US (purple) over time. It compares it with the optimal level of tightness based on Michaillat and Saez (2021). The grey zones correspond to the Global Crisis and the COVID-19 crisis. During the Global Crisis, the labour market was too slack, meaning that there were too many people searching for a job compared to the number of job openings. When the labour market is too tight, search effort on the firm side is greater than on the worker side. In other words, it is more difficult for firms to hire. Source: Authors’ computation based on data from Eurostat for France and the U.S. Bureau of Labor for the US.

While still relatively little is known about STW schemes and their potential welfare effects, this did not prevent European policymakers from aggressively resorting to them during the COVID-19 crisis. They probably did the right thing. In countries with already generous UI and/or strong employment protection, like Europe, strong cyclical STW programmes can be an extremely valuable complement to UI to respond to recessions. The value of insurance provided by their transfers is clearly lower than that of UI benefits, but the moral hazard they entail seems more limited. Importantly, recent evidence confirms that STW can also be an efficient way to attenuate the social costs created by ‘excess’ layoffs in recessions. Social insurance critically interacts with equilibrium in the labour market, and this has important consequences for reallocation and efficiency. On this front, much more research needs to be done.

Giupponi, G, C Landais and A Lapeyre (2021), “Should We Insure Workers or Jobs During Recessions?” CEPR Discussion Paper 16421.

Jäger, S, B Schoefer and J Zweimüller (2019), “Marginal Jobs and Job Surplus: A Test of the Efficiency of Separations,” NBER Working Paper 25492.

Lalive, R, C Landais and J Zweimüller (2013), “How Much Unemployment Insurance Do We Need?” VoxEU.org, November 9.

1 For detailed policy recommendations for boosting STW schemes during the Pandemic, see the Vox column by Giupponi and Landais (2020a).

2 See also the Vox column by Fujita et al. (2020) on match-preservation and reallocation issues during the COVID crisis.

3 See the Vox column of Giupponi and Landais (2019) for more details on this set of results.

4  Similar evidence has been found in Germany by Tilly and Niedermayer (2016).

*Republished with kind permission from the original on VoxEU.