The Eurasian Development Bank (EDB) has relaunched its flagship analytical project to monitor mutual direct investments by twelve states – the CIS countries and Georgia. The project is based on a bottom-up database of mutual direct investments, its main sources being company reports and other primary information. The project makes it possible to account for investments made through offshore structures and other “trans-shipping destinations”. In this respect, the project’s database differs from official central bank statistics.

Over a ten-year horizon, the mutual direct investment stock by post-Soviet countries declined in 2013–2015. Monitoring data show that since 2017 EAEU companies have been ensuring an upturn in mutual FDI in the CIS. Between 2016 and 2020, investments by the Eurasian corporate sector led to a 25 percent increase in total mutual FDI in the CIS, to USD 45.9 billion (Figure 1). 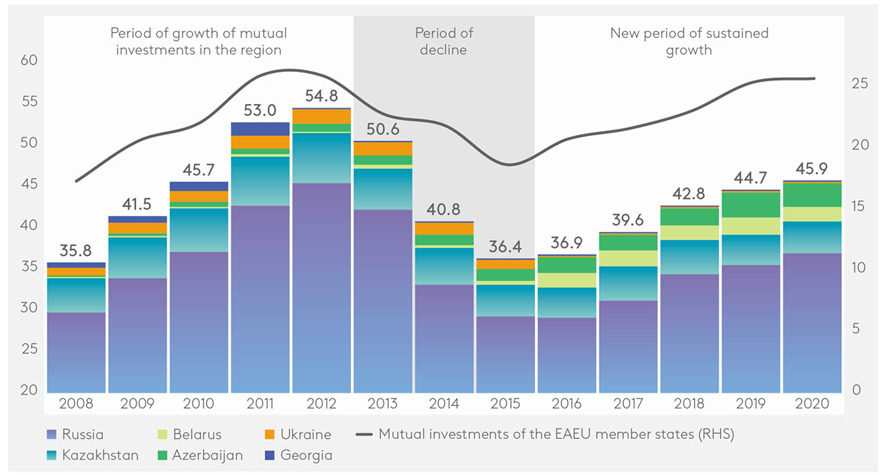 By the end of 2020, the mutual investment stock of the EAEU countries reached USD 25.4 billion, up 24 percent over the last four years. Kazakhstan boasts the highest FDI stock value and growth rate among the EAEU member states: USD 11.2 billion at the end of 2020, and an increase of USD 3 billion over four years.

Bank analysts note that corporate ties within the EAEU are more intense than those within the CIS. At the end of 2020, the share of mutual FDI stock of EAEU member states in total mutual CIS FDI amounted to 55 percent.

That said, investment ties between the EAEU and other CIS countries remain strong. At the end of 2020, the relevant FDI amounted to US USD 18 billion (39 percent of total FDI of the CIS countries). Most projects are in trade (both wholesale trade and retail trade), as well as in financial services, real estate, and machine engineering. The most capital-intensive projects were in extraction of oil and natural gas and chemical industry.

Our research suggests that the growth of mutual FDI in the EAEU is qualitative. Investors are increasingly interested in knowledge-intensive production, greenfield projects, and projects with low capital intensity. This facilitates the modernization and diversification of the EAEU economies.

In the coming years, the sectoral structure of mutual FDI will gradually become more diversified with the development of retail trade, financial services, and manufacture of machines and equipment. With the growing importance of the global climate agenda, mutual FDI in green economy projects will also grow. Over the past two years, mutual FDI in such projects has increased by 56 percent. Kazakhstan will consolidate its leadership in attracting direct investments in renewable energy, and Uzbekistan will become one of the largest recipients of FDI not only from Russia but from other EAEU member states as well.

The sectoral structure of mutual FDI in the EAEU countries differs from that in the CIS. The leading sector in the EAEU is mining of metal ores (19.8 percent), followed by land transport and transport via pipelines (14 percent) and financial services (11.4 percent) (Figure 2). Extraction of oil and natural gas (9.5 percent) ranks only fourth. The leading position of mining of metal ores is secured by projects in Russia and Kazakhstan. EDB analysts estimate that this sector contributed the most to the increase of mutual FDI stock of EAEU member states over the last four years (USD 2.2 billion).

Figure 2. Sectoral structure of mutual FDI stock in the EAEU member states and the CIS countries (2016 and 2020, in percent) 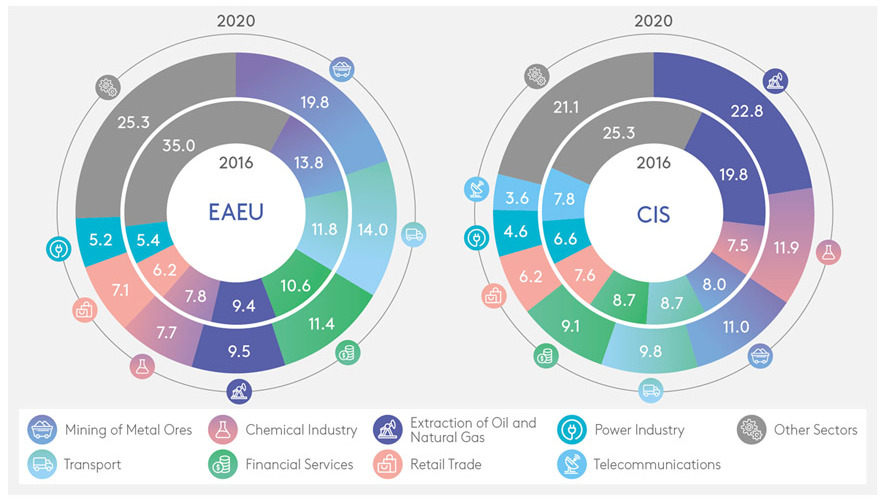 The report notes an emerging trend – the growth of mutual FDI of the EAEU countries in the manufacture of motor vehicles, machines, and electrical equipment. Over the past three years, FDI in this sector has increased by a factor of 1.6. The absolute figures remain small for the time being.

Interestingly, national private investors dominate the ownership structure of companies that invest within the EAEU, with a share of 55 percent at the end of 2020. The share of state-controlled investors (with the state’s equity participation of more than 50 percent) has remained almost unchanged since 2016 and made up 36 percent in 2020. The number of projects where foreign transnational corporations are among the investor company owners has declined from 10 percent to 6 percent over the last five years.

There have been significant changes in the rating of the mutual CIS FDI recipient countries. Kazakhstan steadily tops the list of FDI recipients and is now followed by Uzbekistan. Russia has fallen by two notches while Azerbaijan came close to it in 2020 with the fifth ranking. Ukraine has moved from the top ranking in 2012 to eighth by the end of 2020 (Figure 3).

Figure 3. Changes in the rating of the principal recipients of mutual direct investments originating from the CIS countries (2012-2020)

Russian investors are building up capital investments in the CIS countries, especially in Uzbekistan and Azerbaijan. Over the past four years, Russian FDI in Uzbekistan has grown 2.1 times and in Azerbaijan 1.2 times. Uzbekistan received 99 percent of all post-Soviet FDI from Russia (US USD 9 billion) (Figure 4), and Azerbaijan 99.3 percent (US USD 4.2 billion).

*The full version of the report “EDB Monitoring of Mutual Investments” is available at the EDB website and Evgeny Vinokurov’s personal website.