Understanding which industrial policies work is important to promote the development of poorer countries. This column examines the effects of technology and knowledge transfers on early industrial development, using evidence from the Sino-Soviet Alliance in the 1950s. The authors find that simultaneously receiving technologically advanced capital goods and know-how transfer had large, persistent effects on plant performance, while the effects of receiving capital only were short-lived. The know-how component was essential to generate horizontal and vertical spillovers and production reallocation from state-owned to privately owned companies since the late 1990s.

International technology and knowledge transfers are key drivers of economic development. For this reason, industrial policy interventions have often promoted their diffusion through the distribution of state-of-the-art capital goods or through extensive on-the-job training from foreign companies (Chandra 2006, Stockey 2020). The results of these interventions, however, are controversial. In some countries, such as Japan and South Korea, they have proven successful (Harrison and Rodriguez-Claire 2010, Choi and Levchenko 2021, Kim et al. 2021), while in some other cases, such as in Sub-Saharan countries, they have produced only modest results (Robinson 2009).

Understanding which industrial policies work is important to promote the development of poorer countries. However, economic research on this topic has been held back by several empirical challenges. First, one would need natural variation in the delivery of such interventions, since specific policies are more likely to be implemented where they have an ex-ante higher probability of success. Second, to fully assess their impact, it would be necessary to follow the outcomes of targeted firms and industries in the long run. Finally, it is hard to isolate the impact of specific contents, as industrial policies usually combine multiple interventions together.

In a recent paper (Giorcelli and Li 2021), we study the effects of technology and knowledge transfers on early industrial development, using evidence from the Sino-Soviet Alliance. In the 1950s, to advance the industrialisation of the newly formed People’s Republic of China, the Soviet Union supported the development of the so-called 156 Projects, an array of technologically advanced, large-scale, capital-intensive industrial facilities.[1] These projects focused on heavy industries and had the total value of $80 billion (in 2020 figures), equivalent to 45.7 percent of Chinese GDP in 1949 and 144.3 percent of its industrial output. These were of two types: the ‘basic’ ones involved the duplication of whole Soviet plants and the transfer of state-of-the-art Soviet machinery and equipment; the ‘advanced’ ones, in addition to the ‘basic’ component, also included the transfer of know-how to operate the new machinery and in-plant technical and management training for Chinese engineers and production supervisors. The Soviet transfer was considered a vital factor in Chinese development. Its investments, which accounted for 45 percent of Chinese GDP in 1949, allowed China to receive the best Soviet technology, which, in the steel and iron industries, was considered the best in the world (Clark 1973, Lardy 1995).

We collected new data from historical archives on the 156 Projects signed between 1950 and 1957, which we matched with declassified data on their plant performance yearly until 2000 for the steel industry and in 1985 and between 1998 and 2013 for all the industries.

Usually, large industrial projects are located in areas with an ex-ante higher potential to grow. This makes it hard to infer their implications for economic development. However, the Chinese case had some features that allow to overcome this empirical issue. In fact, the initial location of the 156 Projects was chosen based on strategic considerations and proximity to natural resources (Figure 1). However, during their completion most projects faced substantial delays, not related to their characteristics but due to Soviet constraints in providing capital goods and experts to train their Chinese counterparts. When the Sino-Soviet Split in 1960 suddenly ended the alliance between the two countries, the 156 Projects were interrupted at the stage they were. As a consequence, projects that experienced fewer delays had already received the Soviet machinery and training (advanced projects), others had only received the Soviet machinery (basic projects), while the remaining ones that experienced more delays ended up neither receiving any Soviet capital nor training and were completed by China alone, following the original Soviet plans but using traditional domestic technology (comparison projects). Notably, the performance of plants in the three groups of projects were substantially the same in the five years before the Soviet interventions.

Figure 1. Location of the 156 Projects 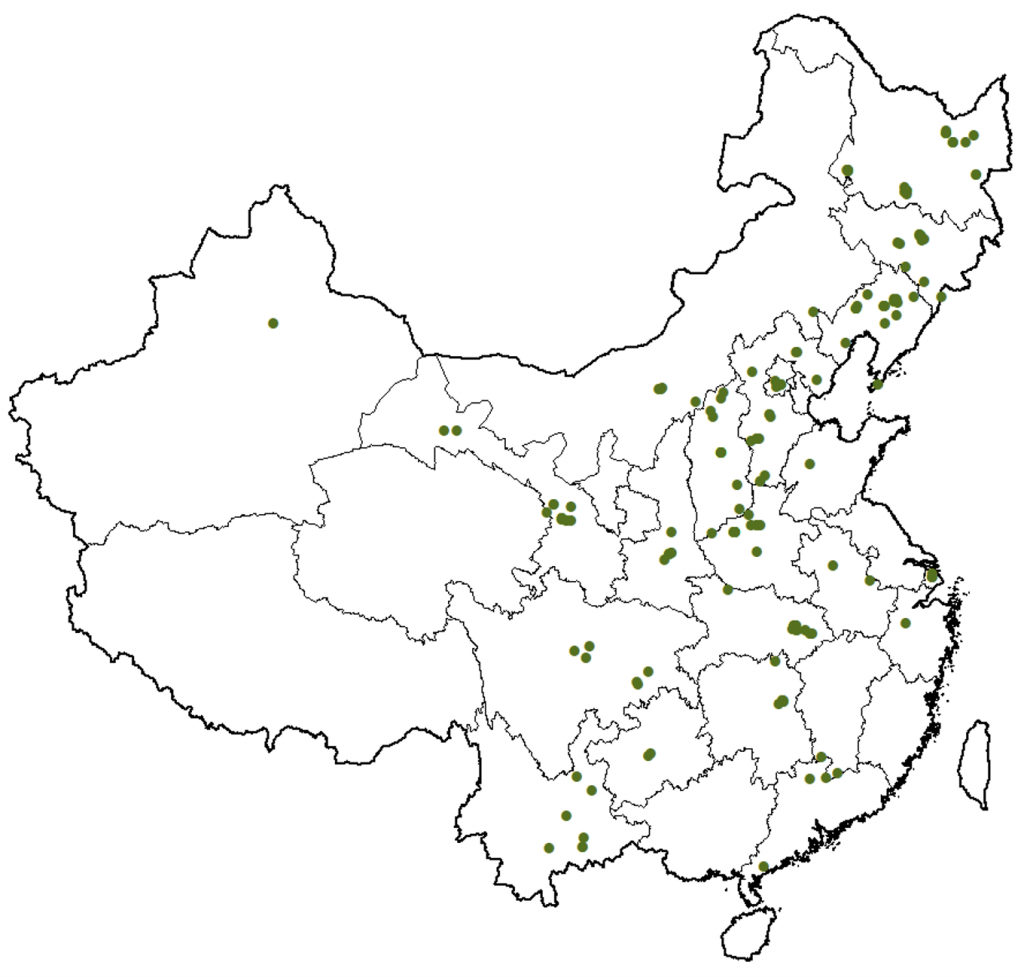 Notes: The figure shows all the 139 approved projects between 1950 and 1957, although the iconic label 156 Projects refers to the number of projects initially contemplated. Source: Data are provided at the project level from the National Archives Administration of China. 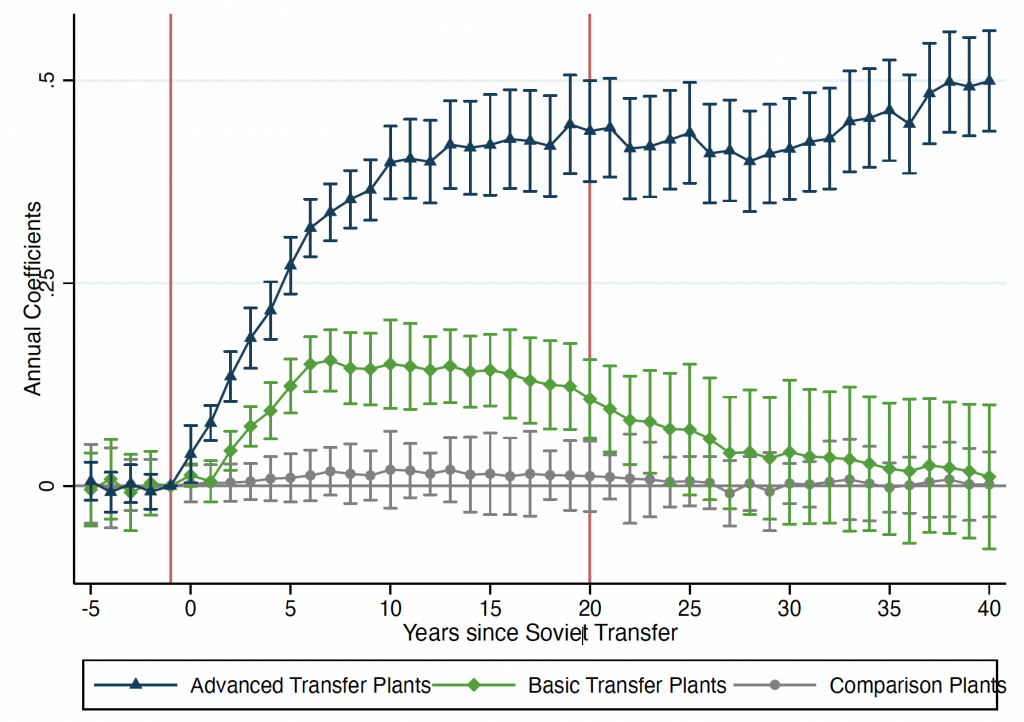 The major goal of the Soviet technology transfer was to create large industrial facilities to push local industrial development. Was the programme successful in doing so? We show that the presence of advanced plants determined substantial productivity spillover and technology diffusion within firms and across plants horizontally or vertically related to them. When, in the late 1990s, the Chinese government allowed the privatisation of state-owned companies, firms related to advanced plants that became private performed better in terms of value added, productivity and exports. At the county level, these changes were associated with an increased share of industrial output produced by private firms. We further explore potential mechanisms that could drive the persistent spillover effects in the long run. Counties that hosted advanced plants had a higher concentration of industry-specific human capital, measured by engineers and high-skilled workers, since advanced plants promoted the creation of technical schools and STEM majors. When firms started competing for inputs in the local market, companies that became privately owned may have been able to hire more educated workers, with positive effects on their performance. By contrast, we do not find evidence of preferential treatments from the government or better political connections in the counties where advanced plants were located.

What are the policy implications of our research? In 1949, China was an agricultural country comparable to various developing countries today, where technology and knowledge transfers often occur through foreign direct investment and joint ventures (Robinson 2009, Jiang et al. 2018). Our work shows that the effects of foreign-imported technologies are hard to replicate using domestic capital goods in early stages of economic development. Moreover, our findings underscore the importance of foreign on-the-job training and know-how, not only for improving firm performance and technology development but also for propagating industry knowledge to other companies, with the subsequent creation of high-skilled human capital in the long run.

Our paper shows that the effects of receiving both technologically advanced capital goods and know-how transfer under the Sino-Soviet Alliance had large, persistent effects on plant performance, while the effects of receiving capital only were short-lived. The know-how component was essential to generated horizontal and vertical spillovers, as well as production reallocation from state-owned to privately owned companies since the late 1990s.

Chandra, V (2006), Technology, Adaptation, and Exports  How Some Developing Countries Got It Right, World Bank Publications.

Giorcelli, M and B Li (2021), “Technology Transfer and Early Industrial Development: Evidence from the Sino-Soviet Alliance,” NBER Working Paper No. 29455.

Harrison, A and A Rodriguez-Clare (2010), “From Hard to Soft Industrial Policies in Developing Countries,” VoxEU.org, 27 June.

1 We say ‘so-called’ because 156 projects were originally contemplated and because the identifying label has persisted to this day in China. However, only 139 projects involving Soviet technology transfer were eventually signed and approved.