New evidence is transforming the way we look at long-term trends in economic inequality. This analytical note reconstructs wealth inequality in the German area over five centuries. The significant declines in inequality triggered by the Black Death and again by the Thirty Years’ War of 1618–1648 and the plague that followed provide strong support for the potential levelling effects of catastrophes. However, the much lower mortality rate for Covid-19 suggests we can expect inequality to increase, not to decline, as a consequence of the pandemic.

Recent years have seen a flourishing of studies on preindustrial inequality and the factors leading to increases or declines in inequality. The Great Recession made inequality a hot topic in political debates (Wade 2014, Piketty 2015). The ongoing Covid-19 crisis, which seems likely to exacerbate inequality within-country across the West and probably across-country worldwide (Filauro and Fischer 2021, Furceri et al. 2021), makes it all the more urgent to better understand the historical factors which shape inequality in the long run of history.

For a long time, trends in preindustrial inequality have been the subject more of speculation than of proper measurement. This is now changing, and new evidence is transforming the way we look at long-term trends in economic inequality, particularly in two respects: (1) the causes of inequality change, and (2) the distributive impact of pandemics and other major catastrophes. Regarding the first point, a crucial aspect is that the newly available studies do not generally confirm the Kuznetsian paradigm (see Alfani 2021 for a synthesis). In 1955, Kuznets argued that inequality, starting from a low level in preindustrial times, increased at the beginning of industrialisation and thereafter followed an inverted-U path throughout the industrialisation process (the ‘Kuznets curve’).1 But inequality was found to have been on the rise since at least the beginning of the early modern period in almost all areas subject to systematic research, so that on the eve of industrialisation it was already relatively high. This raises many questions about the causes of inequality change, which can no longer be assumed to consist solely in economic growth. The evidence for preindustrial times suggests that inequality growth also occurred in phases of economic stagnation or decline (Alfani and Di Tullio 2019, Alfani 2020; 2021). In this sense, studies of preindustrial inequality contribute significantly to current debates on recent trends.

In a recent article (Alfani et al. 2022) we provide a general reconstruction of wealth inequality in the German area (defined as that falling within the boundaries of today’s Federal Republic of Germany) covering five centuries: from the immediate aftermath of the 1348 Black Death to circa 1850, the eve of German industrialisation. Our reconstruction is based on new archival data collected from fiscal sources and on the large local literature mostly produced by the German Historical School of Economics, which was active at the turn of the 20th century and was particularly interested in the study of medieval and early modern distributive dynamics.

1. A first phase of inequality decline was triggered, as elsewhere in Europe, by the Black Death and it lasted until circa 1450.

2. After this temporary calm in inequality, the trend turned towards growth. Throughout the eventful 16th century – the time of the Protestant Reformation and religious wars – Germany experienced steadily rising inequality, which reached its high point on the eve of the Thirty Years’ War.

3. A second phase of significant inequality decline was triggered by the Thirty Years’ War of 1618–1648 and the widespread plague it brought with it in 1627–1629.

4. Another phase of inequality growth started circa 1700 and continued until 1850 – and beyond that date, as has been argued by Kuznets himself for Prussia and confirmed by recent studies (e.g. Bartels 2019). Wealth inequality growth continued in Germany throughout industrialisation and until the eve of WWI. 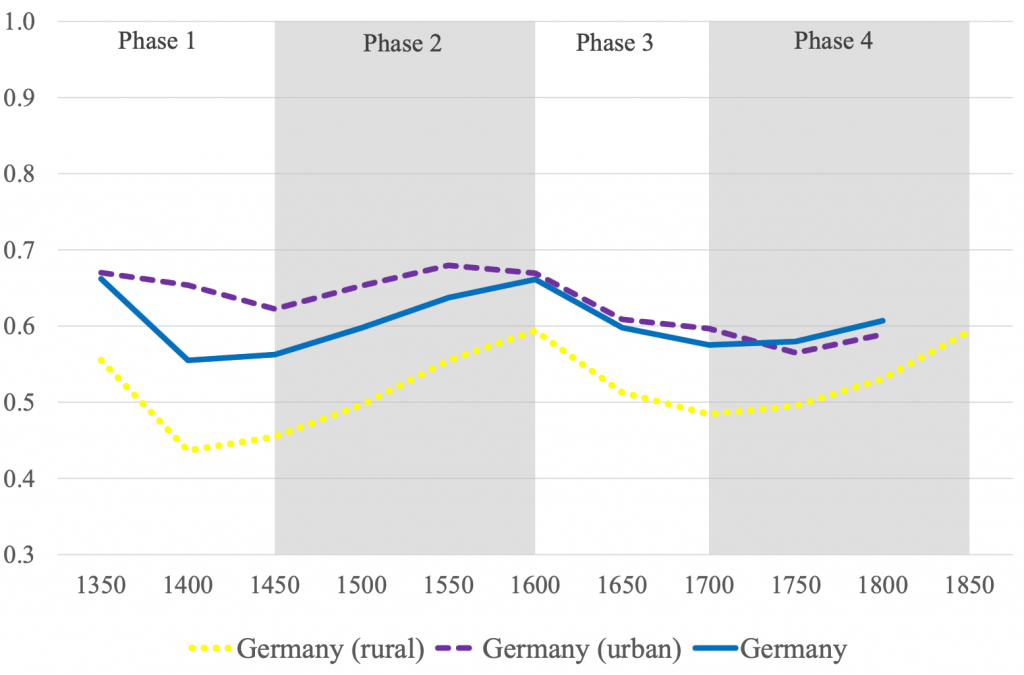 For most of the period that we cover, Germany followed a trend similar to other parts of Europe (Figure 2). In particular, the levelling power of the Black Death has now been demonstrated for a range of areas, including a variety of Italian pre-unification states, southern France and the southern Low Countries (Alfani 2020, 2021). Spain might have been the rare exception due to highly specific conditions (Prados de la Escosura et al. 2020). Also, the tendency for wealth inequality to grow quickly from circa 1450 is entirely similar to what has been found elsewhere – but with a striking difference: only in Germany do we find another phase of catastrophe-induced levelling in the 17th century. 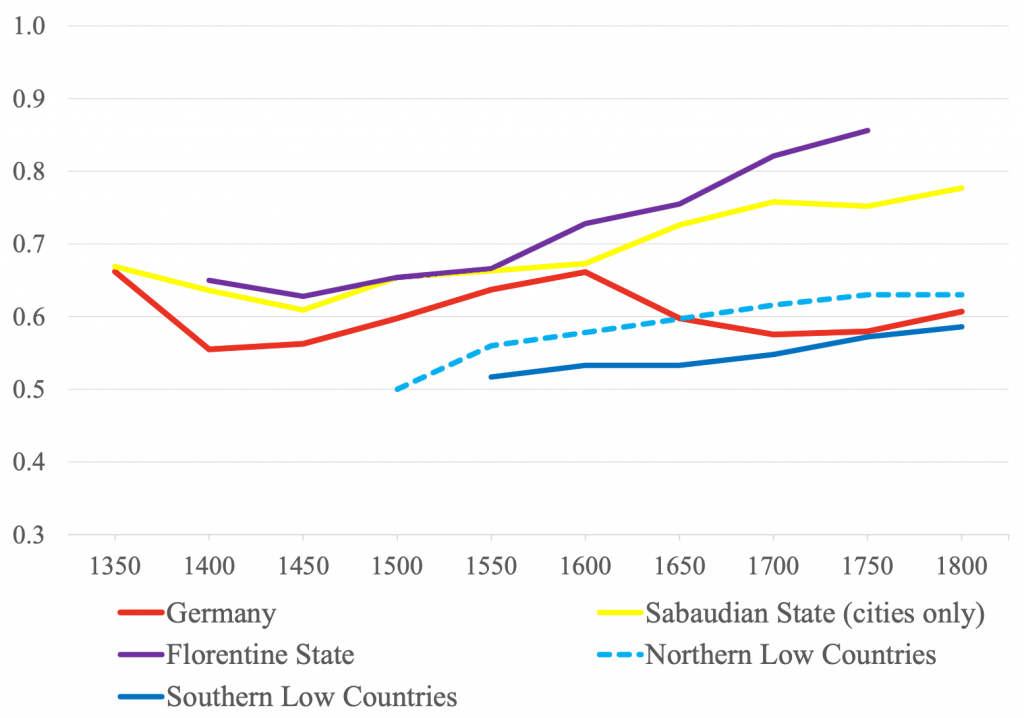 Our findings provide new insights into the levelling effects of catastrophes – a much-debated driver of inequality change. We are the first to provide strong support for the potential of early modern wars to reduce inequality. In general, this confirms Scheidel’s (2017) hypothesis on the leveling power of catastrophes. However, the Thirty Years’ War was unique in its level of destruction and in its high mortality, further exacerbated by the associated famines and plagues. These characteristics make it the only pre-industrial war for which we have evidence so far of a significant and long-lasting ‘egalitarian’ impact on inequality. Consequently, this finding supports the view that we need to be very cautious when making generalisations about preindustrial distributive dynamics (Alfani 2020, 2021), and that we need more regional- or state-level studies to highlight commonalities as well as local specificities.

It should also be noted that epidemics and pandemics can be expected to reduce inequality only in the presence of extremely high mortality rates. The Black Death killed about half the population of Europe, while in Germany the 1627–1629 plague and the Thirty Year’s War killed 40%. When mortality rates (i.e. the percentage of people dying) are one or two orders of magnitude lower – as with the Spanish Flu of 1918–19 or, presumably, Covid-19 – we can expect inequality to increase, not to decline as a consequence of a pandemic (Alfani 2020).

The picture that emerges from the case of Germany is one of a succession of distributional waves, which seems to support the arguments put forward by Milanovic (2016), including his view that the historical events triggering phases of inequality decline were of an ‘idiosyncratic’ nature. But at the same time, had those events not occurred and had Germany continued along a path orientated towards inequality growth throughout the early modern period, as documented for other European areas, it would have been much more unequal around 1800 than in the late Middle Ages. This view is supported by a difference-in-differences analysis (Alfani et al. 2022).

In the 19th and early 20th centuries, Germany went through another wave in inequality – an exemplary Kuznets curve – with a rising phase until 1913 followed by a decline at least until the 1970s. However, inequality was rising well before the 19th century. This means that we need to consider other drivers of inequality than industrialisation per se or economic growth more generally. Indeed Germany, which was on the losing side of the Little Divergence from the 16th century, is yet another example of a preindustrial European area where inequality growth could occur without economic growth. Similarly to other recent studies (see Alfani 2021 for a synthesis), in our article we consider as alternative explanations the role played by demographic forces, as well as by processes of state formation and by changes in the levels of regressive taxation. While admittedly many questions remain open and will have to be targeted by future research, our study of preindustrial Germany offers new and relevant material to current debates on the roots of inequality in western societies, past and present. It also provides useful intellectual food for debates about distribution-related policies.

Alfani, G and M di Tullio (2019), The Lion’s Share. Inequality and the Rise of the Fiscal State in Preindustrial Europe, Cambridge University Press.

Piketty, T (2015), “Putting Distribution Back at the Center of Economics: Reflections on Capital in the Twenty-First Century”, Journal of Economic Perspectives 29: 67–88.

Scheidel, W (2017), The Great Leveler: Violence and the History of Inequality from the Stone Age to the Twenty-First Century, Princeton University Press.

1. Although Kuznets’ hypotheses were mainly concerned with income, it stands to reason that they can be also applied to wealth, as more or less explicitly suggested by a growing number of studies (e.g. Lindert 1991, Alfani 2010a, 2021a, Milanovic 2016, Scheidel 2017).