The German coal phase-out has been decided by official Berlin. But is the end of coal-fired power generation in Germany really possible by 2038 or even 2030? And does it make sense?

Coal phase-out in Germany by 2030: What is the problem? 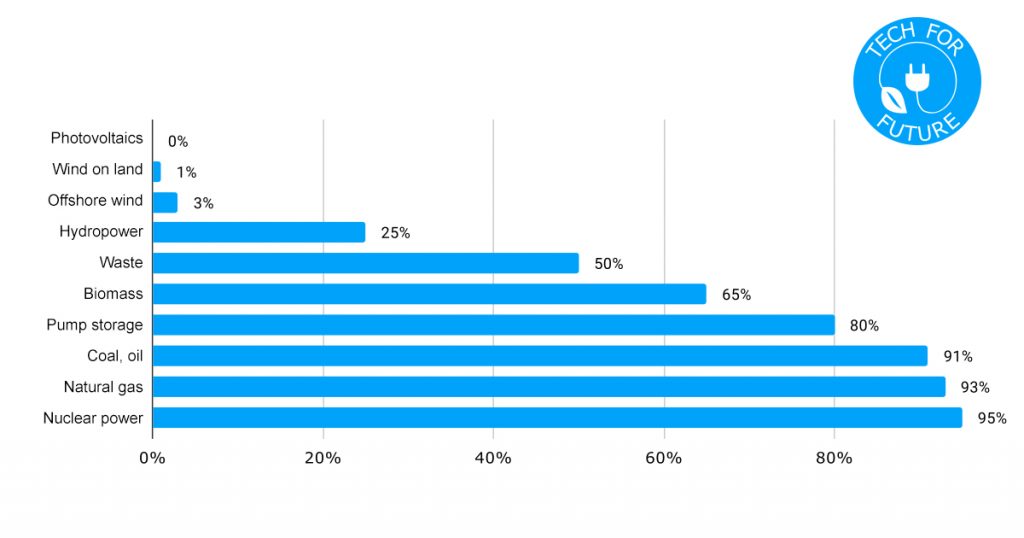 Solar power and wind power contribute almost no guaranteed output. The sun doesn’t shine at night and due to lulls in the wind happen frequently.

Even a tenfold increase in wind and solar power generation will not enable a coal phase-out. 100 GW of wind power can only replace a 1 GW coal-fired power plant. 100 GW of solar cannot replace anything.

So the late phase-out of coal is not due to the sluggish expansion of renewables. We could shut down all coal plants immediately if we had enough gas plants or nuclear plants.

In fact, Germany could have phased out coal years ago instead of nuclear. But despite the climate crisis and the energy crisis, the country is going through with the nuclear phase-out.

Is it even possible to phase out coal by 2030, as desired by the Greens, SPD and FDP? And does a coal exit even make sense?

Performance credits on the electricity market in GW according to the RES expansion plans of the traffic light coalition. 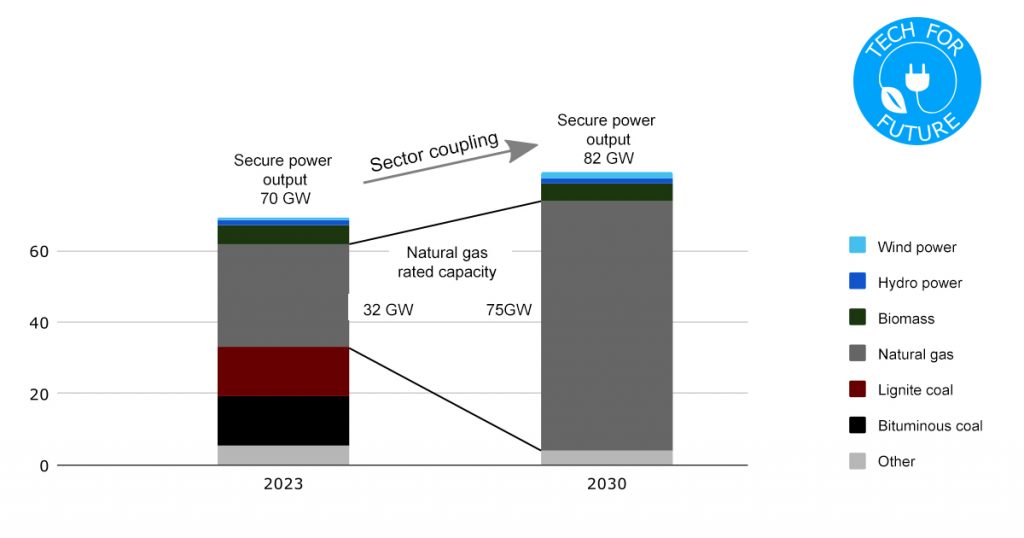 The phasing out of coal combustion by 2030, ideally, is one of the goals of the traffic light coalition. However, before one can shut down coal-fired power plants, one has to replace guaranteed output with other controllable power plants.

Fact Check: Is it realistic to add 100 gas-fired power plants? 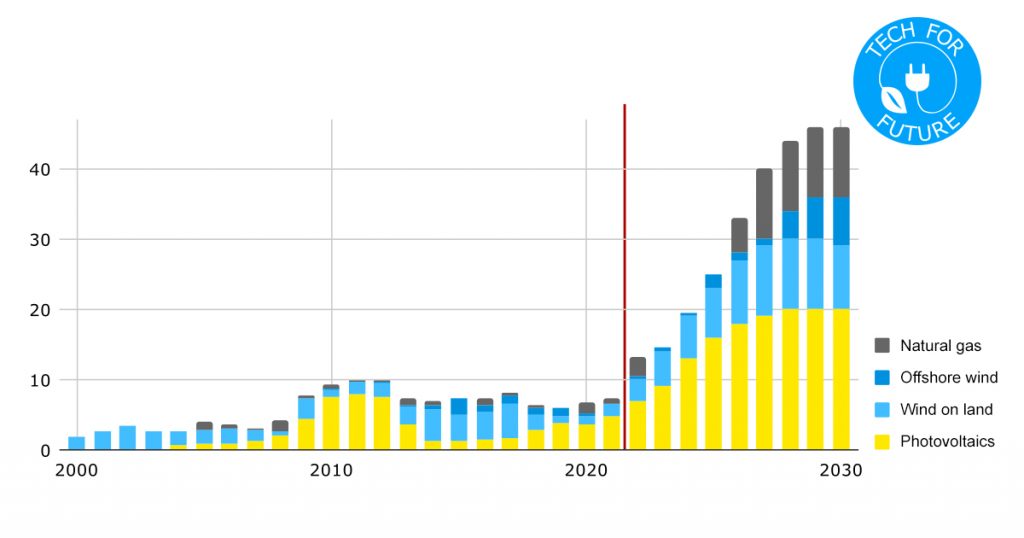 That would be by far the most massive power plant expansion that has ever been attempted anywhere in the world in such a short time. Are there enough specialized companies to maintain 100 large construction sites at the same time? Where will the skilled workers come from and where will the 100 gas turbines come from?

The addition of 100 gas-fired power plant units by 2030 seems extremely unrealistic. Even the addition of around 30 GW of natural gas by 2030 for the previously planned slow phase-out of coal by 2038 will no longer be possible. That would still be 60 of the largest gas power plant blocks.

Fig. 4. Utilization of German backup power plants (in 2030, in percent and GW)

Utilization for the expansion plans of the traffic light coalition in 2030 with weather data from 2015 to 2021. 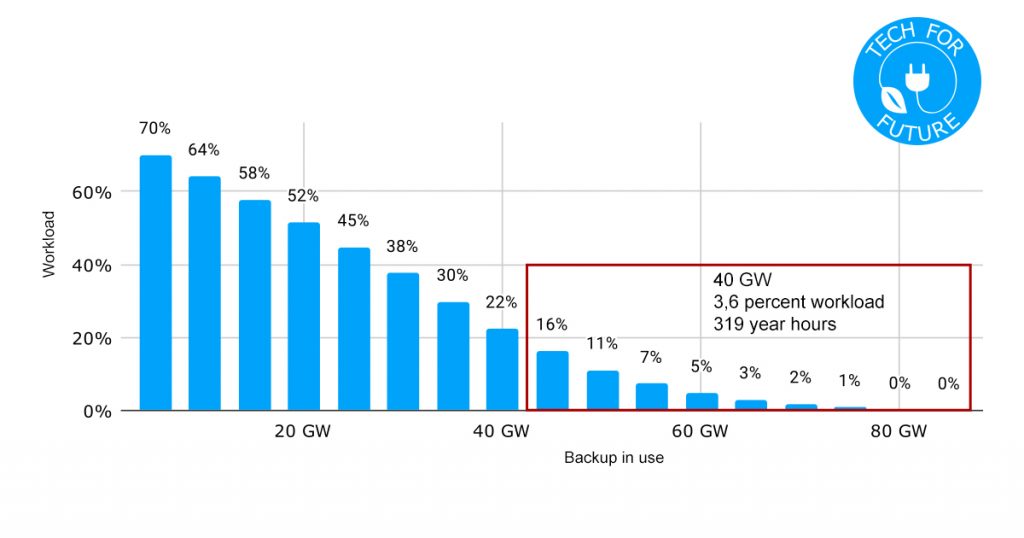 The above is a graph of the expected utilization in 2030 for backup power plants with weather data from 2015 to 2021. It is assumed that the expansion goals of the coalition in the EEG amendment 2022 will be achieved and the projected electricity consumption of 700 TWh per year as well.

The least used 5 GW power plant capacity is used on average for only 4 hours per year. Of the 6 years under review, they are actually only used in one year. The weather data from January 24, 2017 result in a 24-hour extreme situation within a longer period of dark doldrums. They stand still for the remaining 5 years.

The least used 15 GW power plant capacity is used every year, but only 34 annual hours on average. According to the coal phase-out law, 15 GW of coal-fired power plants should still be connected to the grid by 2030. If they all end up in the safety reserve, that would be no worse for the climate than building new 15 GW gas-fired power plants.

Backup CO2: How harmful to the climate is a failure to phase out coal?

Coal is the dirtiest fuel. Air pollution kills more than 10,000 people every day, many of them from burning coal. Coal also has the highest greenhouse gas emissions.

But even natural gas still emits half as many greenhouse gases as coal when accounting for methane slip. According to the Intergovernmental Panel on Climate Change, it is around 1000gCO2/kWh for coal and 500gCO2/kWh for natural gas.

By 2030 Germany has set itself the goal to reduce CO2 emissions to 440 million tons per year (climate target 65 percent reduction compared to 1990).

How many additional CO2 equivalents would the country emit if in 2030 the least used backup power plants were coal-fired instead of gas-fired?

Coal-fired power plants in reserve can save a lot of money that could be better invested in other climate protection measures. The CO2 avoidance costs of replacing 40 GW of coal reserve with newly built gas power plants are roughly estimated at around 50,000 euros per tonne of CO2 – assuming that a new gas power plant of one GW costs around one billion euros. This is extremely expensive compared to the usual CO2 avoidance costs in the two-digit or low three-digit range.

Admittedly, this is a rather naïve view. Coal-fired power plants are subject to technical limitations and cannot simply produce electricity for an hour. They also can’t be mothballed and still be ready to launch in a matter of hours. This applies in particular to lignite, where extraction and combustion are closely linked.

However, as long as we can predict dark lulls of 24+ hours for at least one day, coal-fired power plants should be operational in time. The CO2 emissions, including starting and stopping as well as any idle times, are likely to be higher. But even if it were doubled, that would still be very little.

If Germany wants to operate efficient climate protection, it should let the coal phase-out burst. The important thing is not to shut down coal-fired power plants, but to burn as little coal as possible.

If one looks at all the problems with the construction of gas-fired power plants, the phase-out of coal has already failed anyway.

100 gas-fired power plants first need to be financed, especially since it is becoming increasingly difficult to earn money with them. As already mentioned in the case of utilization, half of the gas-fired power plants are idle 95 percent of the time. On average across all backup power plants, it would a meagre 24 percent utilization – if the traffic light government expansion targets for wind and solar 2030 are achieved.

The production costs are calculated with a capacity factor of around 70 percent for combined cycle power plants and 30 percent for open gas turbines. If the gas power plants are required significantly less, the costs per kWh rise because the fixed costs for construction and maintenance account for more.

So the meagre prospects for profits no longer attract investors. Other risks of gas power plants are also not foreseeable. Activists are already protesting against natural gas infrastructure. Even the Greens and supporters of the energy transition like the DIW-economist Claudia Kemfert speak out against natural gas. And this despite the fact that natural gas is absolutely necessary for the phase-out of coal and the energy transition.

All this does not make financing easy, despite successful German greenwashing in the EU taxonomy. Germany has managed to have fossil natural gas declared as a bridging technology, even though it is harmful to the climate. This is intended to attract investors who are looking for “green” investments.

However, energy companies do not expect new construction of gas-fired power plants due to the EU taxonomy. According to the gas lobby, new construction without a capacity market is not profitable.

The construction of gas-fired power plants is made even more difficult by the planned conversion to hydrogen. According to the new federal climate minister Robert Habeck, this should happen as early as 2035, i.e. only shortly after the accelerated phase-out of coal. The combustion chambers of all newly built gas-fired power plants would have to be replaced before these power plants have even remotely amortized themselves.

From a technical point of view, the conversion to hydrogen is anything but easy. Hydrogen power plants scalable to grid size do not even exist on paper. Hydrogen embrittlement of steel is a major problem. Because of the occurrence of atomic hydrogen at high temperatures, combustion of hydrogen is even more difficult to manage than storage and transportation. These questions about the gas infrastructure are also unresolved.

The likeliest possibility currently would the addition of 25 percent hydrogen to natural gas when it is burned in large gas turbines. So far, however, only 10 percent admixture is possible in the German natural gas network, with a possible upgrade to 20 percent. Hydrogen technology seems as immature as photovoltaics in the 1980s. However, it is to be subsidized at record speed until it is ready for the market.

The stumbling blocks in developing a pure hydrogen economy could make methanation an attractive alternative. Green methane could easily be stored in natural gas networks and burned in today’s gas-fired power plants without expensive and lengthy conversions. The efficiencies are slightly worse but not significant compared to the hydrogen imports that are necessary anyway. However, the carbon capture required for this is still completely immature.

Establishing a global hydrogen economy by 2040 with pure hydrogen infrastructure and significant imports of green hydrogen sounds like a pipe dream. If that fails, we’ll stick with climate-damaging natural gas.

A 99 percent phase-out of coal would be better for the climate than a 100 percent phase-out. Neither by 2030 nor by 2038 should Germany shut down more coal-fired power plants than is necessary.

For effective climate protection, the country should keep as many coal-fired power plants as a minimally used reserve. This hardly harms the climate and saves a lot of financial resources, which can be employed with better effect elsewhere.

It doesn’t matter when we shut down the coal plants. It depends on how much coal we still burn.