No progress in reducing bureaucracy in Bavaria

In February 2022, the special representative of the Bavarian CSU/FW government for reducing bureaucracy presented his five-year report. The results of his work were more than meager: in 5 years he was only able to reduce bureaucracy in 3 relatively insignificant measures, such as facilitating the recycling of clay roof tiles and being allowed to transport maypoles without a special traffic permit.[1]

The CSU government has also allegedly advocated a more business-friendly implementation of the data protection regulation (e.g. no fines for the first violation) for SMEs, the self-employed and NGOs. However, this is contradicted by a recent position paper by the Munich and Upper Bavaria Chamber of Industry and Commerce, which states: “The exception regulated for small and medium-sized enterprises (SMEs) in Art. 30 Para. 5 GDPR does not actually apply and must be adjusted accordingly”.[2]

In areas that are really important for international competitiveness, such as ease of corporate management and red tape reduction, neither the state nor the federal government have made any significant progress.

Reduced regional bureaucracy or the disappearance of federalism?

In fact, the volume of legislative acts, a useful indirect measure of bureaucracy, has been reduced in Bavaria over the years. However, it was increased at federal and EU level. Instead of signaling a general reduction in bureaucracy, this could be an indication of an even more problematic trend: increasing centralization, de-democratization and the erosion of the liberal principle of subsidiarity.

The Association of Bavarian Business (vbw) agrees with this assessment: “Especially at the federal political level, the state currently likes to be the regulator – and is thus becoming a blocker. Measures such as the Due Diligence Act, the Works Council Strengthening Act or the quota of women on company boards unnecessarily slow down the economic catching-up process. It is therefore no wonder that the investment dynamics of German companies in foreign locations have been significantly higher than in Germany for some time.”[8]

With regard to the women’s quota and the supply chain law, two analyzes should be added: Empirical observations show that women’s quotas, i.e. “positive” discrimination, usually have the opposite effect: they usually slow down the increase in the proportion of women in management positions and STEM professions.[9]

In exactly the same way, supply chain legislation will also achieve the opposite of the hoped-for result: far from improving human rights, working conditions and ecological standards in developing countries, it will harm both the German economy and the supplier countries. On the one hand, it will have a significant impact on the already very tight value chains of German companies and further increase the costs for raw materials and intermediate products. In the worst case, up to 7 percent of German imports with a total value of 77.3 billion euros (2.3 percent of GDP or 931 euros per capita) could be affected, because these come from countries that, according to estimates by the International Trade Union Confederation (IGB) “critical to catastrophic working conditions”.[10] On the other hand, the affected German companies will have to withdraw from these supplier countries, which will push the workers there (including children) into even worse working conditions in the informal sector; as well as their gross national product, such as that of Cambodia, Vietnam and Malaysia, will be reduced by up to 1 percent.[11]

Huge cost to the economy

According to the annual report of the Regulatory Control Council from 2021, the administrative costs of the German state have risen from around EUR 1 billion in 2017 to around EUR 7 billion in 2021 (Fig. 1).[12] 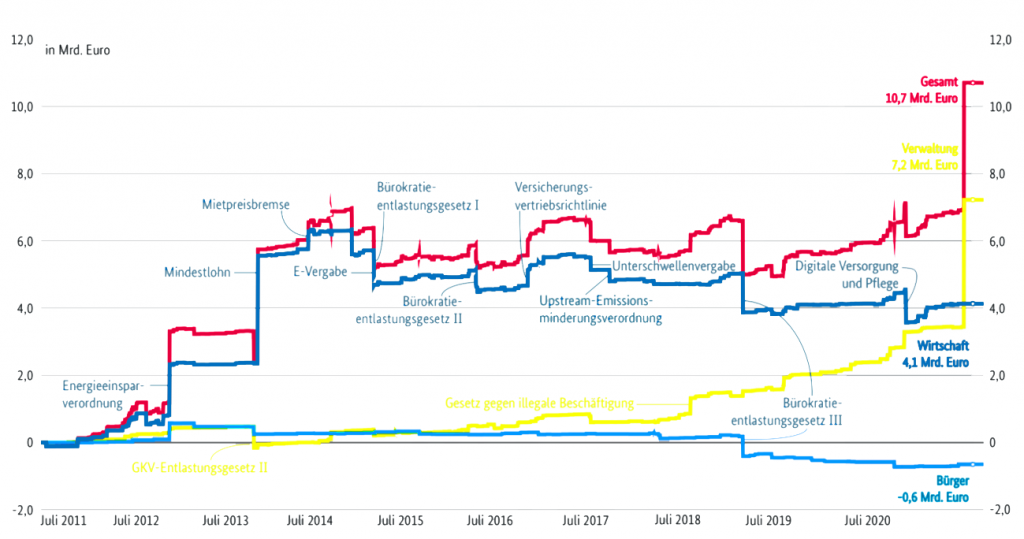 In 2021, domestic companies were burdened with annual compliance costs of around 4 billion euros due to the follow-up costs of statutory regulations. Converted, this corresponds to approx. 0.1 percent of GDP. According to calculations by the DIHK, in March 2020, shortly before the Corona restrictions, the excessive bureaucracy cost a typical company around 2.5 percent of its turnover.[13] Depending on the industry, the burden could even rise to 6 percent of annual sales. In the medium-sized hospitality industry alone, the annual bureaucratic burden of typical companies is between 12,000 and 60,000 euros per year.

The bureaucratic effort is unequally distributed among the companies. For large corporations, which usually have their own departments that only serve to process bureaucratic requirements, bureaucracy is a much lower relative fixed cost than for small and medium-sized, mostly family-run companies, which spend a much larger proportion of their time and thus their productivity on completing it of the “paperwork”. According to the Regulatory Control Council, small businesses (less than 50 employees) shoulder up to ten times the administrative costs per employee than larger companies (over 250 employees).

In the Government Regulation category, which includes sub-scores such as Bureaucracy Costs, Cost of Tax Compliance and Starting a Business, all part of the Fraser Institute’s Economic Freedom Index, Germany’s score progressively deteriorated : The ranking slipped from 14th place in 2000 to 17th place in 2010 and reached 22nd place in 2019.[16]

According to the monitoring report “Industrial location quality of Bavaria in an international comparison – dynamic ranking” by the vbw from 2021, Bavaria can only achieve a midfield placement in the “State” area, unchanged from previous years. With 19.7 points, Bavaria comes off average and comes in just behind Germany (20.0 points, 21st place). In the field of regulatory frameworks, developments elsewhere are more dynamic.[18]

Reducing bureaucracy, especially for small and medium-sized companies, is a key aspect of the AfD’s economic policy program. The proposed measures include: simplifying and speeding up the process of setting up a business (from 9 to 5 steps and from 8 to 3 working days), abolition of certain notary obligations for business founders, standardization of threshold values ​​for SMEs, expansion of small business regulations, reduction of retention periods for SMEs, abolition of the receipt -Mandatory introduction of a corona-related moratorium on bureaucracy, abolition of the German and (planned) EU supply chain laws and the fullest possible return of national sovereignty over business regulatory competences.

The effects of these qualitative debureaucratization measures can be quantified using the empirical results of a regression analysis by Adepoju U. (2017).[19] So if the AfD’s deregulation efforts as Germany’s improvement in the World Bank indicators “Starting a business”, “Dealing with construction permits” and “Regulatory quality” were improved to the average level of the OECD high-income countries, this would increase the domestic GDP by 0, 4 percent (13.2 billion euros) and make every citizen 160 euros richer.

Of course, digitization is an essential building block for reducing visits to authorities. Accelerating the digitization of the economy as one of the most important growth drivers of the 21st century is a key aspect of the Blue Deal. Accordingly, the AfD calls for the following measures in its election program and according to parliamentary motions: an expansion of public services through e-government; a harmonization of digital standards, models and platforms at state, federal and European level; the removal of strict GDPR requirements; the creation of a federal digital agency GmbH and a data trustee for the processing and exchange of big data,[20] as well as the acceleration of broadband connectivity, especially in the area of ​​”fiber-to-premises” and in rural areas.

The possible economic effects of implementing these measures can be quantified with regression analyzes using the DESI panel data and on the basis of research results for the Federal Ministry for Digital and Economic Affairs.[21] Accordingly, if by 2025 Germany would reach the same level of digitization as Austria in the areas of e-government, integration of digital technology and human capital, as well as Sweden in the areas of connectivity and internet use, then the German GDP would be 1.9 percent higher (61 .8 billion euros) or almost 750 euros per capita.

Taken together, the AfD’s deregulation agenda as part of its Blue Deal reform program would relieve the German economy by around 75 billion euros (2.3 percent of GDP), making every citizen around 910 euros more prosperous per year.