Do automation technologies constitute an opportunity or a threat for developing countries? This analytical note uses data on Indonesian manufacturing firms to document a positive impact on employment of adopting robots. This finding contrasts with the existing evidence of negative impacts in economies at relatively advanced stages of automation, and could be explained by diminishing returns to robots, given the relatively low robot adoption in Indonesia.

Ever-more ubiquitous automation technologies present the economies that adopt them with an apparent trade-off between firm-level productivity gains (Acemoglu et Restrepo 2020, Koch et al. 2019) and adverse employment impacts due to the labour-saving nature of automation (Acemoglu and Restrepo 2020, Dauth et al. 2017). This trade-off has so far been documented in countries at a relatively advanced stage of automation.1

Yet, it is not clear that the existing evidence on the impacts of automation provides useful guidance for countries at earlier stages of automation, which include most developing countries today. Given that automation technologies may be subject to strong diminishing returns (Graetz and Michaels 2018), their adoption may be more likely to increase labour demand in countries at early stages of adoption. Figure 1 provides some suggestive evidence in support of this idea focusing on industrial robots, an important class of automation technology. It shows that the correlation between robot penetration and employment is negative for OECD countries, which have higher robot penetration, and positive for non-OECD countries. 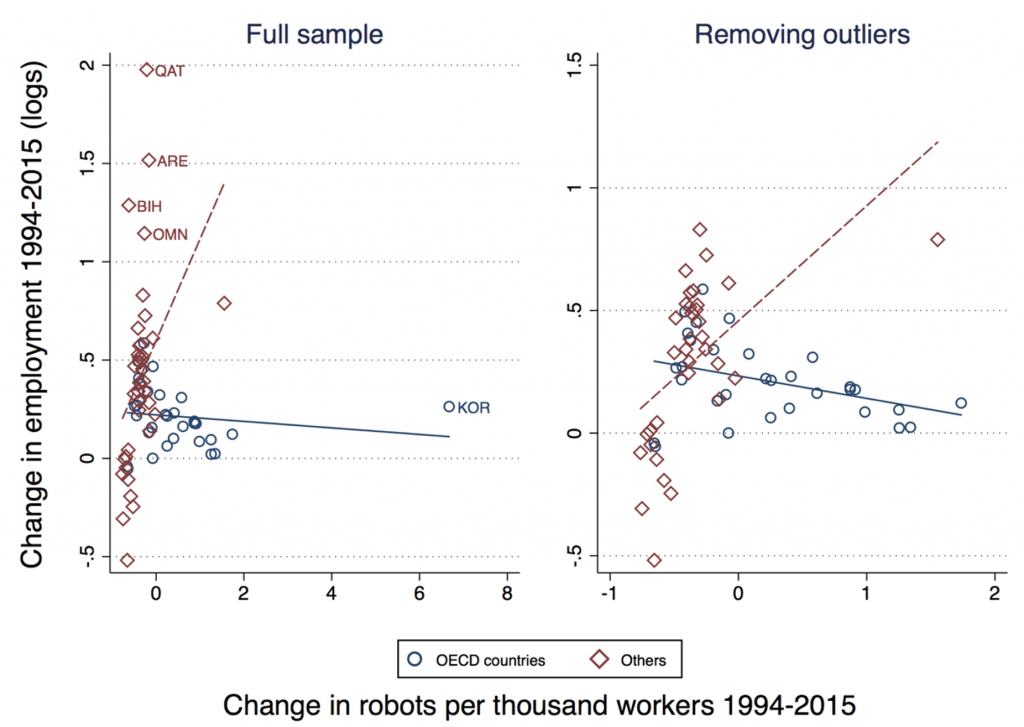 Note: The figure plots the correlation between the change in residuals from a regression of log-employment on the share of population above 55 years old over population between 20 and 49 years old, and changes in robot penetration over the same period. Robot penetration is defined as the stock of industrial robots per 1000 employed workers. Sources: International Federation of Robotics; Penn World Table; World Bank.

This is an important knowledge gap as the penetration of automation in developing countries is expected to grow significantly over the coming decades (Hallward-Driemeier and Nayyar 2017). In a recent paper (Calì and Presidente 2022), we help to fill this gap by examining the impact of robots’ adoption on employment in Indonesian manufacturing. We focus on the late 2000s-early 2010s, when the penetration of robots in Indonesia was considerably lower than in the other countries with available micro evidence.

Figure 2 illustrates the extent of this discrepancy by plotting the number of robots per million manufacturing workers in the first (whenever available) and last years of the existing analyses in each of these countries. The data for robots come from the International Federation of Robotics (IFR), which collects data on robot imports from each national robotics association. The data for manufacturing employment are from the International Labour Organization (ILO) and, for China, from the United Nations Industrial Development Organization (UNIDO). Taking the last years of the analyses, for example, which are close in range for most countries, Indonesia’s robot penetration was the lowest in the sample by a factor ranging between 9 (relative to Mexico in 2015) and 99 (relative to Germany in 2014). And similar differences apply also when taking the first years of the analyses.

Figure 2. Robot penetration in Indonesia vs other countries with evidence on the impact of automation 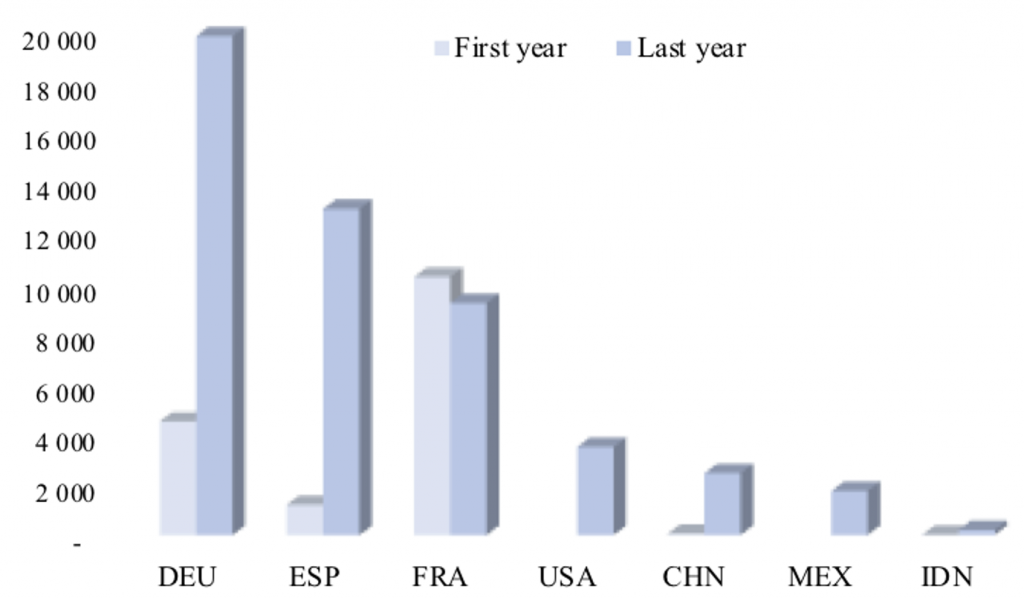 Another interesting feature of the Indonesian context is that the total number of robots increased significantly after 2010, with the total stock increasing almost ten-fold between 2008 and 2015. This acceleration was highly heterogeneous across sectors. By the end of the sample period in 2015, the penetration of robots in the most automated industries, such as Motor Vehicles, was comparable to that of advanced economies. Other industries, such as Textiles, have seen no penetration throughout the period.

To identify the effects of robot penetration on local employment, we focus on regencies, which are the second level of sub-national administrative division in Indonesia and approximate local labour markets reasonably well.2 In line with previous literature, we construct a regency-specific robot exposure measure by interacting baseline industry shares in employment at the regency level with annual industry-specific robot imports (Acemoglu and Restrepo 2020, Dauth et al. 2017). We then regress changes in regency-level employment in 2008-15 on changes in this robot exposure over the same period, controlling for various time-invariant and time-varying factors. We also address the plausible endogeneity of the robot measure by instrumenting it with the average industry-specific robot penetration in OECD countries, which are ahead of Indonesia in terms of robot adoption.3

In contrast to the available micro evidence in other countries, our analysis documents a positive manufacturing employment effect of robot adoption across Indonesian local labour markets. The magnitude of the estimated coefficient in our preferred specification implies that employment grew 31 percentage points more in regencies with one additional robot per 1000 base-year workers over the 2008–15 period (significant at the 1%  level). We assess in detail the validity of the identification (Goldsmith-Pinkham et al. 2020) and perform a large battery of tests, which provides confidence on the robustness of the positive employment effect of robots.

Diminishing returns to automation and the positive employment impact

What can explain the difference with the existing empirical results from other countries? As hinted above, Indonesia’s result could be consistent with diminishing returns to robot adoption in a context with low robot penetration during the period of analysis.

A simple task-based model along the lines of Acemoglu and Restrepo (2018) captures the key intuition. Consider an economy with a fixed set of tasks performed by workers ordered by increasing level of complexity (i.e. from routine to highly sophisticated tasks). At low levels of automation (that is, with low shares of automated tasks), an additional robot would replace workers in a routine task where humans have low comparative advantage. As a result, the productivity gains of robot adoption are relatively large. The gains become smaller at higher levels of automation, as robots displace workers with increasing levels of comparative advantage at performing their tasks. At the same time, the displacement effect of robots increases as the range of tasks performed by humans shrinks due to automation, and so the marginal product of labour decreases as workers become redundant. With productivity gains decreasing and displacement effects increasing with automation, the net returns to robot adoption diminish, and hence the employment effects become more negative.

We test this hypothesis using Indonesia’s extensive panel data of manufacturing plants. Unlike other studies in high-income countries, we do not observe the use of robots by plants. Instead, we develop a measure of plant-level exposure to robots based on Graetz and Michaels’ (2018) definition of occupations’ ‘replaceability’ by robots. Using Indonesian labour force survey data, we document that secondary-educated workers dominate occupations at high risk of automation in Indonesia. We use this observation to construct a plant-specific measure of exposure to automation, by interacting industry-specific annual robot imports with the baseline share of secondary workers at the plant level. We provide various pieces of evidence consistent with the finding that occupations at risk of automation are dominated by secondary-educated workers. For instance, industries with an initial large share of secondary-educated workers adopted relatively more robots in subsequent years. Similarly, industry average investment in machinery and equipment, which includes investment in robots, is positively correlated with industry imports of robots.

We regress yearly plant-level employment on the robot exposure measure controlling for a wide array of fixed effects, including plant and industry-year effects, downstream exposure to robots and a plant-level index of technological sophistication to capture possible confounders. The results imply that on average, one additional robot per 1,000 workers increases the plant’s employment by 1%. The effects appear to be driven by the large increases in productivity resulting from automation. On average, one additional robot per 1,000 workers increases total factor productivity (in quantity terms) by 7% and reduces real marginal costs by 10%.

The analysis also supports the hypothesis of diminishing returns to automation. The employment elasticity of robot adoption becomes less positive for plants above the 8th decile of the distribution of initial exposure to robots (Figure 3). For plants in the top decile, one additional robot per 1,000 workers is associated with a positive but not statistically significant employment elasticity of robot adoption. We observe a similar pattern for productivity.

Thus, the positive impact of robot adoption on local manufacturing employment appears to be driven by plants with high levels of untapped automation possibilities. In a country at the initial stage of automation, such as Indonesia, these plants represent the bulk of the entire manufacturing sector population. 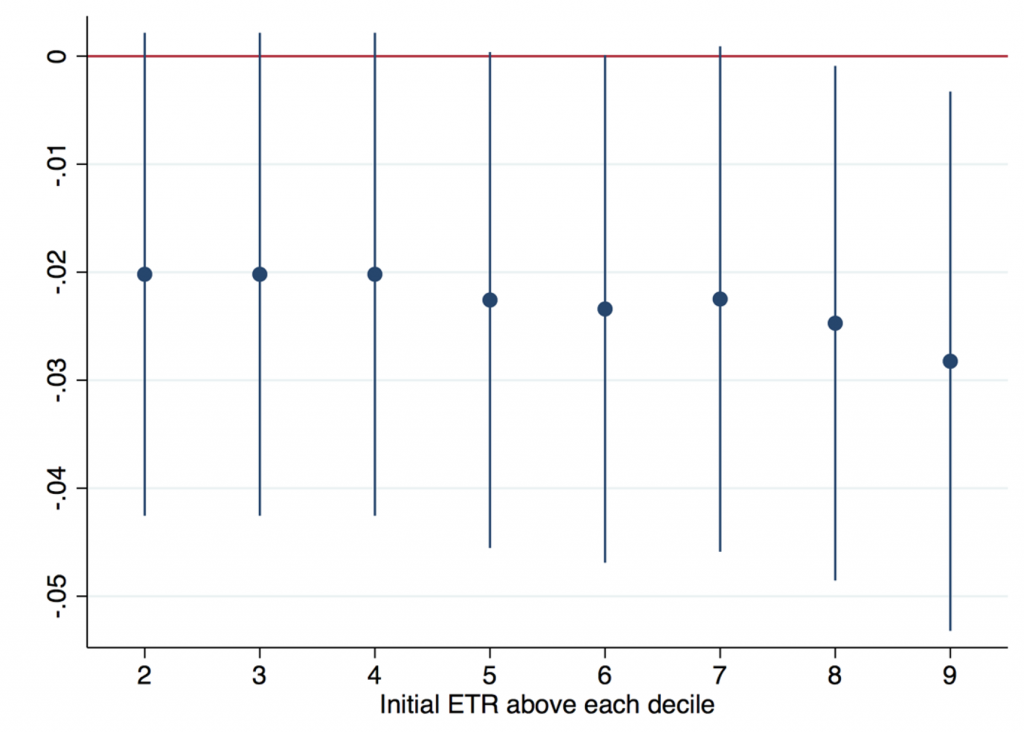 Note: The figure shows point estimates and 90% confidence intervals of the interaction between exposure to robots and a categorical variable representing whether initial exposure to robots is above each decile of its distribution. Source: authors calculations based on Statistik Industri and IFR.

Finally, we examine the possible external validity of these results. To that end, we analyse the relation between employment and robot imports across 61 OECD and non-OECD economies in 12 industries over the 2007-15 period. The analysis is based on a 2SLS estimator, instrumenting robot density with a leave-out mean constructed from the same industry-year pairs in other countries. The findings suggest significant diminishing returns to automation across countries as well. Robot adoption is negatively associated with manufacturing employment in OECD countries – particularly at high levels of penetration – and positively in non-OECD countries (Figure 4). 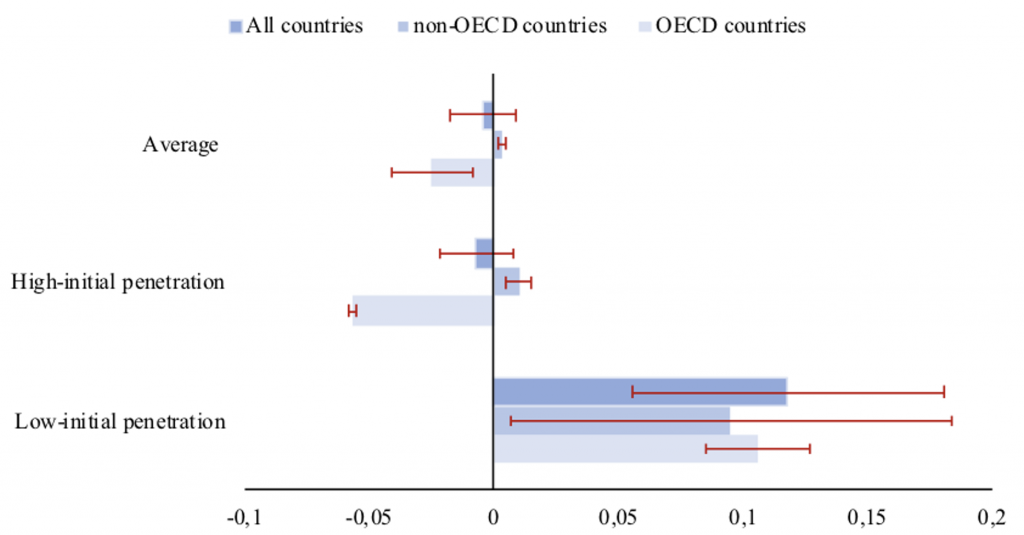 Note: The figure shows 2SLS estimates of the impact of robot penetration and 90% confidence intervals in a sample of 61 countries and 12 industries, from 2007 to 2015. Sources: authors’ calculations based on IFR, OECD Structural Analysis Database, Statistik Industri.

While suggestive, these results cast some doubt on the idea that adoption of automation technologies in developing countries impairs their demand for labour as they move from very low to higher automation rates (Diao et al. 2021). Additional data on firm-level robot adoption in developing economies, particularly those at early stages of industrialisation, would be necessary to test this hypothesis in other contexts.

Hallward-Driemeier, M and G Nayyar (2017), “Trouble in the Making? The Future of Manufacturing-Led Development”, World Bank.

2 During the period of our analysis regencies had an average population of around 800,000 and labour exhibited low mobility across them. Second, following Indonesia’s 1999 decentralisation reforms, regencies held significant administrative powers, including in the labour markets, such as the minimum wage setting. Indonesia’s labour force survey (Survei Tenaga Kerja Nasional—Sakernas) collects annual data representative at the regency level.

3 To construct the instrument, we match IFR data with 2-digit industry employment figures from the OECD Structural Analysis Database (STAN). For each industry-year pair, we compute the number of imported robots per thousand workers, averaged across OECD countries.