Investing in education and human capital is an important ingredient for economic growth. This analytical note constructs a new aggregate stock measure of human capital data using OECD data on adult skills, quality of education, and mean years of schooling. The relative weights of quality and quantity are estimated rather than imposed, as they are in the existing literature. Improvements in human capital are estimated to boost productivity significantly, but only with long lags. Furthermore, simulating the impact of pre-primary education on human capital and productivity demonstrates the usefulness of the new measure for policy analysis.

It is widely believed that investing in education and human capital is critical for economic growth (Akcigit et al. 2020, Porzio and Rossi 2022) but given lags involved in the education-work lifecycle, it is hard to evaluate the payoff and for policymakers to justify the huge expenditures. It is also fair to say that measuring human capital is challenging. The empirical literature aimed at constructing a measure of human capital at the country level has combined quantity (such as mean years of schooling) and quality (typically internationally standardised test scores) components either using arbitrary, most often equal, weights (Filmer et al. 2018, Reiter et al. 2020, Angrist et al. 2021) or by including them separately in estimations, usually with the implausible outcome that one component is dominant and the other completely insignificant (Coulombe et al. 2004, Hanushek and Kimko 2000, Hanushek and Woessmann 2007, 2012, Fournier and Johansson 2016, Botev et al. 2021). A further weakness of many studies that try to incorporate notions of quality into measures of the human capital stock is that they are based on contemporaneous flow measures that most often relate to students tested at age 15, which are unlikely to be representative of the skills of the entire (and older) working age population.

In a recent work (Égert et al. 2022), we address these two weaknesses by constructing a new stock measure of human capital that makes use of OECD data from the Programme for International Student Assessment (PISA) and the Programme for the International Assessment of Adult Competencies (PIAAC). Improving aggregate measures of human capital is important given the central role that education, training, and skills play as a driver of economic performance.

The new measure is a cohort-weighted average of past PISA scores (representing the quality of education) of the working age population and the corresponding mean years of schooling (representing the quantity of education). Contrary to the existing literature, the relative weights of the quality and quantity components are not imposed or calibrated but are estimated directly. Our calculations involve three stages.

Second, PIAAC test scores are regressed on matched PISA test scores and mean years of schooling. The estimation results show that the elasticity of the stock of human capital with respect to the quality of education is three to four times larger than for the quantity of education.

Third, these estimated elasticities are used to construct an aggregate time series stock measure of human capital by cumulating quantity and quality measures across all cohorts in the working age population.

This approach relies on combining data from both PISA and PIAAC in order to overcome inherent problems with using either in isolation. On the one hand, PIAAC provides a measure of skills for the entire adult working age population, but has no time series and limited country coverage, hence ill-suited for empirical regression analysis. On the other hand, PISA only applies to those aged 15 but, very importantly, especially when combined with similar international test scores, has a more extensive time series and country coverage.

Figure 1. The new measure of the stock of human capital 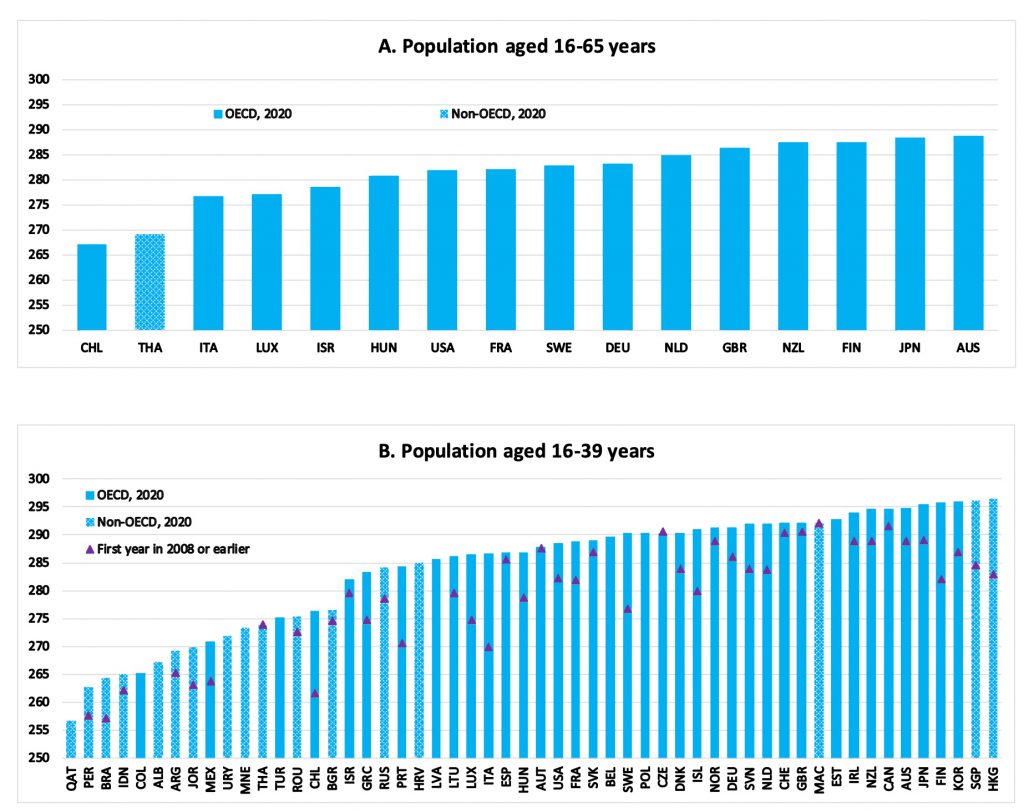 Note: The stock of human capital is calculated as the cohort-weighted average of student test scores and mean years of schooling, both adjusted for the coefficient estimates linking them to PIAAC adult test scores to PISA student test scores (log-log specification with country fixed effects, transformed from log to levels). The first years in panel B range from 1987 to 2008.

The new measure of human capital shows a robust positive correlation with productivity for OECD countries in cross-country time-series panel regressions, suggesting that improvements in human capital are accompanied by macroeconomic productivity gains.

Another finding is that gains in productivity through the human capital channel can be of the same order of magnitude as from improving product market regulation, again using the same benchmark of closing the gap between the median and the top three performing OECD countries. The lags are, however, also typically much longer from the human capital channel, particularly because it takes almost five decades before a sustained improvement in student skills is fully reflected in improvements in the skills of the entire working age population (Figure 2). These long lags can be shortened by putting more emphasis on adult learning including life-long learning and upskilling of the existing workforce, improving human capital at older ages.

Change in multi-factor productivity (in percent) 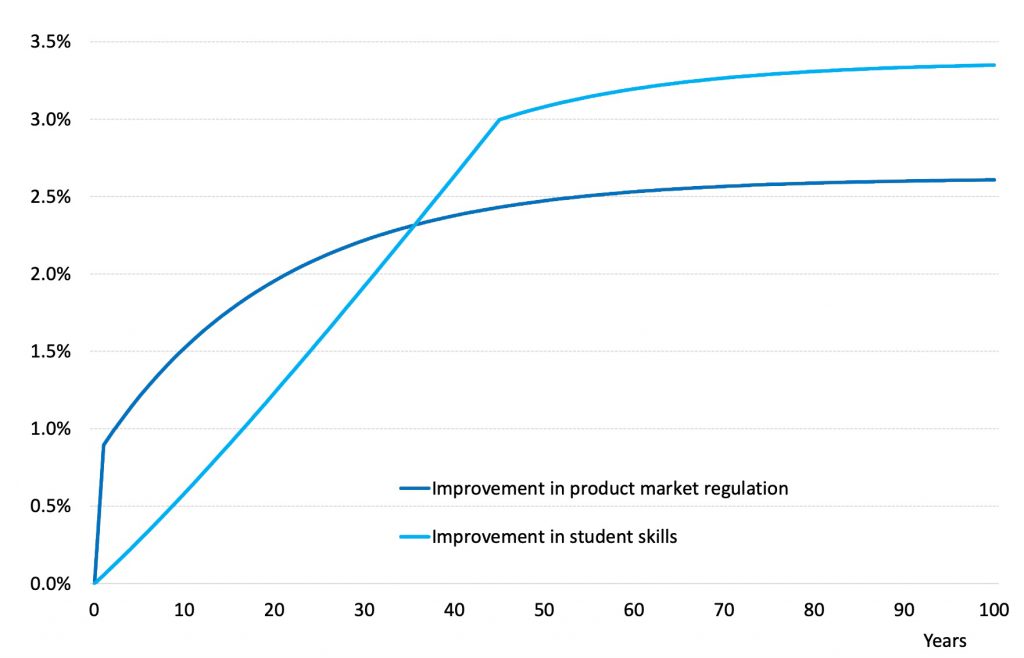 Note: The chart displays the dynamic response of multi-factor productivity (MFP) to a standardised shock to student skills and product market regulation. The shocks are standardised by calibrating the magnitude of the shock as the difference between the OECD median country and the top three performing countries in terms of the shocked indicator. The shock to human capital assumes that skills are upgraded gradually as students enter the workforce.

Assessing the effect of education policy reforms on human capital and productivity: The illustrative example of pre-primary education

An attractive feature of the new stock measure of human capital is that it opens up new avenues for evaluating the effect of education policy reforms on productivity and per capita income. Any education policy, which can be measured quantitatively through an indicator and linked to changes in student test scores, can be related to the new measure of human capital and so to productivity.

We use pre-primary education as an illustrative example. The first step in the quantification of the effect of pre-primary education attendance may be provided by the existing empirical literature using microeconomic student-level data, which finds that students previously enrolled in pre-school for more than one year perform better in student skill tests, improving their test scores by between 8.2 and 9.6 points (Schütz 2009, Fuchs and Woessmann 2007, Hanushek and Woessmann 2006, André et al. 2019). This corresponds to an increase of 1.7 to 1.9 percent compared to the OECD median PISA score in 2018.

In order to assess the policy effects on the stock of human capital and multi-factor productivity from reforming pre-primary education, two scenarios are considered: i) closing the gap between the lowest level of pre-primary attendance observed in the OECD (9 percent in Turkey) and the average of the top three performers (84 percent, Spain, France, and New Zealand) and ii) closing the gap between the median OECD country (72 percent in Austria) and the average of the top three performers. Results indicate that a sustained effort to increase attendance in pre-primary education boosts productivity in the long run between 0.9 and 2.2 percent for the first scenario, and gives rise to a more limited increase of 0.1 to 0.3 percent in the second scenario.

Future work will focus on a systematic evaluation of a wide range of education policies on the new measure of human capital and macroeconomic outcomes as well as considering how adult training policies impact on human capital.

Fournier, J-M and A Johansson (2016), “The effect of the size and the ix of public spending on growth and inequality”, OECD Economics Department Working Paper No. 1344.

Porzio, T and F Rossi (2022), “From farms to offices: Measuring the role of human capital for structural transformation”, VoxEU.org, 28 March.

1 There are a limited number of countries (16) with a sufficiently long time series of student test scores to be able to construct the measure for the full working age population. This implies a trade-off. A comprehensive measure covering the entire working age population can only be computed for 15 OECD countries. A measure covering those aged 16 to 39 is available for a total of 54 OECD and non-OECD countries in the last available year, and 12 countries have data series for more than 20 years and an additional 27 countries are covered for about a decade.