Growing economic nationalism and protectionism in recent years have tested the resilience of global value chains. This policy note argues that policies that are supportive of rather than hostile to trade could prove critical to strengthen a recovery from the pandemic and reduce extreme poverty in developing countries. Measures to enhance trade could boost integration into global value chains, increase incomes, and lift over 21 million additional people out of poverty by 2030. A more supportive environment for trade also boosts resilience to future supply shocks by supporting diversification and widening access to raw materials, goods, and services.

In recent years, extreme weather events and trade tensions spurred by growing economic nationalism and protectionism have tested the resilience of global value chains (GVCs). The sudden and massive Covid-19 induced drop in global trade in the first half of 2020 dealt them another blow (WTO 2020), prompting predictions that the pandemic would result in restructuring of the GVCs, shortening the supply chains, and leading to reshoring (Javorcik 2020, Kilic and Marin 2020). Then, as the world economy was still recovering from Covid-19, the war in Ukraine caused more major disruptions to GVCs, hitting developing countries particularly hard (Chepeliev et al. 2022, Ruta 2022).

Recent studies suggest that GVCs transmit shocks to production and trade from one country to another. On the other hand, participation in GVCs may soften the blow of a domestic shock such as a lockdown (Espitia et al. 2021) or natural disaster like the 2011 earthquake in Japan (Freund et al. 2021), by ensuring access to critical inputs when foreign markets are closed. GVCs can also drive a recovery, spreading the benefits as countries emerge from lockdowns or lift trade restrictions at varying paces.

What further shocks to GVCs should we expect in coming years? Is it possible to design policies to help developing countries enhance resilience to trade shocks without endangering growth?

The risk of reshoring and the fruits of liberalisation

A possible reshoring of production by the leading economies and China would have a negative impact in most regions, with real income decreasing by 1.5% worldwide. A localised world takes the biggest toll on developing countries with the Middle East and North Africa, Rest of East Asia and Pacific, and Europe and Central Asian regions being hit the most severely (Figure 1). However, countries subsidising domestic production would also be worse off as reshoring decreases trade and income, limits the variety of products available to producers and consumers, and increases prices.

To counter the impact on regions that are highly dependent and integrated into GVCs, developing countries may be tempted to respond with their own reshoring policies. But such a response would only compound the damage done when leading economies re-shore production (Figure 1). Developing countries have an alternative. They could mitigate the damage by adopting policies that are more GVC-friendly and support greater integration. This response would produce gains across all developing regions.

Figure 1. Percent change in real income under various scenarios relative to baseline in 2030 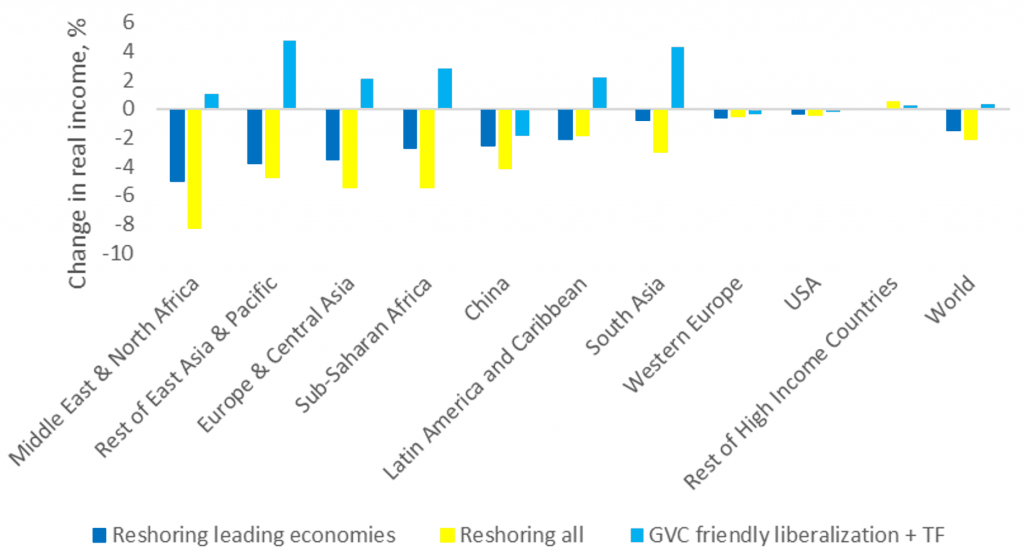 In the ‘Reshoring all’ scenario, the global average GVC participation rate for the sectors highly involved with GVCs1 could fall by over 6% in 2030 relative to the baseline. The ‘Reshoring leading economies’ scenario could have a moderate positive impact on GVC participation in selected countries. As trade shifts toward higher-value and more GVC-integrated goods like computers and electronics, Malaysia, Thailand, and Vietnam all become more integrated into GVCs (Figure 2).

It is through ‘GVC friendly liberalisation and trade facilitation’ efforts, when a major positive impact on the GVC participation for sectors under consideration is observed (Figure 2). For most developing countries, corresponding increase in GVC participation is above 10%. Leading economies also see substantial gains, with China benefiting the most with a GVC participation rate increase of more than 20%. Deeper GVC participation translates into faster growth.

Figure 2. Percent change in the global value chain participation rate relative to the baseline scenario in 2030 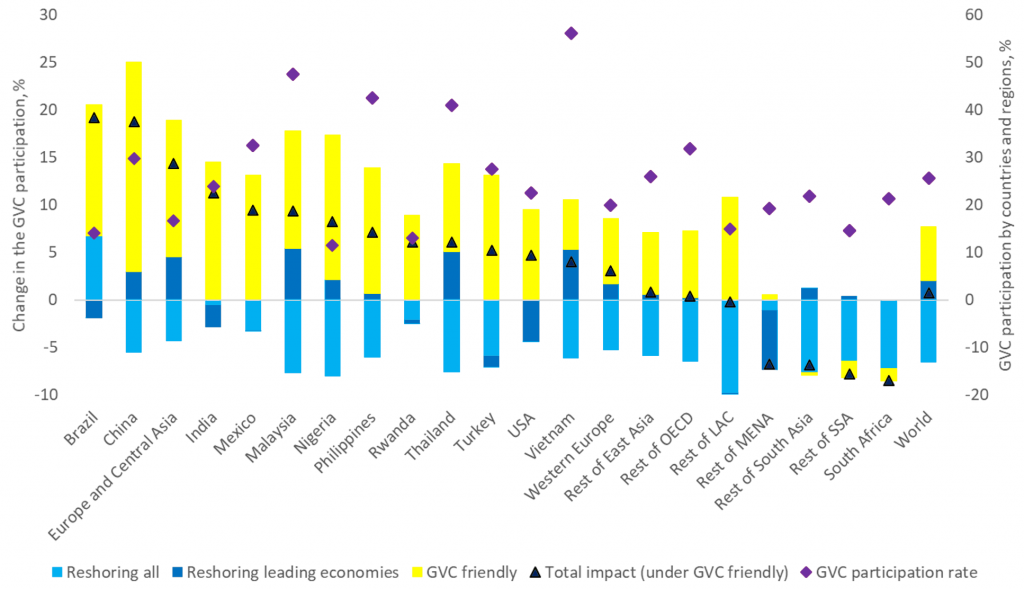 In the ‘Reshoring all’ world, countries face higher trade barriers and have less ability to substitute between domestic and imported commodities or to choose among different import sources. In the ‘GVC-friendly’ world both developed and developing regions are more resilient in the face of disruptions in production or supply chains.

We showcase such differences by looking into a stylised experiment of a supply shock to Thailand’s electronics sector (10% reduction in total factor productivity in 2027) in a similar way in which the floods limited the output of electronics in Thailand in 2010 (e.g. Haraguchi and Lall 2015). We show that in a globalised world, the real income of Thailand’s consumers declines less than in the localised world, indicating a higher level of economic resiliency.

Due to the lower trade barriers and higher trade substitution possibilities, the output of Thailand’s electronics falls more in the ‘GVC-friendly’ world. At the same time, the output of all other sectors increases substantially (compared to the ‘Reshoring all’ scenario) as some resources are shifted away from electronics production. While exports of electronics are hit more in the ‘GVC-friendly’ world, exports of other goods increase, and the export-to-import ratio also grows faster for these sectors (Figure 3). Thailand’s real income is affected less dramatically in the liberalised world.

Figure 3. Impact on the economy of Thailand in 2027 (percent change relative to the corresponding scenario without shock)

Reshoring efforts could also jeopardise the goal of poverty elimination. By 2030, reshoring efforts by leading economies would lead to an increase in the number of people living in extreme poverty by 19.4 million (Figure 4, Panel A). Under the ‘Reshoring all’ scenario, 51.8 million additional people would fall into extreme poverty by 2030, the equivalent to a 0.6% increase in the global extreme poverty headcount ratio. Sub-Saharan Africa is the most affected region under reshoring policies, accounting for around 80% of the new poor, followed by South Asia and the Middle East and North Africa region.

The ‘GVC-friendly’ scenario, on the other hand, could lift 21.5 million people from extreme poverty by 2030. South Asia, which has been hit particularly hard by the Covid-19 pandemic, benefits the most in terms of poverty eradication in the globalised world. In addition, we find that 56.2 million would graduate to global middle-class status, measured as individuals with a per capita consumption of more than PPP $10.00 a day. More than half of the new entrants in the global middle-class, or 30.9 million, would be in South Asia, and between 6.3 and 7.2 million would come from each of the three other developing regions. 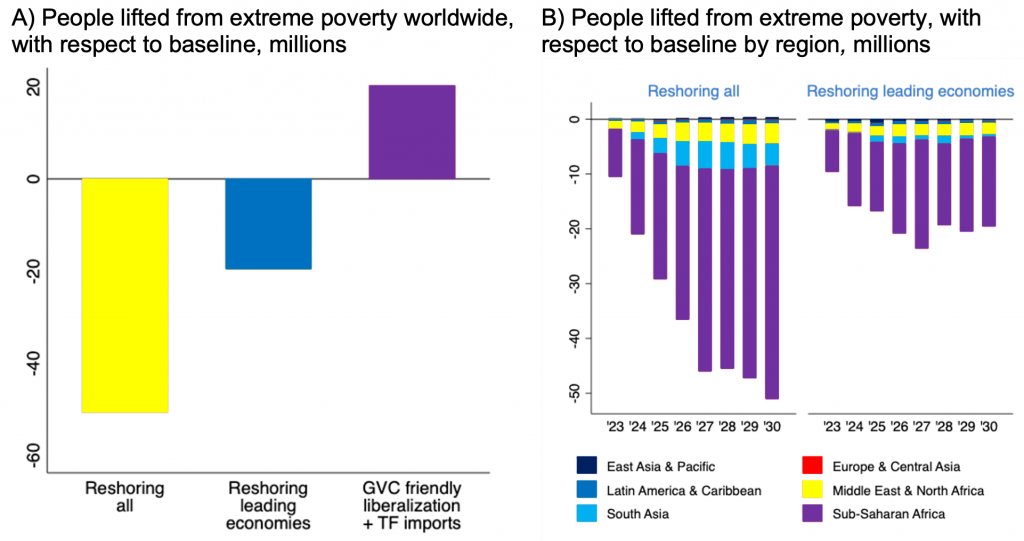 The Covid-19 pandemic, trade tensions, wars, and extreme weather events all test the resilience of GVCs. Serving both as transmitters and buffers of external disruptions, GVCs can endanger future economic growth by transmitting negative production and trade shocks from one country to another. They can also drive growth by spreading the benefits of the recovery policies across countries.

While recent and ongoing events have taken a heavy toll on the world economy, fuelling an already heated debate around the benefits and costs of global supply chains, GVC restructuring in the form of reshoring is not the solution. If on a post-Covid recovery path leading economies and China decided to re-shore production, this would have a harmful impact on most countries, particularly in developing regions, leaving them more vulnerable. Having all economies re-shore would compound the damage.

Chepeliev, M, M Maliszewska and M Seara e Pereira (2022a), “Agricultural and energy importers in the developing world are hit hardest by the Ukraine war’s economic fallout”, VoxEU.org, 06 May.

Freund, C, A Mattoo, A Mulabdic and M Ruta (2021), “Natural Disasters and the Reshaping of the Global Value Chains”, World Bank Policy Research Working Paper no. 9719.

Haraguchi, M and U Lall (2015), “Flood Risks and Impacts: A Case Study of Thailand’s Floods in 2011 and Research Questions for Supply Chain Decision Making”, International Journal of Disaster Risk Reduction 14: 256-272.

Javorcik, B (2020), “Global supply chains will not be the same in the post-COVID-19 world”, in R Baldwin and S Evenett (eds.), COVID-19 and Trade Policy: Why Turning Inward Won’t Work, CEPR Press.

1 In our sectoral representation, these include processed food, textiles, leather and wearing apparel, wood and paper products, chemicals, electronics, motor vehicles, transport equipment, and other manufacturing.

The views expressed in this column are those of the authors and they do not necessarily represent the views of the World Bank Group.