Germany’s low natality rate has been a major source of concern for politicians for decades. Using longitudinal data from the German Socio-Economic Panel, this analytical note analyses the effects of trade integration on family choices in Germany. We find that exposure to greater import competition from Eastern Europe led to worse labour market outcomes and lower fertility rates. The trade effects are concentrated among men, low-educated, and full-time employees.

Over the last few decades, we have observed a dramatic decline in marriage and fertility rates in many advanced economies (see Figures 1a and 1b).

The natality crisis and its demographic consequences have fostered a large number of studies analysing the possible relationship between labour demand shocks and fertility choices. In seminal works, Wilson (1996) and Wilson et al. (1986) highlighted the role played by the secular decline of manufacturing in reshaping family structure. 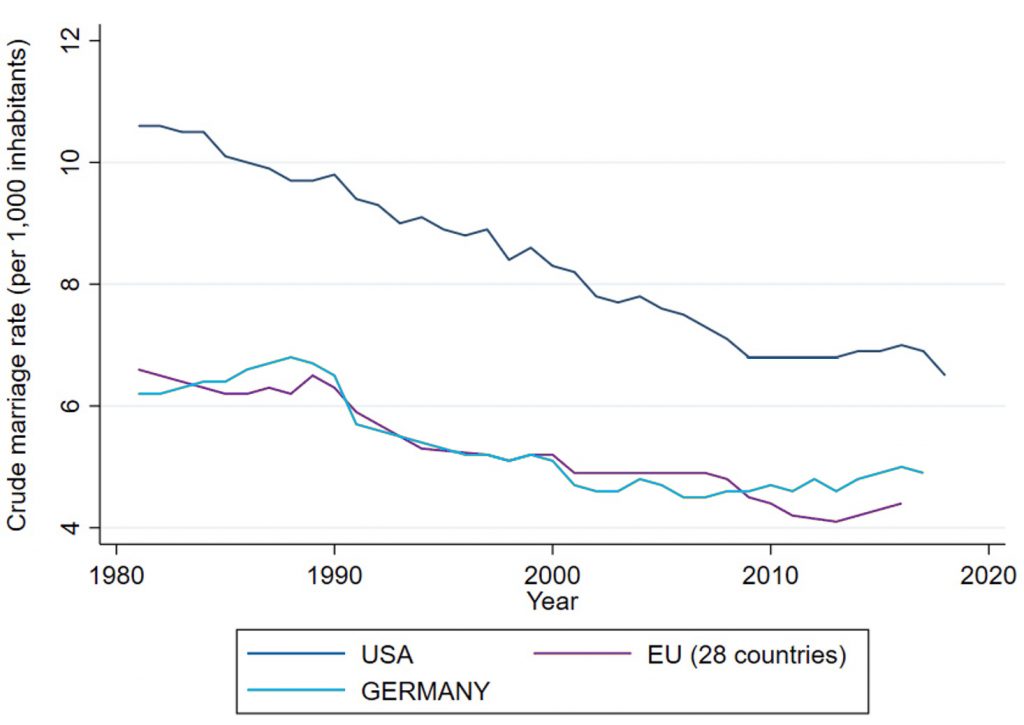 Figure 1b. Evolution of fertility rate in Germany and the world (between 1960 and 2020) 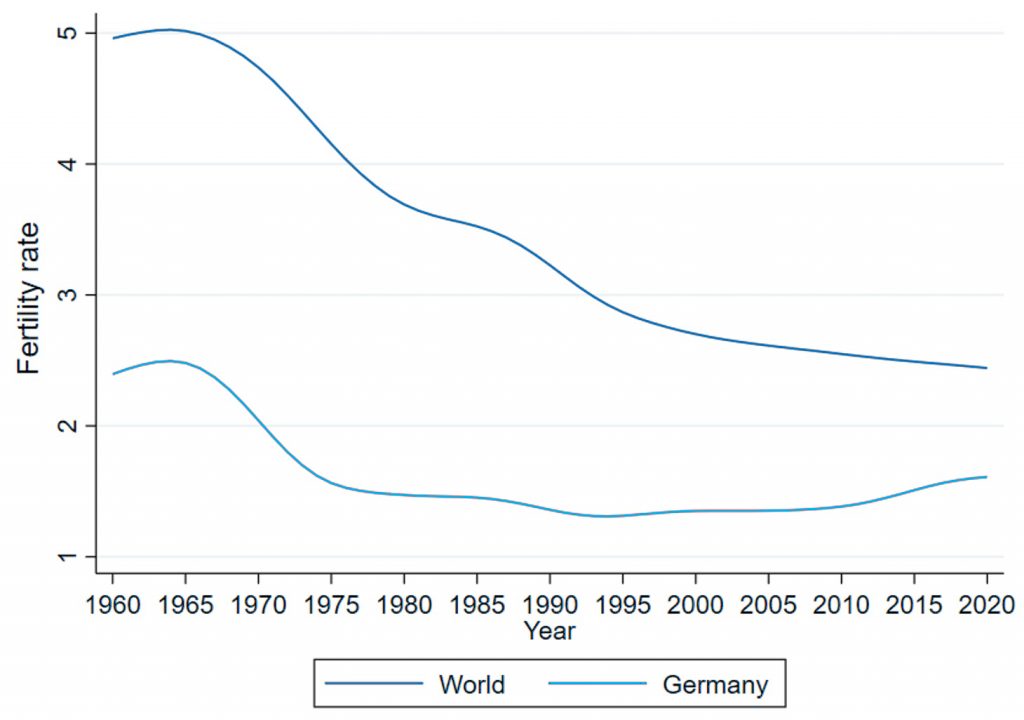 Previous studies have also shown how the liberalisation of trade with China and other emerging economies may have contributed to the rise in earnings inequality in the Western world (see Autor et al. 2016 for a review of the evidence), with impacts that extend beyond the labour market (e.g. Pierce and Schott 2020). In a follow-up to their study on the effects of trade on labour markets, Autor et al. (2019) document how the negative impacts of labour  market shocks induced by increasing import competition from China have affected the marriage-market value of men, and, in turn, marriage and fertility rates in the US because of their different effects on the economic opportunities of male and female workers. Recent work has shown how other labour demand shocks that differentially affect men and women can influence family formation and fertility behaviour (Anelli et al. 2021, Kearney and Wilson 2018). Structural economic transformations affected fertility behaviour also in the past. Ager and Hertz (2019) document how at the turn of the 20th century, the sustained shift from agriculture to manufacturing contributed to the fertility decline in the American South.

In recent work (Giuntella et al. 2022), we study how the labour market shocks driven by trade with Eastern Europe and China have affected fertility and marital behaviours in Germany, a country which was until recently in a ‘lowest-low’ fertility setting (Kohler et al. 2002, Billari and Kohler 2004, Haub 2012, Anderson and Kohler 2015).

Figure 2. Trade between Germany and Eastern Europe and China 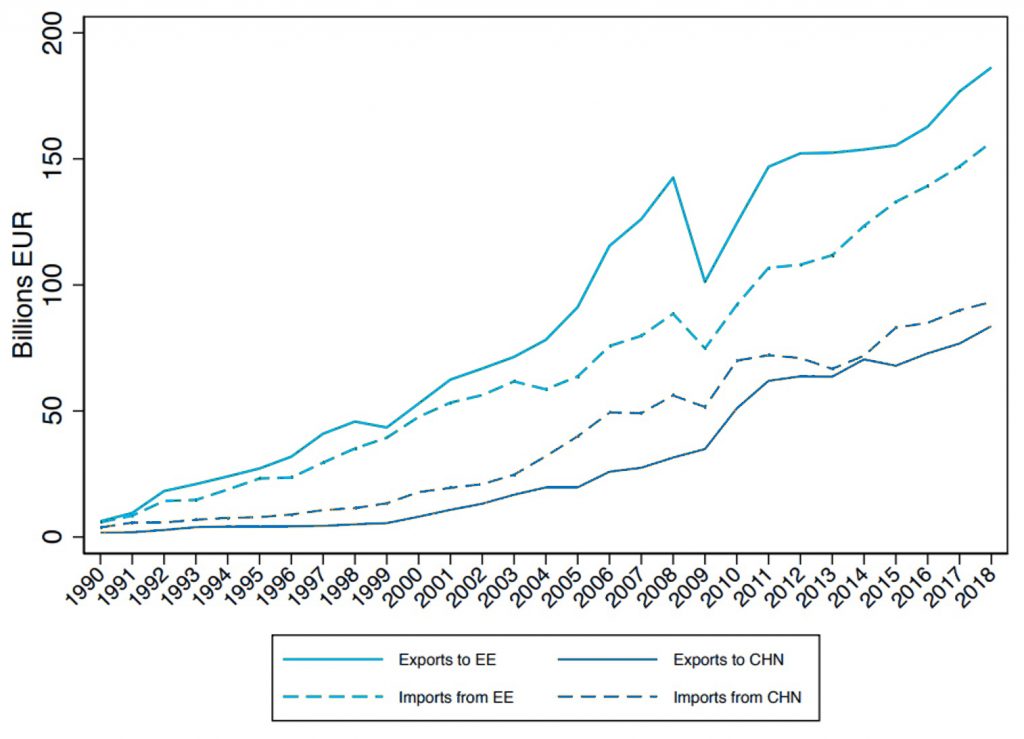 Notes: Trade values are in billions of current euros. The trade variables equal the sum of the direct and indirect (through input-output linkages) components.

Germany had one of the lowest total fertility rates in Europe, dipping as low as 1.2%, but then stabilising around 1.35% by the late 2000s (Haub 2012). Furthermore, trade flows with Eastern Europe and, to a lesser extent, China, have increased dramatically in the 2000s (see Figure 2), and previous research has shown that the effects on the labour market outcomes have been different from those observed in the US (Dauth et al. 2014, 2017). Finally, by focusing on Germany, we can exploit longitudinal data at the individual level from the German Socio-Economic Panel (SOEP), which allows us to investigate the labour market dynamics underlying the relationship between trade integration and family choices.

Building on the empirical strategies proposed by previous studies analysing the labour market impacts of trade (i.e. Autor et al. 2019, Dauth et al. 2014, 2017), we use trade flows with other high-income countries as instruments for the trade flows to Germany to identify causal effects on labour market outcomes, the probability of childbirth, and marital outcomes. Our empirical strategy estimates the effects of year-to-year changes in exposure to trade as determined by the initial industry of employment on fertility and marital outcomes. Because of its quantitative importance, we focus on the variation in trade between Germany and Eastern Europe.

Consistent with previous evidence for Germany (Dauth et al. 2014, Huber and Winkler 2019), we find that import and export shocks have significant effects on labour market outcomes and that they operate in opposite directions. Greater import competition lowers wages, hours worked, and the likelihood of employment, whereas greater export opportunities improve labour market outcomes. On the net, the positive effects of export exposure more than offset the negative ones of import competition. As expected, the labour market impacts are driven by the trade relationship between Germany and Eastern Europe (relative to that between Germany and China). The trade effects on labour market outcomes are concentrated among low-educated individuals and driven by full-time employees. This evidence is consistent with theoretical frameworks where different types of low-skill labour cannot easily move across industries and hence are affected by industry-specific import competition and rising export opportunities. In the analysis by gender, we find that the labour market effects are also concentrated on men, whereas the effects on women become smaller and less precisely estimated. These patterns are in line with the evidence for the US from Autor et al. (2019), highlighting negative gender-specific employment effects of import shocks.

Our findings point to the significant effects of trade exposure on fertility behaviour. Consistent with the evidence on labour market outcomes, the impact varies with exposure to import competition or export opportunities and with the education level of the individual. While we detect non-significant effects on marital behaviour (i.e. marriage, divorce, and cohabitation), the average change in imports from Eastern Europe through the period (1991–2018) reduced fertility by 1.6 percentage points. Following the direction of the labour market responses, the effects are concentrated among low-educated individuals and men (-1.8 percentage points). These negative fertility effects are partly offset by exposure to greater exports to Eastern Europe. Our estimates reveal that the average change in exposure to exports during our sample period led to a 1.1 percentage point increase in the likelihood of having a child, although the effect is precisely estimated only when focusing on low-educated individuals. The lack of significant effects on marital behaviour contrasts with Autor et al. (2019), who find negative effects of trade exposure on marriage rates, but is consistent with Kearney and Wilson (2018). These differences are likely to be explained by social norms prevalent in a context like Germany, characterised by relatively low marriage rates (Adler 1997).

Our paper speaks to a growing literature on the impact of labour demand shocks on life-course choices (Autor et al. 2019, Keller and Utar 2022, Black et al. 2013, Ananat et al. 2013, Currie  and Schwandt 2014, Kearney and Wilson 2018, Schaller 2016, Lindo 2010, Anelli et al. 2021). Our work is closely related to two studies on the labour market effects of exposure to trade using German data. Dauth et al. (2014) find that the unprecedented rise in trade between Germany and the ‘East’ (Eastern Europe and China) between 1988 and 2008 caused substantial job losses in import-competing industries, whereas regions specialised in export-oriented industries had even stronger employment gains. Huber and Winkler (2019) examine the role of risk-sharing between partners in mitigating the distributional effects of international trade. Their findings suggest that risk-sharing substantially reduced the inequality-increasing effect of trade. In a closely related paper, Keller and Utar (2022) use microdata on Danish firms and workers and find that worse labour market opportunities due to Chinese import competition led to higher parental leave taking, higher fertility, more marriages, and fewer divorces. This pro-family shift is driven by women in their late thirties, and the authors highlight the role of the biological clock in explaining the findings. Our results on the import effects are different from those obtained by Keller and Utar (2022) in Denmark, who find that greater import competition led to a ‘return’ to the family (e.g. higher fertility). Differences in the empirical strategy and the context studied (i.e. policies, parental leaves and subsidies for childcare between Germany and Denmark) may contribute to explaining the different results.

Overall, our findings inform the public debate on fertility rates in ‘lowest-low fertility’ settings such as Germany during the period under investigation (Kohler et al. 2002). Germany’s low natality rate has been a major source of concern for politicians for decades. The effects of a negative labour demand shock due, for instance, to import competition on fertility behaviour should not be neglected. Policies tackling the demographic deficit by extending parental leave or increasing child allowances may mitigate the adverse demographic consequences of labour demand shocks. Our analysis omits the possible influence of domestic policies on the impact of labour market shifts on family choices. Future research might thus investigate the role of family-oriented policies in mediating the effects of labour market shocks on demographic behaviour and life-course choices.

Adler, M A (1997), “Social change and declines in marriage and fertility in Eastern Germany”, Journal of Marriage and the Family 37-49.

Ager, P and B Herz (2019), “From the farm to the factory floor: How the structural transformation triggered the fertility transition”, VoxEU.org, 16 May.