Transport costs have decreased substantially thanks to technological advances in transportation, infrastructure development, and new communication technologies. From 1850 to 2020, maritime transport costs fell by 79 percent (Jacks and Stuermer 2021). Yet, international transport costs are far from being negligeable. Almost 20 years ago, Anderson and Van Wincoop (2004) pointed out that transport costs still represented around 30 percent of international trade costs (the rest being made of transaction costs, policy costs, and time costs). Disdier and Head (2008) also highlight that distance (a natural proxy for transport costs) is still a very important determinant of trade flows. More recently, the Covid-19 pandemic had a huge impact: transpacific freight rates at the end of 2021 are eight to nine times higher than the pre-pandemic norm (Waters 2021). Transport costs are with us and worth studying.

Having a clear view of the international transport cost burden is of key importance to several important economic issues, such as the gains from trade cost reduction. The usual way of modelling transport costs is to assume that they are ad-valorem, i.e. in proportion to the value of goods traded. Because they are multiplicative, such costs do not distort relative prices. Yet, this hypothesis contradicts day-to-day evidence of shipping price schedules that depend on volume and weight. Considering the existence of additive costs that are not in proportion to the value of goods traded and hence do distort relative prices challenges several received wisdoms in international trade. In this column, we argue that additive costs are quantitatively sizable and points out their effect in two dimensions: the role of composition effects in the decline of transport costs, and in international trade welfare computations.

While most of the international trade literature has modelled trade costs as an ad-valorem tax equivalent – i.e. as a constant percentage of the producer price per unit traded, part of Samuelson’s (1954) ‘iceberg cost’ hypothesis – recent papers point to the existence of an additive component, dependent on the physical quantities traded (Irrazabal et al. 2015, Martin 2012; but see the contrarian view of Lashkaripour 2020). How large is the additive component of international transport costs? Based on US imports data, we provide estimates of the size of both additive and ad-valorem transports costs by sector (at the three- and four-digit level, as well as HS10), country of origin, and transport mode (air and maritime transport) on a yearly basis over 1974-2019 (Daudin et al. 2022).

Figure 1 displays the estimated share of additive costs in transport costs over the period. The additive component appears of sizable importance throughout the period in both transport modes. It also varies substantially over time, with a different pattern across transport modes. After a period of common increase in air and vessel from the mid-1970s to the end of the 1980s, the share of the additive component has steadily decreased in air transport. In contrast, it has continued to increase until the 2000s for vessel. Put differently, the total transport costs decrease comes mostly from the reduction of additive costs in air transport, while it is mainly driven by ad-valorem cost reduction in vessel transport. These results hold through a variety of empirical settings, including instrumental variables and the use of more disaggregated data. 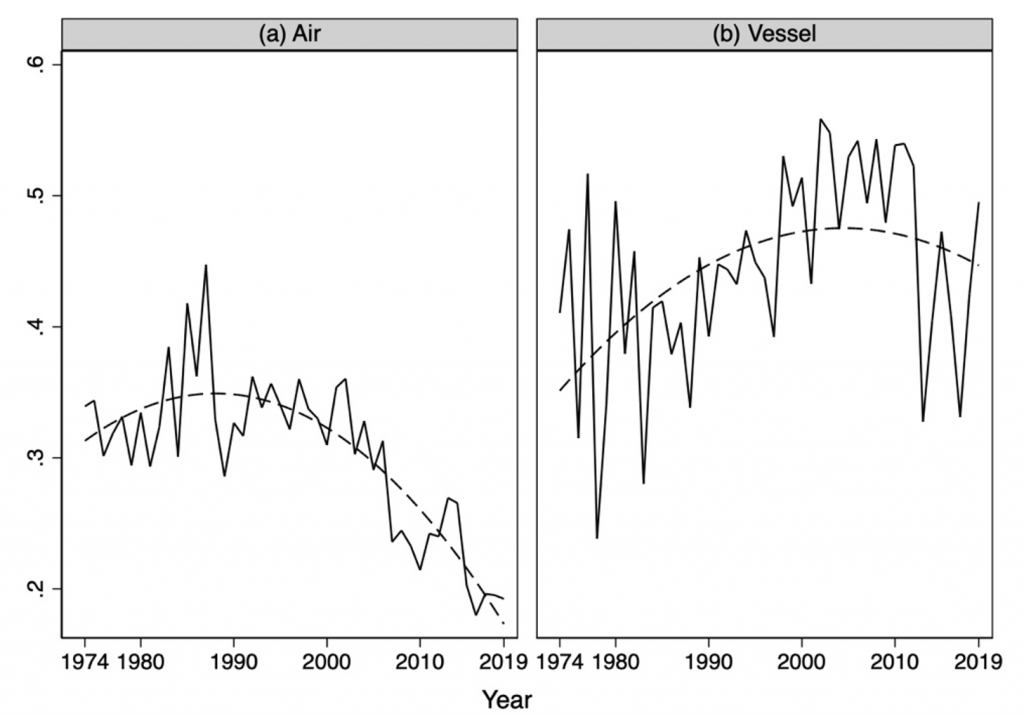 Note: The dashed line is the quadratic trend.

Going deeper into the decrease in international transport costs over time

Note: Transport costs are expressed in percentage of the value shipped, then built as indices with the reference value 100 in 1974.

As additive transport costs distort relative prices, they should entail a bigger burden on welfare than ad-valorem costs. To investigate that issue over 1974-2019, we introduce additive costs in the canonical Melitz (2003) model.

Table 1 summarises our main results. The reported reductions in transport costs are based on our empirical estimates between 1974 and 2019. In running this exercise, we also consider the fact that the share of exporting firms has substantially increased in the US over the period of interest (nowadays equal to 39 percent according to Lincoln and McCallum 2018). This can be accounted for in the model by an appropriate decrease in the fixed cost of exports. For both transport modes (air and vessel), we contrast two cases: when the transport cost reduction occurs solely through a decrease in ad-valorem costs, as usually modelled in New Trade theories (figures in columns A and C), versus when it is achieved through a combined reduction in the ad-valorem and the additive components, as quantified by our empirical exercise (figures in columns B and D).

What are the underlying mechanisms? In the canonical case with only ad-valorem costs, the welfare gains of a transport cost reduction can be viewed as the result of two opposite effects. As lower trade costs strengthen competition from foreign firms, entry becomes tougher on the domestic market. This reduces the number of varieties accessible to the consumers, hence welfare. Yet, as the firms serving the domestic market (either local or foreign) are also more productive due to the tougher selection, consumers benefit from lower prices. This price effect dominates, and the transport costs reduction generates welfare gains.

What changes when the reduction in international transport costs also occurs through a reduction in its additive component? The key factor is that the reduction in additive costs changes relative prices. The decrease in the additive cost indeed implies that the export-market price of the high-productive exporters declines relative to the low-productive ones (Sorensen 2014). In other words, the reduction in additive costs induces a within-exporters selection effect, in favour of the more productive firms. This amplifies the classic Melitz (2003) selection effect at the extensive margin. Both the (positive) price effect and the (negative) variety effects are stronger, but the former dominates, inducing even larger welfare gains than in the pure ad-valorem case.

Irarrazabal, A, A Moxnes and L D Opromolla (2015), “The tip of the iceberg: A quantitative framework for estimating trade costs”, The Review of Economics and Statistics 97(4): 777-792.

Jacks, D S and M Stuermer (2021), “Bulking up: Booms and busts in maritime transport costs and their drivers”, VoxEU.org, 18 April.