The impact of refugees on socioeconomic outcomes in destination countries, including crime, can be significant. This analytical note finds that the increase in the refugee population in Turkey led to an increase in the incidence of crime of between 2 and 4.75 percent per year, correspondsingto about 75,000-150,000 additional crimes per year. These results highlight the need to strengthen the social safety systems, take actions to counter the impact on the labour market, and provide support to the criminal justice system to mitigate the repercussions of massive refugee inflows.

The United Nations High Commissioner for Refugees (UNHCR) reports that, as of May 2022, there were more than 100 million forcibly displaced people worldwide. This large-scale movement has entailed serious political and economic concerns, especially for low- and middle-income destination countries, which have hosted around 80% of all refugees. The recent influx of millions of Ukrainians into various European countries in the wake of the Russian attack, and the UN’s assessment that climate change will lead to displacement of 20 million people annually (Burzynski et al. 2019), underline that refugee movements will likely remain a major policy issue for years to come.

Unlike voluntary migration, refugee inflows generally take place in large numbers and in short periods of time, generating significant bottlenecks in many sectors of host countries, and also in the provision of key government services. Thus, the impact of refugees on socioeconomic outcomes in destination countries, including crime, could be significant (Baker et al. 2015). This column synthesises the impact of refugees on crime by focusing on the case of Syrian refugees in Turkey.

Participation in criminal activity is determined by (1) expected returns from the labour market, (2) expected returns to illegal activity, and (3) deterrence variables such as the probability of apprehension and severity of punishment. Also important is the risk aversion and time discount of the decision maker.

The mechanism through which refugees can impact crime has two primary channels. First, the influx of refugees increases the supply of labour in the relevant labour market. For example, if the average human capital of refugees is lower than that of natives, and if jobs with higher skill content require the aptitude of speaking the language of residence (Foged et al. 2021), refugee labour is expected to increase unemployment and decrease wages in the market for low-skilled labour. This effect may raise the propensity for crime not only for refugees, but also for native unskilled workers who face diminished labour market opportunities (Borjas et al. 2010).

The implication of these two channels, summarised above, is that a sudden inflow of refugees is expected to have a non-negative impact on the crime rate of the host country unless the baseline proclivity for criminal activity is lower for refugees relative to natives, and at the same time, the inflow of refugees has no impact on the labour markets. It is unclear a priori whether and how the baseline crime rates would be different between natives and refugees. Importantly, no matter what the benchmark initial crime rate is for either group, an increase is expected in the crime rates of both natives and refugees to the extent that an increase in the number of refugees has detrimental effects in the labour market, especially for unskilled labour.

There is limited work on the impact of refugees on crime. Analysing the drop in the number of refugees admitted to the US following the Executive Order of President Trump, Masterson and Yasenov (2021) did not find a change in the crime rates of counties that reduced their refugee admissions. Of course, the annual number of refugees admitted to the US is minuscule in comparison to those received by other nations that received millions of refugees in short periods of time. Recent work has demonstrated that refugee inflows increased crime in Germany (Gehrsitz and Ungerer 2022, Dehos 2021), Switzerland (Couttenier et al. 2019), and Greece (Megalokonomou and Vasilakis 2020). In contrast to these findings, Kayaoglu (2022) and Kirdar et al. (2022) argue that the influx of Syrian refugees caused a reduction of crime in Turkey, although the estimates reported in both of these papers are plagued by empirical problems.

In a recent paper (Akbulut-Yuksel et al. 2022), we estimate the impact of Syrian refugees on crime in Turkey. We find that the refugee influx had a substantial positive impact on crime. To guide policy analysts who are unfamiliar with the theory and empirics of the economics of crime and law and economics, we also demonstrate how using improper measures of criminal activity and employing incorrect empirical models produce incorrect inference about the refugee-crime relationship (Appendix B, Akbulut-Yuksel et al. 2022). 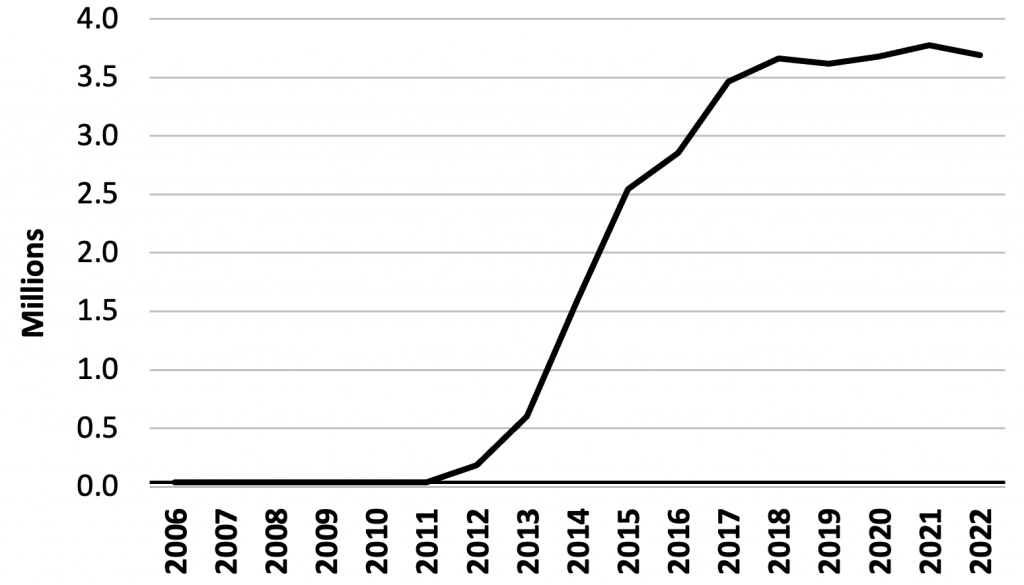 The Syrian refugee influx into Turkey started in early 2012 and accelerated over time (Figure 1). The number of refugees has reached 3.7 million by 2021 – around 4.5 percent of the country’s population. Until 2014, refugees were mostly located close to the Turkey-Syria border for two reasons. First, there were hopes of going back to Syria once the crisis was resolved. Second, the government built large refugee camps along the border regions to provide accommodation and humanitarian aid. After mid-2014, following the involvement of Russia in the Syrian civil war, it became clear that the conflict would not end soon. Consequently, the movement of refugees towards the western regions of Turkey has accelerated. Figure 2 displays these movement patterns, where darker areas indicate higher refugee-to-native ratios.

Figure 2. Time variation in regional distribution of refugees (2013 and 2016) 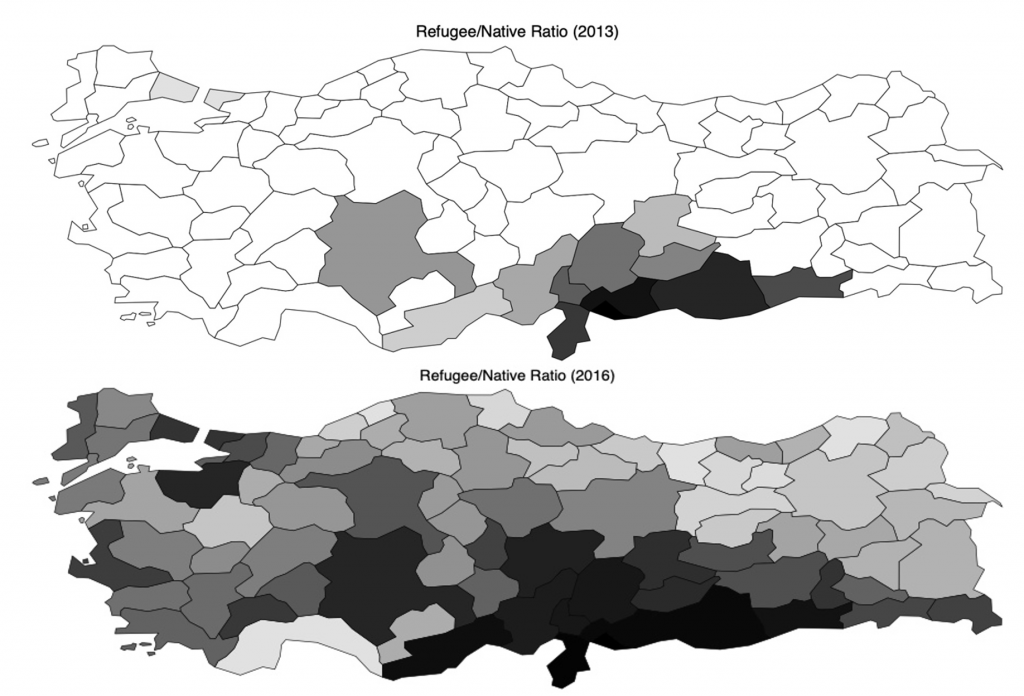 The standard measure of crime is the number of offenses reported to the police, although this information is not publicly available in Turkey. However, in most countries, the case files of offenses handled by the police are transferred to prosecutors’ offices, and these data are available from the Turkish Ministry of Justice at the province level. This accurate measure of criminal activity reveals that in Turkey there are about 3.3 million offenses per year, which indicates a crime rate of 4,500 offenses per 100,000 residents.1

The impact of Syrian refugees on crime in Turkey
We use data from each of the 81 provinces of the country between 2006 and 2016 to estimate the impact of refugees on crime. To address the potential statistical complications caused by refugees’ location preferences across provinces, we use a distance-based instrumental variables strategy (Tumen 2021, Del Carpio and Wagner 2015). The results show that the refugee influx led to an increase in the incidence of crime by 2% to 4.75% per year, which corresponds to about 75,000 to 150,000 additional crimes per year. The results are robust to a wide range of sensitivity analyses and placebo exercises.

This finding does not imply that the entire increase in crime is attributable to the increase in the refugee population. Part (or all) of the increase in crime may have been generated by the native population in response to the changes in labour market conditions. To investigate this point further, we estimate translog crime production functions, which consider three groups of natives, classified by education, and refugees as distinct factors impacting crime. These models confirm that the refugee population is a significant determinant of criminal activity. They also reveal that an increase in low-skilled native population has a separate, but smaller, effect on crime.

Because developing nations are bigger targets of refugee inflows from their low-income neighbours, and because they possess modest levels of human capital, a rise in criminal activity poses significant challenges for such host countries. Switching away from the legal labour market to crime lowers legal human capital, increases criminal human capital, and creates path-dependence in criminal activity (Mocan and Bali 2010, Mocan et al. 2005). Therefore, a rise in crime may generate development bottlenecks for low- and middle-income countries. An increase in crime also has implications for refugees, including increased animosity towards them which could impact their well-being directly (e.g. through discrimination in labour and housing markets), and indirectly through domestic politics. Thus, as pointed out previously (Arendt et al. 2022), our results highlight the need to strengthen the social safety systems, take actions to counter the impact on the labour market, and provide support to the criminal justice system to mitigate the repercussions of massive refugee inflows.

Megalokonomou, R and C Vasilakis (2020), “The effect of the exposure to refugees on crime activity: Evidence from the Greek islands”, SSRN Working Paper 3566564.

1 In comparison, the crime rates are between 1,500 and 2,200 in Bulgaria, Greece, and Spain, 3,500 in Portugal, 4,500 in Italy, 7,000 in England and Wales, and 7,500 in Germany. This variation between nations reflects differences in criminal activity as well as differences in crime reporting propensity of the public, and record-keeping practices of law enforcement authorities in each country.