Structural reforms have been at the centre of the economic policy debate in advanced economies, and in Europe in particular, in the past two decades. This column assesses the macroeconomic effects of three economic policy packages introduced in Italy between 2011 and 2017, obtained using both microeconomic estimates and model-based simulations. The three reforms induced a progressive, sizeable increase in total factor productivity and reduction in firms’ market power. By 2030, Italian GDP will be about 6 percent higher than it would have been absent the reforms (and any other shocks), with positive effects on the labour market.

Structural reforms encompass a broad set of policies that can permanently alter the supply side of the economy and create an environment in which innovation can thrive. These policies lift productive capacity by strengthening incentives to increase production inputs or to ensure that those inputs are used more efficiently, thereby raising productivity. Removing cumbersome and anti-competitive regulation, increasing enforcement of contracts and protection of property rights, or even designing incentives to boost investment in research and development (R&D) and innovation are all measures that can help reach such goals. By enhancing productive capacity, reforms also increase permanent income, which favours aggregate demand. While the long-run expansionary effects of reforms on both GDP and potential output are uncontroversial, the short-term effects on economic activity, employment and inflation are less obvious and require the use of a model to be fully evaluated.

The existing literature typically provides two distinct approaches to the assessment of the economic effects of structural reforms. The first is based on reduced-form evidence (e.g. Barone and Cingano 2011, Lanau and Topalova 2016, Chemin 2020), which pursues the identification of a causal impact of the reforms, but does not allow exploring the transition of the economy towards its new steady state. The second approach is based on structural dynamic general equilibrium models (e.g. Forni et al. 2012, Lusinyan and Muir 2013, Eggertsson et al. 2014, Varga et al. 2014, Cacciatore et al. 2016, Bilbiie et al. 2016), which allows for an accurate analysis of the short- and long-run dynamics of the effects of the reforms. However, the size of the simulated reforms is usually based on working assumptions (e.g. “what would happen if the gap vis-a-vis best practices was closed?”), without any underlying empirical estimate. The need to examine the path from micro behaviour to macro outcomes, to uncover impediments and design effective structural reforms, has been emphasised by Bartelsman et al. (2015).

In a recent paper (Ciapanna et al. 2020), we try to bridge these two strands of literature and propose an assessment of the macroeconomic effects of structural reforms based on a three-step procedure. First, we quantify the reform by means of a suitable indicator. Second, we estimate the reduced-form effects of the reform on markups (a measure of firm’s market power) and total factor productivity (TFP, a measure of efficiency in production). Third, we use such estimated effects as exogenous shocks in a structural model, to simulate each reform accounting for the transitional dynamics towards the new steady state.

Effects of the structural reforms

We consider three reform packages: liberalisations in the regulated service sectors, incentives to innovation, and civil justice reforms. The liberalisation measures were introduced with the Decree Law ‘Salva Italia’ (L. 22 December 2011, n. 214) and with the Decree Law ‘Cresci Italia’ (L.24 January 2012, n. 1), through various interventions that affected several sectors (e.g. energy, transports, retail trade and professional services), and aimed at removing entry barriers and other restrictions to competitive markets. Fiscal incentives for investment in innovation were included in the ‘Industry 4.0’ Plan, launched in 2016 and subsequently renewed, which, among the various initiatives, included a series of measures aimed at fostering investment (super-amortisation, so-called ‘new Sabatini’), and at boosting adoption of so-called ‘Industry 4.0’ technologies (hyper-amortisation) and R&D expenditure (tax credit on R&D). Finally, the civil justice reform package, started in 2011, was aimed at tackling the enormous backlog of cases and the excessive length of trials in the Italian justice system. The actions undertaken, of diverse nature and importance, were designed to reduce the number of legal disputes and to improve the productivity of the courts.

Microeconometric estimates, exploiting sectoral, geographical and firm-level sources of variation, indicate that structural reforms can boost TFP while lowering firms’ market power (Table 1). Service liberalization have induced positive effects both on service sector TFP (+3.5%) and on the degree of competition, with a reduction in the services sector markup of about 1.1 percentage points. Incentives to innovation lead to a productivity increase of around 1.4%. Finally, civil justice system reforms lead to an increase in TFP of 0.5%.

In order to assess the macroeconomic impact of the three reforms, we simulate a multi-country two-sector dynamic general equilibrium model calibrated to Italy. The model includes two sectors – manufacturing and services – which combine capital and labour with an exogenous TFP to produce output. Reforms aimed at increasing the degree of competition in a sector are modelled as affecting the corresponding markup.

We treat each of the three reforms as a separate exogenous shock. Following the proposed three-step procedure, the model is fed with information on (i) the estimated impact of the reform on the synthetic indicator considered (markup, TFP); and (ii) the implementation period of the reform itself (see Table 1, last two columns). Model-based simulations provide the final step of the assessment.

Figure 1 reports the effects of the reforms on the main macroeconomic variables, over a 20-year period. All reforms support GDP and have mild deflationary effects in the short run, reflecting the supply-side expansion induced by the increase in TFP and the reduction in market power in the service sector. The increase in the level of GDP observed in the first decade because of the sole effect of the considered reforms would be nearly 3%. A further increase of about 3 percentage points would be reached in the current, second decade. Taking into account the uncertainty surrounding our microeconometric estimates, the long-run increase in GDP (which would coincide with the one in potential output) would lie between 3.5% and 8%. Over the same horizon, total employment (here expressed in terms of hours worked) would increase by around 0.5%, while the unemployment rate would fall by about 0.4 percentage points.

Figure 1. Macroeconomic effects of the reforms 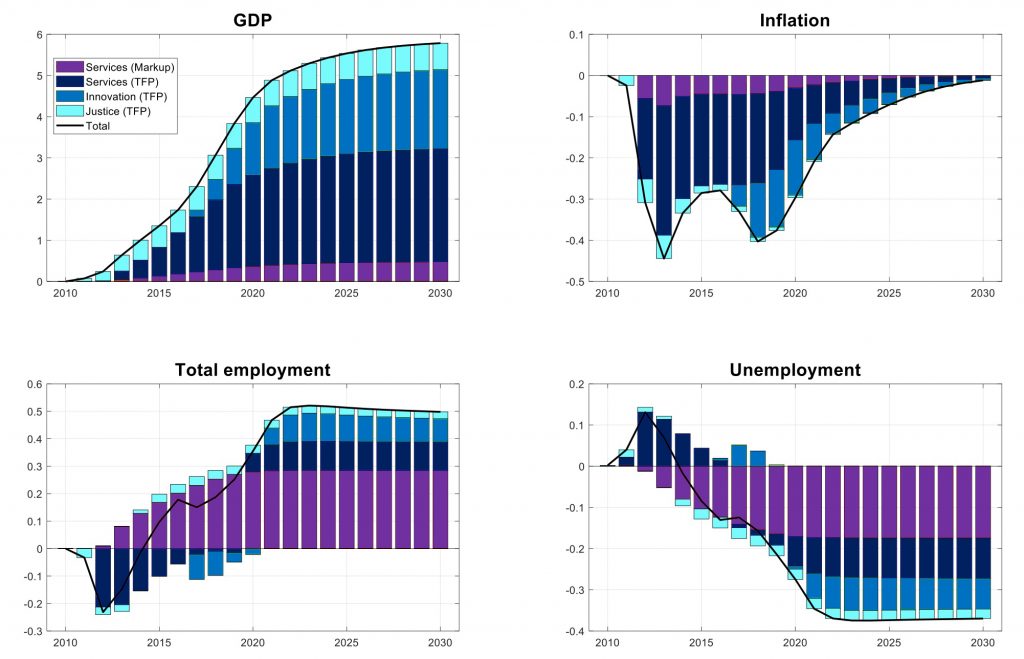 Structural reforms play a key role in increasing competition and productivity and therefore stimulating long-run economic growth, with non-negligible short-term effects. Our results are in line with those obtained in studies looking at similar reforms using different methodologies and approaches (e.g. OECD 2015, MEF 2016). Our analysis considers only a selected subset of the structural reforms implemented in Italy over the past decade, and it deliberately excludes all other factors (i.e. exogenous shocks) that contemporaneously hit the Italian economy in the same period. Indeed, policy timing and sequencing, fiscal consolidation and external constraints might affect the results of structural reform programmes (Manasse and Katsikas 2018). Our results also suggest that in the absence of the reforms, the dynamics of Italian TFP, GDP, and potential output would have been even weaker.

Authors’ Note: The views expressed in this column are those of the authors and should not be attributed to the Bank of Italy.

Bartelsman, E, F di Mauro and E Dorrucci (2015), “Eurozone Rebalancing: Are We on the Right Track for Growth? Insights from the CompNet Micro-based Data”, VoxEU.org, 17 March.

Chemin, M (2020), “Judicial Effciency and Firm Productivity: Evidence from a World Database of Judicial Reforms”, Review of Economics and Statistics 102: 49-64.

Forni, L, A Gerali and M Pisani (2012), “Competition in the services sector and macroeconomic performance in the European countries: The case of Italy”, VoxEU.org, 3 April.

OECD (2015), Structural Reforms in Italy: Impact on Growth and Employment.