Imagine Germany expands wind and solar many times over. Will it then no longer be necessary to import energy sources in the future?

The answer is a clear no”. Germany will remain an energy importer in the long term if it only relies on wind and solar.

Germany will only be able to cover one to two thirds of its domestic energy requirements through imports – according to the “Big 5” scenarios with 100 percent renewable energies.

In the short and medium term, wind and solar will even increase domestic import dependency. Natural gas power plants as a backup for the energy transition have made the republic dependent on Russia.

The more wind and solar the country builds, the more dependent it becomes on the workbench of China and on raw material suppliers for copper, aluminum, nickel, and much more.

No, wind and solar are not freedom energies – at least not without the help of reliable, clean energy sources such as hydropower and nuclear power.

After completion of the energy transition, Germany should live like in paradise. Green energy is said to be abundantly available to replace coal, oil and gas. At least that’s what some media reports say.

The study situation contradicts this: the potential for wind and solar energy in Germany is not nearly sufficient for the self-sufficiency of Europe’s largest economy due to the large amount of space required.

One can only achieve 100 percent renewables by 2045 if one imports one to two thirds of the energy requirement in the form of green hydrogen and green e-fuels (Fig. 1., Chart 1.). 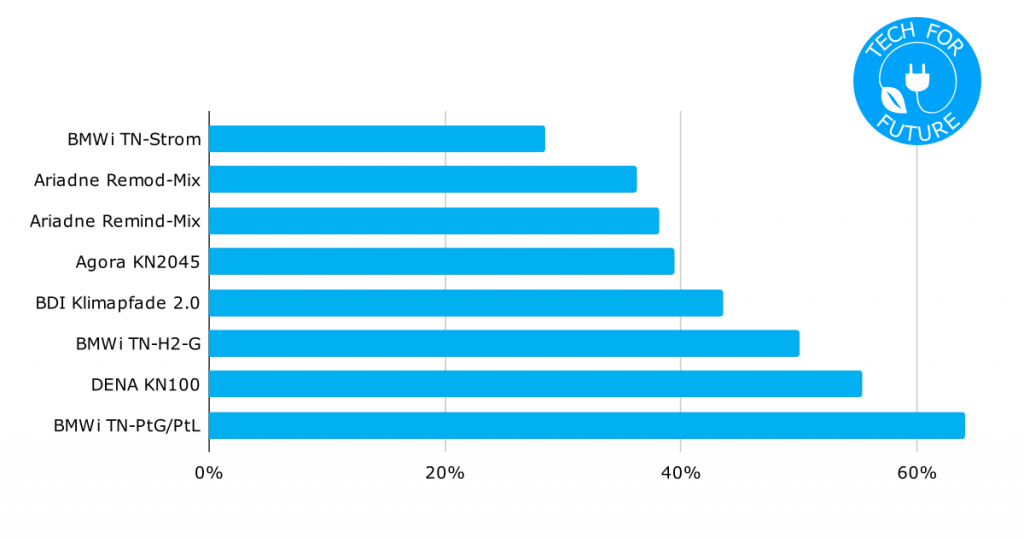 According to the IEA, green energy sources can be produced most cheaply in desert states such as North Africa and the Middle East.[7] Most of these countries are anything but “flawless democracies”.[8]

In many cases, the Federal Republic even remains dependent on the same oil sheikhs as it does today. They swap oil fields for solar fields and oil refineries for industrial-scale electrolysers.[9]

Germany should not only be in a good position in the future with the exporters of green hydrogen and green synthfuels. The country will also depend on hydrogen tankers and pipelines.

Even today, 40 percent of all cargo ships are used just to transport fossil fuels.[10]

The number of these ships will multiply with a hydrogen economy because hydrogen and e-fuels have a significantly lower energy density per volume (Fig. 2., Chart 2.).[11]

Fig. 2. Volumetric energy density of energy sources (in kWh per liter including transport containers on tankers) 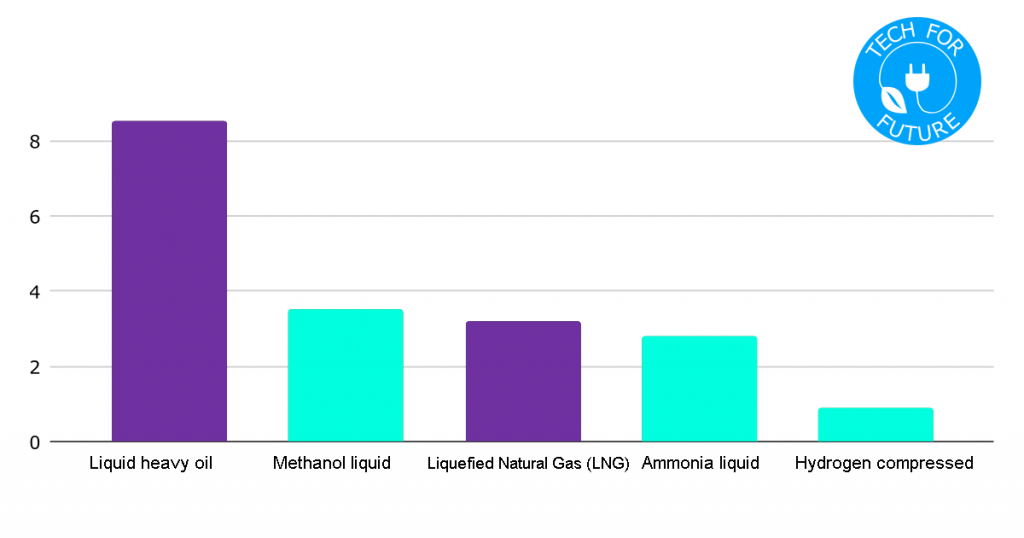 To transport energy with hydrogen, one needs around 10 times as many ships as with oil or coal. In the case of the e-fuels methanol and ammonia, the number of ships is double to triple.

Transport also increases the energy demand of the global hydrogen economy. In the future, hydrogen and synth fuel tankers will also run on ammonia or methanol. In doing so, they already consume part of the energy.

Dependence on photovoltaic production in Asia and China

Germany would not only remain dependent on energy sources. In addition, there is a new dependency in the production of photovoltaic modules and the main raw material – silicon (Fig. 3.). 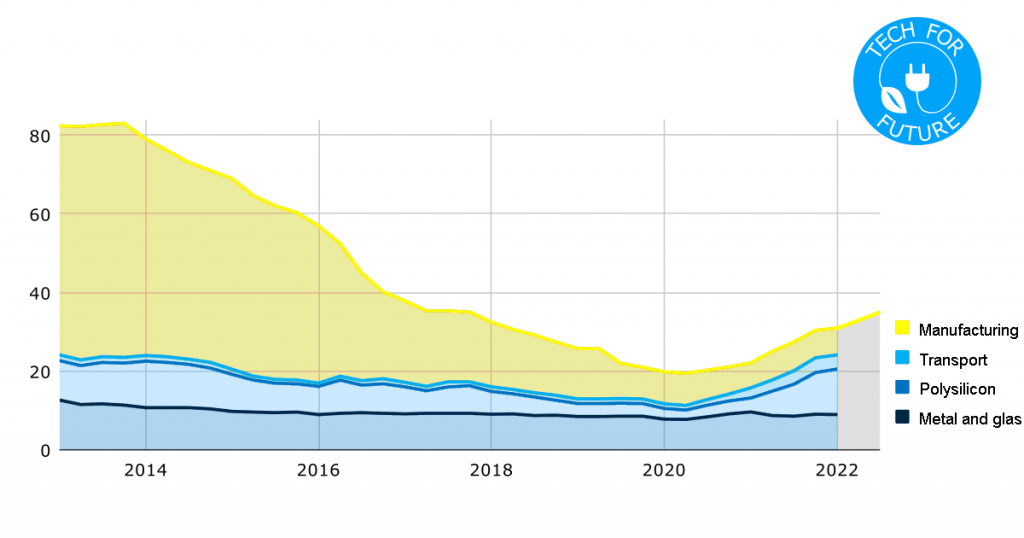 All photovoltaic systems produced worldwide come from the Asia-Pacific region including China:[12]

This concentration of dependency is still significantly higher than that of fossil energies today. And almost all of it even comes from just one country: China – also not a flawless democracy…

If China decides to invade Taiwan tomorrow, the expansion of photovoltaics in Germany will come to an end and it would not even be possible to replace old systems that are no longer available.

Dependence on raw materials in wind and solar power

Renewable energies are not only extremely space-hungry. They also devour significantly more raw materials than other energy sources.[13]

The effects of the dependency on the scarce silicon in photovoltaics can already be seen in the rising photovoltaic prices as a result of the Ukraine war.[14]

But other raw materials for solar systems such as copper, aluminum or nickel will also become scarce and expensive if there is a strong expansion.[15]

If the federal government wants to expand solar, as planned, the existing and planned copper mines up to 2030 will only be able to cover around three quarters of the demand. Newly developed copper mines take about 17 years to start production.[16]

In the case of wind power, the dependencies for both production and raw materials are lower, but still significant. Around 30 tons of copper are used in each wind turbine and even larger amounts of chromium, manganese and nickel (Fig. 4.).[17],[18]

Fig. 4. Metal demand from energy sources in Europe (2021, in kg per GWhel over the life cycle) 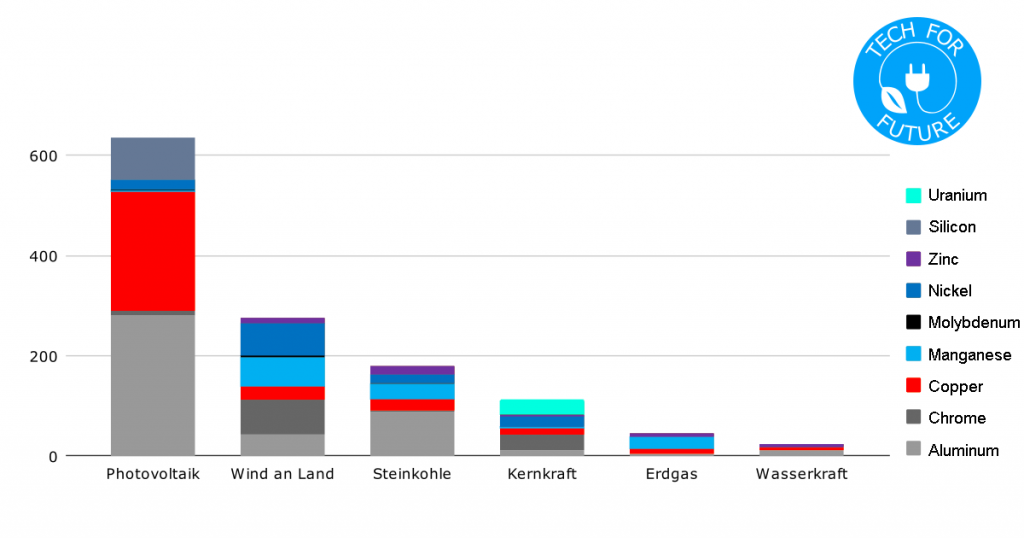 There are also raw materials for the grid expansion required by wind and solar, battery storage and electrolysers. This increases the already significant raw material requirements for sector coupling due to the heat transition and the rollout of electromobility.

Last but not least, renewables cement the use of fossil energies in the short and medium term, from which Germany urgently wants to get away.

But wind and solar power made the republic dependent on natural gas in the first place, as the current coalition agreement admits.[19] The “bridging technology” drove the country into Putin’s arms.

Wind and solar can reduce coal and gas burning. However, they cannot replace a single coal or gas-fired power plant because their generation depends on the weather.

This is reflected in their hardly any plannable performance (Fig. 5.):

Fig. 5. Secured capacity of energy sources in Germany (2018, performance credit based on availability) 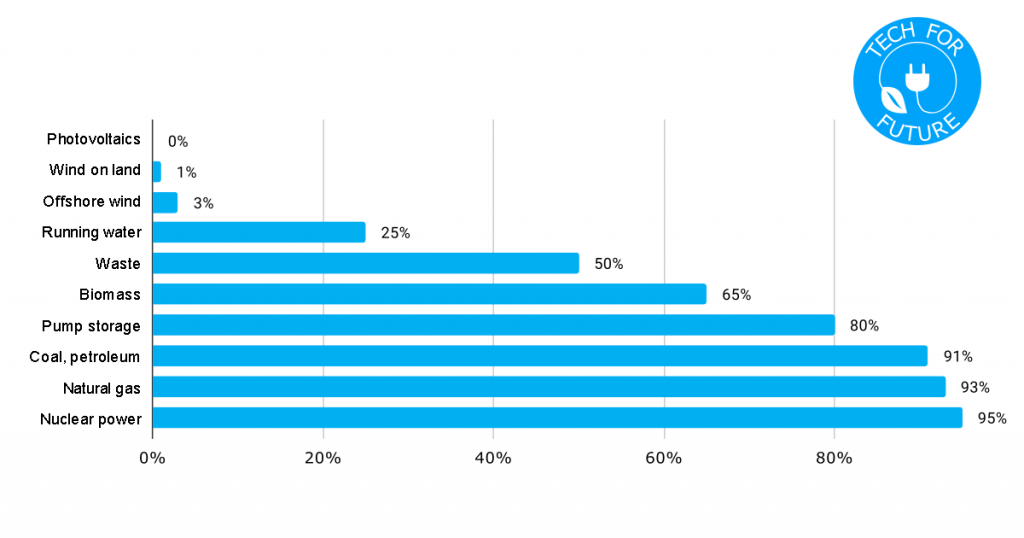 In dark doldrums, the power from wind and solar systems is too low to cover the load, even with enormous expansion. There are regular dark lulls lasting weeks or months.

With weather-dependent energies, the economy therefore needs a complete second infrastructure with backup power plants. For the next few decades, this backup will consist of fossil power plants.

Other disadvantages of a monoculture of wind and solar also limit freedom:

Wind and solar in monoculture are not freedom energies. The German energy transition envisages exactly such a monoculture.[20]

The term energies of freedom is great – despite all the criticism of its use. We need freedom energies. But no single technology by itself is a freedom technology.

The more pillars we rely on, the more independent Germany becomes of each one. For more freedom it needs all clean energies in synergy.[21]

With the additional potential of climate-friendly nuclear power, you can also generate the required energy completely in your own country. Germany will then become independent of imports from desert states.

A monoculture also forces technologies into roles they are not good at. Wind and especially solar are well suited for the peak load but struggle with the base load.

Nuclear power has the opposite problem. It handles the base load perfectly but struggles to cover the peak load. Even 100 percent nuclear power would objectively be worse than 50 percent.

So, it doesn’t help if “nuclear power fanboys” or “wind and solar junkies” play off their favorite technology against the others. The energy industry is not a zero-sum game.

A healthy mix of producers from nuclear power, wind and solar power is cheaper and quicker to build than a monoculture.[22] And last but not least, a mixed culture reduces dependence on autocracies.

All climate-friendly energies in synergy are freedom energies.

[1] Imports as electricity equivalents – how much electricity would have to be generated domestically for substitution.