The economic growth of Central Asia, its journey over the last 30 years, and the scale of its recent economic change are impressive. Following a major transformation, Central Asia became a large, important, and rapidly growing region. The world still needs to grasp that transformation.

In 2019, the region’s GDP reached USD 300 billion. In 2020, its total GDP amounted to USD 285 billion, a USD 42 billion increase relative to 2000. At the end of 2021, that indicator exceeded the pre-pandemic level. Over the last twenty years, the economies of the Central Asian countries grew at an average annual rate of 6.7 percent.

The region’s growing population provides a sizeable market, and generates an expanding pool of labour resources. In 2020, the total population of Central Asian countries exceeded 74 million people. Over the last 20 years, it increased at an average annual rate of 1.5 percent. According to UN estimates, the average annual population growth rate in the region is projected at 1.1 percent until 2040. The demographical situation in Central Asia in the next 20 years will remain auspicious, producing an age distribution pattern that alleviates rapid growth. Demographics definitely favour economic growth in Central Asia.

Kazakhstan has the largest economy in the region in terms of GDP. It is probably the biggest economic success story in the entire post-Soviet area over the entire 30-year period that has elapsed since the dissolution of the USSR. Kazakhstan accounts for 60   percent of the region’s GDP with only 25   percent of its total population. In 2021, its economy increases by 4   percent, and we project that in 2022–2026 it will accommodate an average growth rate of over 4 percent. January 2022 political turbulence negatively affects Kazakhstan’s 2022 performance but does not hinder its long-term prospects.

The main economic policy objective of Kazakhstan’s government is to switch from the current growth strategy based on exportation of oil and metals to a policy based on structural economic reforms – and thus ensure sustainable development, boost the country’s investment appeal, and improve its business environment. Kazakhstan is implementing several state programs designed to diversify the country’s economy and improve the well-being of its population. Transition to inflation targeting and free-float exchange rate regime gave the authorities additional tools to mitigate the adverse impact of external shocks, and enabled a well-balanced macroeconomic policy. Ample financial buffers help the government maintain a steady external position, and give it additional manoeuvrability during major disruptions. For example, the government responded to the negative impact of the COVID-19 pandemic by invoking a set of crisis management measures with an aggregate value of 8.3   percent of GDP. As a result, by the end of Q2 2021 Kazakhstan’s economy recovered to the pre-pandemic level.[1]

The economy of Uzbekistan has been opening up to the world since 2017. Uzbekistan produces 20   percent of the Central Asia GDP, and is home to 45 percent of its total population. The country is rich in natural resources. The structural transformation initiated by the government of Uzbekistan in 2017 significantly improved its investment climate, and created new opportunities for raising external funding to finance future economic growth. Capital started flowing into Uzbekistan. For example, over the last four years Russian investments alone doubled (EDB Monitoring of Mutual Investments data).[2] As the government of Uzbekistan recalibrated its foreign policy to allow more openness, the potential of the entire Central Asia as a whole also increased. That primarily applies to implementation of cross-border transport, logistics, and power industry projects in the region that will eventually open new corridors to rapidly evolving Asian markets. Fiscal and monetary policy transformation was designed to create a well-balanced macroeconomic policy foundation that is capable of flexibly responding to any challenges and upheavals. According to EDB estimates, as presented in the report Uzbekistan and the EAEU: Prospects and Potential Impact of Economic Integration, Uzbekistan’s potential GDP growth rate is about 5.5 percent p.a.[3] 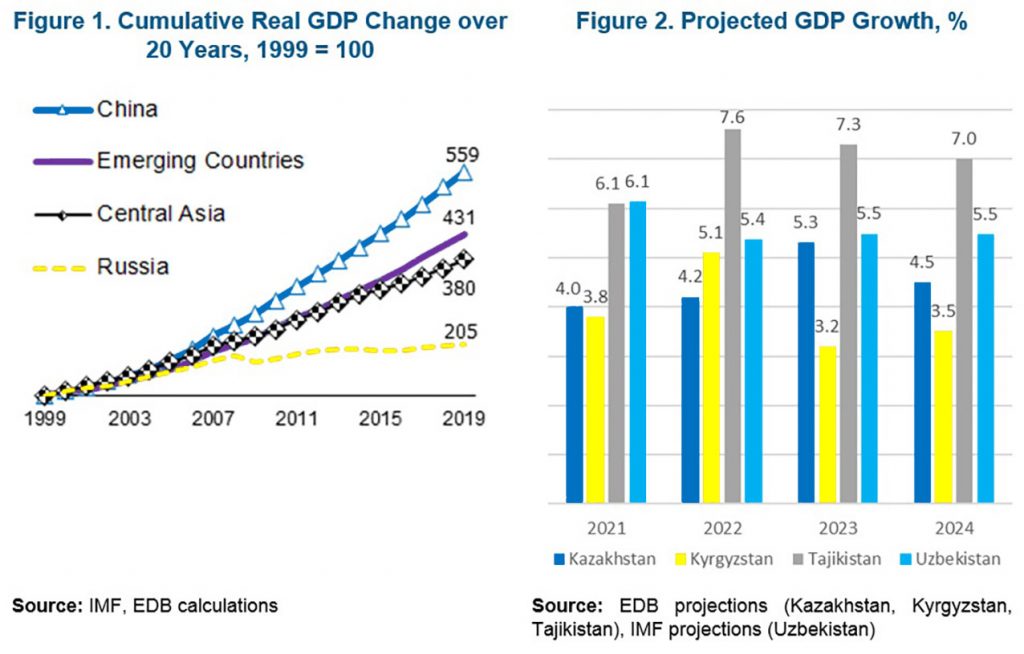 Certainly, the Central Asian region does have a lot of problems – it is hard to object. The average per capita income is USD 4 thousand, but that figure masks significant heterogeneity of economic development in individual countries. Access to markets (transport corridors, logistics) is still a systemic problem that hinders tapping promising economic niches. The operating regime of the water and energy complex remains suboptimal – even though it is the cornerstone of the region’s social and economic stability.[4] The demographical “window of opportunity” that I praised in the beginning of this column has a reverse side – social pressure, elevated education expenditures, and persistent need to export labour. There are risks of instability related to Afghanistan and also risks of internal turbulence as demonstrated by the 2021 Almaty Tragedy.

Still, Central Asia is evolving at a brisk pace, and has a considerable growth potential. The world still has to fully comprehend this economic reality, the scale of change, and the large potential of the region – both globally, by developed economies, and even by China and Russia, the region’s next-door neighbours. Nevertheless, the strategic importance of Central Asia for Russia and China is growing – among other things, in terms of maintaining general stability in Eurasia, realizing substantial trade and investment potential, and developing West–East and North–South transport corridors.

[1] EDB (2021). EDB Macroeconomic Forecast. The Return of Inflation: For How Long and Should We Fear It? URL: https://eabr.org/en/analytics/ceg-quarterly-reviews/edb-macroeconomic-forecast-the-return-of-inflation-for-how-long-and-should-we-fear-it-/