Bargaining power is unobserved and is an ‘umbrella’ term for various factors – ranging from personal preferences to the extent of unionisation and the sequencing of bargaining steps – that determine how the surplus of a work relationship is split between parties. In a canonical search and matching framework (Pissarides 2000), bargaining power is controlled by a parameter that seeks to capture all factors determined outside the model. In such a model, an increase in bargaining power allows workers to obtain higher wages, but vacancies drop as firms are less willing to hire owing to increased costs, leading to a gradual increase in unemployment.

Crucially, such an outcome for unemployment very much depends on the specifics of the assumed model. A different bargaining framework, a more complex modelling set-up, or different parameter values can completely alter the conclusions – and with them any policy recommendations. We therefore seek to rely as little as possible on theory in our identification of wage bargaining shocks, and instead exploit information available from recent historical events. We employ a structural vector autoregression (SVAR) model that relies on sign restrictions (also used in previous studies of wage bargaining shocks, e.g. Foroni et al. 2018, Conti and Nobili 2019, Galí and Gambetti 2019), but also on minimum wage policy shifts and labour strikes for identification.

At the beginning of 2013 German political parties declared a shared intention to introduce a binding minimum wage, and legislation in that sense came into force in August 2014. Compared with wage floors in other European countries, the initial minimum wage rate of 8.50 euros, adjusted for purchasing power, was the third largest. Moreover, around 10.7 percent of the workforce (four million employees) had wage rates below the new threshold and were eligible for the minimum wage rate.

We also treat major industrial disputes as wage bargaining shocks. We apply stringent criteria to select strikes suitable for our identification purposes. We focus on strikes where (1) a union is viewed as the winner of a negotiation round, and (2) anecdotal evidence suggests that wage increases would have been much less favourable to workers in the absence of a strike (threat). Moreover, we only consider cases where (3) the strike is an ‘economic strike’, meaning that it is focused on wage increases or better working conditions. We also choose (4) significant and costly strikes: in Germany, the legislative framework governing strikes encourages unions to call warning strikes that are typically short and induce only minor production losses for the firm; instead, we focus on full-day strikes. Finally, we only consider (5) major labour market conflicts involving IG Metall, the union for the metal and electricity industry. 1 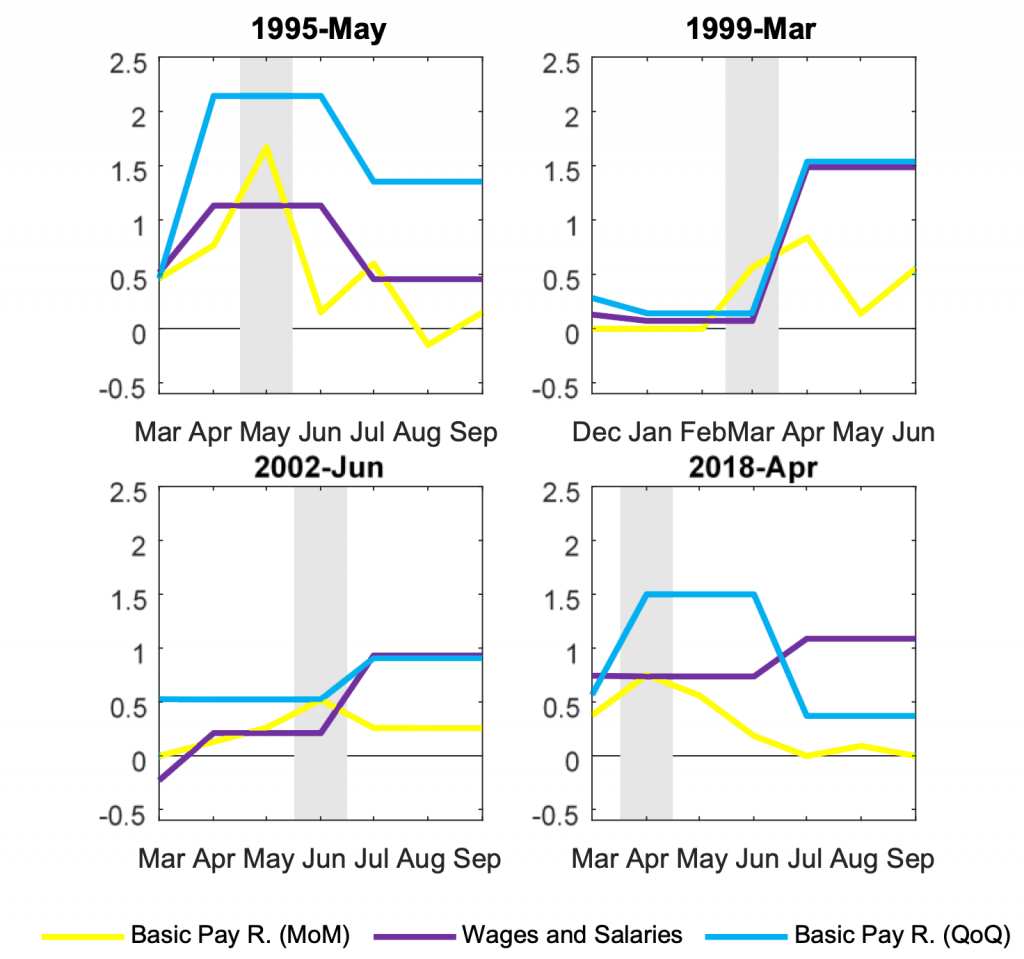 Notes: The grey area shows the month of the actual wage increase, agreed between IG Metall and the association of employers. Basic Pay Rates (BPR) is an indicator compiled on a monthly basis by the Deutsche Bundesbank that summarises developments in wages under collective agreements covering over half of the German workforce (Deutsche Bundesbank 2020); BPR (MoM) is its monthly growth rate and BPR (QoQ) is its quarterly growth rate. The Wages and Salaries series is the quarterly growth rate of wages and salaries per employee based on national accounts.

However, strikes are not completely independent events. In fact, calls for strikes and most negotiated wage increases typically reflect unions’ reactions to improving economic conditions. For example, historical sources emphasise that IG Metall reacted to past and expected developments in wages, workers’ low purchasing power, a better economic situation, and rising profitability (Gesamt Metall 2018). But strikes are not entirely predictable either. For one thing, while the incidence of strikes may coincide and correlate with favourable economic conditions, industrial action is still pretty rare. It is subject to legal barriers and usually viewed as a last resort in wage negotiations, owing to the potential unemployment and reputational costs for all social partners involved.

To establish exogeneity, we investigate the predictability of the full-day strikes using an event study of the stock market performance of firms whose employees are represented by IG Metall, following the approach of Neumann (1980), Becker and Olson (1986), and Kramer and Vasconcellos (1996), among others. 2 Strikes are harmful and costly for firms. Future profitability may suffer for a number of reasons, such as lost or delayed production owing to stoppages or the expectation of a higher wage bill owing to increased wage demands. Thus, strikes may reduce the valuation of a company, and if capital markets are efficient and strikes were not anticipated, the lower valuation should be reflected in the firm’s stock price. We find that, on average, stock returns fall by around 0.7-0.95 percent over the four days up to and including the strike, thus corroborating our identification assumptions.

Wage bargaining shocks and the macroeconomy

We estimate and identify an SVAR model that includes five macroeconomic variables: the GDP deflator, real wages and salaries per hour, the unemployment rate, hours worked per employee, and real GDP per capita. For estimation, we rely on standard Bayesian techniques (see Litterman 1986, Kadiyala and Karlsson 1997, Bańbura et al. 2010, among others), supplemented with a long-run prior (Giannone et al. 2019). The latter is particularly useful for German data, where reunification and a number of structural reforms in the early 2000s induced some trending behaviour for otherwise rather stable variables, notably unemployment and average hours worked.

The pattern of impulse responses indicates that German firms first react to increased labour costs by adjusting prices and reducing average hours worked. With time, firms then also adjust the size of their workforce and unemployment increases as a result, while those still in employment end up working longer hours. This is consistent with existing evidence about the relative importance of the adjustment in average worked hours in the euro area compared with the United States (see Ohanian and Raffo 2011, Bulligan et al. 2019).

Wage bargaining shocks are an important driver of the business cycle in Germany. A breakdown of forecast error variance shows that around 16 percent of the contemporaneous variation in real wages is explained by the shock, and it still explains approximately 6 percent at the ten-year horizon. The shock is an important driver of GDP deflator inflation, explaining almost a quarter of its variation. In the long run, the shock also accounts for a fifth of the variation in the unemployment rate. Focusing on an interesting historical episode, we also find that following the announcement and introduction of a minimum wage in 2014-15 (the same event also used for our narrative identification), wage bargaining shocks led to a persistent increase of around 0.25 percent in hourly real wages, or roughly 0.5 percent in nominal terms, lasting until early 2016). 4 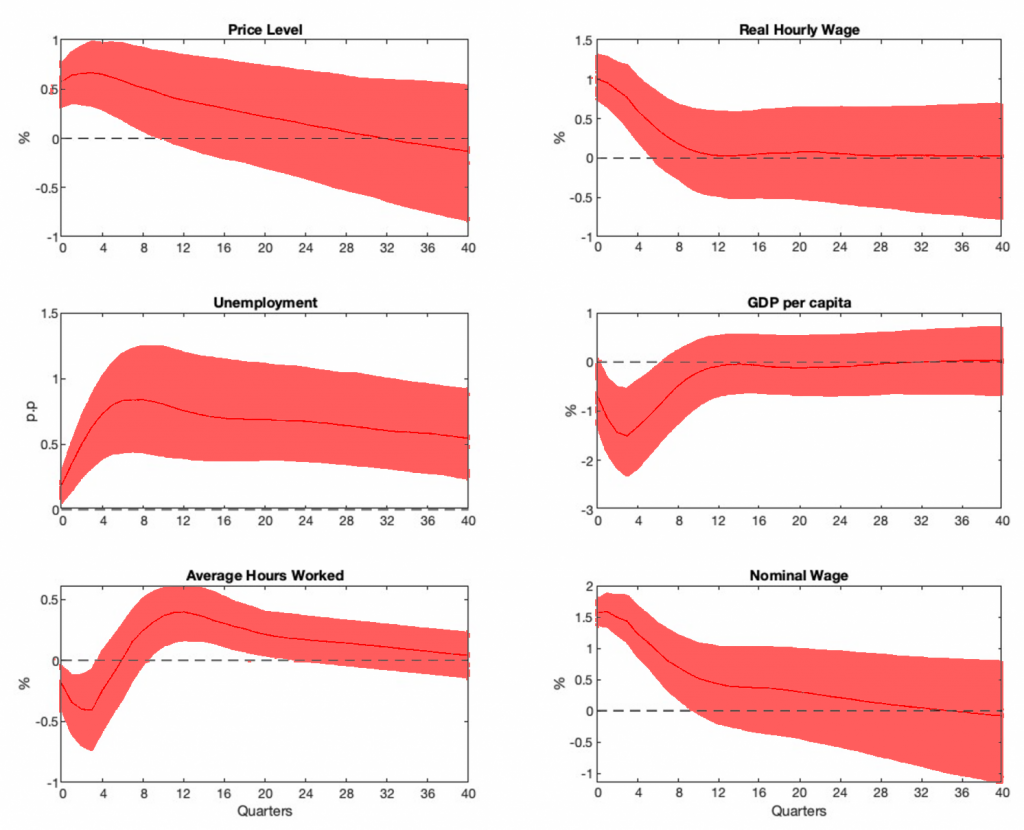 We revisit the identification of wage bargaining shocks in an SVAR model using narrative information for Germany. We propose to use historical events, namely the introduction of a minimum wage as well as a number of industrial disputes, which are both economically relevant for aggregate wage dynamics and plausibly exogenous due to exogenous variation in bargaining power. Our findings suggest that wage bargaining shocks are an important source of macroeconomic fluctuations, and our model’s quantification of the impact of the minimum wage introduction in Germany is in line with and complements existing micro-econometric evidence. Given the similarities between wage bargaining institutions in many economies (such as the existence of some form of national minimum wage, widespread union coverage and a relatively high degree of regulation of the wage-setting process (e.g. Du Caju et al. 2009), our methods and findings are of broader applicability and relevance.

Bulligan, G, E Guglielminetti and E Viviano (2019), “Adjustments along the intensive margin and wages: Evidence from the euro area and the US”, ECB conference, “Inflation in a changing environment”.

Conti, A M and A Nobili (2019), “Wages and prices in the euro area: exploring the nexus”, Occasional Papers No 518, Banca d’Italia, Economic Research and International Relations Area.

Kramer, J K and G M Vasconcellos (1996), “The Economic Effect of Strikes on the Shareholders of Nonstruck Competitors”, Industrial and Labor Relations Review 49: 213–222.