The history of globalisation is usually told in two parts, separated not only by two world wars but also by changes in technology, institutions, and economic logic. This analytical note reconsiders that narrative. Using detailed new evidence on Germany’s foreign trading practices from 1800 to 1913 (the ‘first’ globalisation), it finds that most growth took place along the extensive margin, while 25–30 percent of trade was intra-industry. If the first globalisation saw substantial heterogeneity within countries and industries, it may be time to re-think the ‘classical’ versus ‘new’ trade paradigm.

We are used to distinguishing between the ‘first’ and ‘second’ globalisation, separated not only by two world wars but also by changes in technology and institutions, and hence by their basic economic logic. The first globalisation is typically described in terms of ‘classical’ trade models of comparative advantage, where countries trade to take advantage of their differences. By contrast, the second globalisation is largely described in terms of ‘new’ trade models based on monopolistic competition and firm heterogeneity. Here, similar countries trade because they are all populated by firms exploiting economies of scale and differences in productivity.

The similarities and differences between these two globalisations are subject to a large and growing literature (Baldwin 2016, Jacks and Stürmer 2021). Given the rise in trade between very different countries, such as the US and China, Paul Krugman asked during his 2008 Nobel Lecture, “Is the world becoming more classical?” (Krugman 2008). In a recent paper (Hungerland and Wolf 2021), we describe Germany’s foreign trade from 1880 to 1913 with new and very detailed evidence. To us, this evidence begs the question: how ‘classical’ has the world ever been? Put differently, to what extent can ‘new’ trade theory help us to understand the first globalisation?

We have three main findings. First, and least surprising, Germany during this period became increasingly specialised in manufacturing – notably chemicals, machinery, and transport equipment. This is fully in line with predictions of classical trade models, and Germany’s comparative advantage in industries that use physical and human capital intensively. Second, however, we find that nearly all growth in exports and most growth in imports took place along the extensive margin, driven mostly by new products traded with old trade partners. Third, we find that between 25 and 30 percentof trade at our finest level of disaggregation is intra-industry trade, i.e. trade in the same product category. The latter two findings imply that we cannot understand the first globalisation unless we allow for very substantial heterogeneity within countries and industries.

To create our data, we first digitalised all historical statistics on the foreign trade of the German customs union and the two major port cities, Bremen and Hamburg, that stayed outside of the customs union before 1889. Our data covers imports and exports from 1880 to 1913 of all products, with all trade partners, captured in values and quantities. Next, we reclassified all data to the SITC system, and used a quota method to merge the Bremen and Hamburg data with that of the German customs union to create one consistent dataset. Using the SITC, we can compare this to historical trade data for other countries (e.g. Italy, see Federico and Wolf 2012) and modern trade data. In a related paper, Hungerland and Altmeppen (2021) provide further details and discuss which revision of SITC is best suited to create comparable, historical, and long-run trade data.

Figure 1 shows the growth of imports and exports of the German Empire, 1880–1913. This trade grew much faster than GDP, resulting in a rising openness ratio. Moreover, Germany was catching up to the UK, becoming the second largest trading nation in the world by 1913. 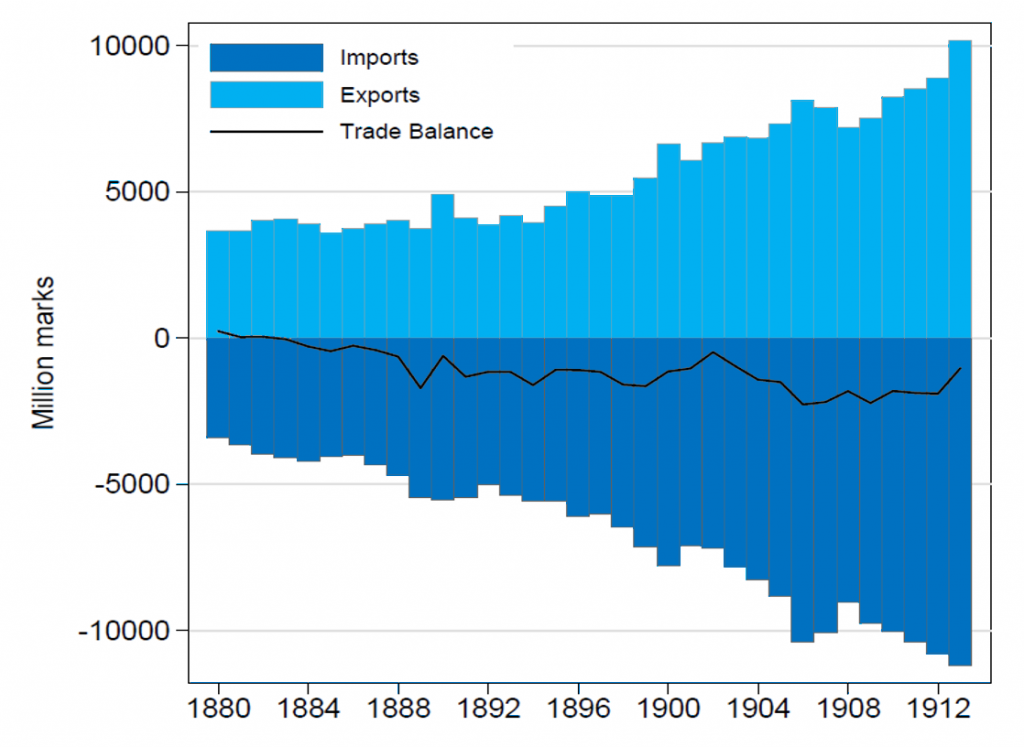 Table 1 is a first cut through the aggregate data: we see how imports and exports grew between 1880 and 1913 at the level of 1-digit SITC sectors. The pattern is roughly in line with classical trade models, where exports of manufacturing products grow more rapidly than imports, while the opposite holds for agricultural products and raw materials. However, the growth of manufacturing exports is accompanied by very strong growth in manufacturing imports, and Germany continues to export agricultural products and especially raw materials (such as coal).

Our data allows us to dissect aggregate trade growth much further, down to the level of 5-digit SITC (the product-level) for each of Germany’s trade partners. The number of products traded increased from 334 in 1880 to 834 in 1913, while the number of trade partners grew from 34 in 1880 to 86 in 1913. Let us define each product-country combination as a variety. In 1880, we observe 971 import varieties and 1,482 export varieties. A generation later, in 1913, we observe 10,145 import and 29,263 export varieties. Following Amiti and Freund (2010), we can decompose aggregate trade growth over all varieties into three margins. First, growth can occur along the intensive margin, where trade in existing varieties is expanding (‘more of the same’). Second, there can be growth along the extensive margin, where new varieties enter (either old products are traded with new trade partners, new products traded with old trade partners, or new products with new trade partners). Finally, growth can occur along the extensive margin, where old varieties disappear. Figure 2 shows the relative contribution of each of these margins to Germany’s trade expansion before WWI. 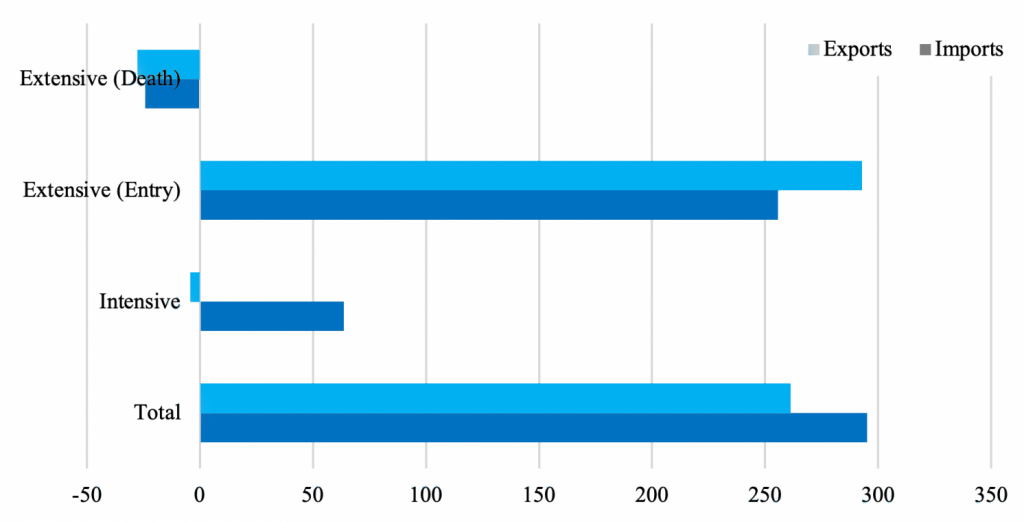 Note: Margins in percent of total trade according to eq. 1. Source: own calculations.

A related question is whether and to what extent there was intra-industry trade, hence exports and imports of the same products in a given year. In Figure 3, we separate non-manufacturing from manufacturing trade to show what share of trade is intra-industry, varying the level of aggregation from sectors (1-digit SITC) to products (5-digit SITC).

Note: Intra-industry trade in percent of total trade, Figure 3A: SITC sectors 0 to 4. Figure 3B: SITC sectors 5 to 8. Source: Own calculations.

Overall, our evidence suggests that simple classical trade models that focus on differences between countries miss crucial aspects of the first globalisation. Once disaggregated trade data becomes available, we see that most of the growth in imports and exports was due not to an increase in the value of trade in specific products between trade partners, but to growth in the number of products and trade partners. Our new evidence for Germany is in line with similar findings for Belgium before 1914 (Huberman et al. 2017) and Japan before 1914 (Meissner and Tang 2017, 2018). Such growth along the extensive margin may have been driven by changes in trade costs due to improved transportation technology, by rising incomes, or may reflect strategies to differentiate products by branding and quality. But together with the evidence on large-scale intra-industry trade, this suggests that heterogeneity within countries and industries should be systematically taken into account.

Still, classical trade models are obviously not dead. At a very broad level, they seem to capture how countries specialised before 1914 – after all, they were invented to capture exactly this. Germany did specialise in manufacturing products, while agriculture in Germany and elsewhere in Europe was increasingly exposed to import competition: the ‘European grain invasion’ (O’Rourke 1997) was very real. Farmers responded either by giving up and leaving agriculture, lobbying for protection, or shifting to different products (Suesse and Wolf 2020). To us this suggests thinking about globalisation along the lines of a hybrid model such as Bernard et al. (2007) that combines comparative advantages at the country-level with heterogeneity at the firm-level. Doing so might have far-reaching implications for our interpretation of the costs and benefits, the winners and losers, and hence for the political economy of globalisation. With more disaggregated trade data available for more countries – hopefully in standardised and comparable form – this is opening the door for a new understanding of the history of globalisation. With Oscar Wilde: “The one duty we owe to history is to rewrite it.”

Federico, G and N Wolf (2012), “A Long-run Perspective on Comparative Advantage”, The Oxford Handbook of the Italian Economy since Unification, Oxford University Press: 327–350.

Huberman, M, C Meissner and K Oosterlinck (2017), “Technology and Geography in the Second Industrial Revolution: New Evidence from the Margins of Trade”, The Journal of Economic History 77(1): 39–88.

Hungerland, W-F and C Altmeppen (2021), “What is a product anyway? Applying the Standard International Trade Classification (SITC) to historical data”, Historical Methods: A Journal of Quantitative and Interdisciplinary History.

Jacks, D and M Stuermer (2021), “Bulking up: Booms and busts in maritime transport costs and their drivers”, VoxEU.org, 18 April.

Meissner, C and J Tang (2017), “New goods and markets versus more of the same: Japan’s entry to world markets during the first age of globalisation”, VoxEU.org, 16 June.