Numerous analysts have suggested that globalisation has permanently slowed or reversed, while others argue that it has merely changed in nature. This analytical note argues that globalisation is a complex phenomenon that needs to be assessed with detailed, firm-level indicators that go beyond simple aggregate metrics. When using such indicators, the picture is much more nuanced. In the case of Europe, the role of global trade is as important as ever for hundreds of thousands of companies and millions of jobs supported by global trade flows.

Globalisation is a complicated phenomenon that is often oversimplified. The common conception is that the world has entered a period of reduced trade activity as countries have closed themselves off to trading with other markets. One of the key indicators referred to as evidence of ‘de-globalisation’ – or ‘slowbalisation’ – is the declining share of trade in global GDP.

However, Baldwin (2022) concludes that the reports about the death of globalisation are greatly exaggerated. He argues convincingly that globalisation is a complex trade phenomenon that cannot be captured with one simple macroeconomic indicator. For instance, it is enough to plot the evolution of this simple metric of globalisation for each of the top trading partners (e.g. the EU, US, China, Japan) and the de-globalisation story becomes more nuanced. The evolution of trade over GDP looks rather different for the EU compared to the other major trading nations, indicating that perhaps globalisation has not really peaked for Europe.

Three important conclusions come out of these analyses. First, as Baldwin (2022) clearly shows, the EU trade-over-GDP metric of globalisation has not really peaked. Second, to have a correct understanding of recent developments, one needs to use more disaggregated trade metrics than simple trade-over-GDP ratios. Third, globalisation is a multi-dimensional process and has to be measured across a wider range of economic indicators.

A better way to measure globalisation: ‘Trade policy 2.0’ firm-level indicators
In a new paper (Cernat 2022), I argue that a more precise way to measure the extent to which globalisation is shaping trade and economic relations is to rely on more disaggregated indicators, ideally firm-level trade indicators. As nowadays generally accepted in economics, nations do not trade; firms do. 1 Having a good grasp of trade policy realities would consequently also require such good firm-level trade indicators, leading to a ‘Trade Policy 2.0’ approach (Cernat 2014).

One detailed indicator that can capture the extent to which the EU has become more integrated into the global economy is the number of firms in Europe that engage in trade, notably the number of EU firms that rely on global supply chains and imported intermediates for their economic activities. As can be seen in Figure 1, the number of EU importing firms is growing, surpassing the symbolic milestone of a million firms in 2019 and reaching a new record of more than 1.2 million firms in 2020.

Figure 1. The number of EU importing firms kept growing, even during the COVID-19 pandemic

Source: Author’s elaboration based on Eurostat (2022a).

This finding is remarkable, considering the unprecedented shocks that global supply chains suffered in recent years and the massive decline in trade witnessed globally as a result of the COVID-19 pandemic and other trade shocks. This growth in the number of EU firms engaged in trade is in line with other in-depth firm-level analyses confirming that a large share of global trade decline took place via a decrease in trade values or product varieties and not so much via a reduction in the number of firms engaged in international trade (see Bricongne et al. 2022 for a firm-level analysis of French exporters and Behrens et al. 2013 for an in-depth analysis based on Belgian firm-level trade data).

Another way to measure globalisation is to look at the extent to which ‘Global Europe’ requires well-functioning, diversified supply chains. Two detailed indicators can shed light on this aspect. The first one captures the importance of imports for EU exporters. As seen in Figure 2, for the vast majority of EU member states, more than 70% of exporters are also importers. A second detailed indicator to gauge the complexity and the diversity of global sourcing patterns for EU trade is to look at the number of suppliers for each imported product in the EU, at very disaggregated product levels (Figure 3).

Figure 2. The importance of imports for EU exporters, 2020 (% of two-way traders in total number of EU exporters) 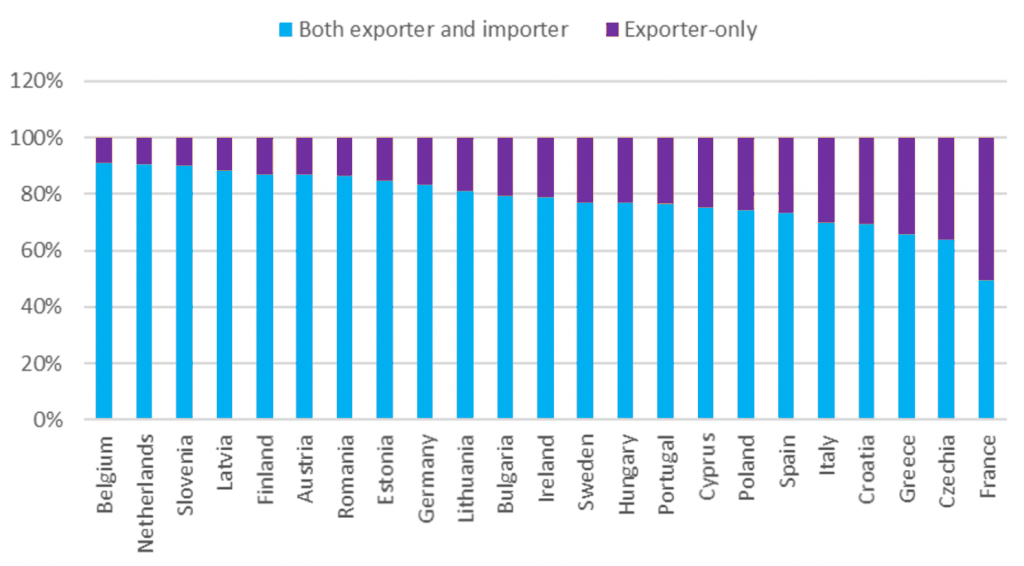 Source: Author’s elaboration based on Eurostat (2022a).

Figure 3. EU supply chains: How many suppliers for each imported product? 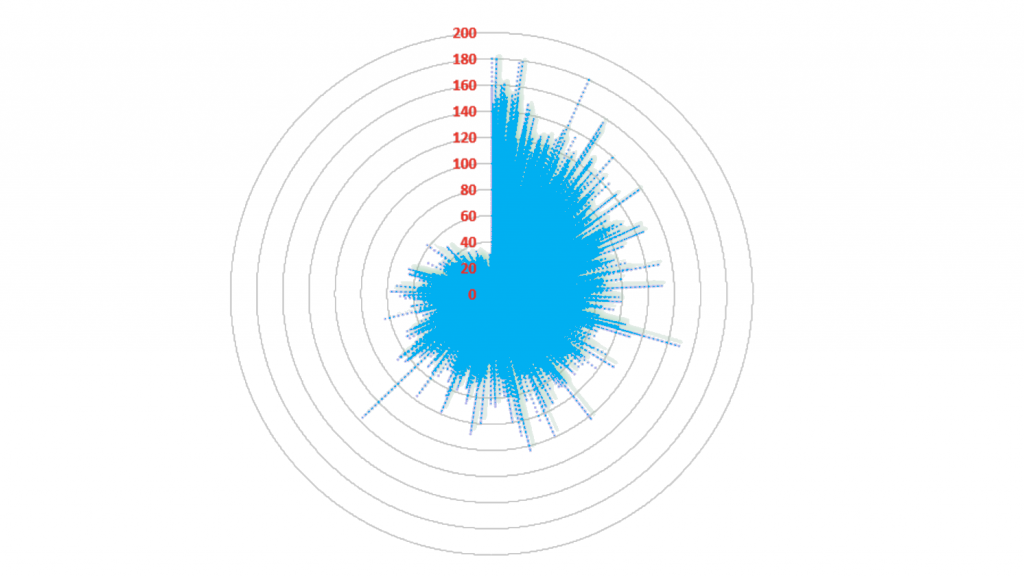 Zooming in on one of the most disaggregated product levels of EU imports (8-digit product codes) shows us the staggering complexity and diversity of EU supply chains. Many of the over 9,000 individual products imported to the EU come from over 100 non-EU countries. The average number of foreign suppliers for EU imports across the full range of imported products is 68 countries. For the vast majority of products, the diversity of EU import sources at the firm level is even greater, since each country usually has more than one individual exporting firm for each of these products.

When trade means jobs: Has globalisation peaked for Europe?

Global trade flows are not just important for the 1.2 million EU importing firms; they are also a major source of economic activity for EU exporters. Participation in global supply chains has a positive and growing effect on jobs and wages in Europe. In 2000, extra-EU exports supported almost 22 million EU jobs (12% of total EU employment). By 2019, EU jobs supported by trade reached 38 million: 1 out of 5 jobs in Europe are supported by trade (Kutlina-Dimitrova and Rueda-Cantuche 2021). Many of the trade-supported jobs in Europe are found in small and medium enterprises (SMEs) that are successfully engaged in global value chains: over 13 million jobs in Europe depend on SME exports (Cernat et al. 2020).

Services also have growing importance not only in global trade but also in the number of jobs supported by trade flows. When accounting for both direct services exports under the General Agreement on Trade in Services (GATS) and the ‘embedded services’ exported as part of goods (mode 5 services), services jobs represent nowadays more than half of total trade-supported jobs in Europe (Kutlina-Dimitrova and Rueda-Cantuche 2021). So, globalisation has not really peaked in terms of EU employment either.

The future of globalisation: Some open-ended questions

Some forces will work against globalisation; others will keep pushing towards more global economic integration. Take for instance the consumers’ love of variety. If globalisation satisfies this human need for greater (including imported) varieties, trade in consumer goods will not fade away. One good indication perhaps is the rapid increase in global e-commerce. In 2010, only around 4% of EU consumers engaged in online purchases from non-EU sellers. In 2021, 12% of EU consumers did so, buying a wide range of products online from non-EU sellers (Eurostat 2022b).

New technologies may lead to reshoring and automation that reduce trade flows (Seric and Winkler 2020), but they may also increase trade flows in unexpected ways (Mulabdic and Ruta 2019). New technologies such as artificial intelligence, 3D printing, the Internet of Things, and robotics will offer new trading opportunities for manufacturing-process and digital (mode 5) services built into ‘smart’ products. Digital technologies will continue to eat into the share of manufactured goods (from cars to fridges and pacemakers), and companies engaged in such activities will remain global players.

Apple, for instance, uses more than 170 direct suppliers (located in 30 different countries worldwide) for the parts and components used in their products. Now consider the number of services suppliers that are part of the Apple iOS App Store. In 2017, there were almost 500,000 active mobile app developers registered with Apple and over 700,000 app developers registered on Google Play (Ceci 2022). Like hardware suppliers, software and app developers are also scattered around the world, such as in Brazil, China, India, Japan, Romania, Ukraine, and the US. Our lifestyles will continue to rely on digital trade flows and software applications have virtually no physical limitations, except perhaps the memory of our smartphones.

All in all, there are many reasons to remain cautiously optimistic. While the future remains hard to predict, especially for major societal trends, it is fair to assume that humanity will keep some of its fundamental traits. If the future is hard to predict, our past is not. Archaeological evidence indicates that from the early days of humanity, trade played a critical role in ensuring the wellbeing of societies. As The Economist put it, “free trade and division of labour might be responsible for the very existence of humanity” (The Economist 2005). One may therefore say that Homo sapiens was born Homo mercatus. This helps put things into the longer-term perspective: whether we trade more or less in the short term, or any given year, becomes less relevant. What really matters for the longer-term prospects of globalisation is that trade is part of our DNA.

Eurostat (2022a), “Trade in goods by enterprise characteristics”.

For a good overview of the importance of a firm-level approach to international trade see for instance Bernard et al. (2007).

Author’s note: The views expressed herein are those of the author and do not represent an official position of the European Commission.