In the era of colonialization, several, mainly European, powers tried to conquer areas very far away from their mainland, thereby creating multicontinental empires. One of these European powers was the German Empire which entered the game for colonies in the 1880s and was forced to leave it after World War I. Still, these involvements had a significant impact on several aspects of the German Empire. This essay discusses the question if the colonial policy of the German Empire until 1914 was an economic success. The reason for this approach is twofold. Firstly, economics can be seen as one of the main motivations of colonial policy (Blackbourn, 2003). Hence, looking at the economic results of this undertaking as a measure of success seems reasonable. Secondly, economic development can be measured relatively accurately and is a good proxy for defining success of the German colonial policy. Therefore, economic data will be used and tested against the economic hopes of advocates of colonialism during that period.

The essay is split up into three main parts. In the first part, the historical background behind German colonialization and the colonies is introduced. After a brief explanation of the empirical strategy for this paper, data will be used to show if the German hopes were fulfilled.

In the 1880s, Germany was an economic leader. Several branches such as the chemical industry were worldwide leaders in their sectors and economic growth was, compared to other countries, very high (Tilly, 2010). Trade rose sharply with the main export goods being products from the metallurgic and engineering sector (Blackbourn, 2003). However, new problems occurred. A global economic downturn led to a decrease in economic growth. Many countries, including Germany itself, created protectionist measures resulting in high tariffs on foreign goods. As many German producers relied heavily on raw materials from other countries, these protectionist schemes hurt them as well. Also, exporters felt the measures, as German goods became more expensive abroad. Another issue was a massive emigration wave of German workers to the United States. About 200,000 people who left the country per year were missing in the German market as potential workforce and consumers (Blackbourn, 2003).

Several German politicians were convinced that colonies are a profitable undertaking and would solve some of these issues. For them, the first and foremost aim was to make sure that, after some time, the territories under German control become profitable and ideally finance the navy plans of that time (Mommsen, 1977; Fabri, 1998). The second aim was to give German companies direct access to raw materials, thereby helping them to avoid punitive tariffs imposed by foreign countries. This would lower the costs of German producers and could give the state the option to subsidize raw materials when needed. Another aspect was the increase of a potential export market (Fabri, 1998). Furthermore, settlement schemes to the German colonial possessions were planned. Thereby, the emigrants should build a German diaspora which still has contact with its mother country and keep their traditions. More important for the economy, they can still work for German companies abroad and also consume German products, thereby contributing to the German economy (Mommsen, 1977; Fabri, 1998). Although there was scepticism towards these plans the advocates of colonialism succeeded after long discussions and Germany entered the scramble for colonies in the 1880s, much later than other countries (Fenske, 1978).

This section will present the German colonies from an economic standpoint, mainly considering their location, the availability of resources, local trading activities and the suitability for settlers from Germany. As shown in the following analysis (Map 1), most of the territories had clear deficiencies which are mainly an outcome of the late entry and the resulting lack of “available” territories. 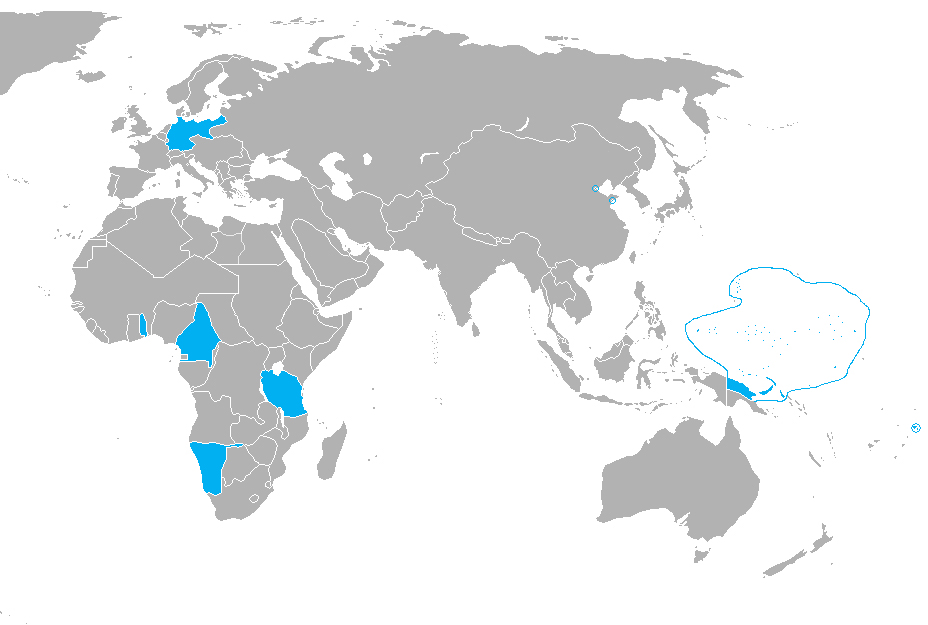 During this period, Germany had four possessions in Africa which were South-West Africa, East Africa, Cameroon and Togoland. These four territories were not bordering each other and were relatively isolated. South-West Africa was a relatively sparsely populated country and only the area between the Kalahari and Namib desert was arable and attractive for European farmers from a climatic standpoint. Diamonds and copper were the main resources in this area (Henderson, 1993). German East-Africa was the largest territory and had a large number of rivers and lakes making it relatively suitable for farming, but hostilities between tribes made administration very difficult and the most attractive part of this area, the trading hub Zanzibar, fell to the British. Cameroon had potentially interesting latex and ivory resources and Togoland offered arable land and cattle farming, but overland travel was very difficult and diseases such as Malaria due to mosquitos inhabiting the local lagoons were a big problem (Henderson, 1993).

The German possessions in the Pacific consisted of, apart from eastern New Guinea, small islands which were spread across thousands of kilometres. The most attractive resources were the copra reserves on New Guinea and Samoa where J.C. Godeffroy & Son, a trading company, created a trading monopoly. Some islands were also used as trading hubs (Henderson, 1938).

A very different case compared to the other territories was the German colonial base of Tsingtao. Its main aim was not of economic, but geopolitical nature. It should serve as a base for the German navy and be used as a trading port for Chinese products. In some sense, it can be seen as a German counterpart to Hong Kong (Henderson, 1993).

The main method will consider using data from that time and comparing it with the goals of the advocates for colonies in the German Empire. This will include budget balancing, trade and migration patterns as these were the main economic arguments in favour of colonies. Particularly of interest are the last years of German colonies when costs for discovery and further expansion had a smaller impact on the data. This method has the advantage that it gives a useful proxy for success as this is not an arbitrary choice, but was rather the basis on which the decision to join the scramble for colonies was made.

The sustainability of government debt was already in those days a key aspect of state budgets, as debt dynamics can create massive issues and potentially lead to default (Carlin and Soskice, 2015). Therefore, this is a top priority for many countries throughout the decades. For the analysis, data for 1913 by the German statistical office is used and split up according to the seven territories. From Table 1, we can see that all territories were unsuccessful regarding budget balancing. In absolute numbers, South-West Africa was the least profitable territory creating an estimated loss of 16,91 million Mark in 1913. However, if we take the differences in size into account which can be done by using the cost coverage measure, the worst results come from the Chinese outpost at Tsingtao followed by South-West Africa and New Guinea.[1] This is not a huge surprise as Tsingtao was a big navy base and not a producer of goods resulting in high expenditure and little income.

Source: Own calculations based on Statistisches Jahrbuch für das Deutsche Reich, 1914. Note: Numbers are in 1,000 Mark.

Looking at Graph 1, it can be seen that budgetary losses were persistent throughout the period with several spikes due to some infrastructure projects such as the Tanganyika Railway. However, it should be taken into account that the colonial adventure was only a minor part of the total spending reaching 0,1 percent of all regular state expenditures in 1913 (Deutsches Statistisches Jahrbuch, 1914). Still, we can say that the hopes of the Germans for a balanced budget in their colonial possessions were not fulfilled.

The following section will cover the question if the needs of the German industry for raw materials were covered by the colonies. In Table 2, the main raw materials exported from the colonies and the total sum of German imports of these materials in 1914 can be seen. Other goods such as cotton were produced as well, but the amount produced was too small to be called substantial. What can be seen from the data is that the main good imported from the colonies was raw rubber. Other relevant products were copra, palm kernels and precious stones. Still, colonies were unable to cover German needs. Apart from precious stones and, on a smaller scale, sisal hemp, no product had a larger coverage than 12 percent. This leads to the result that imports from the German colonies were relatively negligible, especially when taking into account the relatively low importance of sisal hemp and precious stones for industrial production. Hence, colonies did not lead to more independence from international markets.

Table 2. Share of imports from colonies in total imports of the German Empire (1918, in pounds)

Source: Own calculations based on The Economist, 1918. Note: All amounts are in pounds in 1918.

The story was not much different with exports. Time series data between 1891 and 1910 shows that trade with the colonies was clearly on the rise during that period but even at its peak less than 1 percent (Graph 2). The reason was that the natives in Africa and the Pacific Ocean which were living in the German colonial territories had a very different style of living and were simply not interested in German goods (Henderson, 1993). Further, places which were inhabited by people interested in trading with the West, such as Zanzibar or Walvis Bay, were occupied by the British Empire and, as the following section will show, the number of German settlers in the colonised areas was tiny (Henderson, 1938). 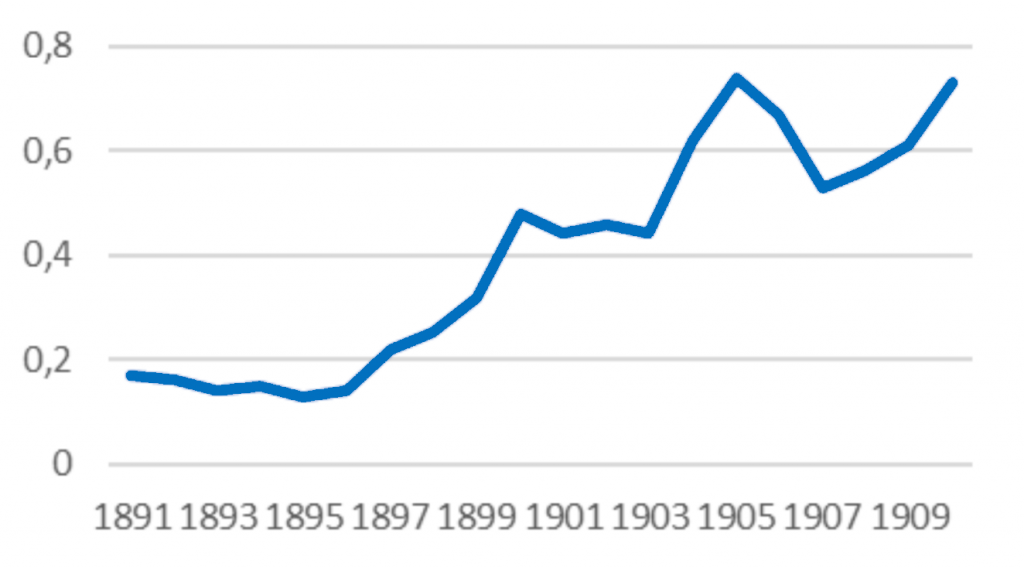 Source: Own calculations based on Henderson, 1938. Note: In percent of total German trade.

In this section, data from the year 1913 will be used (Table 3), as it is the latest data available before World War I (Keltie and Epstein, 1916). The numbers are excluding Tsingtao due to missing information about its white population. However, as this was a military outpost, the number of German civilians in this comparatively small area cannot be expected to be very substantial and can consequently be ignored. The results from 1913 clearly show that the number of German settlers was small with less than 25,000 white people in these areas, even when assuming that all of them were German. More than half of all people settled to South-West Africa, the place with the biggest amount of arable land. The reason for the relatively high percentage of white citizens is, however, rather unpleasant. The number of indigenous people in this area was more than halved after the Herero were massacred after an uprising leading to fewer natives. Still, compared to the high numbers of people leaving Germany at that time towards the United States, this result can be hardly called a success. One of the main reasons for this weak number was the very uncomfortable climate for Europeans and massive issues regarding diseases, especially in areas with a tropical climate such as the coast of Cameroon (Henderson, 1993). Another reason was the decline in migrants after its peak in the early 1880s (Blackbourn, 2003).

Source: Own calculations based on Keltie and Epstein, 1916.

The German undertaking can, from an economic point of view, hardly be called a success. The advocates of colonial possessions set a very high goal to bring people on their side, but the late point of entry forced Germany to take what was left. These resource-poor and scattered territories were not an ideal starting point and, as the data has shown, the economic performance was pretty weak in all aspects. Most colonies were far away from balancing their budget, so the state had to spend money on colonies and their protection, its imports were fairly negligible and the natives were not interested in German goods. Also, German settlers were not very attracted to these territories as climatic differences and disease made life hard and risky and so they still migrated to other places. The outcomes were not unique, though, as the British colonies in that era, despite higher relevance in trade, were also far away from being profitable and an attractive destination for emigrants (Gardner, 2012). Still, taking everything into account, from an economic standpoint, the undertaking was not economically successful.

[1] Cost coverage is equal to revenue divided by expenditures.

*Republished from the original publication on University College London.