Fertility rates have fallen sharply in OECD countries over the last 60 years, a drop mirrored in diminished employment protection over the same period. This column asks whether this greater job insecurity has contributed to declining fertility rates. Using a French labour market reform – a layoff tax that protected older workers at the expense of those under the age of 50 – the authors show that younger workers who felt less job security reduced their fertility by 3.7 percentage points. Though job insecurity reduced family size, it did not decrease the probability of parenthood itself.

Fertility has fallen sharply in OECD countries over the last 60 years (see Figure 1). Women in 2018 had an average of 1.61 children, half the number in 1960, and the OECD fertility rate has been below the replacement level of 2.1 children per woman since 1983. Without any substantial changes in immigration, lower fertility poses a number of economic problems. Both retirement income and medical care are partially financed by taxes on younger members of society, and a drop in the number of young people in the context of rising life expectancy will create substantial stress on public finances. Over the same period, OECD figures reveal that this fertility drop is mirrored in falling employment protection in many countries (OECD.Stat 2022). In this column, we ask whether greater job insecurity may have contributed to lower fertility. 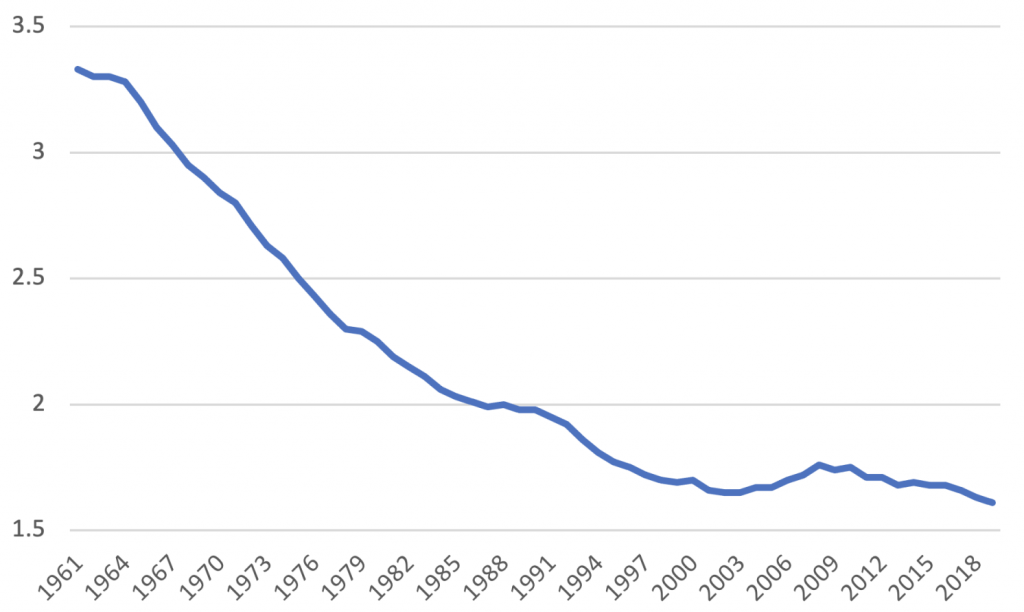 Theoretical analyses (Ranjan 1999, Sommer 2016) suggest that planning the birth of a child will more likely be abandoned or postponed when the (potential) parents are faced with economic uncertainty, as children come with irreversible expenditures. In line with this proposition, a body of empirical work has uncovered negative correlations between fertility and objective aggregate and individual measures that appear to reflect insecurity (Adsera 2004, Hondroyiannis 2010, Schneider 2015, Chevalier and Marie 2017, Comolli and Vignoli 2019, Ayllón 2019, Chabé-Ferret and Gobbi 2018, Busetta et al. 2019, Ciganda 2015, Adsera 2004, De la Rica and Iza 2005, Kind and Kleibrink 2013, Modena et al. 2014, Auer and Danzer 2016, Guner et al. 2019, Lopes 2019, Vignoli et al. 2020).

These objective measures refer to events that have already taken place. However, many people will understand insecurity as referring to the fear of what may come about in the future. We take this latter approach in Clark and Lepinteur (2022), and relate fertility to an individual’s insecurity about their future outcomes on the labour market rather than their experience of a past shock.

To do so, we need to identify an exogenous event that caused some workers to be fearful about their future. Perhaps surprisingly, we analyse a French labour-market reform that increased job security via a higher tax on layoffs. The Delalande tax was introduced into French Law at the end of the 1980s, and was paid (as a multiple of the worker’s monthly gross wage) by firms that laid off workers over a certain age. The amount of this tax rose in 1998, but only in firms with 50 or more employees. The layoff tax at this time applied to workers aged 50 and above. The higher layoff tax protected older workers, but at the expense of those under age 50. Georgieff and Lepinteur (2018) show that these younger workers (in the treated larger firms) experienced greater feelings of job insecurity and were more likely to be laid-off, presumably because they were now relatively less expensive to fire.

We exploit this perverse effect of the 1998 rise in the Delalande tax to carry out a difference-in-differences analysis of the effect of job insecurity on fertility. Intuitively, younger (under age 50) workers in firms with 50 or more employees felt more insecure post-reform, whereas their counterparts in smaller firms felt no such change.

Using the European Community Household Panel, we analyse data on French workers who lived with the same partner pre- and post-reform. We find that greater (forward-looking) job insecurity does indeed significantly reduce fertility. This effect is not uniform: job insecurity does not affect the fertility decisions of low-income or less-educated workers. Equally, lower fertility only appears for workers who already had children before the reform. As such, job insecurity reduces family size (the intensive fertility margin) but not the probability of parenthood itself (the extensive margin).

There is by now widespread agreement that job (and economic) insecurity has considerable effects on individuals. Existing work in this area has considered the links with obesity (Smith et al. 2013), suicide rates (Reeves et al. 2014), mental health (Rohde et al. 2016), gun violence in US schools (Pah et al. 2017), health (Caroli and Godard 2016, Lepinteur 2021), and voting behaviour and political preferences (Bossert et al. 2022). Recent Vox columns have also related insecurity to the rise of populism (Margalit 2019) and child development (Britto 2022). Our results are consistent with this literature, in that greater feelings of job insecurity have real consequences in terms of individual behaviours.

The behavioural response in our study likely reflects a coping mechanism against greater insecurity, and is consistent with the economic definition of ‘temperance’. According to Kimball (1992), temperate individuals make decisions that balance their overall exposure to risk. Greater labour-market risk will then be compensated by less-risky decisions in other domains (for example, by lower fertility). It may also be the case that those exposed to greater risk will look for insurance against that risk. This is the broad idea investigated in Clark et al. (2022), which considers the same reform and dataset, but asks whether the marital decisions of younger workers (and not only those who were already partnered pre-reform) change as their layoff risk increases.

The net effect of greater job insecurity on the probability of marriage is ambiguous. Risk-sharing theory implies that marriage is an insurance mechanism: when the spouses’ income risks are negatively correlated (or indeed anything other than perfectly positively correlated), marriage produces more income stability. On the other hand, workers who now have a greater probability of losing their jobs are probably perceived as being of ‘lower’ quality, insurance-wise.

The net effect in our analysis turns out to be in favour of risk-sharing: greater job insecurity increases the probability of marriage, at least for women. In line with the predictions from risk-sharing theory, this greater marriage inclination is driven by women who marry men with a lower risk of future job loss. The marriage probability of men is not related to their job insecurity. This could show that men are on average less risk-averse than women, or that their ‘value’ as a spouse was reduced to the extent that it counterbalanced their greater desire to marry (with spousal ‘value’ perhaps being particularly salient in societies where men are traditionally considered the breadwinners).

The results in Clark and Lepinteur (2022) and Clark et al. (2022) underline the behavioural reactions to job insecurity. These behavioural changes relate to lower exposure to risk, or insurance against it. As such, the continuing labour-market transformations that may well be perceived as producing insecurity (less employment protection, automation, the gig economy, etc.) will likely have substantial (and perhaps unintended) consequences in many other aspects of our lives: these have to be taken into account when labour-market policy is evaluated.

Clark, A E, C D’Ambrosio and A Lepinteur (2022), “Marriage as insurance: job protection and job insecurity in France”, Review of Economics of the Household, forthcoming.

De la Rica, S and A Iza (2005), “Career planning in Spain: Do fixed-term contracts delay marriage and parenthood?”, Review of Economics of the Household 3: 49–73.

Kind, M and J Kleibrink (2013), “Sooner or later–economic insecurity and the timing of first birth”, Ruhr Economic Papers No. 422.