Much of the literature on the economic effects of war has focused on specific countries or regions, relied on small samples, or spanned only brief periods. This analyitical note investigates the economic effects of wars drawing on a novel database of nearly 400 wars over the past two centuries. The authors find that wars fought on a nation’s own territory result in significant GDP per-capita loss; civil wars have more persistent effects than interstate wars; and certain kinds of conventional research may have significantly understated the long-term economic scars of war.

There is a small but growing literature on the economic effects of wars. A number of studies have pointed to significant negative effects, driven by the destruction of human and physical capital, disruptions to production processes, and heightened uncertainty (Abadie and Gardeazabal 2003, Cerra and Saxena 2008, Cappelen et al. 1984, Thorp 1941). Some, including in literature on the drivers of economic growth, have found no meaningful effects of wars on growth (Acemoglu et al. 2005, Barro and Lee 1994). Others have pointed to positive effects on output, driven by the effects of increased military spending, higher utilisation rates of labour and capital, or increased total factor productivity (Deane 1975, Olson 2008, Organski and Kugler 1980).

Many of these studies have focused on specific countries or regions within countries (Abadie and Gardeazabal 2003, Harrison 1998, Broadberry and Harrison 2005). Some restricted their analysis to only civil wars (Blattman and Miguel 2010, Collier 1999, Hoeffler and Reynal-Querol 2003). Studies of interstate wars have also typically relied on small samples, and often examined GDP losses relative to predictions based on the country’s own pre-trend, either shortly before the war began or based on the full time series (Organski and Kugler 1977, Wheeler 1980, Rasler and Thompson 1985).

Our recent paper (Chupilkin and Kóczán 2022) investigates the short- and long-run economic effects of wars, drawing on a large database of almost 400 wars over the past two centuries. The analysis is motivated by Russia’s invasion of Ukraine in February 2022; however, it takes a broad view of the history of conflicts (see also ERBD 2022).

We use a synthetic control method to examine both immediate disruptions due to wars and any long-term scarring, looking both at countries’ GDP per capita and, more generally, at any effects on their economies’ productive capacity: populations, capital stocks, and total factor productivity.

Existing studies have typically examined such effects by looking at much smaller subsamples of wars, using case studies, pre-trends, or mostly cross-sectional regression-based analysis. We contribute to this literature by using a combination of other countries – which did not experience wars and which resemble the country at war before the conflict – to construct a synthetic control. We then compare the subsequent economic evolution of this ‘counterfactual’ country without a war to the actual experience of the country at war.

Our analysis is thus most closely related to Abadie and Gardeazabal (2003), who introduced the synthetic control method and applied it to estimate the effects of terrorist conflict in the Basque country, as well as to Saxena and Cerra (2008), who documented the behaviour of output following civil wars and financial crises using impulse responses.

We construct a novel database building on the Correlates of War dataset, covering almost two centuries of conflict. This allows us to rely on a much larger sample than previous studies, including both civil and interstate wars, and to distinguish between wars on and off territory between winners and losers and parties initiating the war versus others. To illustrate the effect of the average war in the following figures, we compress wars of varying length into two typical war years by computing the average growth rate during the first and second halves of the war and treating it as the growth rate of the first and second years of the ‘typical’ war.

We find that GDP per capita drops are driven by wars on territory, with GDP per capita even increasing relative to that of comparators for some wars off territory, explaining some of the mixed empirical findings of the existing literature. Wars on territory result in a GDP per capita loss of over seven percentage points relative to a synthetic control the year after the war ends. Civil wars (which tend to be longer and are also more likely to remain unresolved) have more persistent effects than interstate wars. Losers and non-initiators also see significantly larger drops in GDP per capita than winners and initiators, respectively (see Figure 1).

Figure 1. Effects of wars on GDP per capita 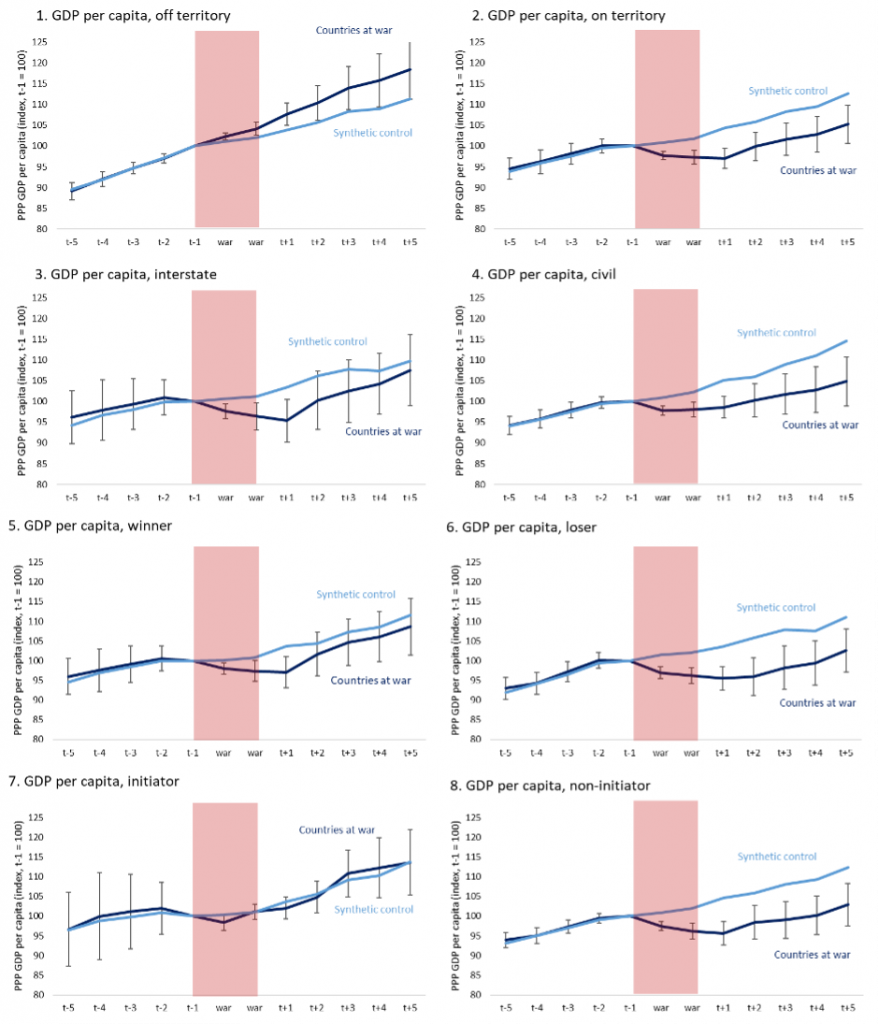 Notes: In all figures t – 1 refers to one year before the start of the war; 90% confidence intervals shown. All civil wars are regarded as taking place on a country’s own territory. Interstate wars are coded as taking place on territory if there were substantial battles within the country’s own borders (excluding minor attacks, border disputes, and attacks targeting only military infrastructure). Other groupings follow the Correlates of War database, based on a general consensus among historians concerning which side won the war and whose battalions made the first attack.

We complement this analysis by also using a production function approach, looking at the effects of wars on economies’ productive capacity: populations, capital stocks, and total factor productivity (see also Vandenbroucke 2012, Broadberry and Harrison 2018, and Akbulut-Yuksel 2020 on the lasting effects of wars on population size, education, and health).

Our results here suggest that a focus on flows, such as changes in value added generated each year, may significantly understate the lasting damage from wars. Even where income per capita recovers, there are lasting scars to labour forces and capital stocks. While total factor productivity rebounds to its pre-war level about five years after the end of a war, the populations and capital stocks of countries at war remain significantly smaller (see Figure 2).

Our paper focuses on average results across all country-wars for which balanced data is available. The paper is also accompanied by an interactive online annex (the Economies at War Atlas), which presents individual countries’ GDP per capita, population, capital stock, and total factor productivity relative to three counterfactual paths: a synthetic control, a simple average across economies when not at war, and their own pre-trend (an example is shown in Figure 3).

Figure 3 Example of the online Economies at War Atlas 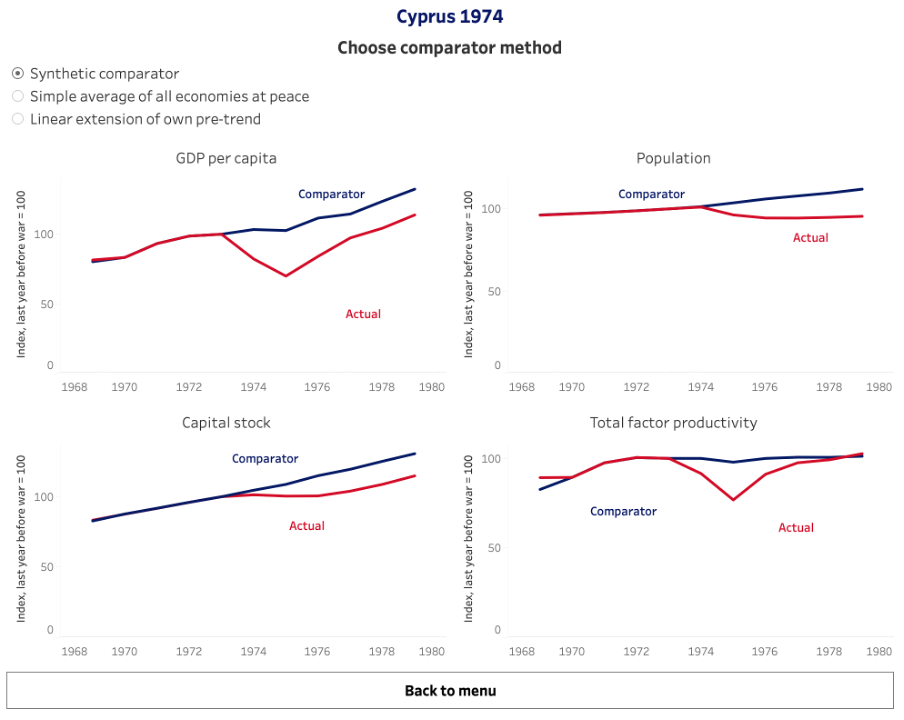 In addition to providing easily accessible information, the Atlas illustrates the benefits of the synthetic comparator approach relative to other methods. A simple comparison with all countries not at war tends to overestimate the negative effects of the war, while a comparison with its own pre-trend tends to under-estimate the ‘true’ effect. The Atlas also aims to increase transparency and mitigate concerns that the averages reported in the paper may be driven by outliers. For the large majority of country-wars, our synthetic comparator closely matches the variable’s own pre-trend before the war, with divergence starting at the time of the war. Finally, we hope that the Atlas can point to avenues for further research; for instance, by enhancing our understanding of the significant heterogeneity in country experiences beyond the typology of wars and the mechanisms behind economic recoveries.

Broadberry, S and M Harrison (2018), “The economics of the Great War: A centennial perspective”, VoxEU.org, 6 November.

Vandenbroucke, G (2012), “On a demographic consequence of the First World War”, VoxEU.org, 21 August.

The Economies at War Atlas is available here.