How does European integration affect reforms and economic growth in the various countries and sectors? We note that the integration triggered product reforms, but neither labour nor financial market reforms, whereby the introduction of the internal market and the euro were equally important.

It is now almost undisputed that European integration has produced winners and losers, with an increasing proportion of the profits going to highly qualified people and to capital owners. However, the role that sectoral differences play in this has not yet been fully explored. For example, integration may have brought disproportionate benefits to the financial sector, while it may have caused disproportionate damage to manufacturing (Cecchetti and Kharroubi, 2015).

New research investigating whether the difficulties in identifying the effects of European integration are due to the heterogeneous effects on the sectors. More precisely, we are examining two questions based on the European experience. First: Has European integration promoted or hindered the implementation of structural reforms in the labour, financial and product markets? Second, do the growth effects of these structural reforms differ more between sectors than between countries?

Country heterogeneity is often cited as a major reason for difficulty in obtaining accurate estimates. In Campos, Eichenauer and Sturm (2020) we compare this argument put forward with the as yet unexplored thesis that the difficulties in determining the effects of European economic integration (euro and internal market) are due to the heterogeneous reaction of the various economic sectors.

Three structural reforms and the growth effects of European integration

How does integration affect economic growth? In general, there are direct effects from increased competition and indirect effects from structural reforms. It is expected that greater flexibility in product markets, financial regulations and employment protection will increase productivity by eliminating biases, improving allocation and increasing competition.

We contribute to the literature on integration, structural reforms and their growth effects in three main ways. First, we pay attention to the thesis of sectoral heterogeneity put forward as a theoretical argument in the literature, but empirically still largely untested, and contrast it with the more widespread argumentation and the evidence that emphasizes country heterogeneity (Campos et al., 2019).

Second, we use more granular measures for labour, product, and financial market reforms. Almost without exception, previous studies focus on broad measures for product or labour market reforms. As these are complex reforms, there can be significant differences in the impact of the individual components. We take the multidimensional nature of these reforms seriously and compare them with the aggregated reform effects. In labour market reforms, we separate changes in labour laws that relate to employees on open-ended contracts from those that relate to fixed-term employees (Adams et al., 2018). For product market reforms, we look at “barriers to entry”, “public ownership” and “price controls” (OECD, 2017), while we analyse financial reforms separately for “credit market controls”, “market structure” and “regulation and supervision” (Denk and Gomes, 2017) .

Third, our analysis covers up to 36 countries since the early 1970s, which is more years and more countries than a series of previous studies that led from the landmark study by Alesina et al. (2010) to Galasso (2014) to Dias da Silva et al. (2018) are enough. We capture the staggered introduction and expansion of the internal market and the euro area. Our much longer time window includes recent economic events such as the global financial crisis and the European sovereign debt crisis and allows us to assess and compare short-term and long-term effects.

We formulate three main hypotheses: 1) integration promotes structural reforms, 2) the internal market and the euro have similar effects on reforms, and 3) the growth effects of integration and reforms vary by sector and country.

We use common OLS regressions with country, year, and sector effects, and estimate short and long-term outcomes using event study models and country and annual sample comparisons as described in the seminal paper by Alesina et al. (2010) can be used.

Third, we note that the familiar difficulties in identifying robust effects of reforms on economic growth appear to be due to country heterogeneity rather than sectoral heterogeneity. We note that with regard to the growth effects of the internal market, the euro, product, labour or financial market regulation at conventional levels of statistical significance, there is only very little sector heterogeneity. These results cannot support the thesis that sectoral heterogeneity is the root cause of the elusive effect of European integration and structural reforms on value added growth. So, is the heterogeneity of the countries to blame after all?

Indeed, our results suggest that country heterogeneities do indeed bear most of the burden of the insignificant impact of reforms and European integration on value added growth, which the Campos et al. (2019) further supported (see Figure 1). 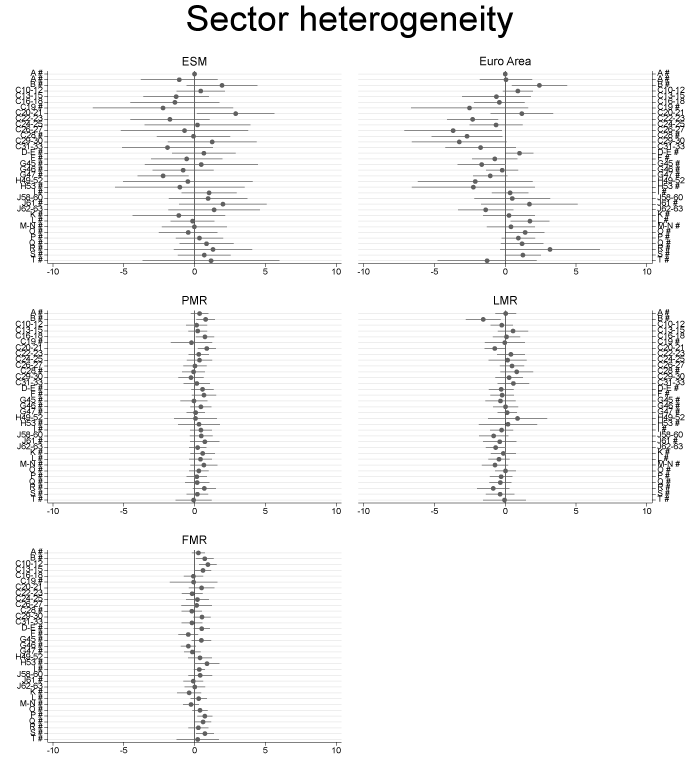 Notes: The coefficient diagrams show the estimated coefficients for the interaction between the country dummies [1] and the variables represented in the title of the respective part (i.e. European Single Market (ESM), euro, product market reforms (PMR), financial market reforms (FMR) and labour market reforms (LMR) ). 95% confidence intervals are shown. The reason some countries are not listed is because of their multicollinearity.

Using a much larger sample of countries, longer time windows, sectoral outcomes, more granular coverage of reform measures, and a more sophisticated empirical approach than most existing studies, we have formulated three main conclusions. First, our estimates confirm earlier studies that show that the single market and the euro triggered product reforms, but not labour or financial market reforms. Second, contrary to the existing literature, we find that the single market is no less important than the euro for triggering structural reforms. This difference between our and previous results is explained by our larger sample of countries and the expanded time window and is confirmed by our more granular and detailed record of reform measures. Third, we show that the familiar difficulties in identifying robust effects of reforms on growth appear to be largely driven by country differences and much less by sectoral heterogeneity.

We offer four main suggestions for future research. Firstly, we focused on product, financial, and labour market reforms, but future work should broaden this range and also include other reforms (such as tax and trade). Secondly, future research should try to study the role of firm heterogeneities in explaining the varied experiences with European integration and structural reforms. Thirdly, we have followed the literature in stressing the role of economic crises in general, and banking crises in particular. Future work should examine the relative importance of political and economic crises in driving structural reforms. A fourth suggestion is to evaluate the effects of major recent events (e.g. global crisis and COVID-19) on reforms and their economic effects, once the necessary data is available.

Badinger, H (2007), “Has the EU’s Single Market Programme Fostered Competition? Testing for a Decrease in Mark‐up Ratios in EU Industries”, Oxford Bulletin of Economics and Statistics 69(4): 497-519.