_ Christian Keuschnigg, Linda Kirschner, Michael Kogler, Hannah Winterberg, FGN-HSG, University of St. Gallen. Republished from the original paper with some chapters omitted.The original title of the paper is “Italy in the Eurozone”.

Using a DSGE model with nominal wage rigidity, we investigate two scenarios for the Italian economy. The first considers sustained policy commitment to reform. The results indicate the possibility of ‘growing out of bad initial conditions’, if fiscal consolidation is combined with a program for bank recovery and for competitiveness and growth. The second scenario involves a strong asymmetric recession. It is likely to be very severe under the restrictions of the currency union. A benign exit from the Eurozone with stable investor expectations could substantially dampen the short-run impact. Stabilization is achieved by monetary expansion, combined with exchange rate depreciation. However, investor panic may lead to escalation. Capital market reactions would offset the benefits of monetary autonomy and much delay the recovery.

The global financial crisis revealed large imbalances in the Eurozone. Banks were highly leveraged and unable to absorb large shocks, requiring government support. With the increase in public debt, doubts emerged about the solvency of several member states.

Investors thus charged higher risk premia leading to rising borrowing costs for those governments. In addition, some countries in the Eurozone periphery had gradually lost competitiveness in the pre-crisis boom during the early 2000s and have experienced stagnant growth thereafter. The latter significantly constrains the borrowing capacity of governments and hampers the role of the fiscal budget in stabilizing the economy during a recession. Instead of providing fiscal relief, governments may be forced to pursue a policy of fiscal consolidation. This reinforces the downturn and ultimately magnifies the share of non-performing loans, thereby further weakening banks.

Italy arguably comes close to the Eurozone trilemma of fiscal solvency issues, problems in the banking sector and stagnant growth. On all three fronts, the country starts from unfavorable initial conditions and is especially vulnerable to shocks. First, public debt is excessively high and accounts for 130 percent of GDP. The chronically high debt level is mainly a result of the 1980s and early 1990s. Between the late 1990s and 2008, it remained stable around 100 percent of GDP. However, the financial crisis led to an increase in the public debt ratio by roughly 30 percentage points.1 Second, Italian banks suffer from many non-performing loans. Their share increased from six to 16 percent of total loans between 2006 and 2013 (Schivardi et al., 2017). Another source of financial instability is that banks have held large amounts of domestic sovereign bonds, more than 11 percent of bank assets in 2017 according to ECB data. Third, the Italian economy has long suffered from sluggish growth. In 2017, real GDP per capita was virtually the same as in 2000. An important reason for this pattern is stagnant or declining labor productivity since the 1990s, which contributed to rising unit labor costs and deteriorating competitiveness.

The present paper formulates a dynamic stochastic general equilibrium (DSGE) model to analyze the Eurozone trilemma and to evaluate policy options for Italy. We first simulate how sustained policy commitment to fiscal and banking reforms within the monetary union can help Italy overcome bad initial conditions and converge to a new steady state. Subsequently, we simulate three counterfactual scenarios in case of a severe, asymmetric recession in Italy: (i) continued membership in the Eurozone, (ii) a ‘benign’ exit from the Eurozone, and (iii) an ‘escalating’ exit. An exit replaces fixed by flexible exchange rates and allows for an autonomous monetary policy tailored to the Italian economy. These scenarios and our focus on events following a recession reflect the view that money and exchange rates affect real activity in the short and medium run due to nominal rigidities but are largely neutral in the long run. Given the uncertainty about how an exit from the Eurozone could be organized, we consider two distinct cases. The ‘benign’ scenario pictures the best case without severe short-run disruptions such as a widespread loss of confidence. In contrast, the ‘escalating’ scenario introduces investor panic with runs on banks and a flight to safety with a large sell-off of sovereign bonds. The paper sets out a three-region DSGE model that features Italy, the rest of the

Eurozone and the rest of the world. The Italian economy includes a banking sector, a government, and a real sector and thereby captures three reinforcing driving forces of a crisis within the Eurozone. The other two regions are intentionally kept stylized. The regions are connected with trade in goods and capital flows. The key rigidity in the model is nominal wage stickiness, which allows monetary policy to have real effects. Importantly, we introduce a regime change from monetary union to a new currency with flexible exchange rates and renationalization of monetary policy. The model is empirically implemented: The initial steady state is calibrated to match Italian data in the early 2000s. Adding structural shocks to the model and using Bayesian estimation procedures allows us to track past performance and approximately replicate time series until 2017.

Second, the short- and medium-term response to an asymmetric recession markedly differs depending on whether the country continues to be part of the Eurozone or exits. An exit would allow Italy to conduct an independent monetary policy more tailored to the specific needs of its economy and to depreciate its new currency. Nominal rigidities are critical for this result as monetary expansion may immediately depreciate real wages, thereby increasing employment. Compared to continued membership, the recession generally reduces real variables like domestic output, employment and capital stock less strongly in the short but more strongly in the medium run if Italy exits.

Third, an escalating exit accompanied with investor panic would eliminate any such short-term gains from a more flexible monetary policy and would magnify the recession. An important driver are strongly rising risk premia for banks and governments, which translate into higher borrowing costs and significantly lower investment. The existing literature on the Eurozone is large and predominantly relates to specific aspects of the crisis. The aim of the present paper is to capture vicious spirals and reinforcing feedback loops in a DSGE model and evaluate alternative policy scenarios. Specifically, it compares the recovery following a recession under continued membership in the monetary union with two exit scenarios. Closest to our endeavor is the research by Gourinchas et al. (2016) and Chodorow-Reich et al. (2019) who suggest an open economy New Keynesian DSGE model to explain the evolution of the Greek economy during the crisis. Martin and Philippon (2017) develop a stylized two-country model to analyze the contrasting behavior of the periphery and core countries and to investigate macroprudential policies. They also include amplifying feedback mechanisms in reduced form. Gilchrist et al. (2017) introduce a DSGE model with two financially heterogeneous regions where financial frictions prevent price adjustments. None of these papers considers an exit scenario with a complete regime shift, that is, moving from fixed to flexible exchange rates and from common to national monetary policy.

Kriwoluzky et al. (2020), in turn, explicitly analyze a potential exit from a monetary union using a New Keynesian model. They focus on exit expectations during a sovereign debt crisis, which contribute to rising interest rates for public and private borrowers prior to an exit thereby reinforcing the debt crisis and depressing economic activity. The importance of such expectations is one reason why we model shocks to risk premia in our ‘escalating exit’ scenario. Furthermore, an exit scenario resembles the break-up of currency pegs. Schmitt-Grohe and Uribe (2016), for example, show how downward wage rigidity combined with free capital mobility causes overborrowing in booms and unemployment during recessions, resembling key aspects of the Eurozone crisis.

In a currency union, the internal exchange rate is fixed. Monetary policy is no longer available to stabilize the business cycle in a single member country but focuses on the average state of the entire union. Important adjustment mechanisms are missing. To compensate for the loss of monetary autonomy as a tool of macroeconomic stabilization, an individual member country must instead rely on fiscal policy and on automatic fiscal stabilizers. These instruments require low public debt, however. Banks can only help absorb shocks if endowed with sufficient equity and if lending activity rests on a low share of non-performing loans. Finally, a competitive and innovative economy is also more resilient and can better absorb macroeconomic fluctuations without creating large employment losses. In contrast, a recession can set off a vicious cycle if these conditions are not met, driven by mutual contagion between an overly indebted sovereign, a vulnerable banking sector, and an uncompetitive real economy.

Today, the Italian economy appears to be in a vulnerable position with respect to all three focal points. Using a New Keynesian DSGE model with nominal wage rigidity that pictures Italy and the rest of the Eurozone, this paper analyzed two broad alternatives for economic policy. The first scenario considered the possibility of sustained reform within the Eurozone, involving strong policy commitment over several decades. The results indicate the possibility of ‘growing out of currently unfavorable initial conditions’, provided that sustained fiscal consolidation is combined with bank recovery and a program for competitiveness and growth.

On the other hand, a strong asymmetric recession could interrupt any attempt at reform and move the economy ‘off track’. In a second scenario, we considered the possible developments in a severe asymmetric recession. We report three main insights. First, an asymmetric recession within the Eurozone is likely to be very severe, given the absence of typical shock absorbers. Second, a benign exit from the Eurozone with stable investor expectations could substantially dampen the negative short-run impact of a recession.

On the negative side, the economy takes significantly longer to recover. Stabilization is achieved by an aggressive monetary expansion, combined with exchange rate depreciation to restore international competitiveness. However, ‘stable investor expectations’ after an exit might be rather unrealistic, given the large vulnerabilities. Third, investor panic may lead to an escalating exit with funding stops due to sudden jumps in risk premia, which magnify private and public borrowing costs, thereby further depressing investment and constraining fiscal policy. Unfavorable capital market reactions tend to offset the advantages of monetary autonomy. Such an exit scenario makes the recession as deep as under continued membership, while considerably delaying the full recovery.

Figure 1. Reform Within the Eurozone 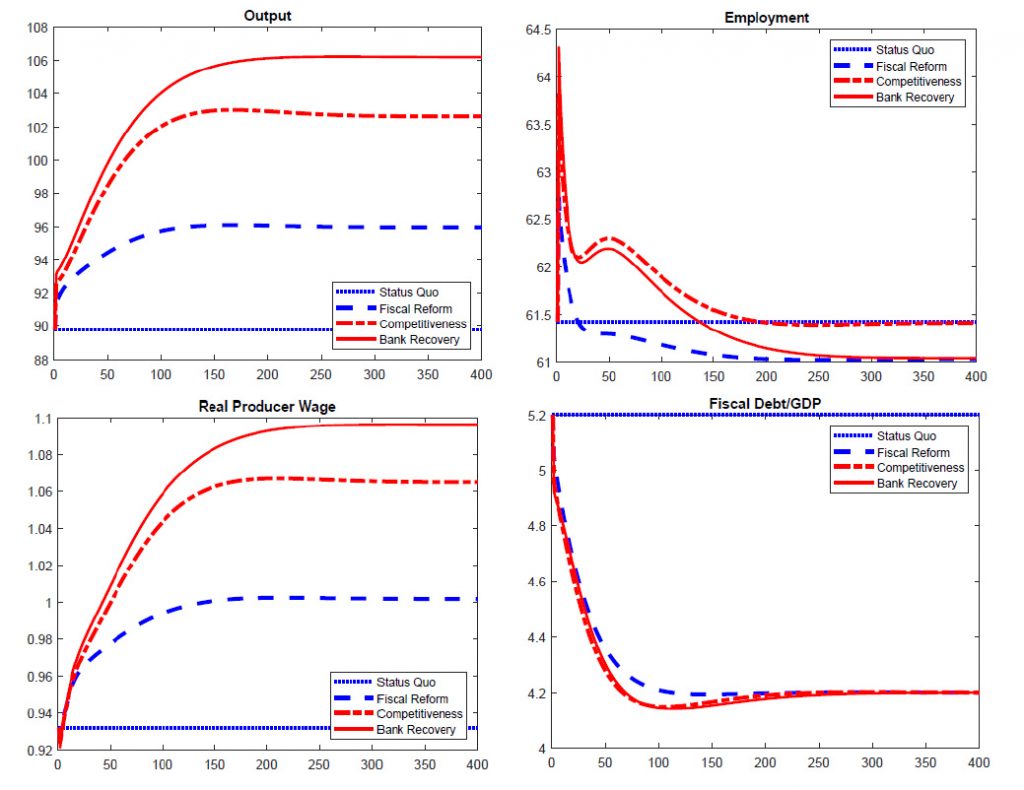 Figure 2. Recession and Exit from Eurozone 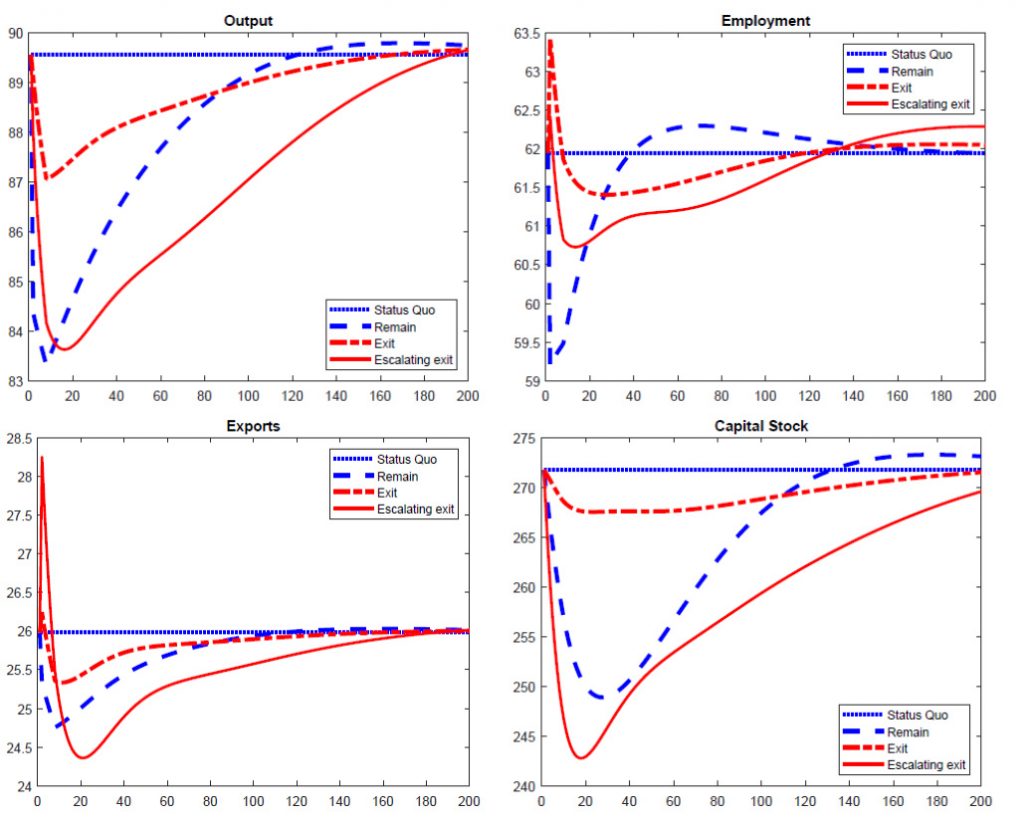 Figure 3. Recession and Exit from Eurozone 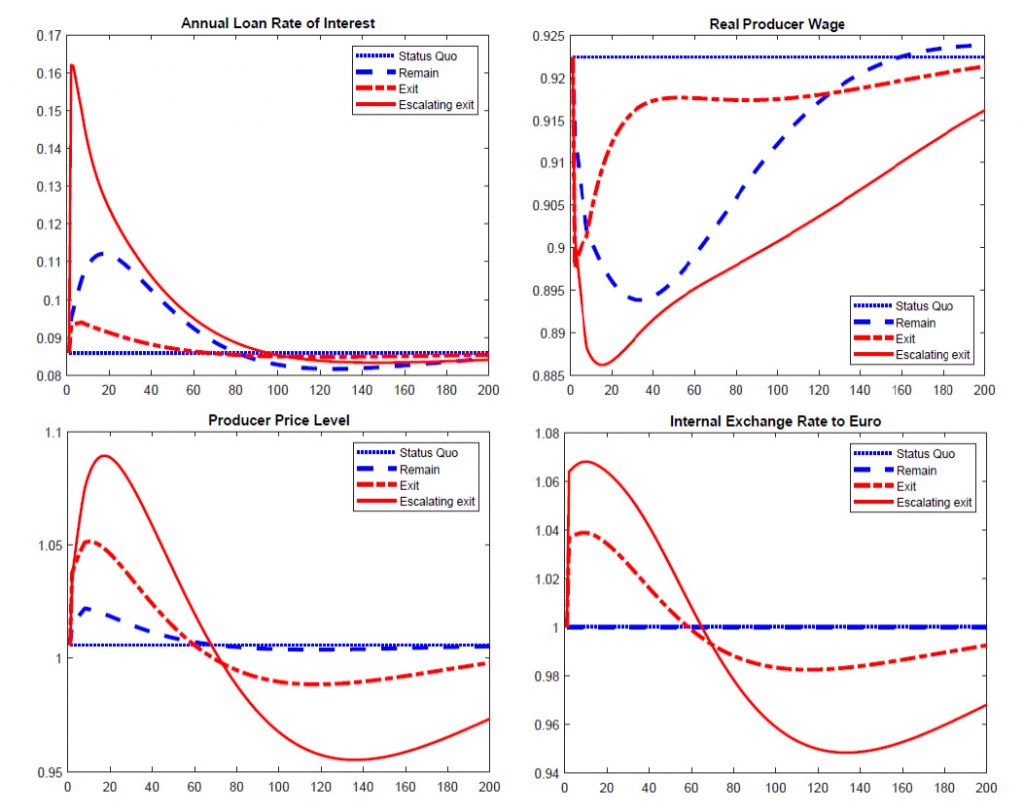 1 Public debt is likely to further increase by the same amount due to costs of the current Covid epidemic. Our paper, however, is not about the Covid shock which affects all Eurozone member countries.