Military interventions and economic sanctions are increasingly seen as strategic substitutes for achieving national and global security objectives, both impose economic costs. We quantify the lower bound of the costs of sanctions using a gravity model of international trade and a general equilibrium simulation model. We find that sanctions amount to a loss in GDP of about 34 billion USD in 2020 for the sanctioning NATO countries collectively, but the costs of sanctions are very unevenly distributed. No other country contributes as much as Germany (8.1 billion USD), while the costs for the US amount to 2.6 billion USD. Accounting for sanctions, countries’ contributions to global security as a share of GDP are closer to the 2% NATO target than a narrow focus on military expenditure alone would suggest. Hence, there is less free riding than some observers suspect.

Table 1 shows the breakdown of the economic cost of sanctions. Adding over all NATO members, the results imply that sanctions impose an economic cost of approximately 34 bn USD. Compared to 1,09 bn USD of total military spending, this is relatively minor. However, the burden is almost exclusively borne by EU members of NATO who contribute about 30 bn USD through sanctions. 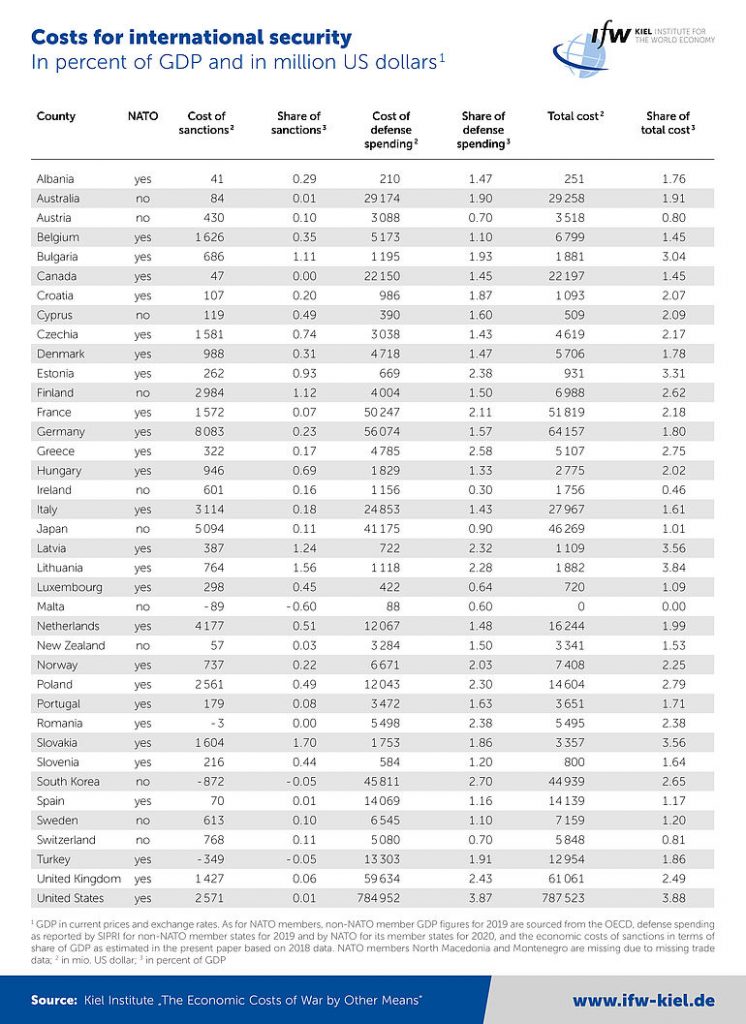 The EU members who are also in NATO spend 1.65% of GDP on military; sanctions including, they contribute 1.89%, only slightly shy of the envisaged 2% target. In the case of Germany, about 12.6% of the total contribution to collective security falls on sanctions; in countries with larger military budgets like the United Kingdom or the US that share is 2.3% and 0.3%, respectively. In smaller countries the share can be as high as 48% (Slovakia). Hence, there is a very large degree of heterogeneity in the cost burden sharing of sanctions.

Summarizing, one can conclude that sanctions are costly and that these costs are borne to a greater extent by European countries than the US. Moreover, these sanctions account for a significant share of the total expenditure undertaken toward maintaining collective security for a large number of NATO members.

*Republished without prior written consent. Republished for educational purposes only.