In 2019 the EAEU officially celebrated its five-year anniversary. How was the Union’s aggregate economic performance over the past five years, i.e. from 2014 to 2018? And, during the study period, did the EAEU move closer towards macroeconomic stability and macroeconomic convergence. 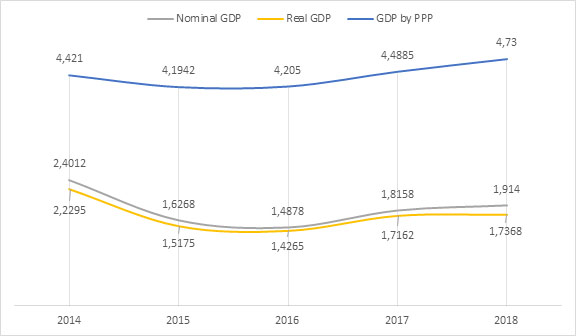 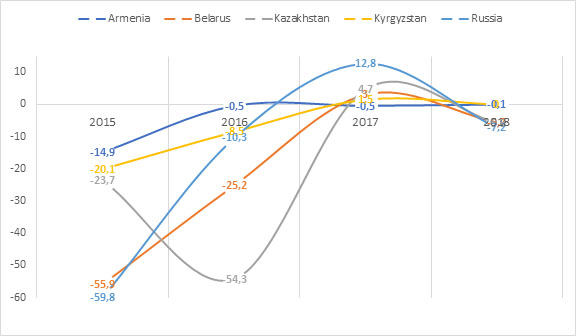 In 2014-2015 the Union’s largest economy – Russia – was hit by several adverse factors: the Ukrainian crisis, international sanctions and a drop in oil prices, which also directly affected Kazakhstan. This led to a recession in the Russian Federation, and consequently in the other member states, which rely on the remittances and consumption from Russia. In 2015 its economy contracted by 2.5%, that of Belarus by 3.8%. By 2016 Armenia’s GPD growth rate slowed down to 0.2%. However, from 2017 onwards the Eurasian economies recovered again. In that year the EAEU’s GDP growth rate reached 1.9%, in 2018 – already 2.5% (Chart 3, Table 3). 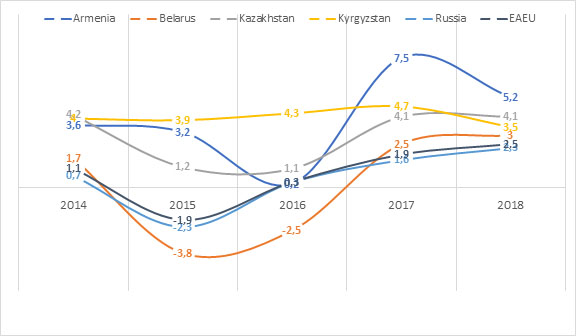 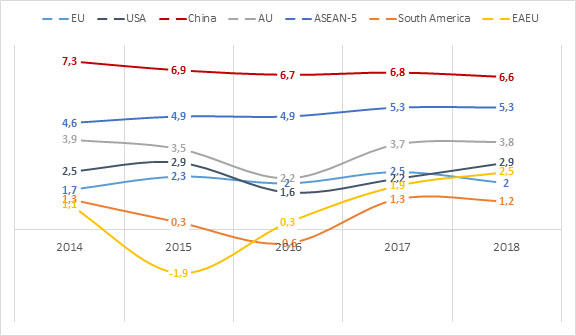 The German ifo Institute for Economic Research predicts that, despite the global economic cooldown, Russia’s economy will grow by 2.6% in 2020 and even by 3% in 2021. Russian GDP growth is estimated to be higher than that of Turkey, South Korea, Latin America and the Western countries, which are expected to grow by around 1.7% to 2.4%. As reasons for the relative lively economic upswing, the Munich economists name further interest rate cuts by the Russian Central Bank, which are expected for the coming months, and, above all, a planned expansion of the national fiscal policy. As part of a program for additional investment in infrastructure, health care and the education system, which runs until 2024, the budget will provide funding of around USD40 bln or 1.5% of the country’s GDP. As a result, economic expansion in Russia is expected to strengthen during the forecast period. However, due to the slowdown in the international economy and the new OPEC-Plus agreement, which foresees a reduction in oil production, exports are unlikely to increase during the forecast period. Also, no broad recovery in private investment is expected, – the research publication states. [1, p. 5] 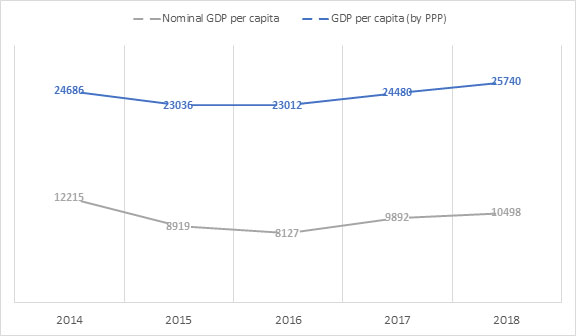 The more equal the contribution of the member states to the overall GDP of an integration bloc, the better for its sustainable economic development. Unfortunately, as already said, the EAEU is very dependent on Russia’s economic performance and its role remained high during that period: 86.7% in 2014 and 86.8% in 2018 (Chart 6, Table 6). However, it is worth noting that the large weight of one of the member states is common for many other regional integrations, including USMECA and MERCOSUR. [2, p. 150] 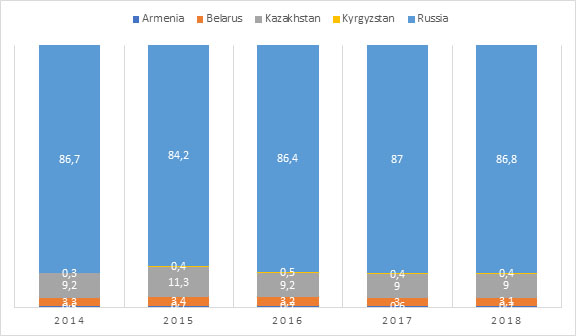 Macroeconomic convergence is a very important factor for the sustainable economic development of a given integration bloc. According to the EAEU Treaty, the member states must conduct a “coordinated” exchange rate policy (Article 64), as well as an agreed macroeconomic policy with the following “convergence criteria” (Articles 62, 63):

Currently, the introduction of a single currency is not planned. Instead, the member states agreed to establish a common financial market (Article 70) together with a “supranational financial regulator” by 2025.  These relatively moderate aims of monetary integration in the EAEU, as compared to that of the EU, can be explained by the current trends and developments of the financial markets, monetary policies and macroeconomic conditions in the EAEU region. 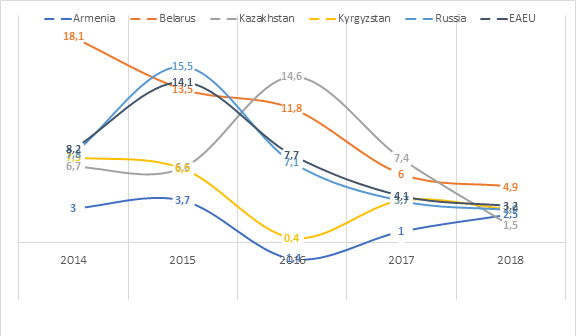 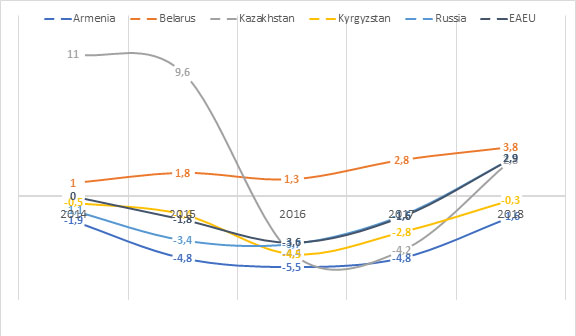 Over the past five years the EAEU as a whole had a comparatively low average government debt of 12.5% of the Union’s GDP. Only Armenia and Kyrgyzstan didn’t meet the government debt convergence criteria. From 2016 on Armenia exceeded the acceptable level by 7 pp in average and Kyrgyzstan by 9 pp in average during the whole period. Both were able to slightly decrease their excess by the end of the period (Chart 9, Table 9). 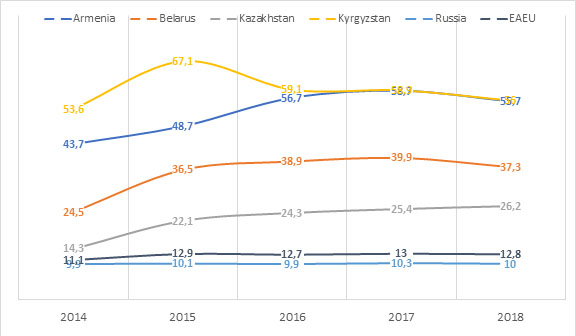 The EAEU Treaty does not set the aim that the member states should fix or peg their national currencies to the ruble or to an EAEU currency basket, but in Annex 15 of the EAEU Treaty it is stipulated that their “exchange rate policies shall be coordinated by an independent authority consisting of the heads of national (central) banks of the member states determined under an international treaty within the Union”. In June 2019, the EEC Board approved the draft “Agreement on the Establishment of an Advisory Council on the Exchange Policy of the EAEU member states”.

During the past five years we saw diverging national exchange rates tendencies, with that of Belarus, Kazakhstan and Russia devaluating by 18.8%, 19.8% and 11.7% respectively (in relation to an international currency basket with 2010 as the basis year), while that of Armenia and Kyrgyzstan were revaluating by 4.5% and 14.5% respectively. Despite of this divergence, the exchange rates of all the four other EAEU member states depend more or less on the course of the Russian ruble. The exchange rates of the Russian ruble and of the Kazakhstani tenge themselves are strongly influenced by the international oil price (Chart 10, Table 10).

Chart 10. Influence of the international oil price on the real effective exchange rate of the Russian ruble and Kazakhstani tenge against foreign currencies (in % in relation 2010 = 100%, Brent average annual oil price at USD per barrel, 2014-2018) 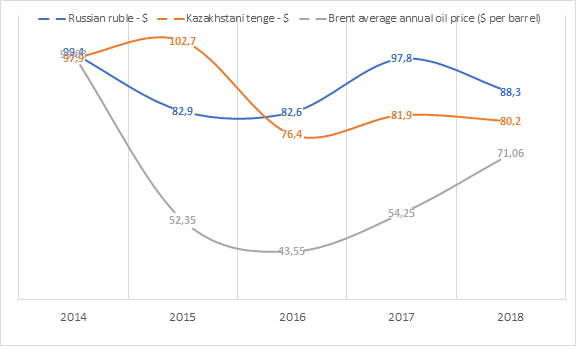 Dollarization of the financial markets, internal and external trade is considered a major challenge in the EAEU, it seriously impairs the effectiveness of the monetary transmission process. In 2016 in the EAEU on average 45% of the deposits and almost 60% of liabilities were held in US USD. In the EU these indicators were 22% and 14% respectively. Also, external trade with third parties and internal trade between EAEU members states, except with Russia, is conducted mainly in USD and EUR [5, p. 6].

A recently published study by the Eurasian Economic Commission, which compares the degree of integration of various regional economic blocs, has shown, that the EAEU increased its macroeconomic convergence from 56% in 2014 to 59% in 2017. In this aspect it came second to the EU, which achieved a macroeconomic convergence of 91% in 2017, but was ahead of both ASEAN (33%) and MERCOSUR (34%). [6, p. 73] Deeper macroeconomic convergence within the EAEU might be achieved if, similar to the system in the EU, the EEC would be given the right to impose sanctions on member states that violate the criteria.

At the beginning of 2019, the Eurasian Economic Commission published a report that analyzes the positions of the EAEU member states in 16 international ratings, which assess various spheres of economic development for the period from 2010 to 2018. According to the study, the EAEU overall occupies the highest positions (index values) in macroeconomic stability:

In general, the following conclusions can be drawn in response to the question of whether the Eurasian Economic Union managed to ensure the stability and convergence of the levels of macroeconomic development of its member states during its first five-year period:

Firstly, evaluating the member states by levels of socio-economic development and the degree of their macroeconomic convergence with each other, the EAEU appears as a “two-tier” economic integration bloc. On the one hand, the EAEU initiating countries – Belarus, Kazakhstan and Russia, form a “core” integration project, where the macroeconomic convergence between them is quite noticeable. On the other hand, the newer and smaller member states – Armenia and Kyrgyzstan, lag behind this “core” in terms of both the level and the speed of convergence. In the medium term, one can hardly expect a change in this trend.

In this regard, for the further development of a coherent macroeconomic policy, the EEC and member states should not chase after some symbolic unity of indicators, behind which real distortions may lie. Instead, they should strive to implement a purely pragmatic policy, which would maximally meet the national interests of all of the member states and would provide them both comparative and absolute integration benefits. Here, further research on the implementation of optimal “multi-speed integration” would be advisable, especially since in recent years this concept has been widely discussed in the European Union [13, p. 8].

Secondly, although between 2014 and 2018 all member states in different years missed the convergence criteria in one area or another, they still generally improved their performance by the end of the study period due to a partial restoration of the regional economic cycle in 2017-2018. Especially noticeable was the convergence of inflation rates, which is partially due to a voluntary coordination and an increased efficiency of the monetary policies of the Union member states.

Thirdly, in order to achieve a sustainable coordinated economic development of the EAEU member states, further improvement of the organizational and institutional environment in this area will be required. One of the right steps in this direction will be the establishment of the “Advisory Council of the National (Central) Banks on the EAEU exchange rate policy”. Furthermore, the creation of advisory councils between the national (central) banks and national governments on inflation, budget deficit and public debt would be advisable. These inter-central bank / intergovernmental coordinating bodies on monetary policy could be located on the premises of the EAEU supranational financial regulator, which is to be set up by 2025 in Kazakhstan. And all fiscal policy coordinating bodies could be located either in Yerevan or in Bishkek.

A more concrete specification of the goals, objectives and mechanisms for pursuing a coherent macroeconomic policy would also be required. E.g., in the monetary sphere, the Union central banks could consider the feasibility of a common inflation (price stability) target of 4 percent.

In the longer term, purely voluntary interstate coordination without any supranational levers on the national governments and central banks is unlikely to be sufficient for a more sustainable macroeconomic integration in the future. Looking at the European Union, one might consider the possibility of granting the Eurasian Economic Commission or the future supranational financial regulator in Nursultan the right to impose financial sanctions on member states that violate the convergence criteria.  Here it would be important to create both a warning mechanism and a corrective one.

Table 10. Real effective exchange rate of the national currencies of the EAEU member states against foreign currencies (in % in relation 2010 = 100%)