China is building huge savings. The rise in the international financial markets is inevitable. But how profitable are Chinese foreign investments? And what is the strategy of Chinese investors?

Even so, China’s impact on global financial markets has so far been modest. Among other reasons, this is mainly due to strict regulation. Large Chinese institutional investors have only been allowed to invest in foreign financial products since 2006 – and only to a limited extent: Individual investors are still not allowed to invest in foreign financial products. Liberalization measures are being introduced cautiously and only gradually in order to avoid abrupt capital outflows. In February 2019, the total amount of approved investments was around $ 100 billion.

Modest returns at home and abroad

Two reasons speak in favor of further liberalization of capital flows: On the one hand, large parts of the foreign assets are invested in government bonds and therefore generate only a modest return. This is even lower than the interest on Chinese government bonds. As a result, China has suffered net capital losses since 2009. Liberalization could change the composition of China’s international assets – towards somewhat riskier investments with higher returns.

The second reason in favor of further liberalization steps is the large proportion of domestic assets that are in bank accounts. These also only yield a modest return because, among other things, there is a lack of suitable domestic financial investments.

The cross-border capital flows in China have received little attention in research so far. The economists Isha Agarwal, Grace Weishi Gu and Eswar Prasad (2019) from the Canadian and American universities of British Columbia, Santa Cruz and Cornell examine how the rise of China is affecting the global financial markets. Her focus is not on the investments of the Chinese central bank or the government – as for example with the Belt and Road initiative – but on institutional investors who make the majority of the new investments. The researchers are particularly interested in the countries and sectors in which China invests worldwide.

Since China does not provide data on direct and capital investments to the International Monetary Fund, the authors rely on obtaining the necessary data from the recipient countries. Your data set includes information on foreign investments by 42 institutional investors from China in the period from 2008 to 2017.

In a first step, the researchers examine the countries in which Chinese investors are investing disproportionately large amounts. To do this, they use the concept of overinvestment. According to this concept, each country is weighted on the basis of its share in the global stock market capitalization. If its share of the Chinese investment volume is greater than its weight on the stock markets, there is overinvestment (see Figure 1). Hong Kong, for example, receives the most overinvestment – about 23 percent more than the SAR should receive due to its market weighting. On the other side of the spectrum is the US. They receive around 21 percent less Chinese investment than they should receive according to stock market capitalization, making them the country with the largest Chinese underinvestment.

Figure 1: Over- and underinvestment by Chinese investors abroad 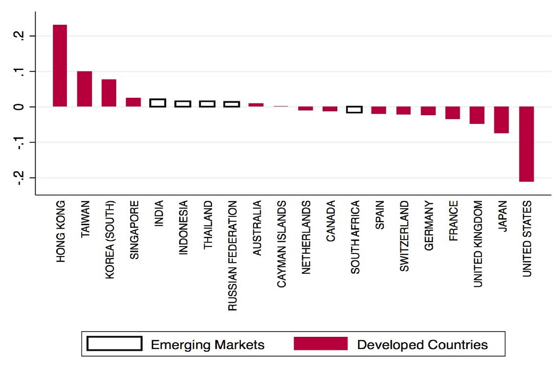 Note: The figure shows the ten most overweight or underweight countries in the portfolios of Chinese investors.
Source: Agarwal et al. (2019), Fig. 8

The analysis shows that Chinese investors invest particularly heavily in developing and neighboring countries. They invest less in industrialized and distant countries. The researchers estimate that a common border increases overinvestment by around 18 percentage points compared to the countries that do not share a border with China. They also show that China invests particularly heavily in countries with weak state institutions, such as India, Indonesia or Thailand. For example, if the efficiency of the public sector increases by one level on a five-point scale, overinvestment falls by 13 percentage points.

The bilateral trade volume also increases investments: if the trade share of total Chinese trade volume increases by 1 percent, this increases overinvestment by 0.4 percent. The reason for this effect is that increasing trade also improves knowledge about trading partners: about the language, customs or regulations in a country. This knowledge facilitates further financial investments by Chinese investors in that country.

Agarwal and her co-authors also look into which sectors are invested in within a target country. To do this, they again use the concept of overinvestment: If the investment share of a sector is greater than the share of the national stock market capitalization, then one speaks of overinvestment in this sector. The analysis shows that Chinese investors invest excessively in the construction and communication sectors, and in developing countries also in mining. In contrast, industry and the financial sector are underweighted. When it comes to investments in industrialized nations, the high-tech sector is significantly overweighted, although across all countries, Chinese investments in the high-tech sector are underweighted by 10 percent.

How can one explain these observations? One hypothesis of the researchers is that institutional investors from China invest abroad primarily in those sectors in which China itself is not very productive and has a comparative disadvantage. Sectors in which China imports disproportionately high levels. Examples are mining, the development of computer software or communication technology. In fact, an estimate shows that overinvestment in a sector increases by 4.5 percent if the comparative disadvantage increases by one index point. [1] In addition, the authors show that investments flow disproportionately into those countries that overflow in the respective sectors have a comparative advantage.

Diversification plays an important role. In China itself, a lot of capital flows into sectors in which the state has a comparative advantage. It can therefore make sense to invest in other sectors abroad. Information advantages are another explanation for investment behavior. Because an increasing bilateral trade volume also entails higher investments. In doing so, the investors use the information they receive through the imports from this foreign sector. However, considerations of return or learning effects do not play a significant role in investment decisions, according to the study authors. Learning effects would mean that the investments are mainly used to improve local technology.

* Next Generation: The “Next Generation” initiative encourages young scientists, decision-makers and the public to inform them about new scientific findings. The best students summarize the results of selected publications in leading economic journals. These empirical and theoretical foundations find their way into politics and economics in a clear and well-processed, short form, where they are also used as decision-making aids. Further information on the project and current articles can be found on the website of the University of St. Gallen.

1 The average index value is 1, with a standard deviation of 1 as well.

Translated into English by Yuri Kofner.