Despite significantly reducing non-tariff barriers since its inception in 2015, [1] the Eurasian Economic Union couldn’t increase intra-union goods trade in relation to extra-union goods trade, which levelled at around 7.5 to 8 percent and 92 to 92.5 percent respectively (Chart 1). 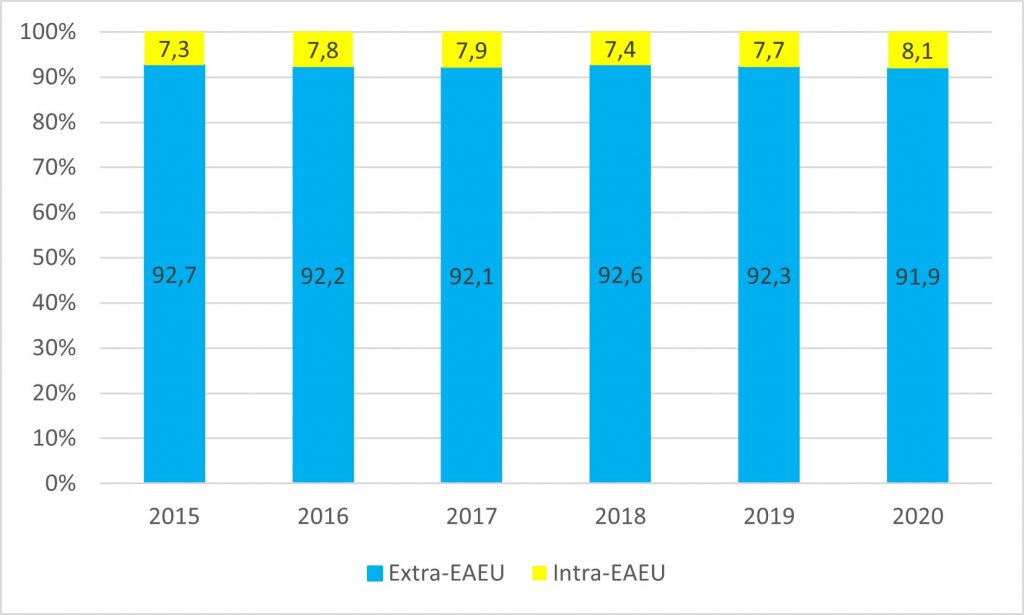 Source: Compiled by the author based on data by the Eurasian Economic Commission.[2]

Currently, the EAEU and its governing body, represented by the Eurasian Economic Commission, are pursuing a policy of liberalizing mutual trade in goods through the continued removal of NTBs and accompanied by the assistance of industrial corporation and import substitution.

Of course, it is necessary to continue this policy in all three aspects. Nevertheless, the author has repeatedly expressed the opinion that the EAEU should more actively jointly promote a supranational export strategy aimed at promoting its products to the markets of third parties.[3]

There are at least two arguments in favour of this logic. First, with a total population of 180 million people, the EAEU is certainly not a small market. Nevertheless, the largely overlapping structures of the member states’ economies and the relatively low purchasing power of the population limit the welfare effect(iveness) of this import substitution approach. Secondly, all successful historical examples of economic modernization, both of Western and non-Western economies, have been based on export promotion strategies.[4] The first and second arguments are based on the theory of comparative advantage in world trade.

Despite its youth, the EAEU can already show a set of preferential trade agreements with a set of third countries. There are free trade zones with Vietnam, Serbia and Iran, an agreement signed with Singapore, and there is a framework agreement on trade and economic cooperation with China.

Nevertheless, according to the author’s opinion, the EEC should revise its foreign trade doctrine in favour of an export-oriented model and intensify work on the creation of a global network of free trade areas.

A number of factors would help in the implementation of such an agenda: First, the EEC is already actively negotiating on trade and economic cooperation with a number of third parties (Tab. 1). Memorandums have been signed with some of them. Secondly, the economies of the EAEU are distinguished by not too expensive, but sufficiently highly qualified personnel, which can give a price and quality advantage for promoting their export products in developing and emerging markets. Thirdly, for political reasons, Russia and the Eurasian Economic Union have rather good and constructive relations with many of the above-mentioned markets in the so-called. “non-Western world”, for example, with Syria, CAR and Cuba. It would be worth extracting foreign economic “rent” from this accumulated geopolitical “capital”. This would also follow the idea of creating a “Greater Eurasian Partnership”.[5]

Therefore, the aim of this study is to estimate the potential trade and welfare effects of a global free trade initiative by the Eurasian Economic Commission.

As candidates for this global free trade initiative the author chose those countries and trading blocs with which the EEC has already implented or is already actively negotiating on foreign trade cooperation and with which, according to news and expert assessments, the conclusion of agreements on an FTA has the greatest prospect of success (Tab 1.).

To do this, the author will use a gravity trade model first developed by Anderson (1979),[6] and further augmented by Santos, Silva et Tenrenyo (2006)[7] on consistency with heteroskedasticity and accounting for zero trade flows; by Fally (2015)[8] on using fixed effects to match multilateral resistances consistent with structural terms; and by Anderson, Larch et Yotov (2015)[9] on using Poisson pseudo-maximum likelihood estimation (PPML). The latter also introduced a three-step estimation procedure with a baseline scenario, a counterfactual scenario, and a full endowment general equilibrium, – all of which will be applied in this simulation.

For the purposes of this model, the author constructed a new database, which includes data on bilateral manufactured goods trade flows for 169 countries in the year 2015, on bilateral population-weighted distance, a contiguity dummy, a common currency dummy, a dummy for being in a free trade area, and a dummy for being in a customs union based on four different datasets provided by the WTO,[10] the CEPII,[11] the United States International Trade Commission,[12]  and De Sousa (2014)[13] (Formula 1):

The counterfactual scenarios are implemented by setting the respective FTA dummies for the analysed countries from zero to one.

One baseline scenario (status quo of trade flows) and two counterfactual scenarios were defined: Firstly, where the Eurasian Economic Union creates a global network of free trade areas with 69 countries. This includes cooperation on a region-to-country basis, as well as on a region-to-region approach with the African Union, Mercosur, and ASEAN. The first scenario also includes those countries with which the EAEU has already implemented an FTA by 2021 (Tab 1.). The second scenario is the same as the first one, but excludes those countries, the EAEU has already implemented an FTA with by 2021. This is done to single out the trade and welfare effects of the new potentials free trade agreements, which are not in place by 2021.

As a result, this free trade initiative would increase the gross domestic product of the Eurasian Economic Union by 1.4 percent. The GDP of Armenia would increase by 1 percent, that of Belarus by 2.5 percent, of Kazakhstan by 1.6 percent and of Russia by 1.3 percent. The Kyrgyz Republic would gain the most from such a free trade initiative, which will increase its GDP by 4 percent.

If the EAEU were to realize such a global free trade network, it would make every Armenian richer by 47 USD per year, every Belarussian by 168 USD, every Kazakhstani by 184 USD, every Kyrgyz citizen by 45 USD and make every Russian citizen almost 160 USD richer yearly.

Of course, goods trade liberalization with the Eurasian Economic Union would also have a positive economic effect on the involved third parties. For example, having an FTA with the EAEU would increase the GDP of Jordan, Tunisia, Botswana, Thailand by 0.2 percent, that of Mongolia, Azerbaijan, South Africa and China by 0.1 percent.

Eastern European countries, such as the Baltic states and Ukraine, which have opted for European integration would lose the most from not participating in the EAEU’s free trade initiative: their gross domestic product would decrease by 0.1 percent.

Using a trade gravity and multi-equilibrium model, this study shows that the adoption of an export-oriented model and the implantation of a global network of free trade areas would be the right choice, since it would significantly raise the level of well-being and economic potential of the member states of the Eurasian Economic Union.