Several major stock market indices, starting with the Dow Jones and the Nasdaq , are stealing from record to record as the global economy experienced its worst post-war recession in 2020 and the prospects for recovery appear uneven and uncertain.

In a report published in September 2020, the Bank for International Settlements (BIS), an institution that plays the role of central bank for central banks, was concerned about this rebound in financial markets “at odds with the general economic outlook. “

How to explain such a gap? Should this be seen as an aberration linked to pure speculation, a manipulation skilfully orchestrated by an “invisible hand” or despite everything a certain logic?

Offset in the time horizon

It is actually quite natural to observe a certain gap between the real economy and the financial markets because each of these spheres has its own time horizon .

The characteristic of financial markets is to live permanently in anticipation while the indicators of the state of health of the real economy are taken at time T from past data.

Thus, for example, the US GDP for the 1st quarter will only be known one month after the end of the quarter and will be the subject of one or even two revisions in the following two months.

For their part, the financial markets are reasoning with a horizon of at least six months.

To take the example of US GDP, the figure released on 14 April 2021 reflects the level of economic activity at the start of the year. However, financial analysts have in mind the level of activity at the end of October – beginning of November, that is to say a difference of the order of eight and a half months, if we position ourselves in the middle of the 1st quarter.

Today, the real economy continues to offer economic data in an environment marked by the effects of the pandemic while financial markets are already projecting themselves into the post-Covid-19 world.

This time lag may partially explain the disconnection .

Nevertheless, by its unprecedented scale, it continues to amaze and perplex many observers, who are even aware of financial questions.

The key role of central banks

Of the main factors at the origin of the disconnection between the financial markets and the real economy, it is undoubtedly, by far, the role played by the central banks which will have been the most decisive.

On the one hand, by keeping interest rates at a deliberately low level, central banks encourage investors to abandon passbooks and other savings accounts with almost zero interest in order to move towards more profitable investments but also more risky.

On the other hand, financial analysts when they need to make earnings estimates for listed companies will discount future earnings at the market interest rate .

The lower it will be, the higher the valuation of the company will be. 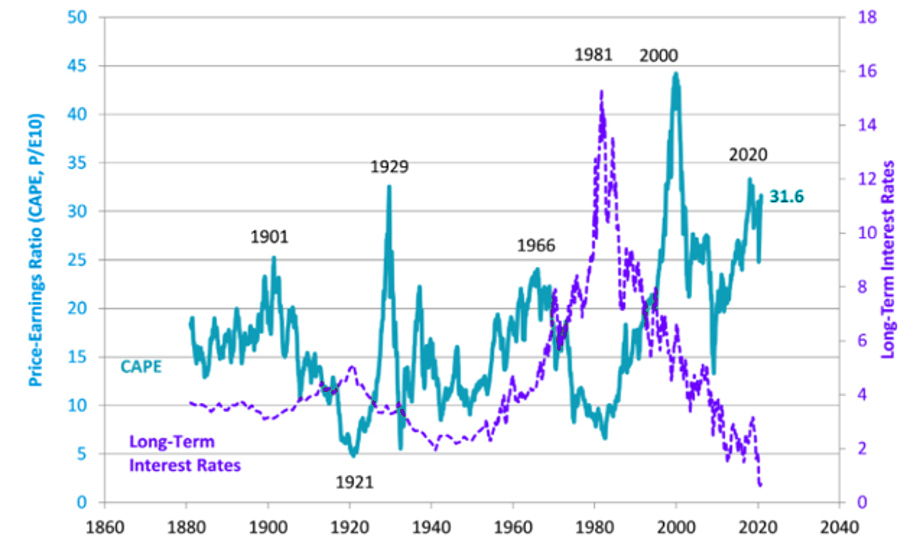 Figure 1 above shows the high price of US equities (in blue) which, in absolute terms, is close to the valuation levels reached in 1929, but the unparalleled fall in interest rates (in purple) keeps it up for the moment this fragile balance. The same is true in the credit markets.

Through their policy of systematic support at any price , within the framework of “  Quantitative Easing  ”, the name given to the central banks’ purchasing program for bonds, in particular those issued by increasingly indebted States, central banks have kept companies alive that otherwise would have defaulted on their loans.

They have also made it possible to narrow the interest rate spreads between good and bad bond risks, a source of future disillusionment.

Individual or institutional investors in search of yield (insurance companies, pension funds, etc.), have had no choice but to invest in bond issues of lower quality.

Despite some isolated statements about the need for a return to the normalization of monetary policies, the governors of the main central banks continue to say that they will leave the most flexible financing conditions possible, at least two more years, as they are. have been since the start of the health crisis ( Figure 2). 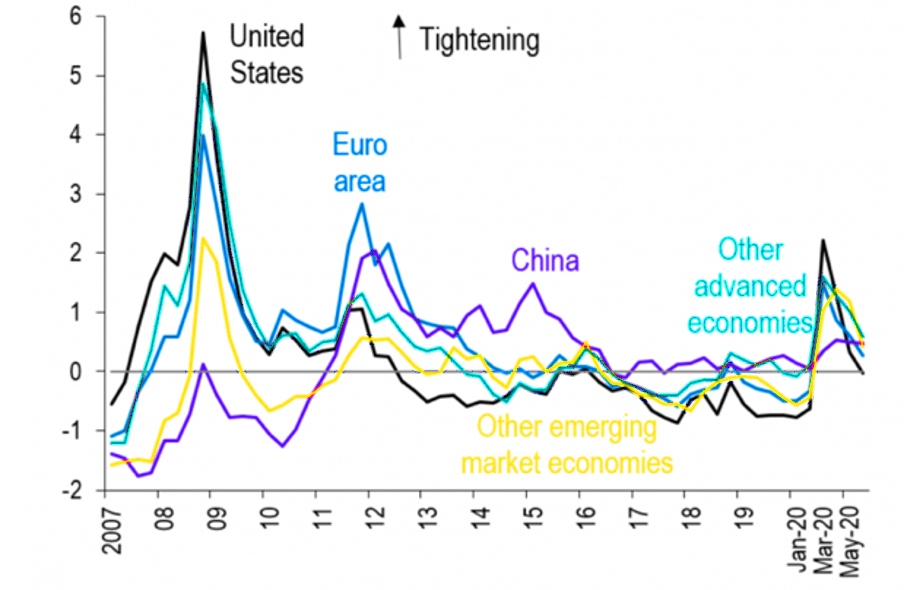 After the big plunge of the main international stock markets in March-April 2020, the rebound has been spectacular, with most indices recovering less than a year after their pre-Covid level and, in the case of the United States, surpassing them widely.

Paradoxically, this outperformance of risky assets occurred in weakened economies, already before the health crisis, by very high levels of debt affecting all economic players.

Conversely, it must also be recognized that the results of many companies on both sides of the Atlantic have been much higher than expected. This is the major determinant of the evolution of equities against the backdrop of the “V” shaped recovery of the main economies, led by the United States and China.

Unlike the financial crisis of 2008, the economic shutdown was immediate and temporary. In the United States, the ISM manufacturing index, which reflects the morale of purchasing managers in companies, is considered a leading indicator of the economy. However, this reliable barometer of the confidence of the industrial world had passed the crucial bar by 50 percent as of June 2020

Are the major indices like the American S&P 500 or the Eurostoxx 50 for the euro zone or the CAC 40 for France good mirrors of their underlying economies  ? In other words, can the 40 largest French companies, which for the most part generate more than 80 percent of their turnover abroad, can they be considered as representative of the French economy?

In addition, from a strictly methodological point of view, most indices are constructed according to the weight of the market capitalizations of their members. Thus, very naturally, a company in a promising sector will amplify its positive contribution to the performance of the index. Conversely, declining sectors, such as banks or oil companies, will have less and less impact.

In the United States, the shutdown of the economy has not only made people unhappy . Some large companies like Amazon or Netflix have even, in reality, taken advantage of the health crisis to increase their market share and experience unprecedented development.

The weight of the famous GAFAMs (Google, Amazon, Facebook, Apple and Microsoft) alone represents more than 20 percent of the Standard & Poor’s 500, the index of the top 500 stock market capitalisations across the Atlantic. These companies have benefited from the acceleration of the digitalization of the economy, already in formation for several years.

At the same time, entire sectors of activity, such as transport, tourism and leisure, have been brought to a halt and their stock market underperformance has been as spectacular as has been the rise of the technology and retail sectors. remote services.

Beyond the disconnection between the real economy and the financial markets, we are witnessing within the latter growing gaps between winners and losers.

Sources of reconnection between the real economy and the financial markets

Aware of this exaggerated disconnection that they have caused to avoid the worst, that is to say the economic explosion and the systemic risk, political and monetary authorities will sooner or later have to apply the brakes without causing a sudden stop or even the crash of a number of passengers aboard the global economy.

Here and there we see statements from economic or monetary officials suggesting that we cannot let debts and deficits slip away indefinitely. In the euro zone where some countries such as Italy and France have seen the debt burden reach 130 percent and 120 percent of GDP respectively, the stability criteria of the Maastricht Treaty seem well and truly buried .

However, we know that we will not be able to draw indefinitely from the State coffers that have already been empty for a long time.

The spectacular rise in prices is not just affecting stocks and bonds, but also commodities.

Driven by sharply rebounding demand from China, the prices of a large number of commodities have soared. It is true, however, that like oil prices, they came from relatively depressed levels. But it is perhaps also through them that the reconnection will be done.

This sharp increase, boosted by the recovery of the most dynamic economies like that of China and the United States, risks triggering a slowdown in growth, justifying possible corrections in stock market valuations. Likewise, the surge in oil prices could help end the disinflationary cycle that began more than 30 years ago, or even rekindle inflationary fears leading central banks to curb their lax monetary policies.

Among the factors that could cause a normalization of the relationship between financial markets and the real economy, we cannot exclude the hypothesis of an exogenous shock in a particularly unstable world. This type of shock, completely escaping the political and monetary authorities, could cause a violent correction in the markets.

It could be geopolitical, as we know, where tensions across the hot spots of the globe are not lacking. But it could be endogenous, we perhaps know less, that is to say within the financial sphere. If only since the beginning of 2021, we have seen two cases make financial headlines on Wall Street.

The former were organized around the Robinhood digital platform (“Robin Hood”), a symbol, and the latter, large speculative investment funds used to betting on the decline of a share. But in this incredible showdown, it is the small carriers who will propel the stock in two weeks from USD 25 to USD 330, i.e. a tenfold increase in value and an increase of more than 3300 percent over one year, leading to bankruptcy. of the Melvin hedge fund for more than USD 2 billion.

As we can see, the sums handled by certain hedge fund managers can lead to a series of bankruptcies which, through a domino effect, could cause a crash in the financial markets.

Finally, finance is faced with the threat hanging over the so-called high-yield or “junk bond” credit market , that of low-quality credit signatures [1] and which we know to be particularly illiquid.

As we have seen, this segment of the bond market is particularly expensive and does not reflect the fundamentals of the issuers participating in it. The day when too many investors want to go out and at the same time, the door may be too narrow. Just as the world is not immune to a geopolitical crash, so we are not immune to a financial crash either.

We can therefore identify several explanatory factors for the recent accentuation of the disconnection between the financial markets and the real economy, these two spheres having shifted time horizons.

On the one hand, equity indices whose representativeness can be called into question, on the other, with regard to interest rates, a bubble orchestrated with skill by the large central banks and their unconventional support measures .

How long can the bubble last without bursting? Undoubtedly as long as the central banks are in the maneuver but especially that the investors will give them credit.

Will they be able to indefinitely reproduce Mario Draghi’s bluff and his famous “whatever it takes” from 2012 to curb any speculation on Italy’s exit from the euro zone?

The day when confidence dissipates, we could witness the collapse of the bond markets as well as the depreciation of certain currencies, or even the bursting of large currency areas.

Reconnecting financial markets to the real economy is therefore likely to be anything but painless.

[1] Bonds issued by companies are subject to a rating or rating from major international rating agencies such as Standard & Poor & s, Moodys or Fitch. The notes go from AAA to C or even D as default. From AAA to BBB- this is considered a very fair “risk” or “investment grade”. Below this it becomes risky non-investment grade to very risky or even “junk”, ie with a high probability of default.

*Translated from the original on CAP ISSEP.