From April 1st to 3rd, the Spring Academy 2022 of the Young Alternative took place in Erfurt, Thuringia, in which Yuri Kofner, MIWI economist, took part.

On the morning of April 2, the activists and young politicians of the German liberal-patriotic camp discussed with MdEUP Dr. Maximilian Krah, ID parliamentary group in the European Parliament, on “Germany’s role in Europe” and whether “the Dexit makes sense as a last resort”.

In the opinion of the participants, the AfD must free itself from the negative Dexit framing and work towards a positive concept of a joint renewal of Europe based on freedom and identity (cultural) values. These values ​​were to be built upon “three hills”: the Acropolis, Golgotha, and the Capitol.

This “Renovatio Europae” can only be implemented on the basis of close cooperation between the right-wing democratic parties in Europe.[1]

According to Krah, German and European patriots must recognize that their goal is a free, sovereign and strong Europe within the framework of a multipolar world order. 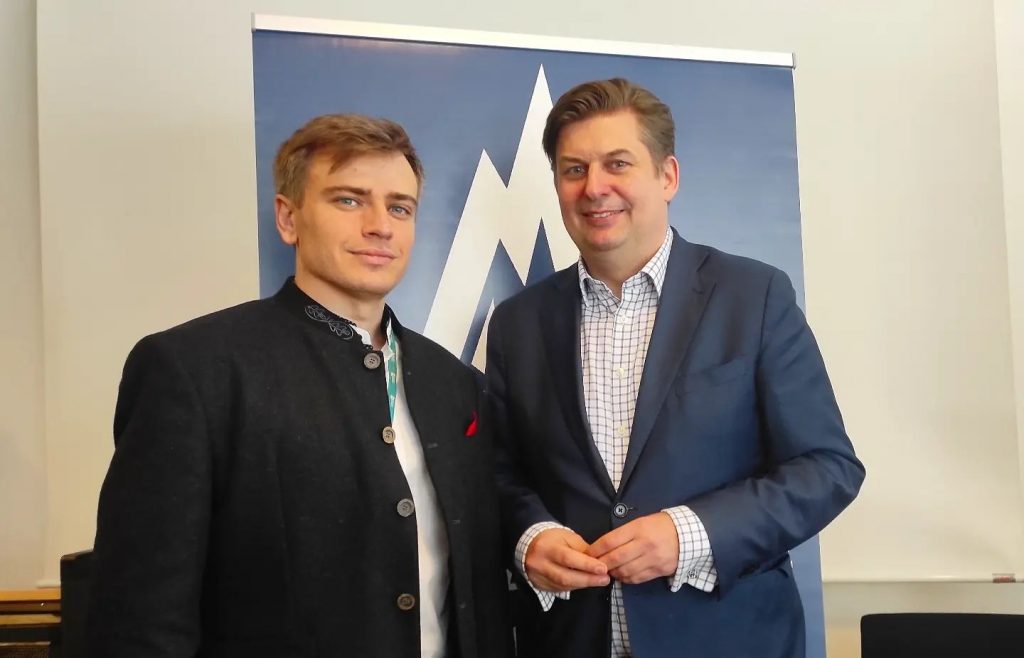 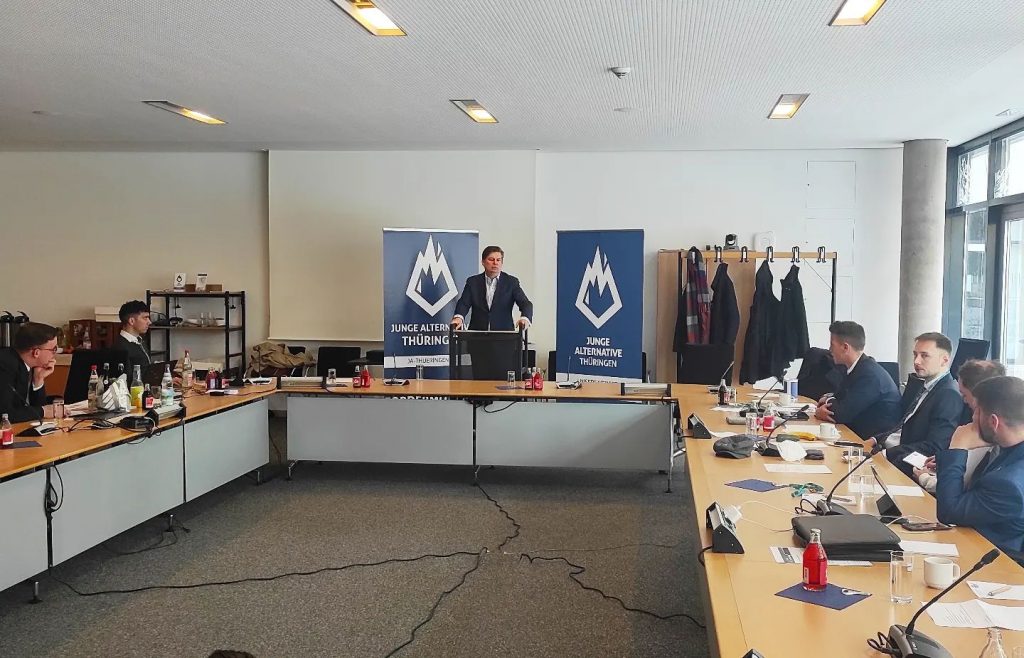 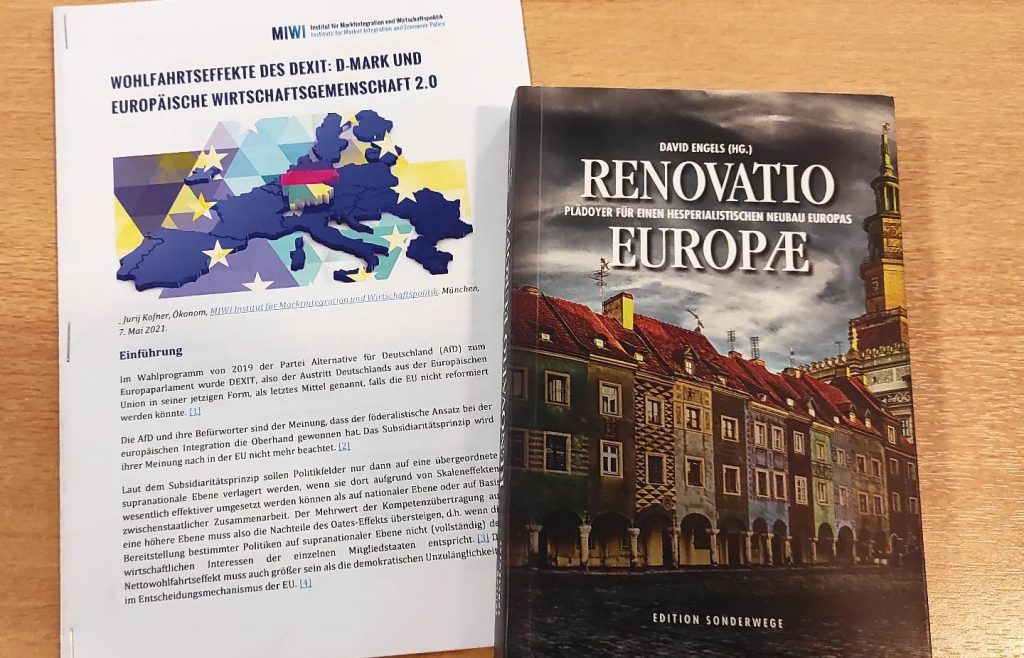 In the afternoon, Mr. Kofner gave a lecture with the provocative title “Alternative climate policy and CO2 abatement from a conservative perspective”.

In his introduction, the MIWI researcher differentiated between conservative environmental protection, which is concrete and tied to home, and was originally critical of technology,[2] on the one hand, and left-wing climate protection, which is abstract, globalistic and supposedly innovative, on the other hand.

This was followed by a distinction between the anthropogenic and natural explanations of climate change. According to the ARD Deutschlandtrend from summer 2021, 83 percent of German citizens share the former view and only 16 percent tend towards the latter.[3]

Yet many credible studies show that extreme weather events have decreased worldwide in recent decades, or that their economic costs have fallen relative to GDP: from 0.26 percent of global GDP in 1990 to 0.18 percent in 2019.[4] The global number of “climate-related” deaths fell by 99 percent between 1920 and 2020.[5]

In the debate about climate change, the potential positive effects are hardly taken into account, noted Kofner. These will primarily be felt in the northern hemisphere, e.g. the opening of the Northern Sea Route due to the melting of the Arctic ice will increase German GDP by 0.3 percent.[6] The CO₂ fertilization effect will increase agricultural yields and thus Germany’s GDP by 0.1 percent.[7]

Kofner sharply criticized the current German climate policy with the primacy aim of CO₂ reduction, as it is “nationalistic”, i.e. a large part of the global socio-economic costs are borne by the domestic economy; technology-critical, recognizable by the nuclear phase-out and the de facto ban on the internal combustion engine; as well as a planned economy approach, visible in the many quotas, subsidies, taxonomies, interventions, tariffs (CBAM) and misappropriated monetary policy “for the sake of climate protection”.[8]

The economist then went into the “Green Paradox” of the former ifo boss Hans-Werner Sinn. Accordingly, a unilateral decline in European demand for hydrocarbons, ceteris paribus, only lowers their price on the world market. As a result, countries that do not participate in Western CO2 abatement policies can afford more fossil fuels, which ultimately does not reduce global CO₂ emissions, but potentially even increases them.[9]

Even in the “worst case scenario” the economic costs of climate change are manageable: according to the 2018 IPCC report, they will reach only 2.6 percent of global GDP in 2100.[10] Meta-studies by climate economists William Nordhaus and Björn Lomborg assume a 3.6 percent reduction of global GDP by 2100.[11] So, in any case, this is not a doomsday scenario, as many green activists claim.

At the end of the lecture, Mr. Kofner presented what an AfD-related climate policy could look like, e.g. as a compromise within the framework of a future governing coalition or in order to be elected by more than 16 percent of the citizens in regard to this topic in the medium term: First, the primacy should be on adaptation and the promotion of research and development of new technologies (innodaption). 2. Secondly, the domestic energy and climate policy should be technology-neutral, which would be expressed, among other things, in a continuation of German nuclear power and in research on synthetic fuels. And if one really would want to reduce CO₂ emissions, then this should be done only in two ways: 3. Globally, i.e. via a fair international distribution of the socio-economic burden, above all since this would be more efficient, e.g. the abatement costs of a ton of CO₂ are 16 times lower in China than in Germany. 4.  Based on a market economy approach, e.g. as part of a global emissions trading system or with the help of an international climate fund, as suggested by economist Ulrich van Suntum.[12] 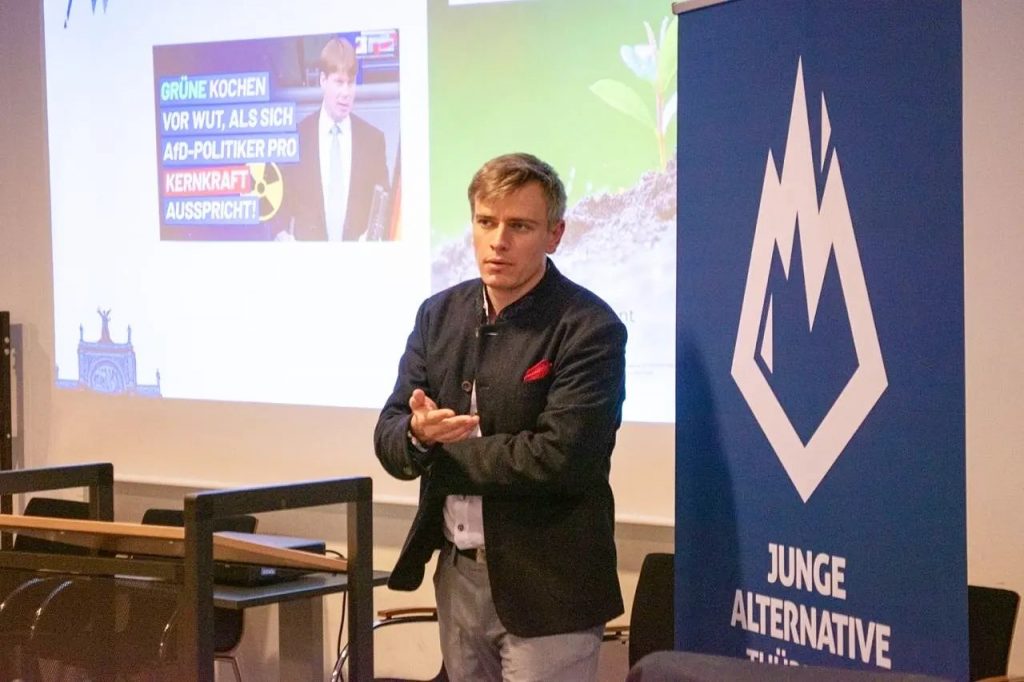 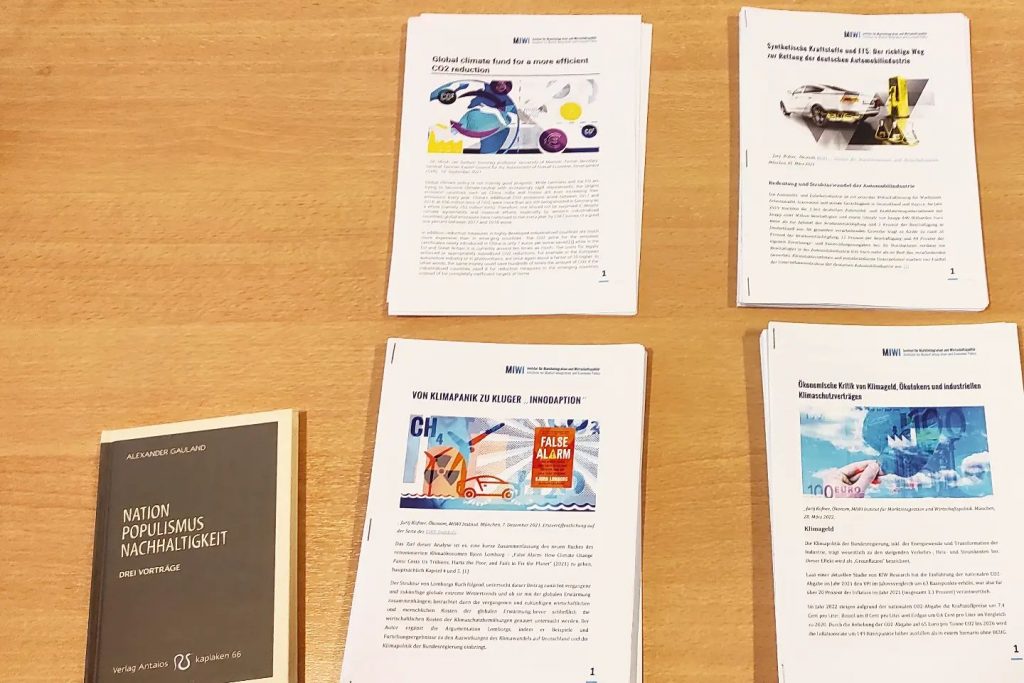 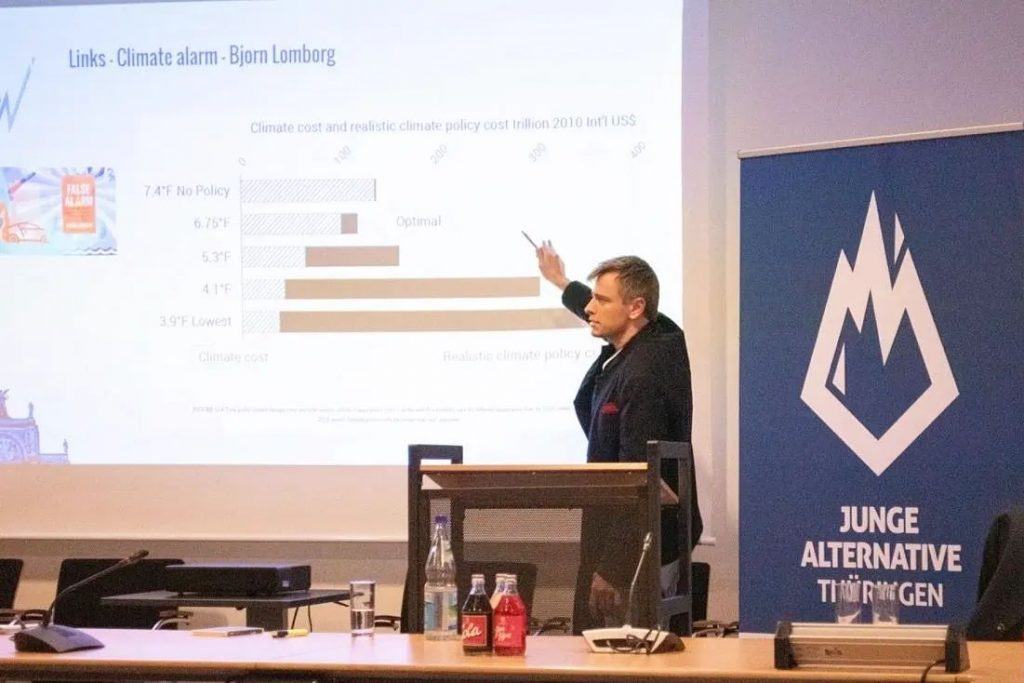 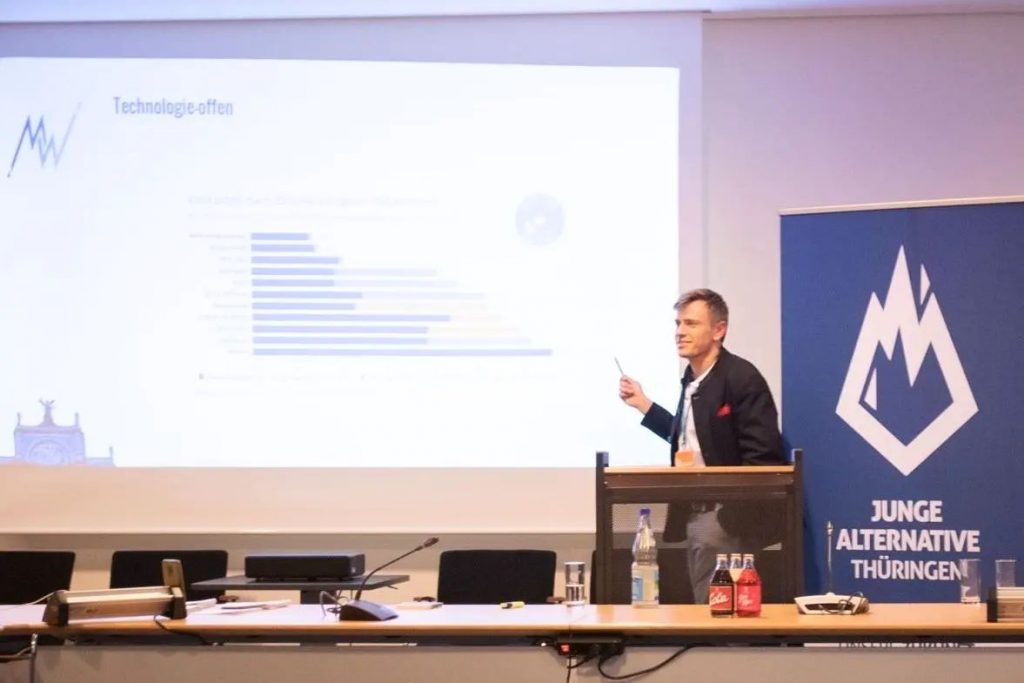 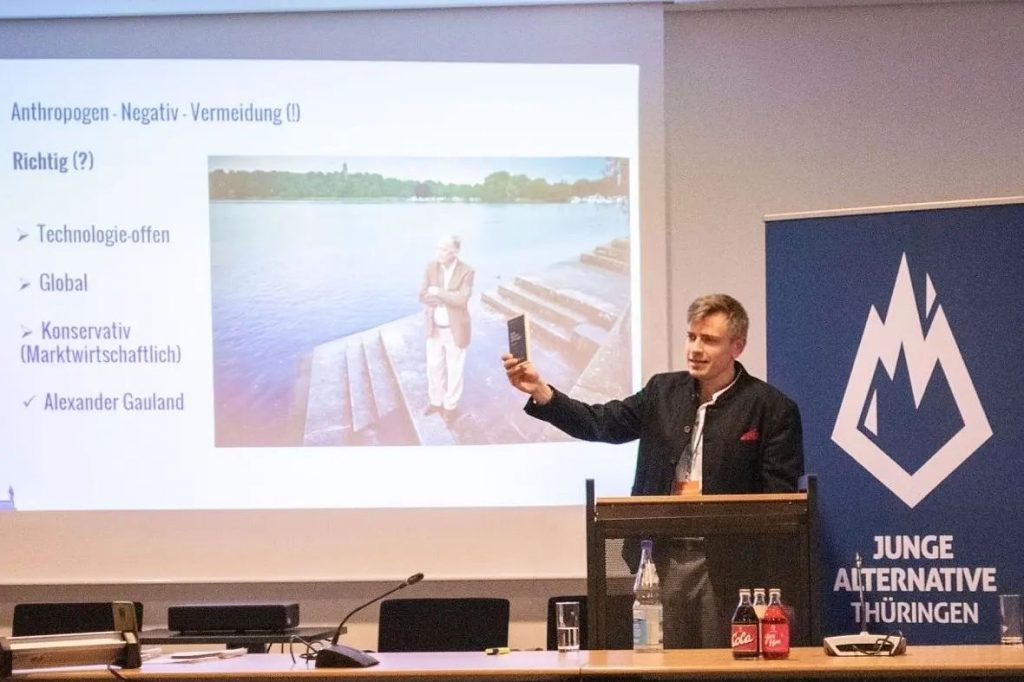 [4] Pielke R. (2019). Tracking progress on the economic costs of disasters under the indicators of the sustainable development goals. Environmental Hazards. URL: https://www.tandfonline.com/doi/full/10.1080/17477891.2018.1540343?casa_token=iAX4L3HIbCYAAAAA%3ARfgc4uVGaDWvBZNV0QS1sD7Ogis2K8BHIl3FCOAAS10AVWVmNLzz8-2LdIp9GSwW2afiQGjIvpQKNQ

[10] IPCC (2018). Global Warming of 1.5°C. An IPCC Special Report on the impacts of global warming of 1.5°C above pre-industrial levels and related global greenhouse gas emission pathways, in the context of strengthening the global response to the threat of climate change, sustainable development, and efforts to eradicate poverty. World Meteorological Organization. URL: https://www.ipcc.ch/sr15/