Debt ratios of EMU member states, which were already high in some cases, have increased significantly during the pandemic. This analytical note argues that the current review of the European fiscal framework should not only discuss the design of the framework, but also how to strengthen enforcement and increase compliance with the fiscal rules. Increasing the political costs of non-compliance – through a reduction of complexity of the framework, an increase in national ownership and transparency, as well as simplicity of assessment – could help achieve this. Adding more flexibility, exceptions, and discretionary judgement would be counterproductive.

Debt ratios of the member states of the Economic and Monetary Union (EMU), which were already high in some member states, have increased significantly during the coronavirus pandemic (Figure 1). They are likely to increase further in light of governments’ reactions to the Ukraine war and increasing consumer prices. This aggravates the challenge for EMU to reduce debt ratios and ensure sustainability of public finances, while not impeding growth and successfully coping with climate change, demographic shifts, and digitalisation.

In a monetary union with common monetary policy and decentralised fiscal policy, the sustainability of public finances of each member state is essential, as otherwise a sovereign debt crisis can emerge or, in order to prevent such a crisis, the central bank may be forced to engage in monetary financing, running the risk of creating excessive inflation. To prevent both outcomes, the monetary union can either establish a central fiscal authority with significant competencies and resources, or it ensures sustainability of member states’ public finances by other means, for example, through effective fiscal rules.

Currently, the EU does not have a significant central fiscal authority. Even with Next GenerationEU, its budget is only 2 percent of GDP and budgetary autonomy remains in the hands of member states’ parliaments. Thus, the approach chosen by EMU has been to formulate common fiscal rules. The idea is to not restrict fiscal policy in times of crisis, when a strong fiscal reaction is necessary, but, especially in good times, to bring down debt ratios and build up fiscal buffers. The discussion about borrowing at no cost with interest rates lower than GDP growth rates (Blanchard 2019) does not relieve the need to consolidate public finances in Europe. Refinancing conditions can shift quickly if markets lose faith in the credibility of governments’ willingness and ability to service their debt. Moreover, high-debt countries can lose more output in a crisis, have less scope for countercyclical fiscal policies, and have lower potential (long-run) output (Burriel et al. 2020).

During the years before the pandemic, which were characterised by relatively good economic conditions, debt ratios remained high in already highly indebted member states (Figure 1). An essential goal of the current review of the European fiscal framework thus must be to design a framework that successfully reduces debt ratios in good economic times in particular. Grootjes and De Haan (2022) and Larch et al. (2020) provide evidence that (compliance with) fiscal rules can also counteract the procyclicality of fiscal policy in such times. 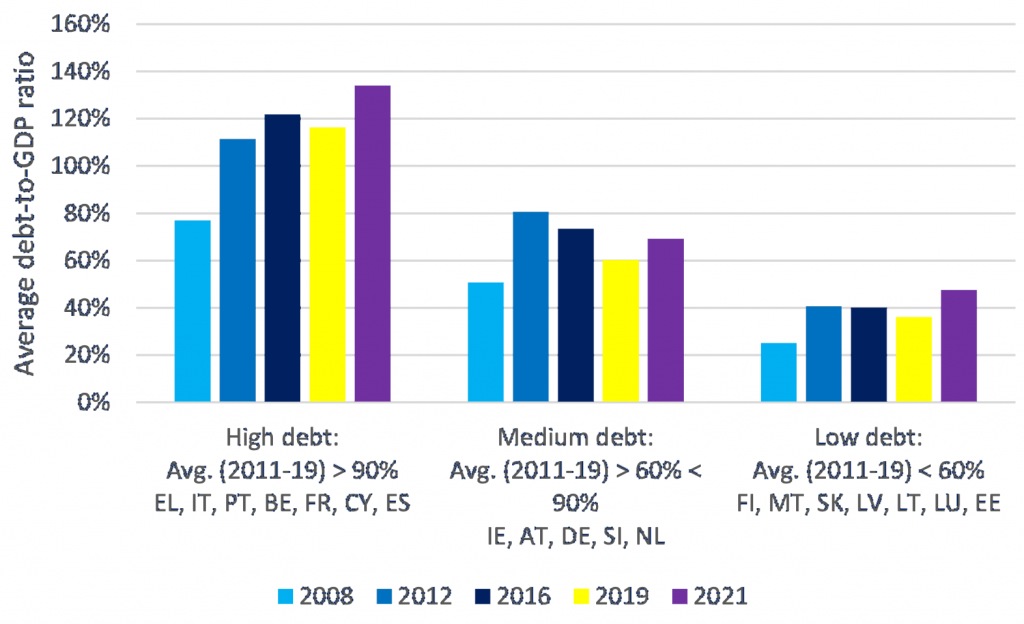 Effectiveness of the current framework

The European Commission assesses ex-ante draft budgetary plans of member states in the autumn of each year. Between 2014 and 2019, it found a large fraction of the plans submitted by highly indebted member states to be at risk of non-compliance with the requirements of the Stability and Growth Pact (SGP) (left panel of Figure 2). Countries were then asked to change their fiscal plans in order to comply with the SGP, assessed ex-post by the Commission in the spring if the next year. Between 2014 and 2018 the Commission identified ex-post only one instance of significant deviation or non-compliance (right panel of Figure 2). In 2019, a larger number of countries were attested a “significant deviation”, but without any consequences due to the pandemic-related activation of the general escape clause one year later. Still, this evidence rejects the contention that member states continuously break the rules, at least as compliance is assessed in the current framework.

While the overall assessment of the Commission might state that a member state complied with the rules of the SGP, this “legal compliance” does not necessarily correspond to “numerical compliance”. The Commission exhibits a high degree of flexibility, including exceptions, escape clauses, weighing of various rules, room for interpretation, and areas of discretionary judgement.

The Secretariat of the European Fiscal Board (Larch and Santacroce 2020) has published data on “numerical compliance”, measuring compliance of ex-post fiscal data with core numerical provisions of the fiscal rules. It shows that numerical compliance with the rules of the SGP is much lower than legal compliance assessed by the Commission (left panel of Figure 3). A clear pattern of compliance with the rules enshrined in the Treaty – i.e. the debt rule and deficit rule – is visible, with low-debt countries complying with those rules virtually always and high debt countries much less. For the newer expenditure and structural balance rule, compliance seems generally lower and no particular pattern emerges with respect to member states’ average indebtedness. Observed numerical compliance was not much higher for high debt countries – 17 percent for debt, 77 percent for deficit and 33 percent for expenditure and structural balance rules – if we look only at economically better years (i.e. years with real GDP growth above the 2000-2019 average).

Sources: Larch and Santacroce (2020); AMECO. Note: * As the output gap can be prone to large revisions especially at the margin, we show the years where real GDP growth was above the average real GDP growth (2000-2019).

The enforcement of rules is an inherent problem in a decentralised union of member states without a central authority with respective competencies. The incentives for member states to enforce fiscal adjustments or impose sanctions against other member states are low to non-existent. Without transferring significant competencies to the EU level, there could be two avenues to strengthen enforcement: increasing political costs of non-compliance and more automatism.

While governments might not punish each other for not complying with fiscal rules, the national electorate might. Compliance could be enforced through higher political costs of non-compliance. For this mechanism to work, compliance with the rules needs to be easy to assess for the electorate. There are different levers that simultaneously can contribute to that:

First, a higher level of transparency of public finances and increased media attention. Strong and independent fiscal institutions can increase transparency and explain compliance as well as the current fiscal and economic environment (Beetsma and Debrun 2018, Burret and Feld 2018, Eyraud et al. 2018). Provisions that increase public awareness like ‘comply or explain’ requirements can also help.

Second, national ownership (Debrun and Reuter 2022). Government’s ability to blame non-compliance on external factors or ‘remote experts in Brussels’ would need to be limited. If rules are part of national legislation and assessed nationally, it is harder for governments to find external scapegoats.

Third, the focus of the overall framework. The current framework is too complex with different fiscal rules at work at the EU level and additional rules at the national level. Even for experts, it is close to impossible to judge overall compliance in this complex web of rules.

Fourth, simplicity of rules. To increase the political costs of non-compliance, judgement needs to be more easily possible. Complex calculations, many exceptions, or discretionary judgements to assess compliance counteract that, and even more so frameworks that try to maximise the flexibility of the European Commission – for example, along the lines of Blanchard et al. (2021), who propose replacing the fiscal rules with expert-based, country-specific assessments and debt-sustainability analysis. Too much flexibility is counterproductive.

Furthermore, a less complex framework with less flexibility and discretionary judgement is a necessary prerequisite for more automatism (for example, through automatic correction mechanisms). The final framework will most probably not be able to make maximum use of each of the levers, such that it should strive as far as possible for each of them and rely on the effect of their combination.

Besides enforcement and compliance, any reform also needs to address the focus and the design of the specific rules of the framework. Thereby the basic principles are independent of the overall framework – for example, how much simplicity or national ownership is possible. When selecting a single fiscal rule on which the fiscal framework should be focused, a trade-off emerges. While a basic deficit rule is very simple, transparent and easy to calculate, it is clearly procyclical and may not help to reduce indebtedness in good times. A structural balance rule is countercyclical, but less transparent and needs a variety of assumptions and calculations, which are often afflicted with problems. The identification of economically good and bad times in real time is especially challenging. An expenditure rule might be able to balance those requirements. Not without reason, many reform proposals entail different forms of such an expenditure rule (e.g. Christofzik et al. 2018, Eyraud et al. 2018, EFB 2020).

However, as seen above, not every design of an expenditure rule guarantees a reliable reduction of debt ratios in good economic times. The initial conditions (Eyraud et al. 2018) and revisions of potential output (Larch et al. 2022) in particular play an important role. Thus, it will be important to link the limit on expenditure growth to debt ratios and to the medium-term development of the structural balance. We proposed a possible implementation of such a link in Christofzik et al. (2018). Furthermore, when implementing such a rule, the numerical calibration of the rules will have a major role to play.

In this context, the current debate often criticises fiscal rules for compressing public investment, thus calling for exceptions for investment or ‘green’ expenditures. As the rules are introduced in the first place to guarantee debt sustainability, such exceptions would consequently require a corresponding reduction of the limit for other expenditures. Nothing is gained if such exceptions are a means to allow for higher deficits and debt ratios, and there is only weak empirical evidence that well-designed fiscal rules actually reduce investment expenditures in advanced economies (e.g. Basdevant et al. 2020, Reuter 2020). Furthermore, clearly defining the expenditures which should be exempt will be difficult. Even in the area of green investment, member states have very heterogeneous starting positions; while some might want more investment in grids and electricity, others instead want subsidies for companies, and still others a higher compensation for households. With fiscal policy remaining decentralised, it seems inconsistent that there should be a supranational requirement on the composition of public finances.

A reform of the EU fiscal framework should ensure a reduction of debt-to-GDP ratios in high-debt countries in economic upswings. Reforms that counteract this aim should be avoided. Enforcement of fiscal rules needs to be strengthened and compliance increased, especially through increasing political costs of non-compliance. A reduction of the complexity of the framework, an increase in national ownership, and the degree of transparency and simplicity of assessment can work in combination towards that. Adding flexibility to an already flexible set of fiscal rules – for example, with exceptions for green investment – would be counterproductive.

Given the difficulties of highly indebted countries to comply with the 1/20 rule, a less ambitious reform would instead increase flexibility by allowing member states with debt ratios above 100 percent to reduce them by less than the current 1/20 rule requires (e.g. by using an escape clause). If such an increase of flexibility cannot be avoided, it should go hand in hand with more credible measures to increase compliance and reduce debt ratios.

Grootjes, B and J De Haan (2022), “Procyclicality of Fiscal Policy in European Union Countries”, Journal of International Money and Finance 120: 102276.

Larch, M and S Santacroce (2020), “Numerical Compliance with EU Fiscal Rules: The Compliance Database of the Secretariat of the European Fiscal Board”, May.

Reuter, W H. (2020), “Benefits and Drawbacks of “Expenditure Rule”, as well as of a “Golden Rule”, in the EU Fiscal Framework”, Study requested by the ECON Committee, Brussels.

Authors’ note: This column reflects the personal views of the authors and not necessarily those of the German Council of Economic Experts or the Federal Ministry of Finance.