As fertility rates have declined in high-income countries, the cross-country relationship between women’s labour supply and fertility has reversed. Today, in countries where more women are working, more babies are born. This analytical note suggests that classic models of fertility no longer explain ultra-low fertility rates in high-income countries, where the compatibility of women’s career and family goals are now a key driver of fertility decisions. The authors highlight four factors that facilitate combining a career and childbirth: family policy, cooperative fathers, favourable social norms, and flexible labour markets.

Starting with Becker (1960), economic models of fertility behaviour relied on two main ideas to account for empirical regularities of fertility choice. The first of these is the quantity-quality trade-off: the notion that as people get richer, they invest more in their children’s ‘quality’, in particular by providing them with more education. Given that education is costly, parents choose to have fewer children as incomes rise. The second main idea centred on women’s opportunity cost of time. According to this mechanism, children are more ‘expensive’ when women’s wages are high and many women work, because raising children and working are competing uses of women’s time. Relying on these mechanisms, first-generation models of fertility behaviour were able to account for the empirical regularities that held across a wide set of countries until a few decades ago, particularly the observation that fertility rates were lower in countries that are richer and where many women work.

Figure 1. Total fertility rate and GDP per capita across OECD countries (1980 and 2000)

Figures 1 and 2 show how fertility in high-income countries has changed. In 1980, fertility was still declining in GDP per capita across OECD economies; by 2000, it was the richer countries that had more children. Similarly, Figure 2 shows that in 1980 in the OECD, the countries with the highest female labour-force participation had the lowest fertility rates. By the year 2000, this relationship had reversed – fertility is now highest in countries where many women work.

The compatibility of family and career as a determinant of fertility

The changing empirical regularities of fertility were first noted in the sociology literature (e.g. Rindfuss and Brewster 1996) and discussed in economics starting with the contributions of Ahn and Mira (2002), Del Boca (2002), Apps and Rees (2004), and Feyrer et al. (2008). To account for the new facts of fertility choice in today’s high-income countries, researchers had to consider new mechanisms that go beyond the forces emphasised by first-generation studies. Recent research in economics, demography, and sociology that rises to this challenge has a common theme: the compatibility of women’s career and family plans emerges as a key determinant of fertility behaviour.

The underlying change that links career-family compatibility and fertility decisions is a shift in women’s overall aspirations and life plans. As emphasised in recent work by Claudia Goldin (2020, 2021), in the past most women viewed having a career and having a family as mutually exclusive choices – achieving one of these aims implied making a sacrifice in the other. Today, most women in high-income countries aspire to have both a family and a fulfilling career that spans most of their adult life. This aspiration reflects what has been the reality for most men in high-income countries for a long time; hence the shift in women’s aspirations reflects a convergence in women’s and men’s overall life plans.

According to the new fertility literature, the desire to have both a career and a family matters for fertility outcomes because there is significant variation across countries in how compatible these two aims actually are. In countries where it is easy to combine career and family, women have both; in countries where the two are in conflict, women are forced to make compromises, leading to both fewer children being born and fewer women working.

In our survey, we highlight four factors that facilitate combining a career with a family: family policy, cooperative fathers, favourable social norms, and flexible labour markets.

The biggest challenge in combining a career and family is dealing with childcare needs. If women end up having to provide most of the childcare on their own, continuing in a demanding career while having young children will be difficult or impossible. A common alternative mode of childcare is provided by day-care centres and preschools, which can be public or private. If such childcare is widely available, covers all of the working day, and is affordable, women with young children have an easier time continuing to work and might be more likely to have larger families as a result (Del Boca 2002, Apps and Rees 2004).

In line with this intuition, Figure 3 (which is based on Olivetti and Petrongolo 2017) shows that public spending on early childhood education is closely related to both fertility rates and women’s employment across countries. The countries with the lowest total fertility rates (below 1.5) are all in the bottom half of early childhood education spending. Other policies that help determine career-family compatibility include parental leave policies, tax policies, and the length of the school day.

Childcare can also be provided by fathers. Time use data show that until a few decades ago, mothers spent vastly more time on childcare than fathers did, but in many countries, fathers’ contributions have since risen. The division of childcare between parents has a direct impact on fertility decisions if parents bargain on whether to have additional children. Doepke and Kindermann (2019) show that in recent data, couples are likely to have another child only if both partners share the desire to have one. If men contribute little to raising children, women will be less likely to agree to another child, and fertility will be low.

Figure 4, Men’s share of house work and fertility across countries 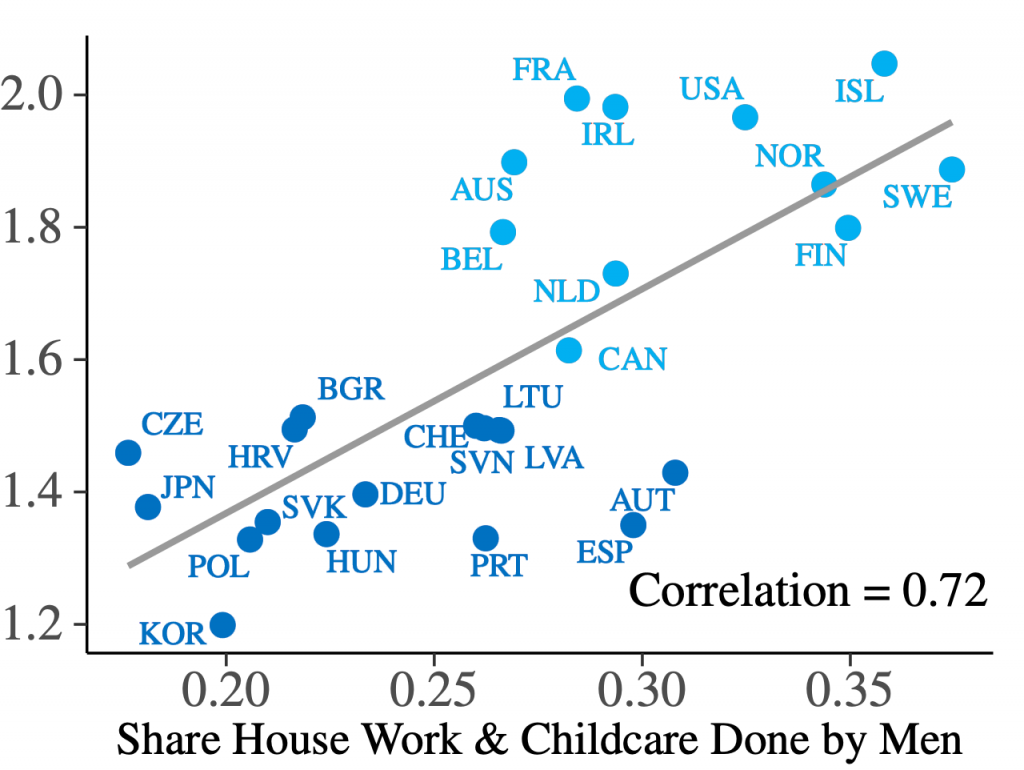 Consistent with this view, Figure 4 displays a strong cross-country correlation between men’s contributions to childcare and housework and the total fertility rate. In all countries with a fertility rate below 1.5 (blue dots), men do less than a third of the work in the home.

The role of intra-household bargaining for fertility implies that deeper determinants of the division of labour in the household matter for fertility rates. These factors include family policy such as paternity leave (Farré and Gonzalez 2019), social norms regarding mothers’ role in the home and the workplace (Myong et al. 2020), and workplace practices such as an expectation of long hours in career positions and the presence (or absence) of flexibility to deal with sudden childcare needs, for example when a child falls ill.

Lastly, the compatibility of career and family also depends on labour market conditions (Del Boca 2002, Adserà 2004, Da Rocha and Fuster 2006). If stable, well-paid jobs are hard to find and unemployment rates are high, parents may be worried that a temporary career interruption following the birth of a child may turn into a permanent one. Having another child is less of a concern when desirable and flexible jobs are easy to find.

For policymakers concerned about ultra-low fertility, the new economics of fertility does not offer easy, immediate solutions. Factors such as social norms and overall labour market conditions change only slowly over time, and even potentially productive policy interventions are likely to have effects that only build gradually over time. Yet, the clear cross-country association of fertility rates with measures of family-career compatibility shows that ultra-low fertility is not an inescapable fate, but a reflection of the policies, institutions, and norms prevalent in a society. New-generation research on how these features determine fertility rates can help point the way to a future that avoids the current trajectory of ever-smaller families and gradually diminishing populations.

Ahn, N and P Mira (2002), “A Note on the Changing Relationship between Fertility and Female Employment Rates in Developed Countries”, Journal of Population Economics 15 (4):667–682.

Del Boca, D (2002), “The Effect of Child Care and Part Time Opportunities on Participation and Fertility Decisions in Italy”, Journal of Population Economics 15 (3): 549–573.

Feyrer, J, B Sacerdote and A D Stern (2008), “Will the Stork Return to Europe and Japan? Understanding Fertility within Developed Nations”, Journal of Economic Perspectives 22 (3): 3–22.

Olivetti, C and B Petrongolo (2017), “The Economic Consequences of Family Policies: Lessons from a Century of Legislation in High-Income Countries”, Journal of Economic Perspectives 31 (1): 205–230.