The recent, coinciding trends of weakening democratic institutions and growing authoritarianism are raising alarm internationally. Haggard and Kaufman (2021) describe sixteen recent cases of democratic backsliding, which they define as “incremental erosion of institutions, rules, and norms that results from the actions of duly elected governments”. Meanwhile, modern authoritarian regimes are developing new tools to retain power, for example shaping information rather than resorting to direct violence (Guriev and Tresiman 2015). These changes have major impacts on everyday life by themselves, but they can also have further reverberations through their impacts on economic activity and the allocation of a country’s resources. The extent to which a country adopts democratic, or autocratic, political institutions can have important consequences for economic growth (see e.g. Acemoglu et al. 2014). Political regimes influence industrial activity through many channels, such as creation and protection of property rights, provision of public goods, regulation of incorporation and corporate liability, and taxation. In particular, autocratic regimes can erect entry barriers to protect the regime’s status, extract rents, or funnel resources to elites. And the autocrat may privilege certain firms connected to the regime or firms important to the regime’s objectives. At the same time, much past research (e.g. La Porta et al. 1998) also identifies legal tradition as a factor in shaping economic development, and researchers continue to debate the relative importance of legal versus political factors.

Historical analysis can shed light on the effects of legal traditions and of diverse political regimes by providing more detailed data and elucidating the long-run evolution of institutions and the economy. Researchers often look to the German and Russian Empires of the late 19th and early 20th centuries as classic cases that illustrate how autocracy interacts with economic development.

Our work shows how differences in political institutions in Germany and Russia impacted a particular subset of large, complex firms with an important economic impact: industrial corporations. Corporations only represented a small share of industrial establishments in both countries. As Guinnane and Martinez-Rodriguez (2020) emphasise, a more comprehensive comparison would consider firms of several enterprise forms. We begin with corporations given the rich data available that describes them and their economic importance.

The German and Russian cases have shared characteristics of autocratic political regimes, a civil law legal system, and late industrialisation. However, they differed in their degrees of political and economic openness. While Germany unified in 1871 into a federation of states under a monarchy (Kaiser Wilhelm I and then Wilhelm II as of 1888), it also operated a partially representative bicameral parliament (Reichstag and Bundesrat) with increasingly powerful legislative authority.  Meanwhile, the Russian Empire experienced few political reforms diminishing the Tsar’s absolute power, though the 1905 Revolution resulted in the creation of the Duma, a parliamentary body with limited authority. Both countries industrialised later than Great Britain, but the German economy developed earlier and much more rapidly than Russia’s did. Germany’s political openness may have contributed to its economic success, even if the causality worked in both directions.

Evaluations of the pre-revolutionary Russian economy have stressed two important distortions on economic activity: agricultural institutions and inefficiencies in the industrial sector. Serfdom existed in Russia as a key agricultural institution until 1861, and when it finally ended, peasants still struggled to relocate to parts of the Russian Empire where they could have been most productive (see e.g. classic writings by Alexander Gerschenkron (1962) and Markevich and Zhuravskaya (2018) on the effects of ending serfdom, and Buggle and Nafziger (2021) on the persistent effects of serfdom for the Russian economy).

Restriction on the formation of certain firms, as well as cartelisation of the industrial sector through ‘syndicates’, also likely distorted Imperial Russia’s economic development. Cheremukhin et al. (2017) stress distortions in the industrial sector when analysing efficiencies in the imperial Russian macroeconomy. Those distortions could arise from anticompetitive practices, and also through the government’s restrictions on corporations, which could only be formed with special permission from the government. Gregg (2020) shows the impact of this concession system of incorporation on factory productivity and technology.

The German case attracts attention for providing a model of a highly functioning corporate financial system and industrial economy, both of which developed earlier and more quickly than Russia’s.  Germany simultaneously built a much more liberalised political economy relative to Russia’s, notably having instituted ‘free incorporation’ in the 1860s in Prussia and in the 1870s in the rest of the German empire. With the creation of the central bank (Reichsbank) in 1876, joint-stock banks shifted their focus from currency to investment activities. Under free incorporation, the support of joint-stock banks, and shareholder protections were formalised in 1884, Germany developed a sophisticated corporate financial sector, stimulated waves of incorporations, and a burgeoning stock market during the imperial era (Fohlin, 2007). Like Russia, the German industrial sector was also quite cartelised. 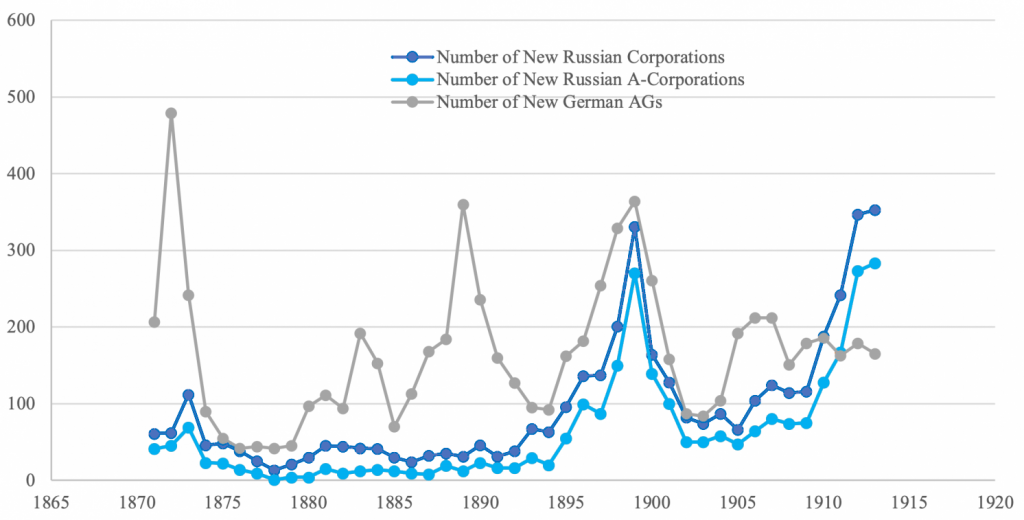 Comparing corporations in Germany and Russia

Our project compares corporations under two industrialising autocracies (Fohlin and Gregg 2022). We hypothesise that the stricter autocratic regime of the Russian Empire influenced the number and characteristics of industrial corporations, compared to those formed under the more liberal regime in Germany. Though establishing a causal channel is challenging, we verify whether the characteristics of German and Russian corporations are consistent with the contrasts we emphasise in the two countries’ political institutions. To start, an important difference between Russia and Germany was the overall size of the corporate sectors in each country. Though Russia eventually caught up to Germany in the number of new corporations organised, the total population of German corporations (Aktiengesselschaften) exceeded that of Russia.

Our main contribution, however, is to move beyond simply counting companies and look within those companies using micro-level data. For Germany, we obtain financial information from a representative sample of over 300 companies from 1895 through 1912, matched over time. The database describes these corporations in impressive detail: we have information on location, year, industry, bank interlocks, financial statements, stock market listings, and share prices. For Russia, we have a population of almost 2,000 companies, also matched over time, describing the 1899 through 1914 accounting years. The information for Russian corporations is less detailed, yet we still know a great deal about how these corporations were financed. To make comparisons between corporations in these sources, we sort the corporations into newly derived industrial categories that describe corporations in both countries, and we reconstitute relevant financial variables to permit apples-to-apples comparisons (see Fohlin and Gregg 2022 for additional detail). 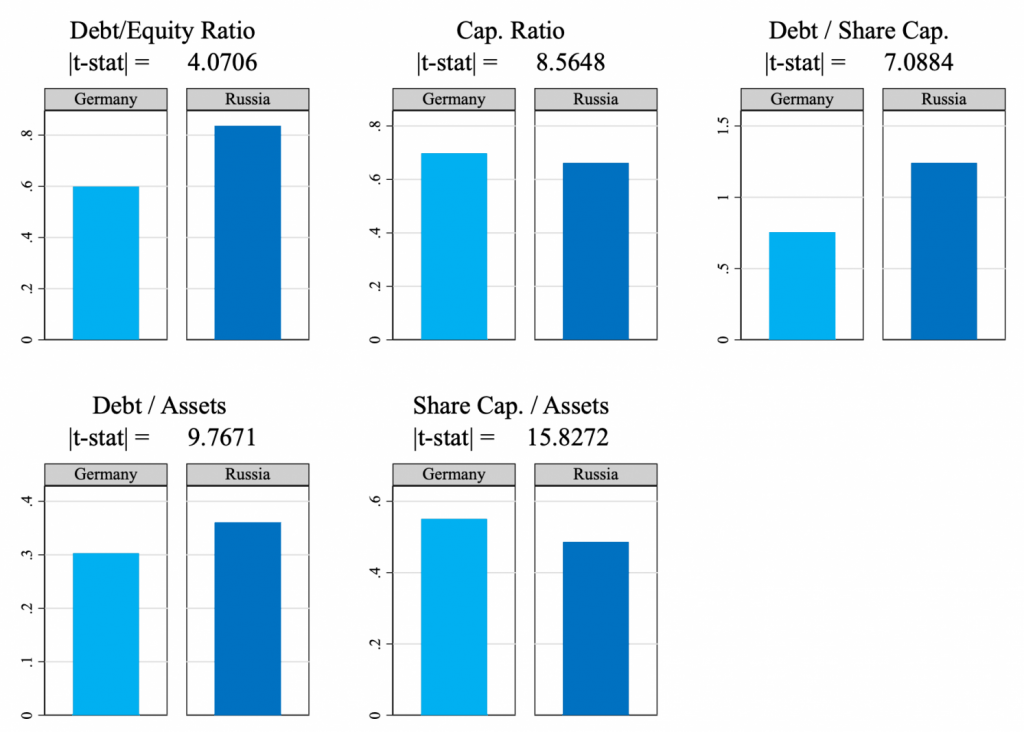 Notes: Source for Germany is Fohlin’s panel of German corporations. Source for Russia is Russia, Ministry of Finance Yearbooks (1900-1915). ‘T-stat’ reports the result from a two-sample t-test.

Overall, we find many similarities in the corporations we describe in Russia and Germany. Corporations in both countries operated within the framework of finance capitalism, taking advantage of the ability to trade equity and bonds on stock exchanges in major cities. However, we find important differences between the Russian and German cases, despite their similar legal institutions, which can be explained at least in part by Russia’s restrictions on the free entry of corporations. Russia had simply fewer corporations, and those corporations relied more on bank debt than equity or even bonds, given Russia’s less developed financial markets.

Comparing Russia and Germany before WWI can yield a number of insights about the mechanisms through which political regimes can influence economic performance. Though Russia and Germany both possessed civil law systems, and both industrialised relatively late, Russian corporations faced much greater barriers to entry and less access to market-based finance. This historical analysis highlights how more extreme autocracy can fundamentally distort industrial dynamics and corporate finance by favouring incumbents and limiting competition from outsiders.

Buggle, J C and S Nafziger (2021), “The slow road from serfdom: labor coercion and long-run development in the former Russian Empire”, Review of Economics and Statistics 103(1): 1-17.

Cheremukhin, A, M Golosov, S Guriev and A Tsyvinski (2017), “The industrialization and economic development of Russia through the lens of a neoclassical growth model”, The Review of Economic Studies 84(2): 613-649.

Riesser, J (1911), “The German great banks and their concentration in connection with the economic development of Germany”, No. 593, US Government Printing Office.