In the novel „Mosque of Notre Dame” (2015),[1] due to mass immigration, cultural decline and changing demographics, in a not-so-distant future France has become a totalitarian Muslim state. Sharia law has replaced the famous French “Laïcité”, all women a forced to wear the hijab and the Christian minority is persecuted once again for the first time in Europe since the reign of Emperor Diocletian.

Is this dystopian scenario only right-wing scaremongering? Or is it a rather literary yet still a fact-based warning about the potential future of Western Europe, if its nations do not change their migration-, education-, and family policy?

Regarding the question of when and whether the Islamization of Germany and Austria is imminent, the first half of article is intended to provide a brief overview of the latest empirical studies, without mincing words, but also without exaggeration. In the second half, potential demographic counter measures are considered.

According to the Federal Agency for Migration and Refugees, between 2014 and 2021 over 2.3 mln alleged “refugees” came to Germany (first and following asylum applications).[2] Around 86 percent of them were of Muslim faith, i.e., 2 mln, which is around 2.5 percent of Germany’s population in 2014.  From all the applicants only 6.3 percent were actually deported, i.e., only 147 thousand.[3]

During the same period over 263 thousand alleged “refugees” came to Austria,[4] of which only 11.8 percent (31 thousand) were deported.[5] Given that 72 percent of the asylum seekers were of Muslim faith, this results in a gross influx of 190 thousand Muslims, which corresponds to 2.2 percent of Austria’s population in 2014.

Research by Stonawski et al. (2015)[6] shows that Muslim immigrants have more children on average than their native counterparts: in Germany and Austria the fertility rate for ethnic Germans was 1.4, while it was 2.4 for Muslims. In 2022 the total fertility rate of both nations was 1.5 and 1.44 respectively.[7]

As a result, as well as due to labour immigration dating back to the latter half of the 20th century, in 2020/21 Muslims already constituted 6.6 percent of Germany’s population[8] and 8,3 percent of the population of Austria.[9]

An-Nimsā and Frankfwrt ‘am Mayin: How likely is the Islamization of Germany and Austria?

In 2019, the researchers Pierre and Alexandra Rostan estimated on behalf of the Higher College of Technology of Abu Dhabi if and when Muslims might become the demographic majority in the European countries.[12]

A similar study was conducted in 2017 by the American Pew Research Centre and it came to similar results.[13]

In the high migration scenario, by 2050 followers of Islam will make up nearly 20 percent of the populations of Germany and Austria, with 17.5 and 2.1 mln Muslims, respectively.

Moreover, using data by Destatis[14] and BAMF[15], one can estimate significant regional differences: even in the high migration scenario, Muslims will constitute only 4 percent of the population of East Germany, but nearly a quarter in West Germany (24.7 percent). In the future, this could, unfortunately, become a major political factor towards the secession of the eastern German states and a potential re-partitioning of Germany, as well as lead to the rupture of the European Union between East and West. [16]

Map 1. Muslims in the Europe in 2050: high immigration scenario and potential East-West rupture of Germany and the EU 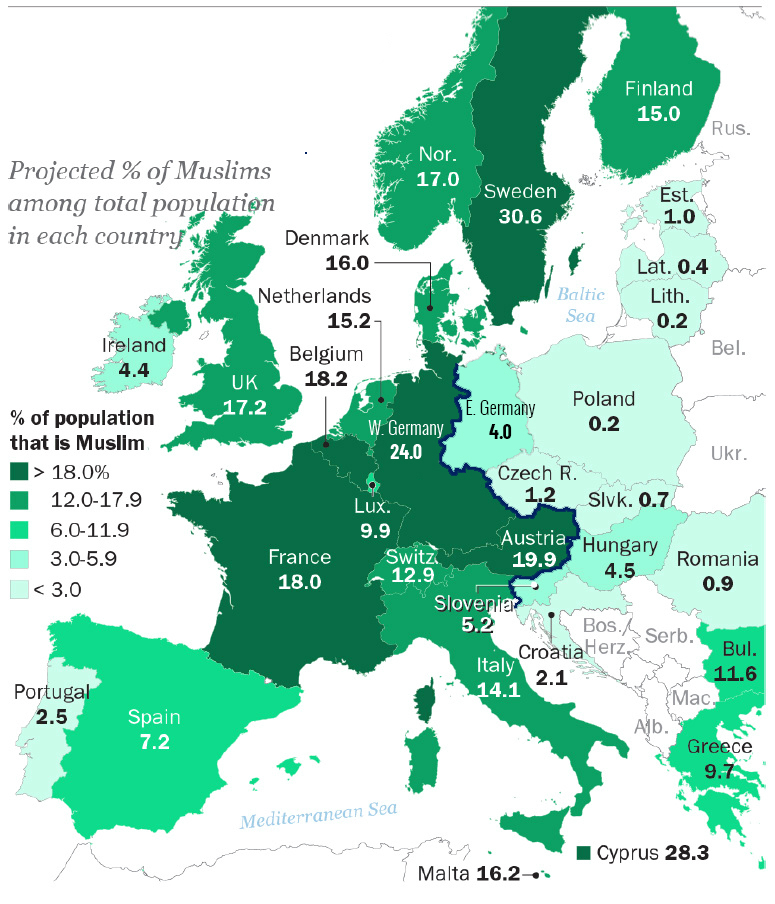 If the German federal government were to implement, on top of such a zero immigration stance, a remigration policy based on the fact, that even under current German law, less than half of the asylum seekers actually have a right to stay and are required to leave the country, then in 2050 the share of Muslims, roughly estimated, could actually be lower and constitute only 4.4 percent of the total German population.[17], [18]

However, as both studies show, if the current left-leaning governments in Germany and Austria will continue their lax migration policy, Islam will be adhered by one fifth of the population by the mid-21st century and become the majority denomination in Central Europe within the 22nd century.

Will the sharia become law?

Will Romano-Germanic national legislation, based on Christian values and the European Enlightenment, be replaced by Islamic sharia law? Under what conditions a religion becomes state-supporting – there still seems to be a considerable need for further research. But on the basis of two comparisons one can possibly approach this question:

In 380 AD emperor Theodosius I declared Christianity the official state religion of the Roman Empire. According to estimates by historian Peter Turchin (2016), at this point Christians made up 76.3 percent of the Empire’s population, the clear majority.[19]

In current times, sharia legislation, which is binding to all citizens, is implement in 15 countries around the world, which all have clear Muslim majorities (above 90 percent of population). However, there are 32 countries, which have implemented a “dual legal” system, where Islamic sharia law is applied to Muslims by confession or in certain sub-national regions. In countries such as Thailand, Kenya, Uganda, India, Israel and Ghana this is the case and only 5,4 to 19,9 percent of the population there adheres to Islam.[20] Therefore it is quite imaginable, that under the continued mass immigration scenario, Sharia law might be implemented as a parallel legal system or in certain cities and federal states, where Muslims have become the absolute majority, i.e. in Vienna or Nord-Rhine-Westphalia, where in 2021 Muslims already constituted 11.2 and 31 percent of the regional population, respectively.[21]

Can the European patriots avert such a prospect and preserve the autochthonous cultural identity of Germany and Austria in the future? Should right-wing parties, such as the AfD and the FPÖ, (again) be trusted with government responsibility, they would have to implement a broad and coherent policy mix.

First, as the studies by Rostan and the Pew Research Center show, a restrictive immigration policy would be necessary to halve the expansionary pressure of Islam in Central Europe. Enforcement of remigration programs can amplify the effect of such policies. Approaches such as the remigration agreement between the UK and Rwanda can serve as a model for this.[22]

Second, it is necessary to rectify the failed demographic development since the 1960s and to raise the birth rate of the autochthonous peoples again. An activating family policy is essential for this.

The empirical literature shows relatively clearly that among the state-economic measures, on the one hand, fiscal incentives – such as direct transfers, maternity benefit, interest-free family home mortgages, tax allowances and family tax splitting, as well as better conditions in the pension system – and, on the other hand, improved provision of childcare are the most effective instruments to boost childbearing.[23]  A detailed evaluation of each of these measures according to effectiveness, costs and feasibility would go beyond the scope of this article.

Finally, for a possible right-wing government, it would be no less important to address a third aspect which, due to the overall socio-political overtone having shifted far to the left, unfortunately hardly gets the scientific and policy attention it deserves: the reconstitution of traditional Christian family values. Because exactly such a development, it seems, would have the strongest positive effect on domestic demographics.

Research by Hayford et al. (2009) from the Arizona State University shows that somewhat religious Christians in the United States have 15 percent more children than their non-believing counterparts, and very religious Christians have 35 percent more children on average. Holding traditional family values increases the number children by a further 6 percent.[24] Similar research by the US-based Institute for Family Studies (2022) shows that the fertility rate of non-believing Americans is 1.3, while it is 2.2 with practicing American Christians.[25]

Using these findings and combining them with fowid’s religiosity survey, one can estimate that expanding the number of practicing Christians from 1.6 to 90 percent of the German population (with a Muslim share of 9 percent) would raise Germany’s total fertility rate from 1.5 to 2 or even 2.2.

Examining the relationship between Christian religiosity (traditional family values) and childbearing in Austria, professor Guido Heineck from Bamberg University (2012) [26]  and the Wittgenstein Centre for Demography and Global Human Capital (2021)[27] came to similar conclusions: Austrian Christians on average have a fertility rate of 1.5, while it is only 1 with non-denominate Austrians. Strong Christian believers tend to have a fertility rate of 1.8, while it is 0.9 with atheists. Accordingly, increasing the share of practicing Christians in Austria to 91 percent of the population (with, again, 9 percent Muslims) would lift the country’s total fertility rate from 1.44 to 1.9. Moreover, Christian women in Austria, who frequently go to church, want to have 2.4 children on average, which means that increased fiscal incentives and better childcare provision could even push Austria’s total fertility rate up to 2.4.

The question is of course, if such a religious revival, one could call it a “Conservative Revolution”, would be even possible in the postmodern West of the 21st century.

The Look East might offer a glimmer of hope here.

In the Eastern European countries, the current proportion of Muslims is not higher than 0.4 percent and will not be more than 4.5 percent in the year 2050, even in the worst-case scenario.[28]

Between the years 2000 and 2020 Eastern European countries such as Russia, Georgia and Hungary were able to actually increase their national fertility rate: in Russia from 1.2 to 1.5 (reaching a high-point of 1.8 in 2016, indicating that the re-decline in recent years rather due to sanctions); in Georgia from 1.6 to 2 and in Hungary from 1.3 to 1.6, where the increase began in 2010, i.e. with Victor Orban’s second Christian conservative government.[29]

Analysis by Stone L. (2017) from the Institute for Family Studies shows that the Orthodox Church and Patriarch Ilia II personally played a vital role in boosting Georgia’s fertility rate by 0.5.[30]

Even within Germany and Austria one can look to the more traditional Orthodox Church as a possible beacon of hope for a revival of spiritual meaning and conservative family values. While the number of members of the Protestant and Catholic churches in both countries has been declining for decades, the trend among the orthodox Christians is the opposite: in Germany their number has more than doubled from 1.3 million in 2013 to 3 million in 2021 and in Austria between 2001 and 2021 it increased by a factor of 2.4 from 180 to 437 thousand.[31]

[3] Compiled by the author based on answers by the federal government on several written inquires by the Linke parliamentary group in the German Bundestag.

[5] Compiled by the author based on newspaper articles by the Austrian press and answers by the federal government on several written inquires by the FPÖ parliamentary group in the Austrian Nationalrat.

[12] Rostan P., Rostan A. (2019). When will European Muslim population be majority and in which country?

[16] The author hereby emphasizes that he is in no way supporting this potential scenario, but, on the contrary, is expressing his fears.

[26] Heineck G. (2012). The relationship between religion and fertility: Evidence for Austria. University of Bamberg. URL: https://www.uni-bamberg.de/fileadmin/uni/fakultaeten/sowi_professuren/vwl_sozialpolitik/Dateien/Forschung/HO-accepted.pdf | Adjusted for 2021.