Despite facing many of the same challenges, Germany’s current macroeconomic policy is substantially different to those of other countries, in part due to the economy legacy of Walter Eucken. This column considers the economic policy of Hjalmar Schacht, whose ‘MEFO-bills’ monetary solution ended the years of economic struggle caused by the Treaty of Versailles’ reparations commitments. By tying the bills to output, Schacht was able to stimulate output, and eliminate unemployment. This historical implication has clear modern-day implications, with parallels to ‘helicopter money’ policy and Italy’s recent ‘fiscal money’ proposal.

In a very enlightening Vox column, Bofinger (2016) explains why the macroeconomic debate and macroeconomic policy in Germany differ so widely from other countries, despite the same academic textbooks and models being used as elsewhere. Bofinger traces the root of the difference to the deep influence the paradigm of macroeconomics developed by Walter Eucken (1891-1950) has had on the German formal theoretical apparatus, and to his living heritage. Eucken’s focus on balanced budgets, price stability and structural reforms, and especially his neglect of aggregate demand explain German economic policy in Germany as well as at the European level.

As Bofinger well characterises it, Eucken’s vision of the German economy was – and remains – one of a relatively small-open economy which relies on the rest of the world to sustain its aggregate demand. But what is rational for a small economy may turn out to be irrational for a large one.1 If Eucken’s vision epitomises the economic success of Germany, its underlying fallacy of composition exemplifies as much the failure of the Eurozone – a large economy that, thinking of itself as small, refuses to use its internal potential to propel growth, and yet it is too large to piggyback on the rest of the world, especially when the latter gets weak and slow. As a result, the Eurozone has deprived itself, and the world, of the full use of its very powerful economic engine, most notably when using it could prove beneficial to all.

Eucken’s paradigm – antipodal to Keynes’ – grew out of (and found support in) the dramatic experience of Germany with Nazism in the years 1933 to 1945. In displacing that experience from the collective psyche of the country after the war, and in the process of re-establishing the country’s political and intellectual foundations, it was natural for a re-born Germany to accept Eucken’s negative message on a supposedly direct line, running from the ‘full employment policy’ of the 1930s to price controls, rationing, a corporative structure of the labour market, and central planning.

Unfortunately, removing the Nazi experience and all that was associated with it also caused the complete disregard of another major German lesson, that of Hjalmar Schacht, the maker of the formidable German economic rebound from the depression of the 1930s. While initially a supporter of Hitler and the Nazi Party, and serving in Hitler’s government as President of the Reichsbank and Minister of Economics, Schacht eventually developed serious concerns about German re-armament policy and its effect on the economy. He clashed with Hitler and was thus dismissed from his duties just before the beginning of the war. After the war, Schacht was tried at Nuremberg and was acquitted and cleared of all blame for rearmament and inflation. However, he was later tried and sentenced by a German denazification court to eight years in a work camp. Since then, nobody wanted to remember him, let alone rehabilitate his name, and his great lesson was all but forgotten.

Time should help us tell the good from the bad, out of even those very bad times. In any case, it is not our intention here to come to a judgement of Schacht’s political conduct, but simply to consider his policy programme for an economy trapped in deep depression with no fiscal space.

The economics of Hjalmar Schacht: A needed re-evaluation

In 1921, in the aftermath of the Treaty of Versailles, war reparation obligations upon Germany amounted to 33 billion US dollars. Keynes (1920) strongly criticised the Treaty. It did not include any plan to revamp the economy, and the punitive attitude and economic sanctions of the major powers against Germany, as he predicted, would lead to new conflicts and instabilities, instead of seeking to secure long-lasting peace. The reparations were in fact at the origin of the cataclysmic events that followed – from Weimar hyperinflation (1921-1923) to the dramatic austerity of the Bruning government (1930-1932). The resentment that all this created in the German people manifested itself in the huge support that Hitler’s National Socialism received in the whole country (Ruffolo and Sylos Labini 2012).

As Hitler rose to power, in January 1933 the economic situation in Germany was dire. Stocks of raw materials had been depleted, factories and warehouses lay empty, and about 6.5 million people (about 25 percent of the domestic workforce) were unemployed and on the verge of malnutrition, while the country was crushed by debt and its foreign exchange reserves approached zero.

Yet, from 1933-1938, thanks to Schacht, the economy recovered spectacularly (Figure 1).2 Schacht’s objective to jumpstart the moribund economy required money. But money was not available, since savings were inexistent and production was so restricted that savings would not accumulate (Schacht 1967). Neither could money be printed, since lending to the government would have put the Reichsbank at risk of losing control of monetary policy.

Schacht then contrived a brilliant unconventional monetary solution. For payments, state contractors and suppliers received bills of exchange issued by a company called ‘MEFO’.3 The MEFO-bills were state guaranteed, they could circulate in the economy and could be discounted by their holders at the Reichsbank in exchange for cash. 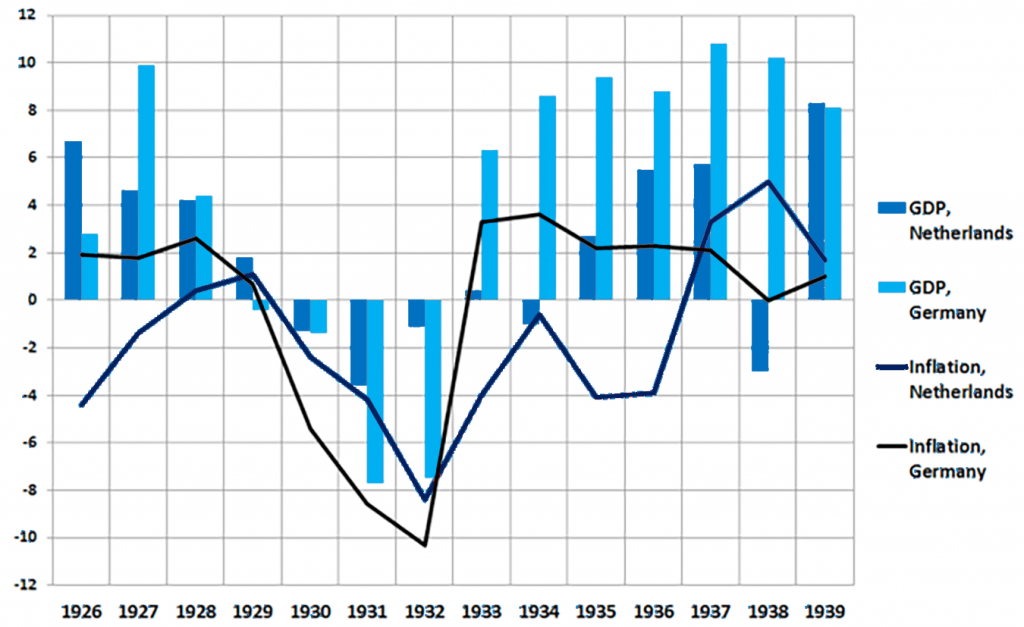 Schacht believed that the duty of the central bank was to make available to the economy as much money as necessary to facilitate output production. The issuance of bills of exchange was instrumental to this end – as each bill stood against the sale of newly produced goods, and each issue of money was based on the exchange of the new goods, central bank money issuance against bills could not be inflationary. Indeed, the employees of MEFO checked that every MEFO-bill issued was tied to a quantity of newly produced goods, and only bills issued against the sales of these goods were granted. This way, the circulation of money and the circulation of goods remained in equilibrium.4

The Reichsbank undertook to accept on demand all MEFO bills, irrespective of their size, number and due date, and to exchange them for money. The bills were discounted at a 4 percent interest rate. As such, they were given the character of interest-bearing money, and banks, savings banks, and firms could hold and use them exactly as if they were money. If all MEFO-bills had been presented for discount at once, inflation would have resulted. But this did not happen – making the bills both re-discountable and interest-bearing allowed for much of them to be absorbed by the market without going through the Reichsbank.5 Also, output responded remarkably well. State purchases fed into a growing demand for labour, and firms restarted investments using MEFO-bills as collateral for borrowing. Investments put additional manpower to work, and incomes and savings increased as a result, raising fiscal revenues (Guillebaud 1940).

In 1938, Schacht strongly urged terminating the MEFO programme, as full employment had been reached and the closing output gap was raising price tensions (Toniolo 1988).6 He clashed with Hitler on this, and on 19 January 1939 the Führer removed him from the Reichsbank.

Such was the economic policy that allowed Germany to regain monetary sovereignty and finance its reconstruction in the interwar period – an ante litteram case of unconventional money-financed fiscal expansion. It enabled a national economy to exit a long and deep depression, and to attain non-inflationary full employment in a short span and with no use of price controls or rationing (Stucken 1953).7 In only five years, Schacht’s programme transformed a bankrupt state into Europe’s strongest economy (Emry 1982).

It is quite unfortunate that Schacht’s lesson was lost while Eucken’s paradigm carried the day. Schacht’s programme resembles a variation of the ‘helicopter money’ policy and its free-lunch effects (Bossone 2016), which several economists today consider an effective demand management tool for fiscally constrained economies trapped in deep depression.

The ‘fiscal money’ proposal launched in Italy by Cattaneo and others,8 whereby special Tax Credit Certificates would be issued by Eurozone crisis countries (in line with the EU fiscal rules) as quasi-money, claims that it would add to the economy’s purchasing power, stimulate output and employment growth, and raise fiscal revenues. It draws inspiration from Schacht’s MEFO-bills (although it also features important differences).

Bofinger’s (2016) contribution offers an excellent opportunity to contrast two important economic lessons from Germany. One – from Walter Eucken, still celebrated – has served Germany well but has proven dramatically unfit for Europe. The other – from Hjalmar Schacht, removed from memory – was a success, and should inspire Europe as it deals ineptly with its worst crisis since the 1930s.

Blanchard, O (2016), “How to Teach Intermediate Macroeconomics after the Crisis?”, Peterson Institute for International Economics, 2 June

Guillebaud, C W (1939), The Economic Recovery of Germany from 1933 to the Incorporation of Austria in March 1938, Macmillan and Co.

Mahe, E (2012), “Macro-economic policy and votes in the thirties: Germany (and The Netherlands) during the Great Depression”, Real-World Economics Review Blog, 12 June

[1] “I was struck by how many times during the crisis I had to explain the ‘paradox of saving” – recalls Blanchard (2016) – “and fight the Hoover-German line, ‘reduce your budget deficit, keep your house in order, and don’t worry, the economy will be in good shape’”.

[2] In the initial phase, the recovery was not driven by the military industry and the output response was particularly strong. The leading industries were in the construction, automobile, and steel sectors. Thanks to the launch of large public works and the building of the country highway network, constructions recorded the fastest absorption rate of employment (209%), followed by the automobile industry (117%) and steel (83%).

[3] MEFO stood for Metallforschungsgesellschaft (Metal Research Company), a private empty-shell company with paid-up capital of 1 million marks. It was co-owned by Siemens, Gutehoffnungshutte, Rheisenstahl and Krupp, in whose names the bills were issued, so as not to weigh on the fiscal budget.

[4] Under Reichsbank regulation, the bills had 3-month maturity and could be renewed 19 times for a 5-year period. This was necessary since economic reconstruction would require a number of years.

[5] The bills became a sort of fiduciary money flowing between firms. They were used for 4 years and reached a volume of 12 billion marks by 1938.

[6] Schacht’s decision was also due to the fact that the conversion of MEFO-bills at the Reichsbank was putting pressure on the money supply, since banks were facing higher demand for loans while savings were drying up.

[7] The money created against the MEFO-bills issued did not produce the inflation that classical theory – then as much as now – would have predicted. Supply and demand grew in parallel, leaving prices unaltered.

[8] See Bossone et al. (2014). For a concise description of the proposal, see Bossone et al (2015). Fiscal money can be defined as “any claims, private or public, which the state accepts from holders to discharge their fiscal obligations either in the form of rebates on their full value (tax discounts) or as effective value transfers to the state (payments). Fiscal money claims would not be legal tender, and could not be convertible by the state in legal tender. However, they could be negotiable, transferable to third parties, and exchangeable in the market at par or below par with respect to their nominal value”. (Bossone and Catteneo 2016).