An increased supply of workers reduces the automation innovations of German companies. The strength of the effect depends largely on the general labour market situation, with regions with a tight labour market reducing their innovation performance most significantly.

Are humans and machines substitutes?

For decades there has been a theoretical debate about whether the supply of labour can influence entrepreneurial investments in labour-saving innovations (Habakkuk 1962, Hicks 1932). In a more recent theoretical contribution, Acemoglu (2010) suggests that labour shortages can induce technological progress if the new technologies have a strong labour-saving effect. The substitutability between labour and capital should be particularly effective in economic areas in which automation innovations are technically feasible and increase efficiency, for example in mechanical engineering.

Despite the economic and social relevance of the topic, empirical studies on the reaction of automation innovations to changes in the labour supply are sparse. The few existing empirical studies come from US contemporary history and their results remain contradicting: San (2019) finds increased invention activities in US agriculture due to the labour shortage after the exclusion of Mexican guest workers in the 1960s. In contrast, Doran and Yoon (2019) find a positive correlation between the large influx of low-skilled workers into the USA at the beginning of the 20th century and the general rate of innovation.

In addition, there is an established literature on the role of factor equipment on the introduction of existing technologies in production processes (e.g. Zeira 1998). Previous research suggests that companies absorb changes in regional labour supply through the use of more cost-efficient production technologies (e.g. Clemens et al. 2018, Dustmann and Glitz 2015, Lewis 2011). We complement these results and show that companies not only adopt new technologies, but also develop them themselves, which is proven by increased patenting activities in the field of automation.

In the paper “Labor Supply and Automation Innovation” (Danzer, Feuerbaum and Gaessler 2020) we provide initial indications of the causal effect of the regional labour supply on automation innovations in companies – i.e. on the development of labour-saving technologies.

An empirical test: How does the labour supply affect automation innovation?

To identify this, we rely on exogenous variations in the immigration of repatriates in the 1990s and 2000s, which were distributed across German regions in a quasi-experimental manner. After the collapse of the Soviet Union, around 2.5 million emigrants came to the Federal Republic of Germany between 1990 and 2006. Most of the new German citizens came from the lower end of the qualification distribution and competed with local workers for predominantly manual jobs with low demands on professional qualifications. In order to ensure a more even distribution of these immigrants across the regions, most of the German federal states introduced an allocation policy that became binding in 1996/97. We use this allocation policy to estimate the effect of positive labour supply shocks on innovations in automation; in doing so, we avoid potential distortions that would arise if immigrants were able to choose certain regions as their place of residence. The exogenous distribution of migrants across Germany thus offers a unique analysis framework for causal conclusions.

We analyse the effect of the labour supply on automation innovations using a difference-in-differences approach. Automation innovations between regions are compared over time that have experienced different labour supply shocks. The empirical analysis is based on a newly constructed panel data set at the level of German labour market regions. Our result variables are newly created measured values of automation innovation, which are based on geocoded patent data from the European Patent Office (EP). While new patents are assigned to certain technology classes, the bibliographical information in the patent texts does not provide any information about whether or not they are automation inventions. We therefore identify automation patents by using text-based classification algorithms for all EP patent texts. Figure 1 illustrates the proportion of automation patents in West German regions in the period from 1992 to 2006. The central explanatory variable (labour supply) is operationalized as the exogenous influx of ethnic German repatriates delayed by two years divided by the total number of workers in the previous year. Regional controls include per capita GDP, the unemployment rate and precise measurements of the qualification and occupational composition of the workforce on the basis of high-quality administrative data from the Institute for Employment Research (IAB Nuremberg). By including regional and temporal fixed effects, time-invariant systematic differences between the regions and nationwide time trends for automation innovations are absorbed. For our identification, we use a spatial approach based on western German labour market regions (with the exception of Bavaria and Rhineland-Palatinate). 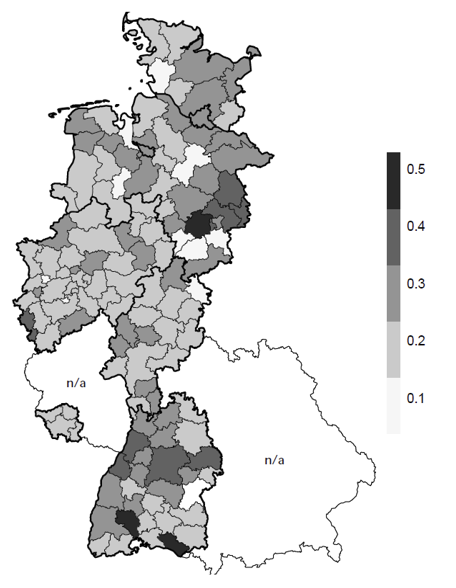 Source: Own calculations based on all georeferenced patent applications at the European Patent Office in the period 1992 and 2006.

Figure 2: Difference-in-differences estimator of the influence of labour supply on automation innovation 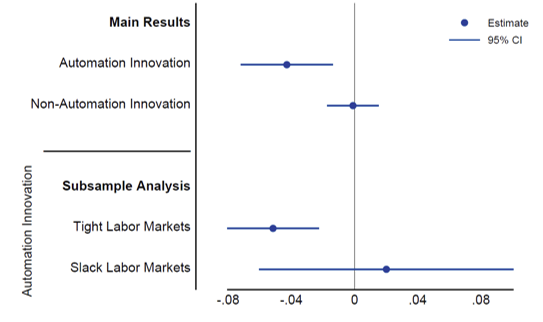 Source: Own data set based on all georeferenced patent applications in Germany at the European Patent Office in the period from 1992 and 2006, combined with regional immigration data.

The labour market as a driver or brake on innovation?

In addition, our paper is characterized by the fact that we examine the mechanism by which the labour supply influences automation innovations. Earlier studies show that the immigration of repatriates had no influence on the wage level (Glitz 2012), a result that seems plausible due to the strong labour market regulation in Germany. In order to better understand how the labour supply influences the innovation activities of companies, we consider the role of the labour market situation in a large number of heterogeneous labour market regions. Our results show that the substitution between employees and automation innovations in regions characterized by a labour shortage (tight labour markets) is significantly greater than in regions that are already suffering from unemployment (Figure 2). These results fit the assumption that labour influx eases labour shortages in stressed markets while having little impact on oversupplied markets.

The results of our paper empirically prove for Germany that an increased supply of low-skilled workers can slow down innovation activities for the automation of production steps. The strength of this effect depends on the prevailing labour market conditions, and thus the strength of the rationalization pressure on companies.

Doran, K. and C. Yoon (2019). Immigration and Invention: Evidence from the Quota Acts.

Glitz, A. (2012). The Labor Market Impact of Immigration: A Quasi-experiment Exploiting Immigrant Location Rules in Germany. Journal of Labor Economics 30(1), 175–213.

*Translated and republished without prior written consent. For educational purposes only.