A Europe of concentric rings

For a decade now, the European Union has been burdened with various systemic problems: the euro and debt crisis, the Ukrainian crisis, the migration crisis, Brexit, and lately the Corona crisis.

In this regard, discussions in political and expert circles about the potential further format of European integration have become increasingly livelier. Several potential integration paths have been presented in the “White Paper on the Future of the European Union”, which was published by the European Commission in 2017.[1]

At one end of the debate are those who see the solution in the maximum deepening of European integration, – in the transformation of the entire European Union into a full-fledged fiscal-, transfer-, debt- and political union.[2]

At the other end, there are national political forces in the member states, mistakenly called Eurosceptics, who believe that the core problem lies in the over-centralization of policy powers in the hands of Brussels. Thus, they demand to roll back what they deem “excessive” integration steps and leave only the basic achievements of European integration, which give an arguably undisputed net added value – mainly the common goods market and pan-European research cooperation.

Somewhere between these two extremes, as a sort of compromise, lies the concept of “European integration of different speeds” and of a “Europe of concentric rings”, supported by Schäuble et Lammers (1994)[3], Stehn (2017)[4] and others. It suggests that within the framework of one integration system, only those countries further deepen their mutual integration that are truly interested and ready for it. The intention being that a club of countries, by idea the most developed core countries of the integration bloc, may deepen ties and cooperation, while the other member states of the integration organization, usually the catching-up periphery countries, can join this club later when they are ready for it and willing to do so.

Arguably, the Euro area within the European Union can be considered an example of the implementation of such a “country club”[5], although many economists and politicians believe that some periphery countries have joined this club prematurely.

Critics of the concept of integration of different speeds and of concentric rings believe that it rather slows down the integration process or even legitimizes potential disintegration. In addition, this concept ostensibly removes those incentives for mutual compromise and deal-making, which would naturally arise during a bargaining process when all member states of a given integration organization have to participate in negotiations on further integration.

Then again, this approach can satisfy both the aforementioned supporters of accelerated integration, as well as the national supporters of slowing it down.

As part of this debate, the author would like to conduct a thought experiment and econometric simulation to assess the potential trade and welfare effects if France and Germany, as well as the Benelux countries, were to voluntarily unite into one single country.[6]

In our experiment, we will call this fictional new country the “Carolingian Federal Republic (CFR, Carolingia)” after the medieval pro-father of modern Europe – Charlemagne.

While such an idea may seem far-fetched, there are many indications of the predisposition of the aforementioned countries towards deeper integration. Firstly, France, (West) Germany, the Benelux countries and Italy were at the forefront of the post-war European integration project, co-founding the European Coal and Steel Community in 1952 and the European Economic Community in 1958.

Secondly, since the time of the Elysée Treaty of 1963, especially between France and Germany, a special close partnership developed. Recently, this “two-chamber engine” of European integration, as this country couple is sometimes called, has made headlines through several new and intriguing impulses. In January 2019, Paris and Berlin signed the Aachen Treaty on Franco-German Cooperation and Integration[7], in November of the same year both parties published a joint paper proposing a “Conference on the Future of Europe” to discuss potential structural reform of the European integration project and of the EU’s main policy competencies.[8] During the COVID crisis in May 2020, it were Paris and Berlin, which co-proposed a EUR 500 bln recovery fund. After tense negotiations in July of that year, this proposal became the “Next Generation EU” recovery fund of EUR 750 bln.[9] 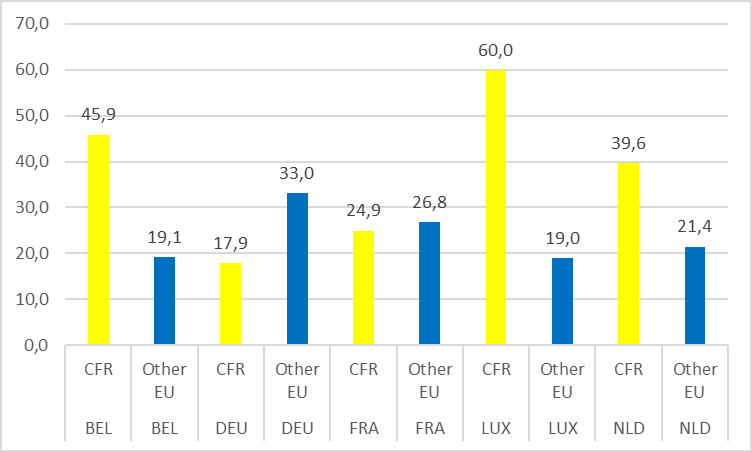 Not surprisingly, the Benelux countries have a stronger goods trade intensity (Formula 1)[10] with the hypothetical “Carolingian Federal Republic” member states, than with the rest of the European Union. For Germany and France, it is the other way around (Chart 2). 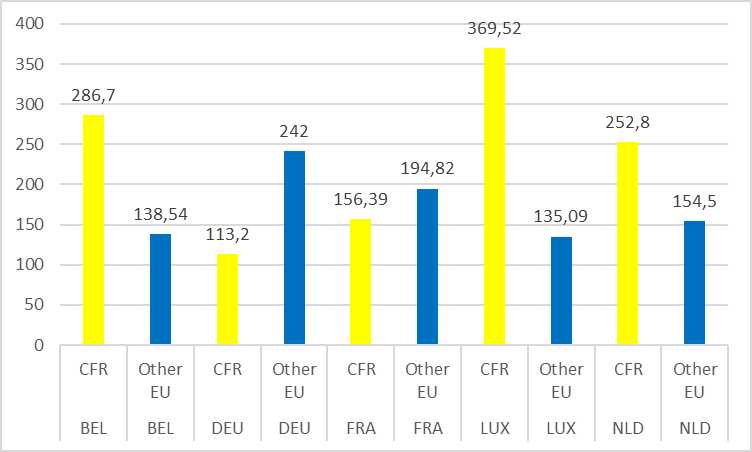 As already indicated above, the aim of this analysis is to estimate the potential trade and welfare effects of a hypothetical unification of France and Germany, as well as of the Benelux countries, into one single country. This is also to study the potential effects of applying the integration of different speeds concept on the current intra-EU goods trade structure.

In order to do this, the author will use a gravity trade model first developed by Anderson (1979)[11], and further augmented by Santos, Silva et Tenrenyo (2006)[12] on consistency with heteroskedasticity and accounting for zero trade flows; by Fally (2015)[13] on using fixed effects to match multilateral resistances consistent with structural terms; and by Anderson, Larch et Yotov (2015)[14] on using Poisson pseudo-maximum likelihood estimation (PPML). The latter also introduced a three-step estimation procedure with a baseline scenario, a counterfactual scenario, and a full endowment general equilibrium, – all of which will be applied in this simulation.

For the purposes of this model, the author constructed a new database, which includes data on bilateral manufactured goods trade flows for 169 countries in the year 2016, on bilateral distance and a  contiguity dummy, based on three different datasets provided by the WTO[15], the CEPII[16] and the United States International Trade Commission.[17],[18]

Where Xij is merchandise trade flow trade flow from origin i to destination j; DISTij is the population-weighted distance between i and j; CNTGij is a contiguity dummy; BRDRij is a border / international trade dummy; BRDR_CRFij is a dummy for the borders / bilateral trade between Germany and France (in the first scenario), as well as the Benelux countries (in the second scenario); pi  is the exporter fixed effects; cj is the importer fixed effects; eij is the error term.

The counterfactual scenario(s) is implemented by setting the BRDR_CRFij dummy to zero.

The PPM partial equilibrium estimation shows that international borders decrease global trade flows (increase trade “costs”) by 97 percent on average, while the borders between France, Germany and the Benelux countries decrease trade between them by 87 percent on average, i.e., 10 percentage points less than international borders which can be attributed to the achievements of intra-EU trade liberalization (Tables 1 and 2). Here, it should be noted that this “borders” dummy should not be equated with tariffs and traditional non-tariff trade barriers alone, but rather with all un-accounted for differences and barriers, which inhibit trade between separate countries, e.g., including tariffs, NTBs, but also speaking different languages, etc.

According to the results of the gravity model and general equilibrium procedure, if France and Germany were to voluntarily unite into one single country (Scenario 1), then their exports would increase by 76 and 48.4 percent respectively. The income of French manufacturers would increase by 7.8 percent, that of German producers by almost 3 percent. Thanks to greater competition, French and German consumers would also benefit from lower prices. As a result, thanks to a hypothetical Franco-German unification, Germany’s real GDP would increase by 6 percent, that of France by 25.6 percent (Chart 3). 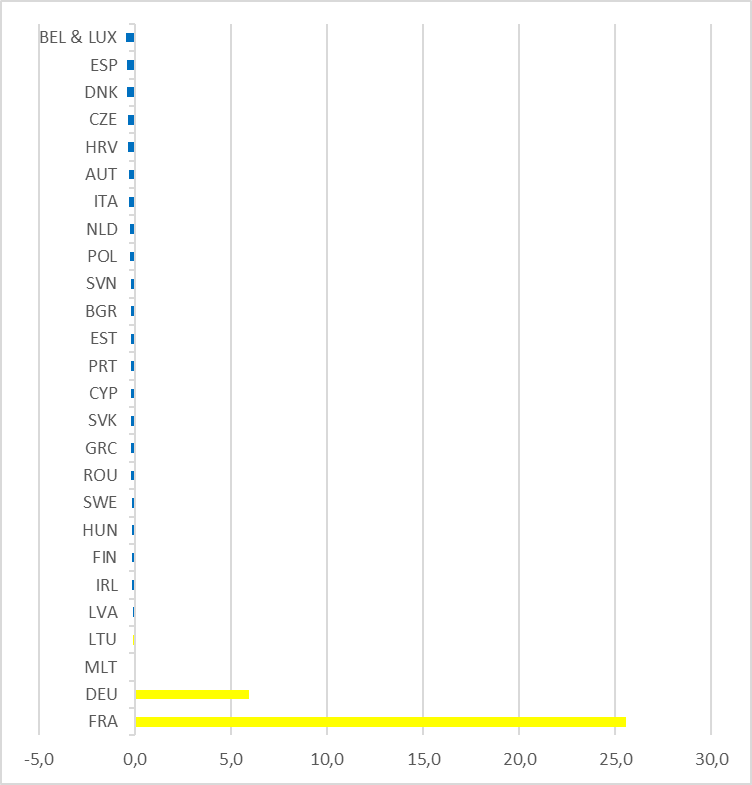 Source: Gravity and general equilibrium estimations by the author. 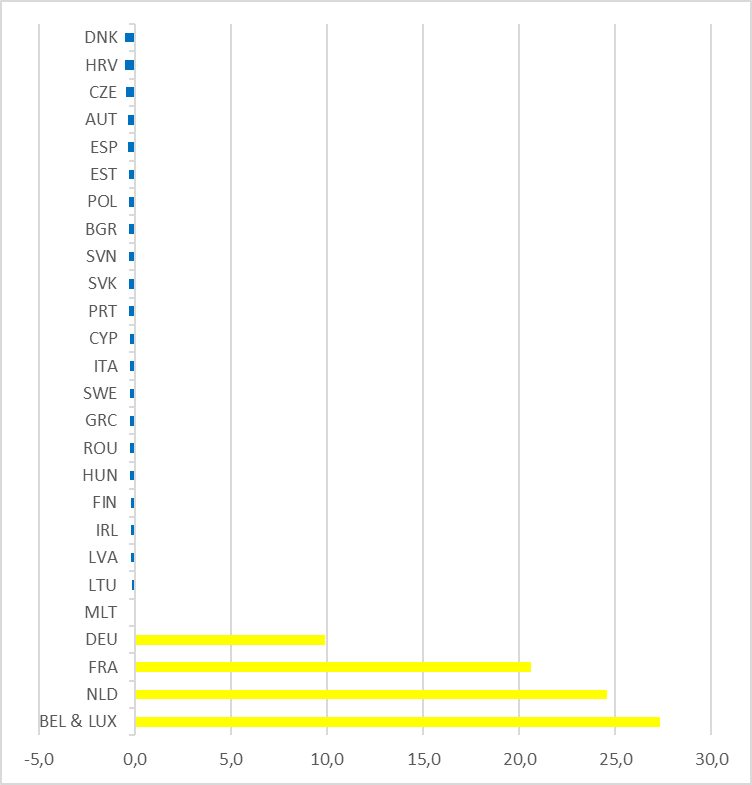 Source: Gravity and general equilibrium estimations by the author.

Since the member states of the newly created CFR would trade relatively more with each other than with countries around them, the resulting trade diversion effects in intra-EU goods trade would decrease the collective GDP of the other EU member states by 0.3 percent in both scenarios.

In the first scenario, the EU’s share in the global economy would increase from 19.7 percent to 21 percent. In the second scenario – up to 21.4 percent.

Thus, we can state two positive results from implementing the concept of European integration of different speeds and of a Europe of concentric rings: Firstly, a hypothetical voluntary unification of France, Germany, and the Benelux countries into a single country would bring them significant positive trade and welfare effects. Secondly, deeper integration of the EU’s core countries ahead of the rest of the EU would benefit the economic bloc as a whole.

[2] For the most recent developments in this trend: Kofner Y. (2021). Economic, fiscal and monetary impact of the Corona measures on Bavaria, Germany and Europe. MIWI Institute. URL: https://miwi-institut.de/archives/842

[5] For an interesting discussion on this topic: CESifo Group Munich (2018). Chapter 3: All Together Now: The European Union and the Country Clubs. In: EEAG Report on the European Economy 2018: What Now, With Whom, Where To – The Future of the EU. URL: https://www.cesifo.org/en/publikationen/2018/article-journal/chapter-3-all-together-now-european-union-and-country-clubs

[6] Before proceeding further, we would like to highlight a few key points: Firstly, in this experiment we are talking about an exclusively fictitious scenario. Its purpose is not to promote such a step, but solely to use the gravity trade model to evaluate potential effects of the concept of integration of different speeds and of concentric rings. Secondly, it is assumed that this completely hypothetical unification of France, Germany and the Benelux countries takes place within the legal framework of the European Union on an exclusively peaceful and voluntary basis, according to the mutual and democratic will of the peoples.

[8] Conference on the Future of Europe Franco-German non-paper on key questions and guidelines (2019). URL: https://www.politico.eu/wp-content/uploads/2019/11/Conference-on-the-Future-of-Europe.pdf

[10] The trade intensity index (T) is used to determine whether the value of trade between two countries is greater or smaller than would be expected on the basis of their importance in world trade. It is defined as the share of one country’s exports going to a partner divided by the share of world exports going to the partner. It is calculated as:

Where Xij and Xwj are the values of country i’s exports and of world exports to country j and where Xit and Xw are country i’s total exports and total world exports respectively. An index of more (less) than one indicates a bilateral trade flow that is larger (smaller) than expected, given the partner country’s importance in world trade.

[19] In fact, the rest of the European Union would also benefit from trade creation effects caused by the increased economic weight of the newly created “Carolingian Federal Republic” within the EU, as well as from greater contiguity with the CFR’s constituent member states.